Getting to the Great Wall was a little difficult because our handy guidebook to Beijing (written in Korean) had guided us to a particular bus stop. At that bus stop were some hawkish vendors who were offering to take us to the wall at bargain prices in their own vans. Most of the regular bus drivers were too preoccupied to help us out. 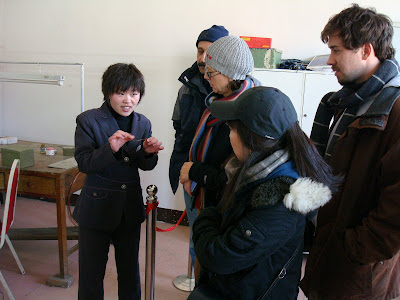 So we decided to forget that place and ask back at the hotel. We ended up choosing a Great Wall tour company called Destination Travel that were recommended by the hotel. It was only $40 per person for transport to and from the wall with commentary. Some of the vendors back at the bus stop were offering us the same trip for around $15, but if you ever visit the wall I think the wiser choice is to go with a more reputable company. Cheaper vendors have been known to ramp up the price once the journey is underway.
On the way to the wall, we stopped off at this ceramics factory, where we were shown techniques on making coloured vases and other such things. I had a very vague interest in ceramics, which was confirmed again after the tour of the factory. 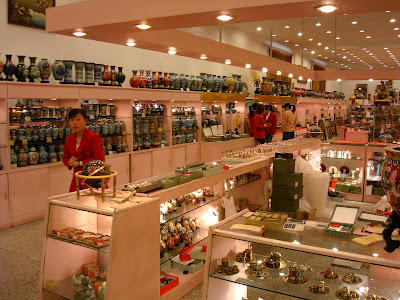 At the end of the factory tour, we were taken to this ceramics shop where we could buy produce. The factory itself was in the countryside and I think their main source of revenue comes from passing tourists. There were six of us on the tour, but the ceramics shop had 8 staff on duty who tried to coax us into buying ceramic pens, chopsticks and keyrings. I half-heartedly tried to bargain a $5 pair of chopsticks down to $1, but it didn't work. One of the other ladies on the tour bought a whole bunch of stuff though. 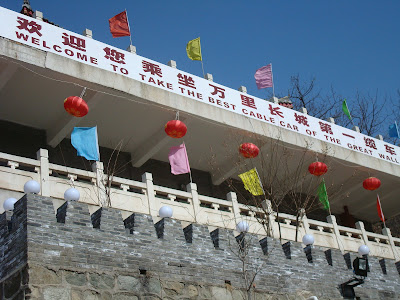 The Great Wall has a couple of focal points for tourists which are about 2 hours out of Beijing. We went to a place called Mutianyu, which has a cable car service. Luckily it was 'the best'.
I never settle for anything less. 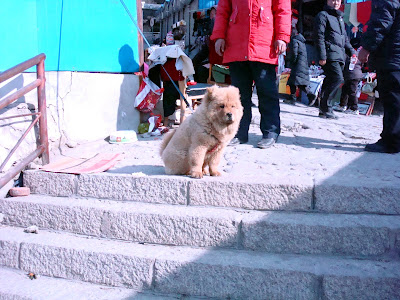 As we walked up toward the cable car, a dog that belonged to a souvenir vendor looked on. 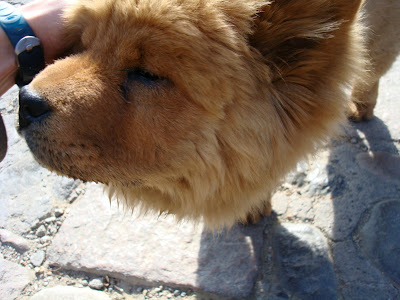 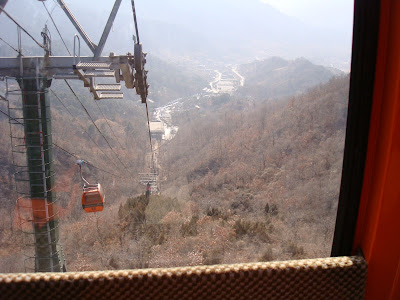 The cable car trip was quite nice. Although cable cars seem quite scary to me because I'm afraid of heights, I took comfort in the fact that they are the safest form of transport with a 1 in 1.6 million chance of being involved in an accident. Just remember that the next time you're on one. 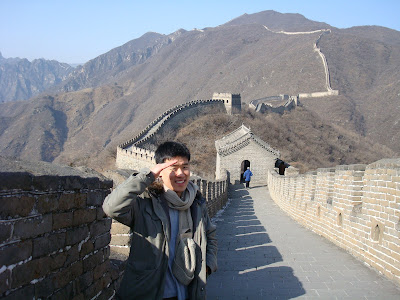 And then we were there. The Great Wall is a very long defensive wall running across the north of China for 6,500 kilometres. I'm unable to comprehend that kind of distance in my head. At the height of the Ming dynasty, more than 1 million men were employed to guard it. I couldn't help but thinking of an old Far Side cartoon where, at the completion of the wall, one guard says to another "Now this should keep that pesky dog out." 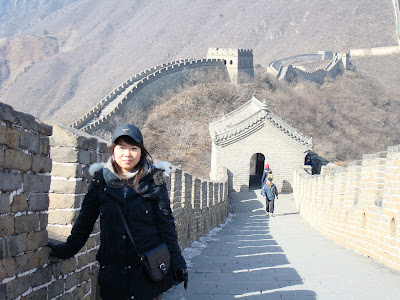 Heather makes the wall look a lot prettier than I do. On that particular day it was very cold and the winter sun was bright, making the photos pale. 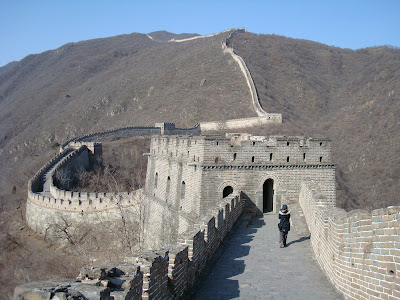 At regular intervals along the wall are defensive forts that were guarded a long time ago. Lines of communication were kept open by smoke signals from these. 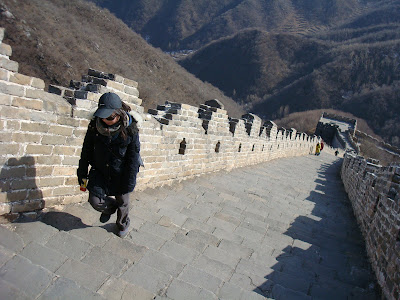 We walked for about 1 hour before reaching this super steep section. It rose up vertically for about 150 metres and took around 10 minutes to climb. By the end of it I was huffing and puffing. Apparently they built the wall with irregularly spaced steps to impede any advancing armies that managed to breach it. I guess the considerations of the tourist hordes of the future were low on their agenda. 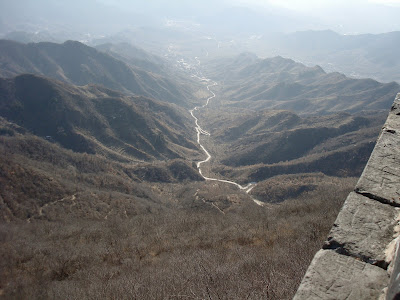 But after the long hike we were rewarded with some spectacular scenery. The mountainous terrain surrounding the wall is stunning, but completely inhospitable. It makes you wonder how anyone could comprehend attacking such a position.


Here's a video I filmed while climbing the last section. 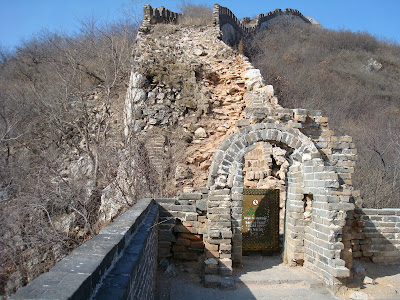 The Mutianyu section of the Great Wall was restored back to its original glory with the help of a German company. This is where the restoration stops, about 2 kilometres from the cable car station. 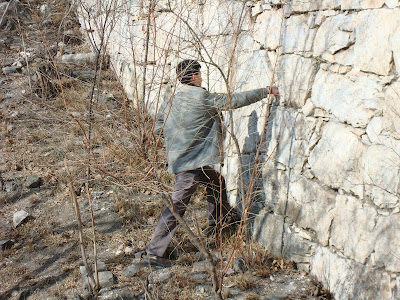 On the way back down I tested the strength of the wall. It didn't budge one bit. 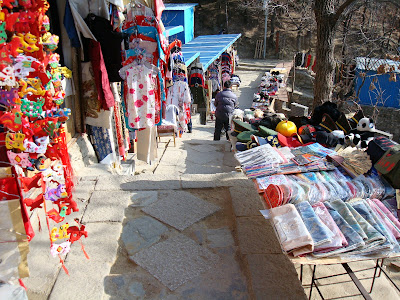 While we were walking back to our tour van we were confronted by a new wall - The Great Wall of Merchandise. A lot of these shops were selling exactly the same things, beach towels, curtains and snowglobes somehow related to the wall. One friendly female vendor with two teeth greeted us with "Hello, buy hat". 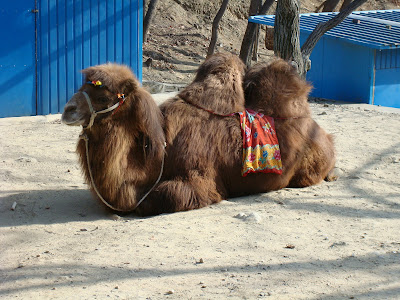 Also along the journey was this Bactrian camel. Bactrian camels are endangered in the wild now and are restricted to the plateaus of Mongolia, where they survive by eating snow. Contrary to popular belief, camel humps do not contain water, but fat which is then metabolised into energy and water. After I took this photo an old lady screamed at me that a photo of it costs 1 yuan. I was under the impression that it was within the public domain, being on the pathway and all. I would have paid if she asked nicely. 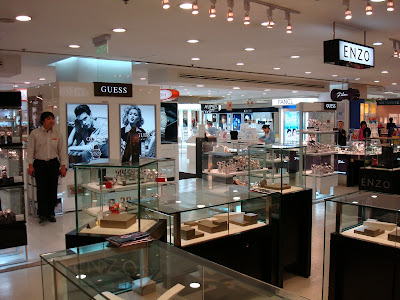 Back in the hotel we had a short rest before venturing out into the nearby shopping areas. The prices in these outlets were noticeably higher than in Korea so we refrained from buying anything. On this floor we were the only two customers in the area, with about 50 retail staff who were watching us and pretending to rearrange items on the counter. 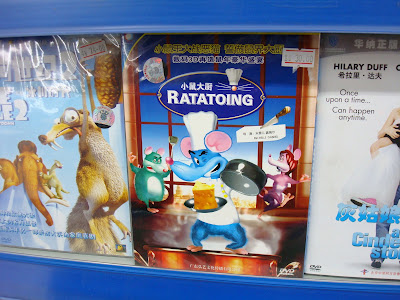 In one of the DVD shops we went to later that day, I spotted some imitation movies. Pirated movies are copied without license, but some of these movies like 'Ratatoing' (a copy of Ratatooie by Pixar), had been completely redrawn and given a similar script to capitalise on popularity but avoid legal issues. It reminds me of a similarly written Chinese Harry Potter book entitled 'Harry Potter and the Filler of Big'. 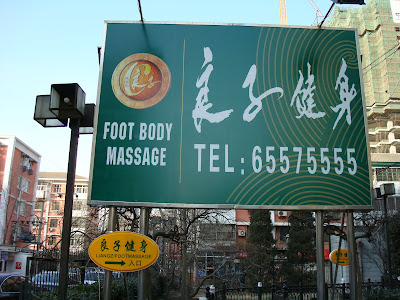 I'd never actually been to a massage parlour before. I always found the concept of someone massaging me to be a little too over-indulgent. But I gave it a go anyway. In China, a one-hour massage will cost you $20 at the more upmarket places. A policeman who seemed to be guarding the business guided us in. 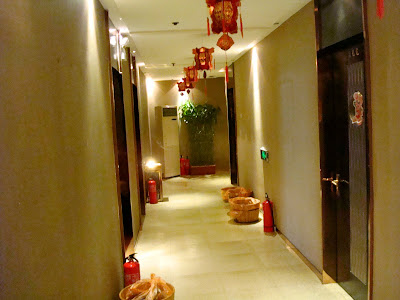 A range of different styles were on offer including foot, face and 'lymph node' massages. These buckets in the doorways were filled with scented water for the feet. We chose a general body massage which was quite enjoyable. I found it funny when the lady massaged my eyeballs. My old hairdresser in Korea used to do that too. I need to learn how to say 'Leave my eyeballs alone' in Korean. 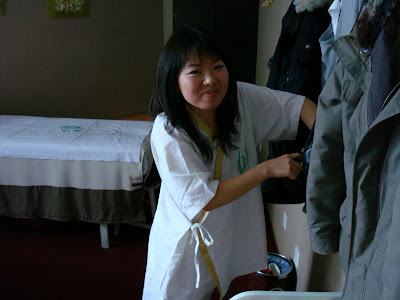 Here's Heather getting ready in her outfit. We were massaged in the same room and Heather told me what to say in Chinese if they started massaging too close to any naughty parts. But they massaged quite appropriately and the time went by surprisingly quickly. I found out that I have a ticklish spot on my back that can only be triggered with an elbow. 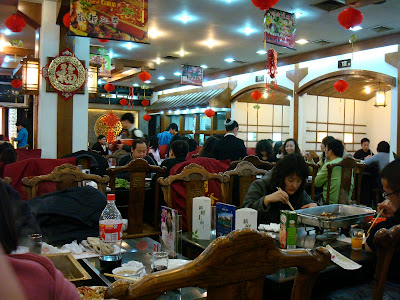 For our last night in Beijing we went to a famous hotpot restaurant that our tour guide recommended to us. It was quite busy and only 2 blocks from our hotel. 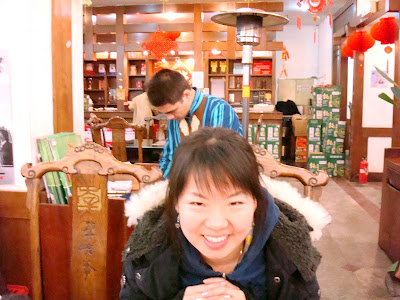 The customer service was excellent. When we asked what was in one of the dishes, the waiter behind Heather took pains to describe every aspect of the dish in minute detail. Heather is smiling in this photo because she then proceeded to practice her Chinese and inquire about each dish on the menu. The waiter diligently described every dish she pointed to and approximately 30 minutes later we had chosen our meals. 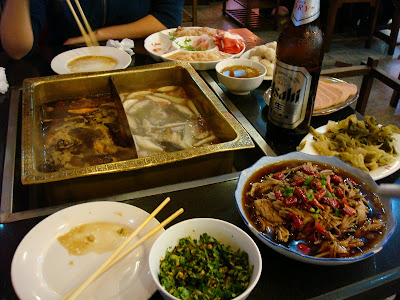 The hotpot had a divider in the middle separating regular soup from spicy stock. We went all out and ordered a whole lot of different dishes. The meats and vegetables are dipped in the stock until cooked, similar to shabu-shabu in Korea or sukiyaki in Japan. It was pretty good. 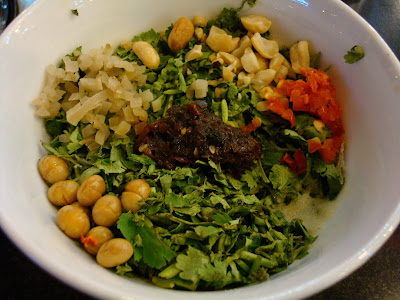 These herbs came with the meat. Korea is devoid of many different herbs, making exotic cooking very difficult. I've only seen coriander in Korea once and I've never seen Thai basil. 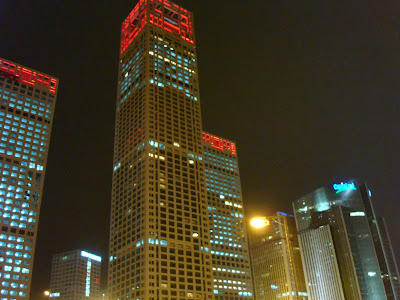 We left the hotel in the early hours of the morning to catch our flight. Beijing was an interesting city and distinctly different from Korea and Japan. 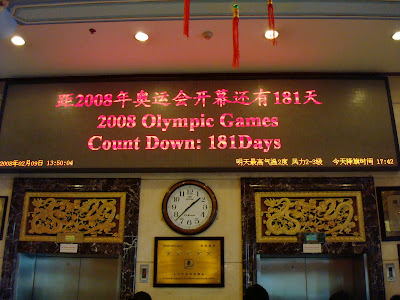 On August the 8th, 2008 at 8pm, the Olympic games will begin. Beijing has chosen this particular time because the number 8 is considered lucky in China. All across the city preparations are underway for this massive event. I'm sure it will be incredible for those who can make it over.

Well that wraps it all up for Beijing! It's definitely a destination worth visiting and a country with a promising future. I'd go back if I had the chance, but I also have Shanghai and Taipei high on the list.

For the next post we'll be back in good ol' Korea. See ya!

Wonderful pictures. Thank you for sharing them with everyone. I would love to go and look at everything myself!

Your wall photos are GREAT!
I don't nkow if you've seen mine but it was so foggy - you can barely see anything!!!