In just about every petrol station in Australia, there are a range of meat pies and pasties for sale. To a North American, a petrol station is called a gas station. This has never made sense to me, as the product being sold is actually a liquid. Incidentally, Korean service stations are often labelled here as 'Oilbanks'.

One craving that I've had that has definitely grown in its voracity has been for a nice steak and mushroom pie with plenty of tomato sauce. On occasion, I used to drop by the old BP on Prospect Road and pick one up on the way to university. Here in Korea, there are no meat pies to speak of. Instead Korea has choco-pies, which are large Wagon Wheel-like conglomerations of marshmallow and jam. I hope that such flagrant misuses of the name 'pie' shall not go unpunished. 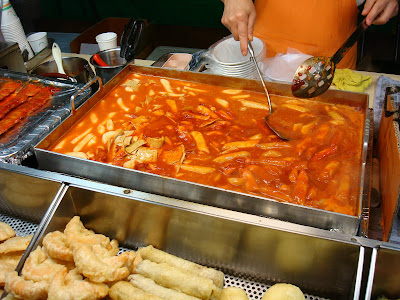 Apart from at festivals and in front of casinos, Australia doesn't have much of a street food culture. This is a little unfortunate, as often the cheapest and most authentic food in other cities is sold at street food outlets. Korea is big on street food culture, although the variety is usually limited to a couple of spicey things, things that come on a stick and some fried things. 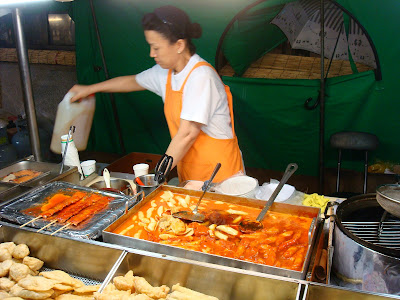 Ddeokbeokki is a popular spicy rice-cake snack here. Last week I saw it being made for the first time and was surprised by the amount of sugar syrup added. During the preparation process, this ajumma whipped out an industrial sized bottle of some maple-syrup-like glucose-derivative and glugged a good half kilo over it. 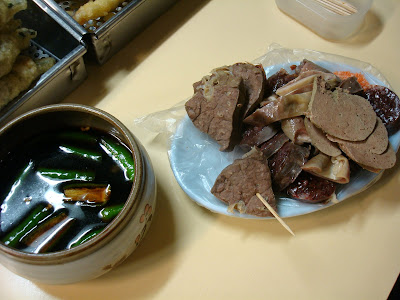 Back home, non-steak parts of a meat animal often go into sausages. Here in Korea, they're sold as delicacies. That begs the question... what goes into sausages over here? I'm not especially sure, but I have noticed that the sausages here usually taste a bit bland.

In the photo above are some various parts of an animal and dipping sauce. The meat that my toothpick is impaling is a pig's lung. I don't think I've ever eaten a lung before, but it tasted a lot like liver. When I order this kind of dish, I like to have a good poke around first and work out what anatomical curiousity I'm dealing with. 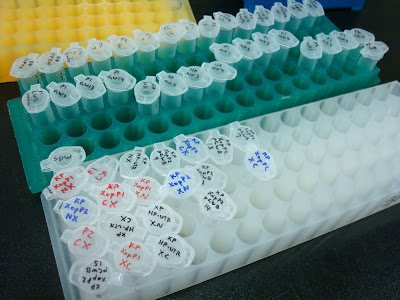 Work in the lab is moving slowly these days. I'm trying to construct some fluorescence vectors for a later experiment. In biology, a vector is what we use to describe something that can be transferred. What we do is construct a small ring of DNA in a simple bacterial species, and then transfer it to a higher organism.

And a good percentage of time in any science lab is spent labelling things. 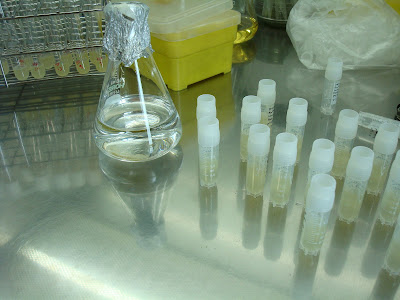 The glassy liquid in the bottle is glycerol, which we mix with bacteria in the storage tubes on the right. What then happens is that the glycerol coats the 'skins' of the bacteria and allows us to freeze them at minus 80 degrees celsius. The bacteria go into a state of cryo-preservation and can be woken up at a later date.

You know, if you have enough money you can elect to have your body frozen in a similar manner when you die. For about US$150,000 you can be preserved and the idea is that you will be resuscitated when medical technology is good enough to bring you back. There's a whole bunch of companies that specialise in this field, which is called cryonics.

While I wouldn't want to be preserved myself, I don't think it's an entirely silly idea. However, I wonder what kind of world the cryonics participants expect to wake up to. For future society, a cryonically preserved person that has been woken up would probably be more of an anthropological curiousity to everyone, would they not? Something like a woolly mammoth? How would they go about living a normal life if they had 'PREVIOUSLY DECEASED, BUT CORPSE REANIMATED' written on their resume? 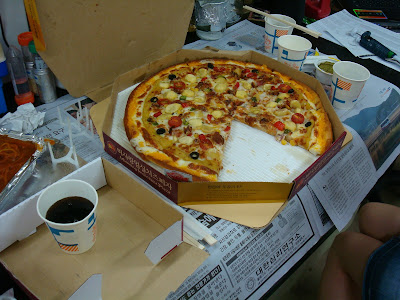 This week, the professor and the elder lab members went to Canada for a conference. That means that we had the lab to ourselves. On Thursday we ordered a pizza which was nice enough, but it can be a challenge to find a pizza here without sweet potato on it. This one also had roasted walnuts, which were a surprise. 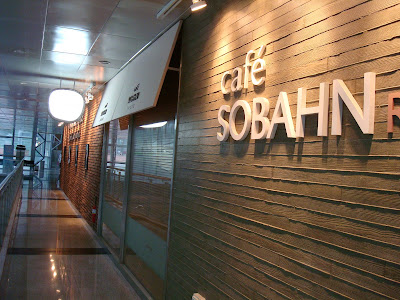 Down the road from our building is the Sobahn cafe, which I hadn't been to since arriving because it's a little pricey. To a postgrad student in Korea, pricey means anything more than five dollars. 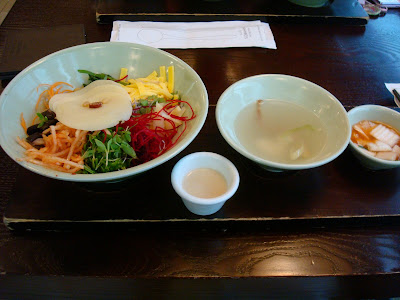 This cafe specialises in bibimbap, one of my favourite dishes. The word bibim means a mixture, and bap is rice. So it's basically a plethora of predominantly vegetarian tidbits, all mixed up into a rice salad. Simple, healthy and usually cheap.

Cafe Sobahn's was around six dollars and pretty good. But not twice as good as the three dollar ones you can get from the corner shop. 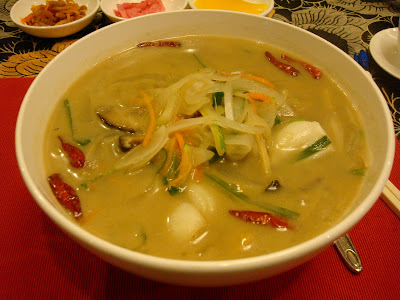 I tutor a couple of times per week these days, because I need the money. On Tuesdays I tutor a little kid called Thomas down at Seolleung station. He's a smart kid that I'll hopefully post a picture on here some time later.
Before I tutored him last week, I dropped by a Chinese restaurant in the area and ordered this white jjambong soup. Jjambong is normally red with spice, but this one was mild. 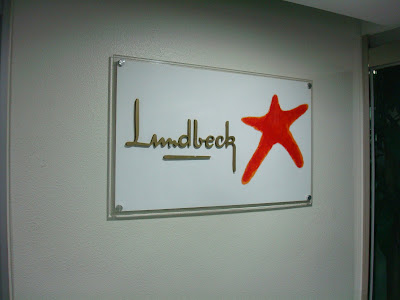 And on Thursdays I tutor up at Lundbeck near the Garak Markets. It takes me a while to get there and I usually teach for around 3 hours. Tutoring as well as doing the Ph.D does take a toll on my energy levels, but I'm also trying to save money for the honeymoon and there's never much left over from my student wage. 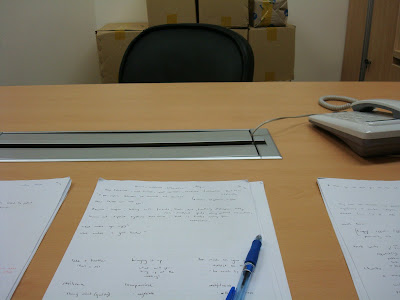 The students here are company workers and I teach them all separately. They tell me that they enjoy my lessons, which is always good to hear. Working at CDI was useful to me in this regard, it taught me how to put together a practical English lesson.
For the lesson plan each week, I print out a news article and we discuss the basic ideas and our opinions. Then I point out some specific words and phrases in the text and we talk about how to use them in different situations. Sound simple enough?

It's not always what you teach, it's the way you teach it. 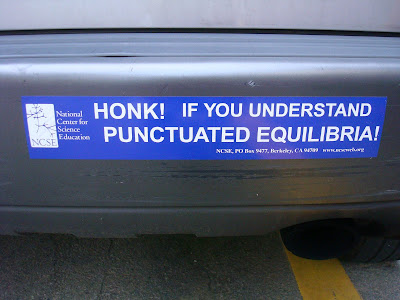 While wandering the side streets of Gangnam this week, I came across this rather bemusing bumper sticker. Punctuated equilibrium is a slight modification of the general evolutionary theory. Nothing spectacular in itself, but it's funny that someone would put it on their bumper. I can only imagine their disappointment as they drive around in a honkless environment. Perhaps that was their aim after all?

Anyway, see you next time!

... the years i've wasted pondering that one

this is Karen here.you may not remem me but we did Uni together in Adelaide many many yrs ago..hahha!
Good to see u're doing so well now and still very much in the DNA, labelling eppendorf tubes world...cool!

just wanna say HI & all the best to you!!