A Weekend in Japan Part II

After finishing up a good day in Kobe, where we also happened to find a place that was giving away free hot tea, we took the railway back to Osaka. 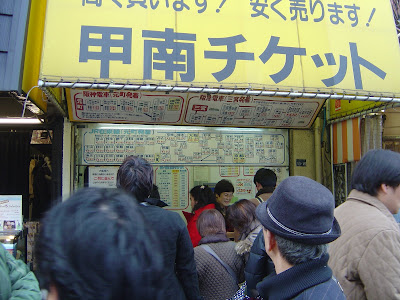 Japan Railways sell passenger tickets at discounted prices if you buy a few thousand of them at once. This has spawned a small industry of special retailers who buy large quantities and resell them to the public at a small profit. We bought our tickets from this shop and they turned out to be about 2 dollars cheaper per ticket than buying them from the vending machines. 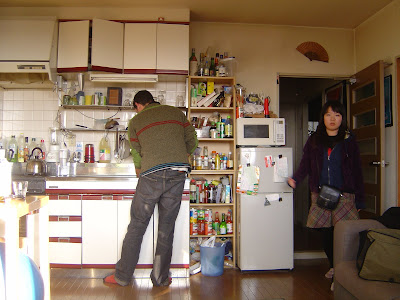 When we got back we were feeling a little tired, so Jimmy invited us back to his place to chill out for a while. We drank some coffee and played a pretty cool game with dice on the coffee table. I didn't think any sort of dice game could be entertaining, but this one was addictive. The object of the game was to make decisions and reach a certain score. I know what you're thinking, but seriously, it was good. 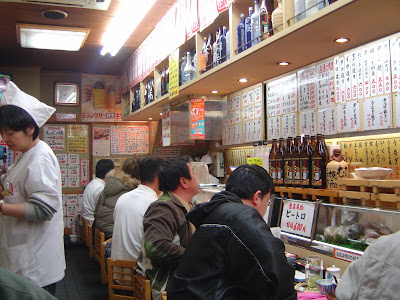 What would a trip to Japan be without sashimi? After some initial confusion about where to meet, we found my sister and she took us to a local sushi bar. The menu items were written all over the walls and the place was nice and cozy. 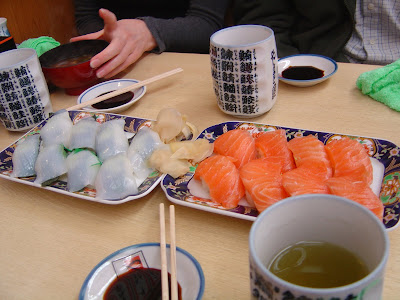 Well all I can say is that you haven't eaten sashimi until you've eaten it in Japan. The flavours of the meat are more complex and refreshing than anything I've tried overseas. The portions are cut much thicker than I expected and the wasabi is freshly ground. Chongmal masshissoyo! (very delicious!). On the table there we have some soft squid and huge slices of salmon, a popular favourite. The cups in the photo were bigger than normal, so just compare the pieces to the chopsticks. 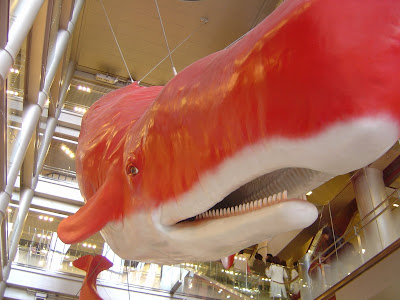 The next day we went to Hep 5, a landmark shopping centre with a ferris wheel. Upon entering the building you're greeted by this rather confronting whale sculpture hanging from the ceiling. 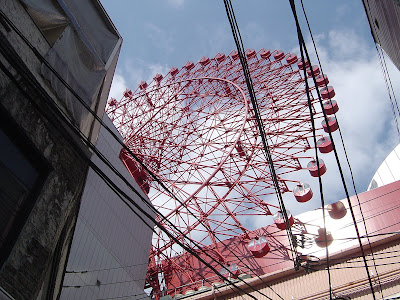 This is the outdoor ferris wheel they have at Hep 5. It's base is on the seventh floor of the shopping centre and has great views of the city. 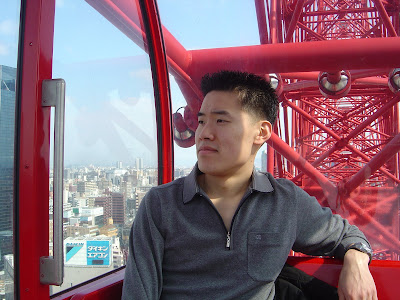 The wheel is always continuously in motion, unlike the wheels in Australia that stop to let passengers on and off. It turns slowly enough, but if you leave something in one of the carriages, you have to wait until it comes around again. 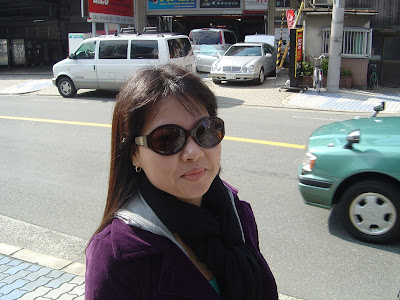 Here is the amazing insect-woman that accompanied me on my journey. In this photo we were walking in the streets between Hep 5 and the Umeda Sky Building. 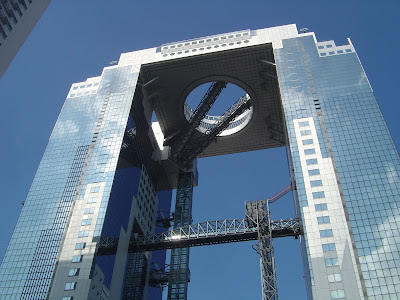 And here's the Umeda Sky Building. We saw it from the ferris wheel and just kept walking along the streets towards it until it got bigger. At the top it has a 'floating garden observatory' where you can see panoramic views of the city. Those two ramps leading into the centre circle are escalators up to it. 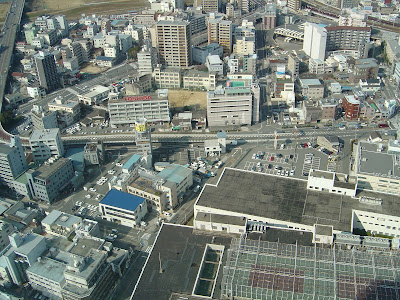 Luckily for us it was a nice clear day. Heights have always freaked me out a little. 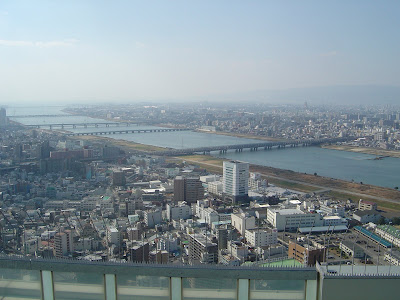 Osaka is a picturesque, low-lying metropolis with a lot of bridges. Unlike Busan, the mountains are far off in the distance. We stayed here for a good hour or two before moving on. In the cafeteria we ate ice-cream sandwiches. 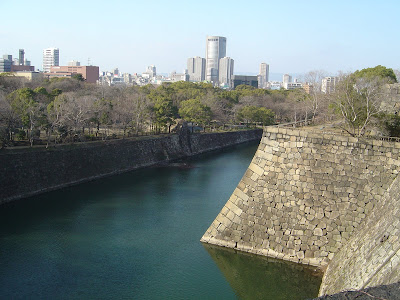 After that we went to Osaka Castle, a big historical site in the middle of the city. The area is surrounded by a moat and used to protect a small citadel. Now it's a popular tourist attraction and has good examples of Japanese architecture. 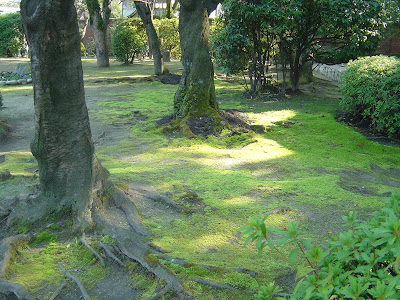 Inside the castle grounds is a lot of good landscaping and the trees are well kept. I noticed around the streets that the trees are all neatly pruned in general. 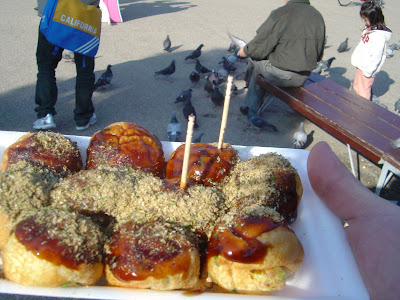 There were a few restaurants and souvenir shops in the castle grounds, so we bought some more takoyaki. They're very tasty and Heather had a dream about them when she came back. 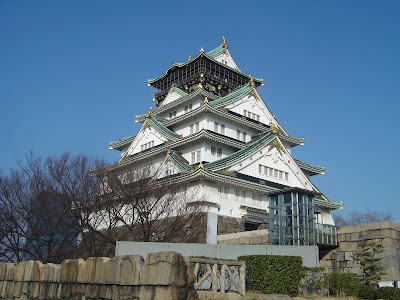 Here's the main building in Osaka castle. The palace was built in 1585 by Toyotomi Hideyoshi as a fortified residence, but has been knocked down several times in history. The most recent restoration was in 1997 and the results are quite stunning. 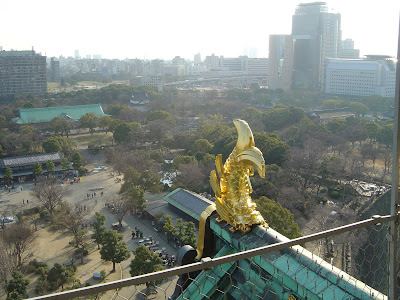 The building is now a multi-level museum with interactive displays about the area's history. This is the view from the top floor over the castle grounds. The golden fish tails on the roof are plated with 7 coats of gold leaf. They'd make a nice souvenir. There were more gold decorations on the hand rails, but they were shielded with acrylic. 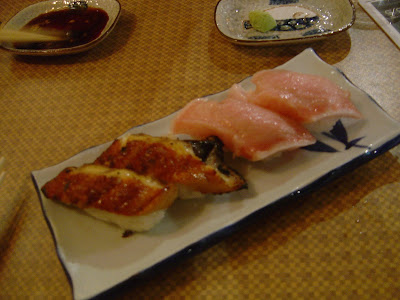 After that we couldn't resist stopping off for some more sashimi. Here you can see eel on the left and o-toro (tuna belly) on the right. It's the kind of food you daydream about the day after you've eaten it. 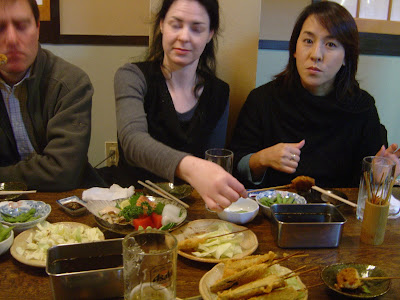 Then we went out to dinner with my sister again. On the right is Emiko, a sociable Japanese English teacher who likes to play and talk about tennis. Apparently, her tennis coach is very good and Emiko feels somewhat inferior to his lofty abilities. 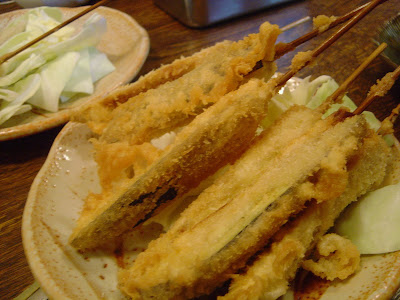 That night we ate at Izakaya, a popular type of Japanese drinking establishment. They served us a lot of fried foods with dipping sauce that were done very well. Normally a lot of deep fried food gets sickening pretty quickly, but the batter style was very light. In this picture you can see some deep fried eggplant kushiyaki on skewers. 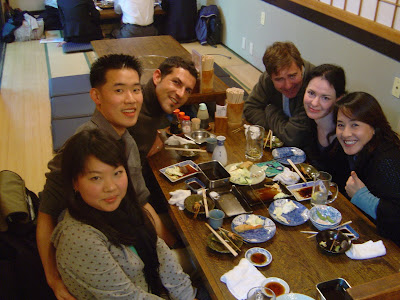 Here we are on the final night in Japan. I really liked the sake here, it tasted a little floral or something. The waitress took this photo of us. 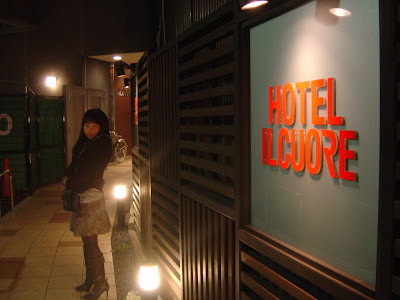 After going to a small bar and having some drinks, Heather and I went back to the hotel to pack up for Korea. The hotel was called Il Cuore and was in the middle of Namba, which was a great location. I'd recommend this place if you're planning on staying in Osaka for a few nights. 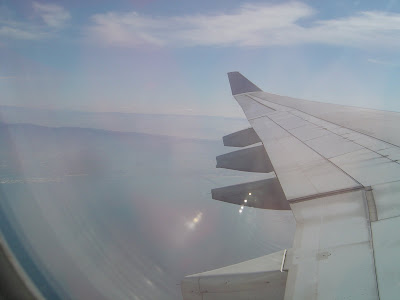 We missed our first flight back to Korea because we misjudged the subway timetable. Luckily the helpful airport workers booked us onto the next flight a couple of hours later, so we weren't late for work. What a tragedy that would have been.

As I was saying, both Korea and Japan have their fair share of good and bad points. Both times I've visited Japan, I've found it to be cleaner and more modern than Korea, but Korean people in general seem to be more straight forward. As the bartender in Zero put it, 'Japan is like a fantasy land, while Korea has clarity'. Both countries have fascinating cultures and much to be proud of.
Posted by Lee Farrand at 4:48 pm 1 comment: