In case you haven't noticed, Korea is a very food-orientated society. While I was eating out maybe twice a week or so in Australia, over here I eat out pretty much everyday. The food in simple diners like Kim-bap Cheon-guk (that literally translates to 'seaweed-rice heaven') is about the same price you'd pay if you were to buy the ingredients yourself and cook it at home. They'll deliver it to your house for free and then come back later and collect your dirty dishes. You can even ask them to pick up some beer from a convenience store along the way. 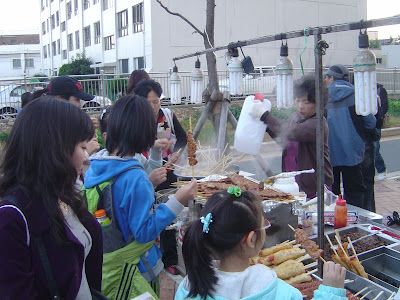 Street vendors are also a prominent part of the food system. Ajummas will set up stalls on the side of the road selling things like dried squid, sausages and skewered meat. At places like these when it's busy, you take and eat what you want. Then it's up to you to tell the ajumma what you ate and pay for it at the end. Middle school kids have a reputation for paying suspiciously small amounts of money. Takgatchi (teriyaki chicken on a stick) is my favourite thing to eat. 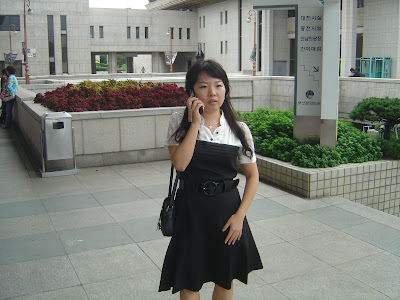 Meet Heather. She's previously been on the blog in subtle ways, but now we've been dating for a year so that deserves a proper introduction. Congratulations hunni.

I used to work with her in the old branch and we somehow gravitated towards each other. In this photo she's standing outside an auditorium in central Busan, where we went to see a cultural performance involving her private music instructor. 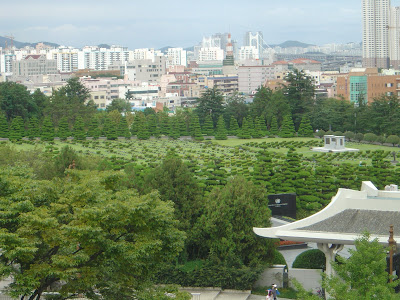 Across from the auditorium is the UN memorial park. Living in Korea now, it's sometimes easy to forget that around 50 years ago this country was at war with itself. The memorial park is well-kept and a nice escape from the surrounding suburbia. 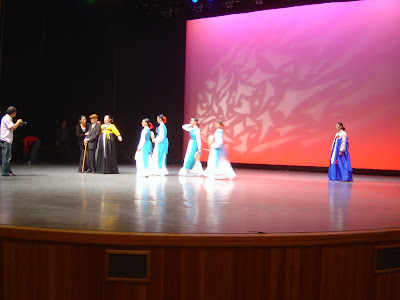 Then the performance started. It was a mixture of traditional Korean music and dance including pansori (acapella story-telling), samulnori (drums) and a lady dancing with a handkerchief. I liked the drums most. Because Heather is a student of one of the performers, we got our tickets for free. 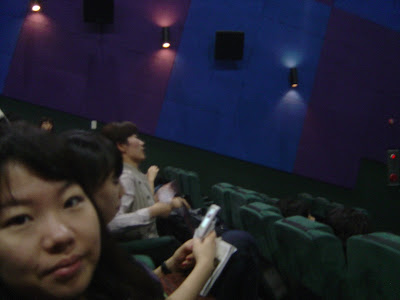 The Busan International Film Festival also came and went over the course of a week. Its primary focus is on giving publicity and support to new directors. We went to see two movies, a Dutch and a German one. The Dutch one was about divorce and the German one was about a disturbed wife who abuses her cop husband. Both of them were mildly depressing. I like independent films, but even more so when they are about happy topics. I don't want to point any fingers, but somebody in this photo chose both movies. Heehee. 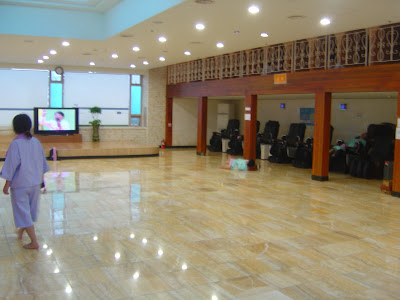 We found a new chimchilbang (bath house) in Jung-dong. It has all the usual things like saunas, hot tubs and massage chairs. One of the chairs is called the O2 Zone. You pull down a large visor when it starts and it releases peppermint oxygenated air while playing sounds of the rainforest. Upstairs are these little heated cubby-holes, where you can just crawl in and take a nap. 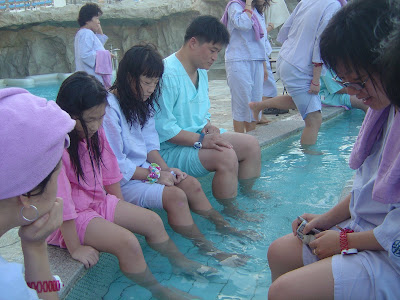 And then you go outside to these wading pools and get puzzled because everyone has their legs stuck in the water like this. 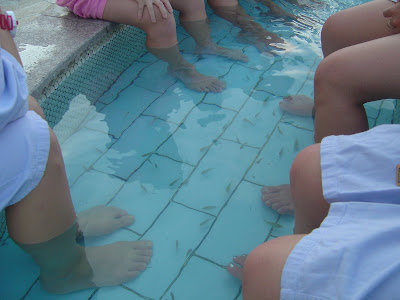 The wading pool has Doctor Fish in it. You put your feet in the water and these fish will come and eat the dead skin off your feet. They have rough lips and just scrape away gently. Sometimes they fight each other over who gets to nibble which part of the foot. Now that's something worth fighting for.

It's really ticklish the first time, but then becomes quite enjoyable. I would highly recommend it.

Here's a video of the Doctor Fish in action, when we went back the following week during the rain. They were a little more timid this time around. 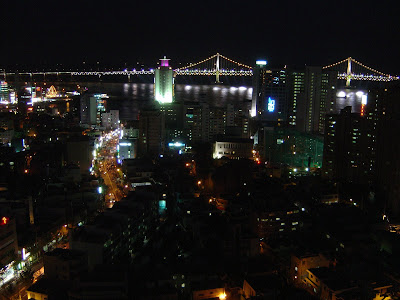 Every year at Gwangali beach they hold a 'Fire Flower' festival which consists of a laser show and a lot of fireworks. I heard that they set off 80,000 fireworks on the night, for a cost of one million dollars, and a million people crowd the beach area to watch them. In the background there is Gwangali bridge, which is one of the most prominent landmarks in Busan. 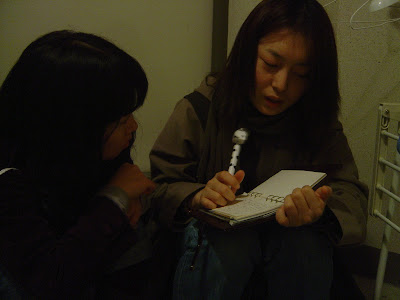 We were lucky enough to find a rooftop that we weren't supposed to be on. It was on the 20th floor of an apartment building but a sign at the entrance prohibited us from using it. But funnily enough the door wasn't locked. So we hid in this utility room until the time was right. That's Mi-Kyong on the right talking to Heather. Mi-Kyong is one of my classmates from Korean school who we've been hanging out with recently. She has lived in China for most of her life and now an avid reader of this blog. In this photo she's explaining a story she just wrote while we were waiting in the room, to Heather who is also fluent in Chinese. Funny stuff. 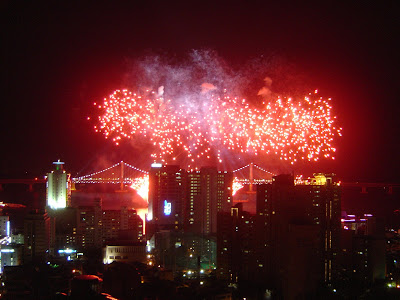 When the time was right we went out into the cold air and enjoyed the view. The fireworks were launched from the bridge and on a floating pontoon in the water. They could be seen from vantage points all over the city. 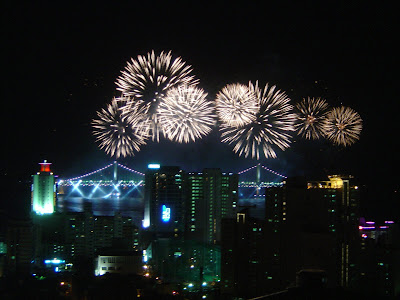 Powerful searchlights, lasers and music accompany the show, producing a variety of effects. My favourite parts were the 'smiley-face' fireworks and the biggest one they set-off, right in the middle of the show. The sky went dark and then a single flare climbed high into the sky and exploded. Its diameter was larger than the width of the two highest points of the bridge. Pretty impressive when you consider that the bridge is the longest in Korea and 7.5 kilometres long.

Photographs of fireworks never seem to do them justice. Here's a video I shot of the night. By the time they started, a few other people had found out about our viewing area 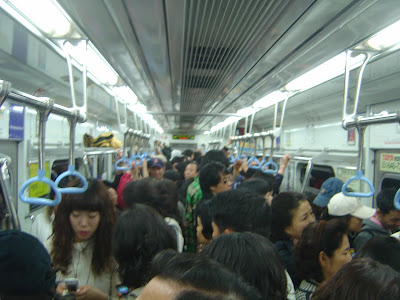 We took the subway home which was chaotic. Rivers of people were continuously streaming into the station, but luckily enough we were earlier than most. Even still, at the turnstiles everyone was so jammed in together that it was really difficult for me to put my hand in my jacket pocket to get my transit card. 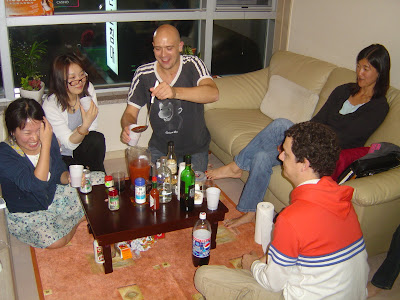 Because Mi-Kyong is relatively new to Korea, we had her birthday at our place. Jef made her a jug of rather complicated Bloody Mary that had V8 juice, tobasco, celery seed and garlic in it. Sitting in the couch there is also Julayne, who came down from Seoul to see the film festival. Julayne was the captain of the soccer team that I volunteered to be a linesman for back at the IKAA Gathering. Anybody coming down from Seoul is welcome to have a beer at my place, as long as you're relatively nice.