Life remains busy. I spend the week traveling across town, from Korean language classes to work. In the diminishing gaps of spare time unevenly dispersed throughout the week I wedge language exchanges, CCTV viewing, haircuts, university applications and private tutoring.
There's plenty of time to rest when you're dead. 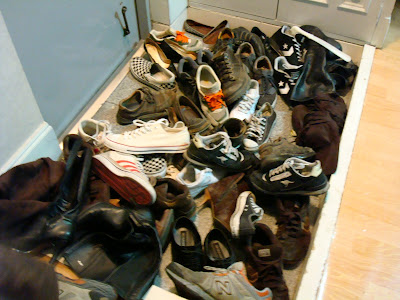 On the weekends however, spare time flows a little more generously and with it the ability to venture further than a 5 minute radius from the subway stations. A few weekends ago we went to an open house party in Dongnae held by Dylan. In this photo are the shoes of the guests. Foreigners in Korea can become so used to taking off their shoes that it ends up feeling strange to enter someone's house without doing it. 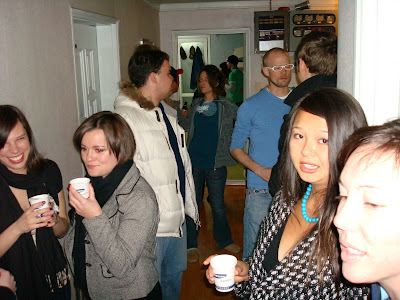 Because soju is so cheap and available on every street corner, parties like this can occur free of charge for the guests. The English teachers of Busan sporadically meet in such a fashion, before slowly filtering out in groups of 4-6 to the next agreed location. It was a good night out. 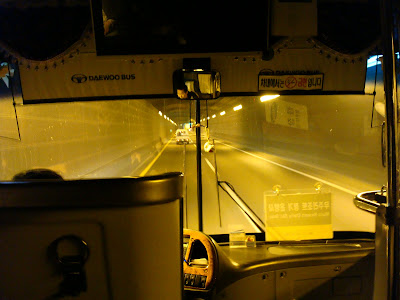 More recently we decided to make a trip up to the Muju Ski Resort. Muju is the biggest skiing destination in Korea and a package trip from Busan including chairlift, transport and rentals will only cost around $70 for the day. We had to wake up early to catch the 5:30am coach bus. 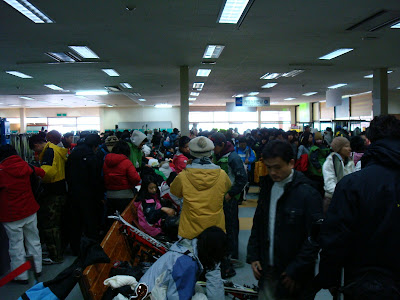 Upon arrival it became clear that the simple task of lining up for each individual piece of equipment would be somewhat challenging. A lot of leisure destinations in Korea are incredibly busy during peak season. So much so that I've acquired the tendency to purposely choose off-peak times when deciding to try something popular. Speaking broken Korean in such a noisy environment also increases the difficulty of obtaining any particular item. 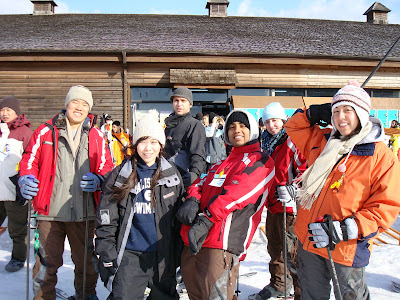 But soon enough we were all geared up and ready to hit the slopes. I had only been skiing twice in my life on indoor slopes in Australia about ten years ago, so the prospect of skiing down a mountain was a little daunting. 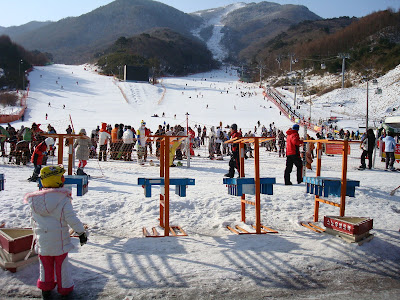 Muju was a lot bigger than I had imagined, with a variety of slopes and difficulty levels. Because winter was on its way out, a lot of slopes had patches of ice instead of snow on them. It was fairly crowded but not too bad. 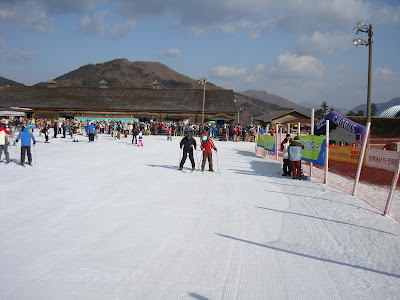 Michelle had never been skiing in her life and was given some quick lessons from her boyfriend Jordan, who was practically born on skis. Trekking out onto the snow with skis for the first time is a very cumbersome affair. 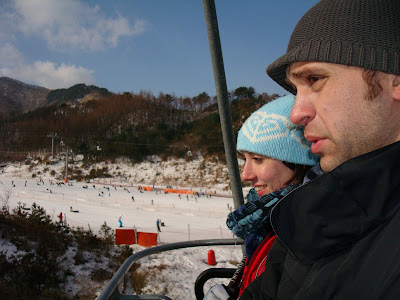 After a few short runs on a very flat surface we decided to head up to the top of the mountain. The view from the chairlifts was quite nice and nearly as enjoyable as the skiing. 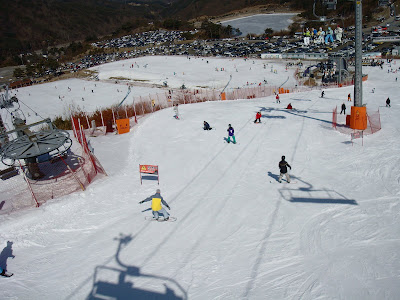 Skiiers and snowboarders criss-crossed down the mountain at various speeds. I witnessed a lot of collisions during the day and was later involved in one myself. I was going too fast near the bottom of the slope and hit an icy patch. A snowboarder drifted into my path and I went rolling down the hill for a good distance. Unlike the cartoons however, my tumble didn't initiate a progressively inflating snowball reaction. 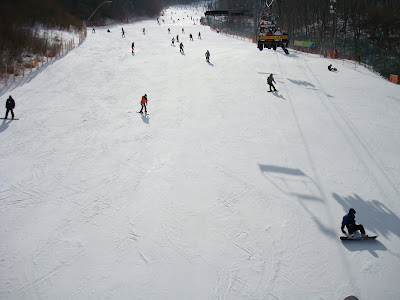 Some slopes were a lot easier than others. Most went for a few kilometres and there was a lot of powdery snow at the top. 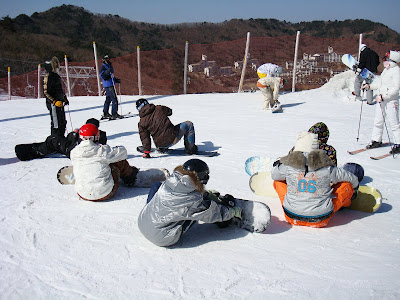 Having not quite gotten the knack of skiing just yet, I've decided to leave snowboarding to the experts. I find snowboarding a lot more difficult to comprehend due to the idea that it involves the immobilisation of both feet onto the same flexible sheet of perspex.


Here's a video of a mystery teacher, who may or may not be a colleague of ours, having difficulty remaining upright.

All in all, it was a good trip out. We left early in the morning and came back late in the afternoon on the same day. 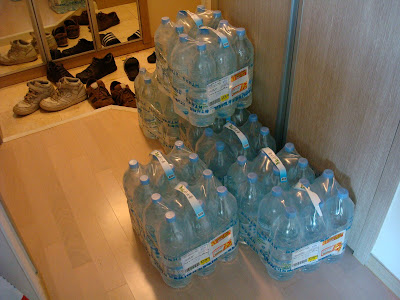 There are some people who drink tap water in Korea and there are some who don't. I've heard a lot of stories for and against, so when in doubt I think the best advice is to do what the locals do. And enough of the locals stay clear of tap water for me to be cautious. Unfortunately this usually means lugging 12 kilos of water back from the supermarket every trip which can be a hassle. Recently we found out that we could order bottled water online and have someone deliver it to our doorstep. So we ordered 120 litres in one go, along with a big bag of rice.

When the delivery guy eventually arrived, puffing and panting he said to me "Why did you order so much?" I replied "Because we like water." One day I'll be articulate enough in Korean to say something more witty. 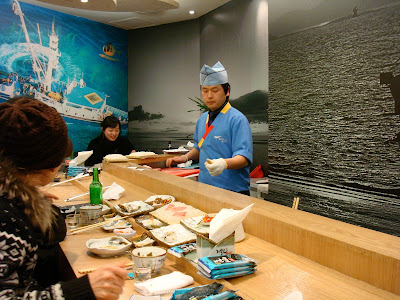 Near our house a new Korean restaurant that specialises in tuna just opened. It's called Gobukseon, which means 'turtle ship'. Turtle ships were armoured vessels used long ago against the Japanese in naval battles. Quite admirably I might add. Try reading up on Yi Sun-sin on the Wikipedia article sometime.

This tuna restaurant serves unlimited raw tuna that the chefs slice as you request it. They have a whole lot of different cuts as well as other side dishes. It's a very filling but fun way to eat out. 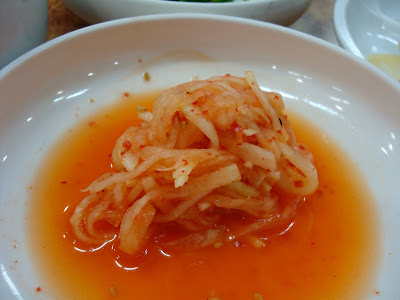 While we're on the topic of food, here's a close up of a radish kim-chi banchan, or side dish from a different restaurant nearby. Kim-chi comes in so many different varieties in Korea that you really become a connoisseur after a while. 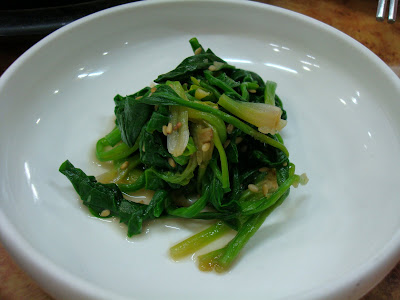 Here's another banchan, this one is made with a kind of spinach but lacking the signature red chili that features in the majority of them. Every different jjigae, or Korean stew comes with a different set of side dishes depending on the particular place you eat at. 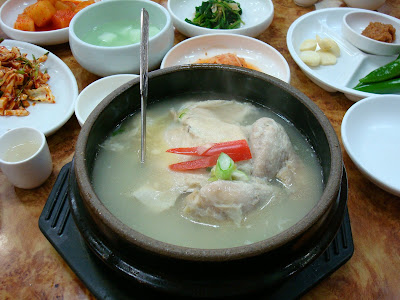 Those two side dishes came with my samgyetang, a ginseng and chicken herb soup. A whole baby chicken is cooked until very soft in a pot. It's stuffed with ginseng, chinese date, rice, ginger and other condiments resulting in a soothing and wholesome flavour. 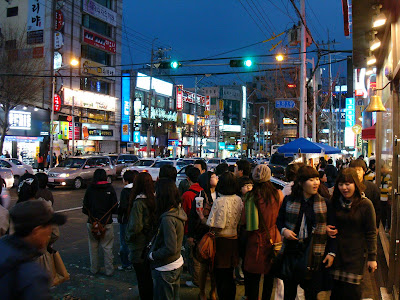 A common feature of Korean cities is that the neighbourhoods near prominent universities are nearly always bustling at night. This photo is from the main intersection near Kyungsung University. The crowds here are usually young and there are plenty of places to hang out and chat. 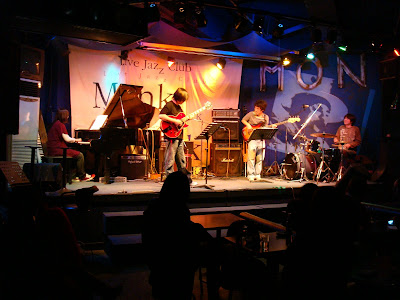 I've always been a dance-techno freak after being into the rave scene throughout university. But it was nice hanging out in this jazz club, Monk Bar, just around the corner from the Vinyl Underground. The group that played that night was pretty good. One of the guys was earlier playing on an electric bass, which reminded me of that pop group in Seoul who all played with electric violins. Sometimes I wish I could play a musical instrument. Then I remember that I can play the armpit. 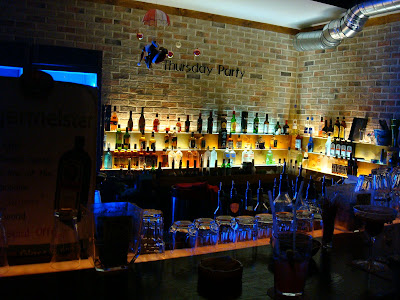 Also around the corner from Vinyl is another popular place called Thursday Party. These bars are frequented by foreigners in Busan and have a good selection of imported drinks on offer. Here they also serve curried popcorn and deep fried spaghetti sticks. 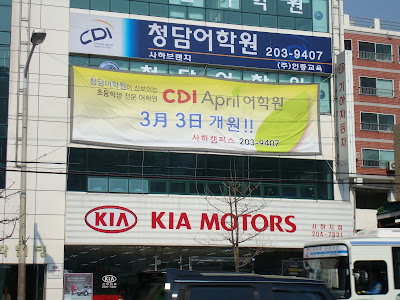 Work is still going well. Our branch just renovated for the new April English program. This is the banner hanging outside our window these days. I work in the classroom above the banner. 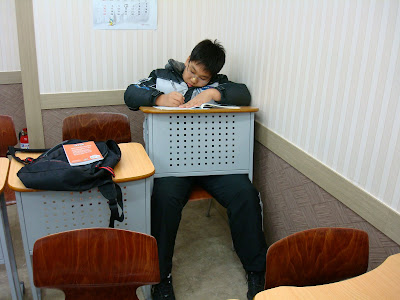 Here's one of our students called Joe. Joe used to live in the US and loves that Borat movie. He has a repertoire of quotes from the movie that he's only too happy to share with us all as we discuss noun clauses or contrast transitions. He also likes to hold the desk up on his lap like that. 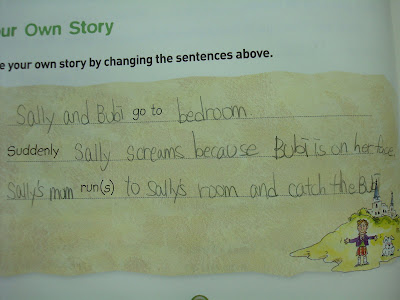 And this story was written by one of my elementary school students. I found it puzzling until she explained to me that Bubi was the name of her dog.

I also just created a new blog for our school branch, to act as a newsletter that students and teachers can contribute to. It's a little brief at the moment, but I'm sure it'll soon blossom nicely as this one has.The link is on the right. Check it out.