How to Feed Babies

Blogcrastination
noun.
The act or habit of, putting off or delaying blog posts.
Ex. He dearly loved to blog, yet his blogcrastination led to very sparse posting indeed. 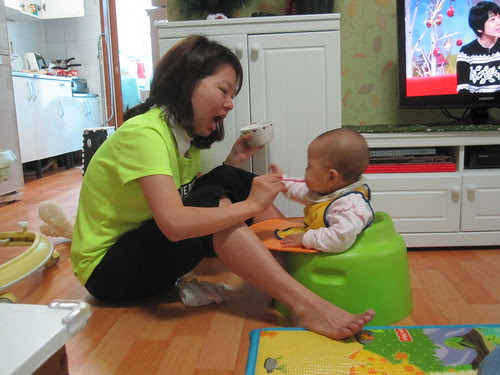 Of late, this blog and I have come to an agreed framework of sorts. A roadmap for peace. A six-point plan or a four noes and one without.

Whatever one may like to call it, it's a way for us to coexist in peace together. The problem with blogs is that once an author endeavours to cultivate an online following, it feels somewhat uneasy to neglect posting for long periods of time, leaving your possibly still-existent readership base with a void once filled with your mediocre ramblings on life in the conventional lane.
Thus a conflict ensues between the forces of time management and those derived from the imagined expectations of one's audience. 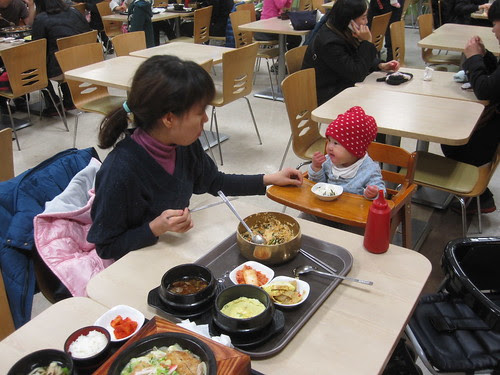 The agreed framework hinges upon the idea that as long as readers continue to jingle the sitemeter with daily visits, Lee's Korea Blog shall continue, but only as time permits. In other words, nothing changes. 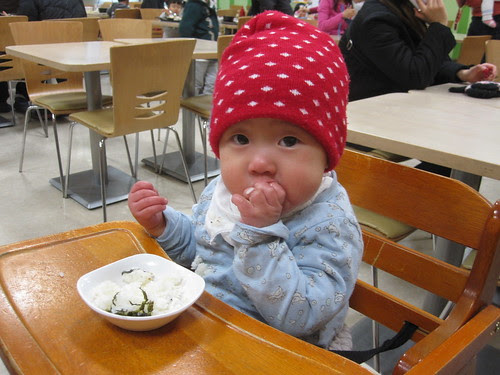 One of the other reasons that blogging has become sparse these days is because all of my photos are of Baengy. So if that's what you want to see, hey, you know where to come.

As someone somewhere famously once said,

"I have nothing to offer, except blood, toil, tears, sweat and Baengy photos." 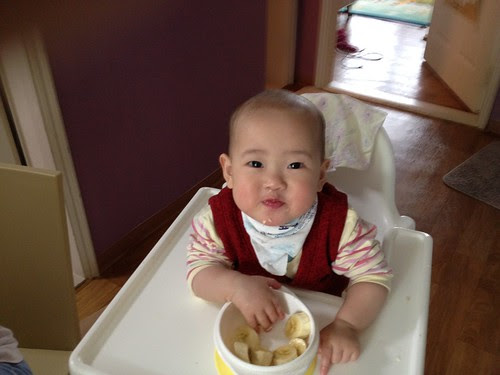 As you may recall from biology class, babies require sunlight, air, water and nutritional sustenance in order to survive. While administration of the former three can be fairly straightforward, the proper feeding of babies can require years of practice. 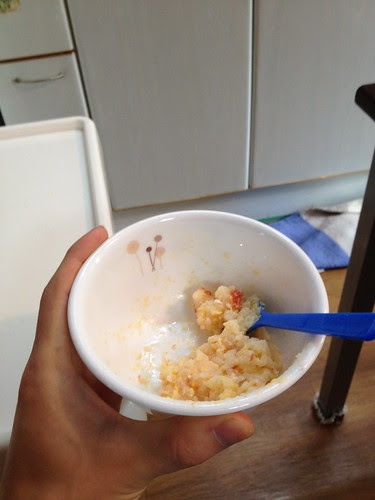 For the average human baby who is busy building a bitsy burgeoning body, teeth are non-critical luxuries with a high calcium cost. With the elongation and strengthening of bones also in full swing, such valuable mineral resources become thinly spread.
Baengy hasn't developed molars yet, so she can chop things with her incisors, but she can't chew. To help her out, we do a bit of parental preparatory pseudo-chewing, which consists of us manually mushing Baengy Rice in a bowl with a spoon.

Baengy Rice is very much like normal rice, but Mrs Farrand adds more water and some other goodies like miniscule bits of tofu and vegetables. The result is a commendable concoction of pasty pebbles. 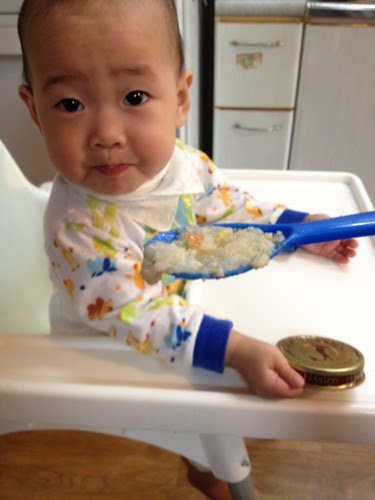 Now there are many ways to get food into a baby's mouth, but there are only a couple of ways to do it that are sustainable for a parent's mental health. You see, nearly every baby is fascinated with everything for Two Golden Minutes. The key to accomplishing tasks that are longer than two minutes in duration is to distract them long enough. Even if you manage to cram food into a baby's mouth after the two minutes have expired, if they're bored, they just dribble it out onto their clothes. That's why Baengy is holding a spaghetti jar lid in the photo above. I have become reliably confident in lids, most of which extend the Two Golden Minutes by an order of magnitude.

And because each baby will only allow a specified number of spoonfuls to enter their frontal crevasse in any one sitting, one needs to optimise the volume of food going in on each run. This necessitates paying attention to the architecture of the rice on the spoon, or as I like to call it, the rice-chitecture. You'll notice in the photo above that the amount of food is clearly suboptimal. One needs to really pack it on there more like a champion. 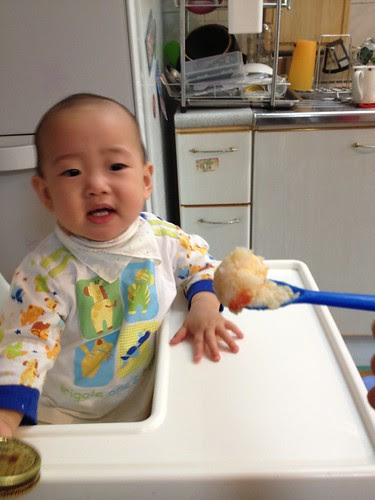 Here's one I prepared earlier.

Note the look of apprehension on Baengy's face, in full knowledge that an enormous dose of ricey goodness is coming her way. 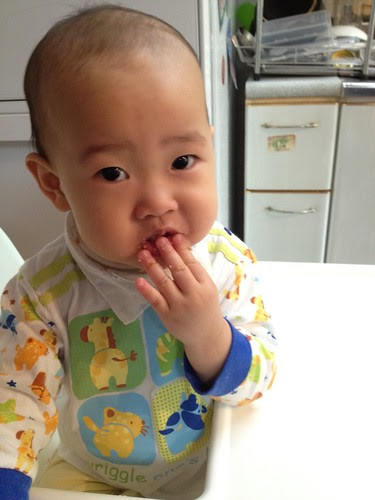 This is after the spoon has been retrieved for reloading. If you're wondering what happened in the middle, just imagine an abstract blur of mouth, teeth and spoon.

This was one of our daughter's first experiences with eating barely solid food. The food wasn't hot, so I guess her expression of disdain was more reflective of the repulsion of consuming anything but milk.

A slight improvement occurred over the next few days. As babies learn to eat, parents learn the intricate art of feeding. 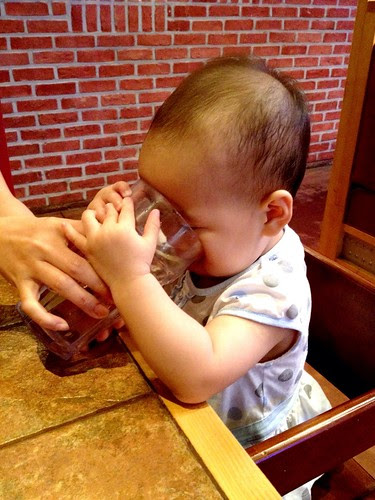 These days Baengy has learned all sorts of new tricks. She can spot her favourite foods by sight alone, imbibes fluid from an adult glass and has developed a screeching affinity for nuts and berries. 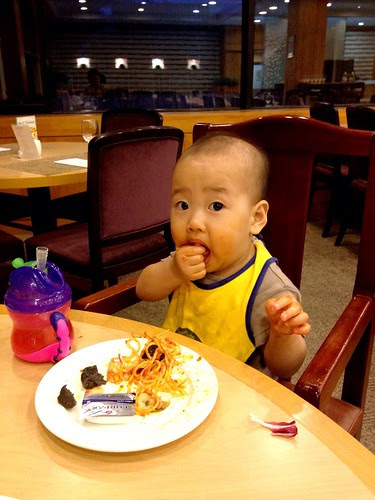 Her favourite food would probably be spaghetti and/or peaches. Both of which she manages to obliterate by squeezing through her hands and smearing onto surfaces within her general vicinity, like some kind of culinary graffiti. 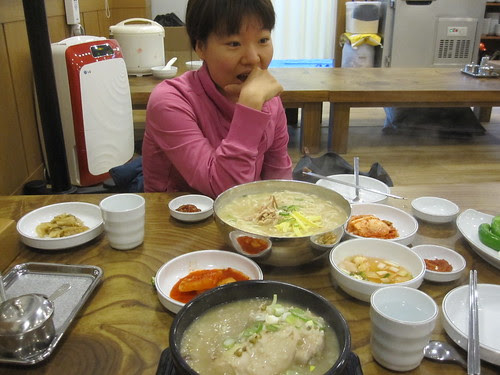 We like this chicken noodle place near our house in the Nakseongdae area. They sell a massive chicken kalguksoo for W6,000, which by general rules of geometry would typically not be consumable by a single person alone. 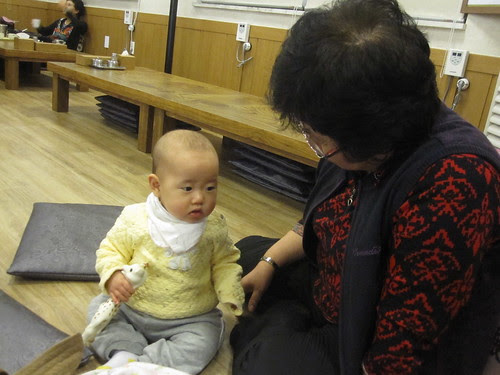 The owner of the place is this halmoni, who always comes and sits with Baengy for a while, and often times carries her off triumphantly to tour the kitchen. This particular photo was taken back when Baengy was in the Chubby Checker phase of infantile development. 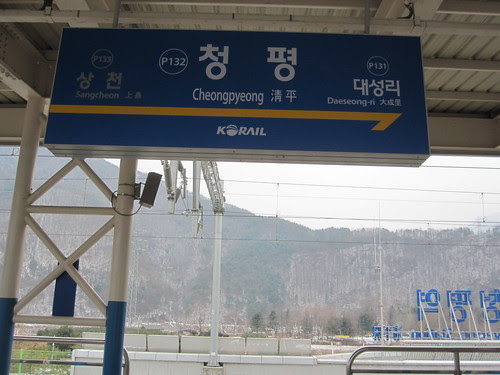 Last winter was six months ago, which certainly was a long time ago, but that is when we went to Cheongpyeong. Cheongpyeong is one hour east of Seoul, in Gapyeong county. 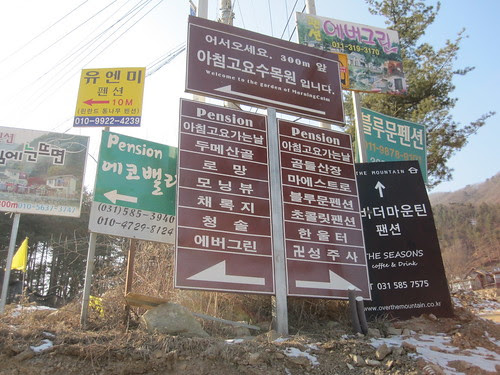 Every signpost in the photo above is pointing to a different pension. It's reminiscent of the crossroad intersection scene in that non-existent book, Alice in Pensionland.

In Korea, a pension is not what retirees get by on, it's like a holiday house for rent. 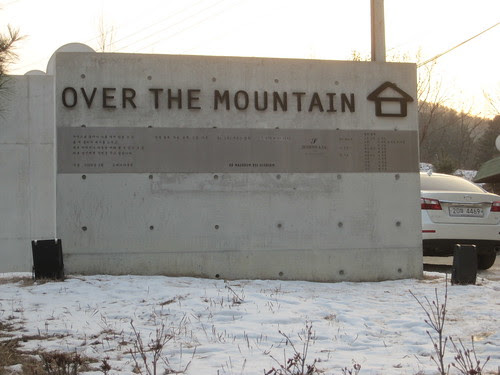 We stayed for two nights in a pension complex called Over The Mountain. It was a nice place, but a more accurate name would have been 'At the End of a Dirt Road, Near a Mountain'. 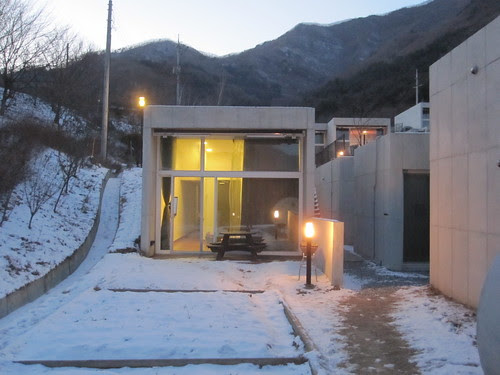 Away from the busy roads and sloped roofing of regular Korea, we huddled in our cement cell blocks, warmed by combustion heating. 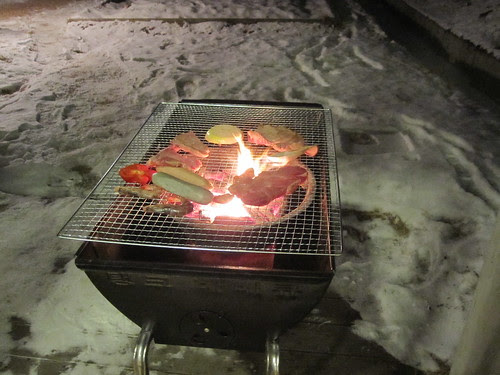 We ate a barbecue dinner pack, which was one of a few things orderable from the local store, the name of which was, fittingly, Store. 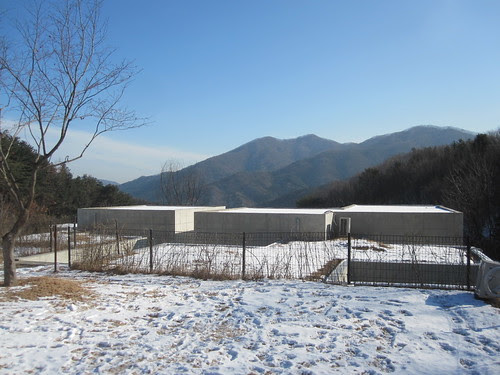 The mountain air was crisp and punctuated by short bursts of profound realisation.

In the mountains of Cheongpyeong, all is possible. 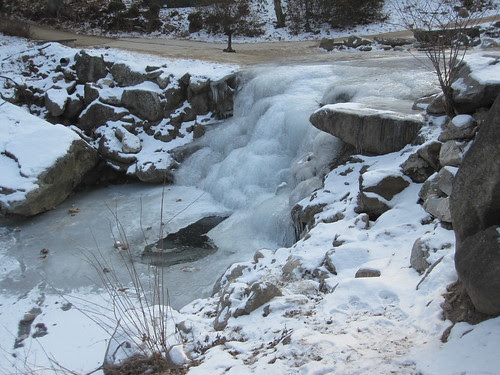 Here's a frozen waterfall in the frozen Botanic Gardens of Cheongpyeong. 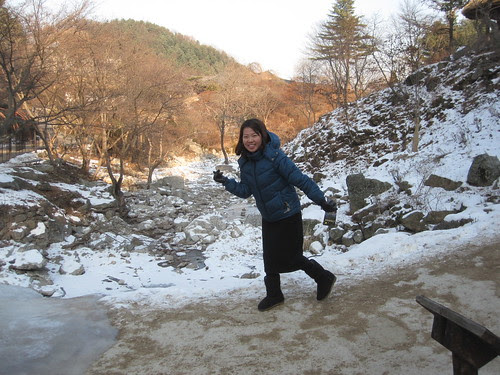 And here's Mrs Farrand near a frozen waterfall in the frozen Botanic Gardens of Cheongpyeong. 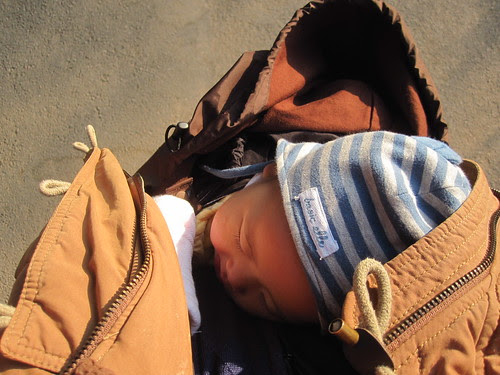 Baengy now holds the distinction of quite possibly being the only Korean-Australian baby to have ever slept through an entire hike through Cheongpyeong's Frozen Botanical Garden. 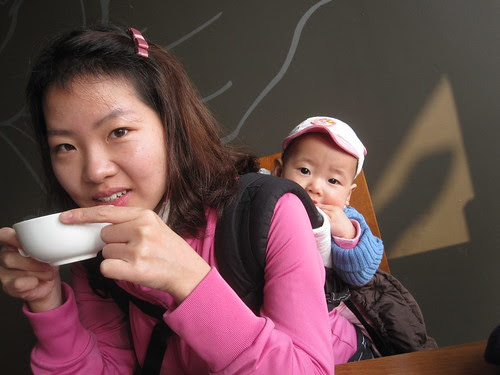 All in all, we rather enjoyed our trip to Gapyeong county. We also enjoyed the transition back to normal civilisation, facilitated by a cup of boiled water seasoned with powdered instant coffee. It was delicious. 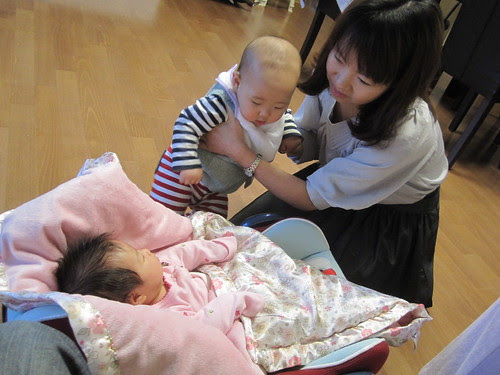 Here's Baengy and Heather checking out the newest kid on the block, Anthony's daughter Khalisi. She was born with a full head of hair, which is a source of envy in the world of babies. 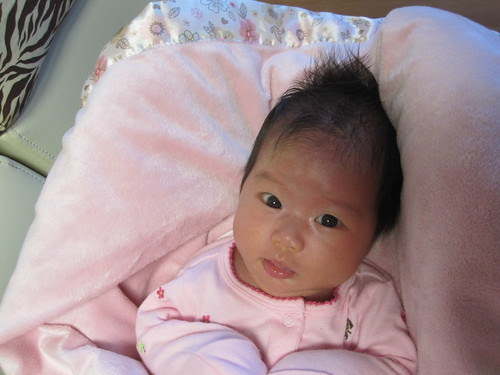 Khalisi is around 8 months old now and growing up fine. We expect that she and Baengy will get along like a house on fire.
Right before this photo was taken, Khalisi informed me that she is a fervent reader of Lee's Korea Blog and has been dismayed at the recent lack of posting.

Hopefully there won't be too much blogcrastination before the next one.