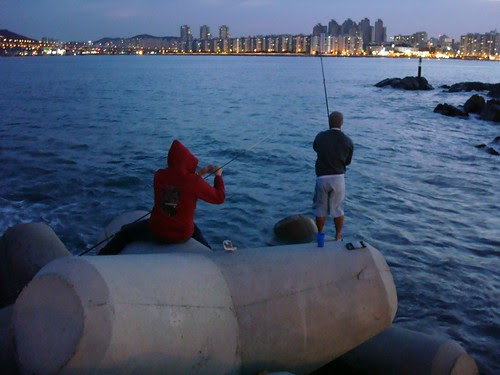 About this Blog
This little blog began in the humid Korean summer of July 2006, originally to serve as a diary of life in Korea. It has widened a bit in scope since then, and is trying to be more entertaining and informative, to varying degrees of success. 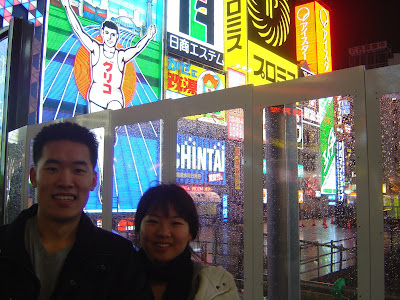 About the Author
Lee was born in Korea in May of 1982 and adopted to Australian parents two years later. While studying in university, Lee was a cook for 7 years at the Casuarina Malaysian Bistro in Adelaide and returned to Korea after graduating in biotechnology. He taught English in Busan for 2 years for the Chungdahm Institute, before moving to Seoul. He did fifteen months of a doctoral degree in agricultural biotech before transferring to a new program in ovarian cancer at Seoul National University. He is married to a lovely wife named 가희 (Heather), and they spend the weekends finding and extracting each other's white hairs. Lee and Heather have an amazing baby daughter whose real name is Ashley, but is often called Big Baengy. They also have an amazing son called Alex, who is infrequently called Mr Alex. Lee is a Wikipedia fanatic, spending more time on that website than any other. He believes that Wiki projects are an amazing architectural feat providing benefit to the masses by bringing current and reviewed knowledge to the fingertips and ponderment of the layman. He also finds it amusing to write about himself in the third person.

To contact Lee with any comments, questions or suggestions you can email him at: leeskoreablog at gmail dot com
Alternatively, you're invited to leave a comment in the section below, which is serving as the guestbook.

"Though I may not know what life is like in South Korea, reading Lee's blog
gives me a great glimpse of it. He's got some informative and funny stories
& wonderful daily adventures in store for us that definitely won't disappoint. :)"

Hi Claire, sure you can use anything you find on this website.

hi! fellow adelaideian here!!! I couldn't believe my eyes when I read Adelaide, Australia but I guess it's true :) Loving your blog by the way.

I'm indonesian. Realy interesting with korea. never go to korea (not yet but hope so). so, i just look around korea by online.

i excuse following your blog.

Hi Lee!
I'm absolutely loving your writing--my husband & I are considering teaching English in Korea, and your blog has been the most interesting, hilarious, & informative to boot so far. Thanks!

Lee, stumbled on your blog and have been cracking up reading your hilarious banter about life. Following you and excited to read more... Living in Seoul with my fiancée and jealous of your new big place:) You have a funny talent good sir! Keep up the good work!!

Lee! It's Julie Silva. I was just Googling Busan Blog and came across yours. What are the odds. I'm planning on coming back to teach more in Busan in a few weeks, and am just happy at the idea of kimchi and Busan. Loving the blog! I plan to take quite a few photographs. I'm curious to hear how the married life in Seoul is treating you! :)

Hi! Just because I couldn't figure out a word that a Korean student wrote down on his article that I was proofreading, that I got to come across this blog. Fortunately, one of your entries enlightened me. :) Anyway, I've been an ESL teacher for a couple of years now, mostly for Koreans. And, I as I read some of your entries, I suddenly found myself laughing because I remember those moments that used to experience with my Korean students. Very well written entries.

I love your blog and hope to move to Korea this summer to work as a english teacher. I gonna jump of a limp and ask you this question. I was wondering if you could suggest resources for me to get volunteer experience in a lab/hospital/women's center when I come to Korea? My Korean is nonexistent but I plan on studying it when I am there. So I know the language barrier will plav a role in volunteering. Any advice would be helpful:)

Thanks for the comments everyone.

Travelingnatural, it'd be hard to volunteer at a hospital, but try asking at www.eslcafe.com

Came across your blog by chance. We (family) were in Korea in June for one week. Was a great experience. Weather was nice but not sure whether we will like the winter. Had so much Korean food till we missed Malaysian food. We are from Malaysia and since you have worked in a Malaysian bistro and had a brief stopover in KL, I guess you understand how much we can missed Malaysian food after some time

Will definitely go to Korea again.

Hello, Im an Aussie too! I was just checking out your blog, maybe you would be interested in mine as well: http://aussieinkorea.blogspot.com/

Hey, I really like your blog, good job.
Greetings

Hey I just thought I'd let you know that I'm linking to you from my Lost in Korea blog. If you'd like to link back I'd appreciate it! Oh yeah, I'm adopted too.

So nice to find a blog about life in Korea. I'm an adoptee myself, and I've been to Seoul several times, though moving to Korea permanently would probably be too big a step for me.

Sanne - Mitzie Mee said...
This comment has been removed by a blog administrator.
4:41 pm

Wasn't sure how to contact you but I wanted to ask if I could find a place on your Korean blogs roll: )

I write about life and foodspotting in South Korea, and I make youtube videos about it too.

hi...come across your blog, when i search about Korea.
me myself is an Indonesian who dream to live in Korea once i graduate from my postgraduate degree :)
already learn the language and try to learn the cultural.

nice to read your blog

Just discovered your blog via twitter love hearing your musings on life from Korea/ Australia and back to Korea again it's quite a journey.

Hi Lee! I am going to Seoul next week and actually I am doing my itinerary for a week-ful of fun and appreciation of Korean culture. So if you could share some tips (where to and what to) for a first-timer in Seoul like me that would be a great help. ;)