A lab meeting tomorrow. An experiment to reschedule. Some emails to send. I should really start learning Korean again. And start running too. What's the weather going to be tomorrow? Probably too hot for running. I haven't blogged for a while. Maybe I should fire off a post before sunrise.

Who said insomnia couldn't be productive? 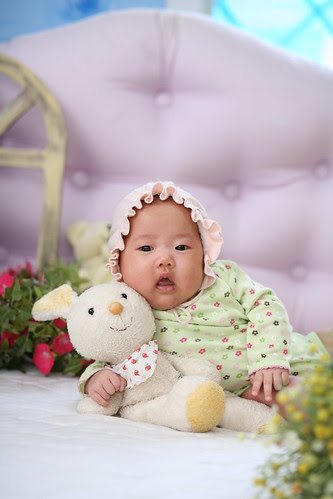 Well, I don't know if it's insomnia per se if it's primarily due to a tiny member of the human race with a disproportionately loud voice, wailing to the lyrics of a song that goes "waaaa, wa-wa.... waaaaaaaa" 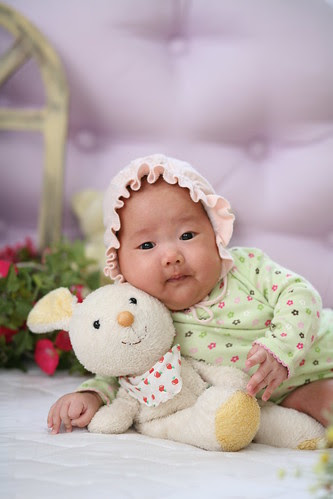 But look at her! How can anyone be upset at such an adorable 3am wake-up call? Certainly not this stalwart young... slightly tired....  zzzz ...bloggerrr zzz 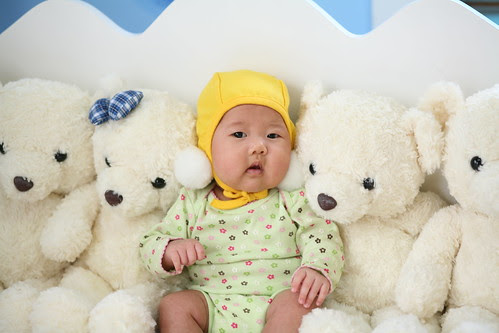 This photoshoot occurred when she had just turned 50 days old. She looks pretty much the same these days, but right after she was born, her face changed a lot each day.

I think it had something to do with being suspended in amniotic fluid for nine months. 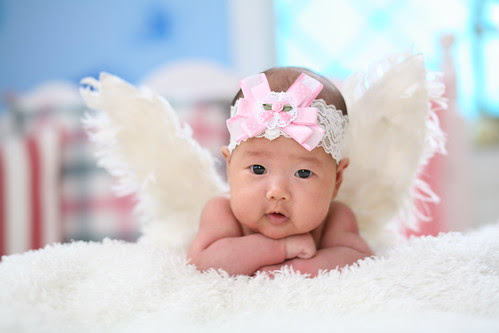 This photo is on our desktop and gets a lot of chuckle-mileage. I used to be rather ambivalent towards the old Anne Geddes calendars in my youth.
But recently I've detected a stirring in the neurons of my brain responsible for the appreciation of baby-studio photography. 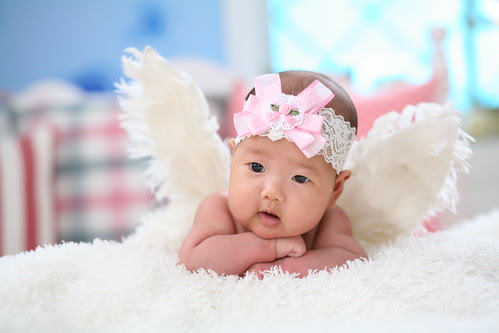 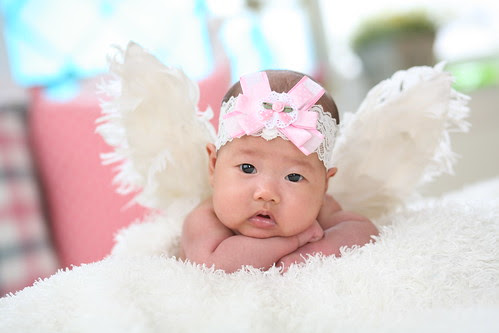 The studio photographers must know a thing or two, because I've long since tried to get Ashley to put her arms that way and keep them there. Even after carefully explaining to her that I'd like to replicate the cuteness seen in the studio photographs, she only holds the pose for a nanosecond before her spring-loaded arms pop out, upwards and into the air, like some kind of victorious jelly.

I suspect some kind of 3M adhesive patches were used. 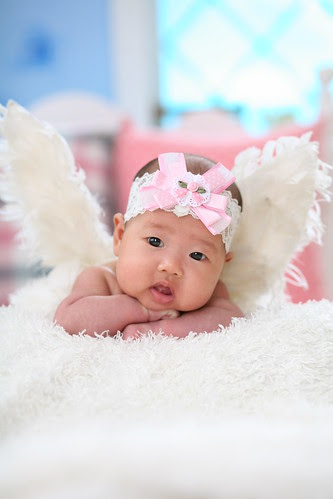 Our little one really is an angel. Although definitely not the angel of sleep. 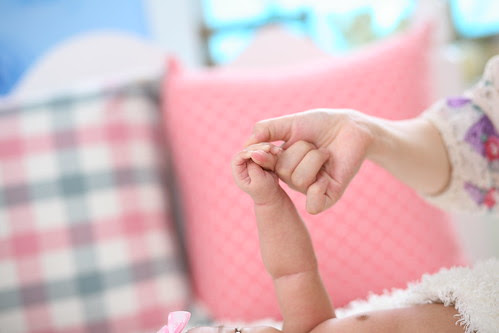 Ashley has progressed in leaps and bounds. While before she was incapable of lifting her head or controlling her legs appreciably, she can now turn her head autonomously and kick in a sensible manner. Sometimes she'll kick us when we change her nappy.
Well, it's not really a kick, but a cuter version of a kick. 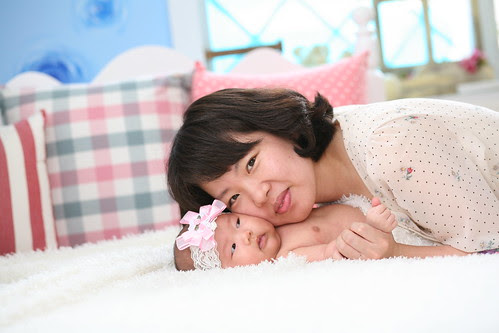 Baby skin is quite possibly the softest known material in the universe. I'd gladly use Ashley as a pillow, if not for the weight of my head. Come to think of it, babies are pretty well-designed in general. They smell quite nice and can usually be found in the same place you left them last. 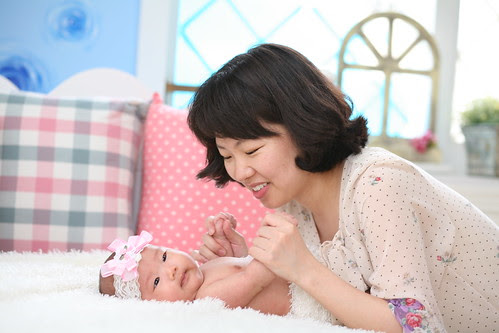 Heather is a star-mother. She sleeps with Ashley in the spare bedroom and sings her back to sleep during her nightly outbursts of baby-song that penetrate every crevice of our humble abode. Ashley soon falls back to sleep, dreaming of whatever it is that babies dream of. I like to entertain the idea that they're about milk, mother, blurry images and muffled voices.

In the mornings when I go in to greet her, she gives me a toothless pseudo-smile, like some old ajosshi. -"Keep you up at night? Who... me?" - And sometimes she gurgles softly as if she's trying to tell me something. I always gurgle back.

So even though good sleep is a good thing, a multitude of other good things are making up for the loss.

Last week I finally located my old middle school friend, Kenneth Wong on Facebook. Both he and I spent many an afternoon class at the Morialta campus producing various flickbook animations in our maths textbooks, in the vain hope that we would someday become famous animators. Only one of us succeeded. Ken is now an accomplished artist living in Shanghai. In the eyes of an uncultured scientist, an artist becomes accomplished when they no longer need to worry about employment.

You can see some of his handiwork here. 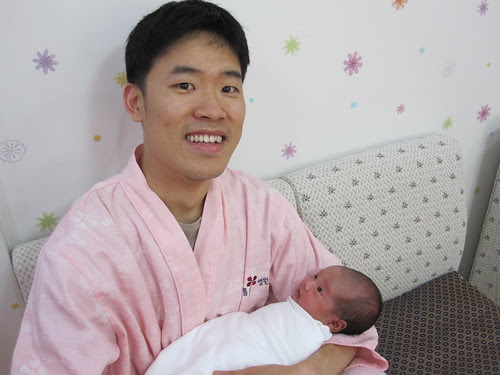 Ken and I spent some time catching up online, although how he circumvents the Great Firewall of China is beyond my understanding. When we were young and extremely geeky, some of our favourite topics of conversation were console gaming, science fiction and inanely hypothetical situations. I often claimed (on paper) that my quarks were bigger than his.
It's funny how some things change and some things don't, while time moves on regardless. In some of my more recent studies of the human experience, I've observed that time is indeed influenced by the gravity of any situation. 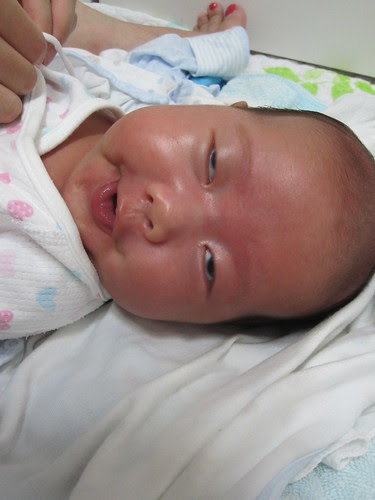 The birth of our daughter has proven sufficiently situationally dense that it has distorted perception of time. In some ways it feels that things have slowed down to single frames of motion. They say that time compensates for this temporal anomaly by later accelerating and allowing children to grow up so fast.
Hoping not to let these events slip past the archives of memory, this young blogger will try to be more diligent in affixing them firmly to the walls of his little blog. 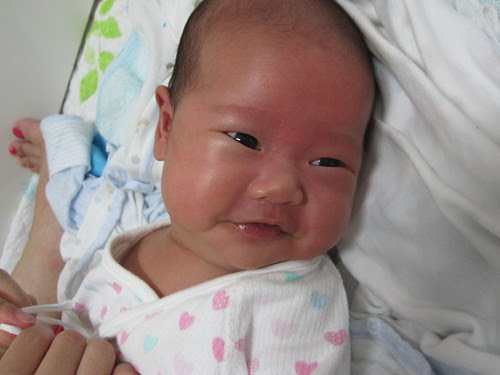 Sometimes we call her Ashley and sometimes 은서 (Eunseo), but overwhelmingly it's still variations of her fetal name of Big Baengy. It just seems more appropriate. Even Korean Grandmother prefers it.

These days, Baengy spends much of her waking hours trying out new facial expressions, oblivious to the situational context. For example, twenty minutes after absolutely nothing has happened, her face will suddenly light up in sheer astonishment.

Those in the neuroscience community should really try to identify the neurons responsible. 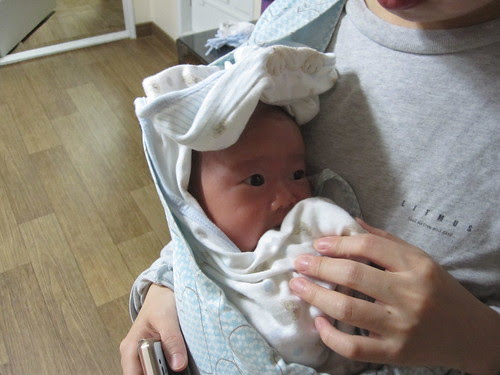 Babies, in general, are heavy. Now I know why the arms of Heather's mother are so stocky - she had five kids. In order to alleviate the eternal conflict between a baby continuously wanting to be held and a parent having sore arms, the mothers of generations past have invented the hot sling.

Baengy doesn't mind being hot slung too much, and generally powers down into passive mode when confined in such a way. It's kind of like how a kitten freezes when you hold it by the scruff of the neck. 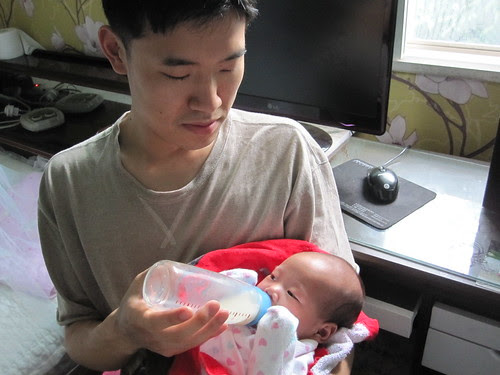 Mothers have a special ear for distinguishing between the different cries of babies and can remedy an outburst with lightning efficiency. My insensitive man-brain on the other hand has a difficult time even trying to distinguish which baby is mine.

Nonetheless, when Baengy cries and mother is busy, I tend to assume it's reason number one. Often times, I am correct. 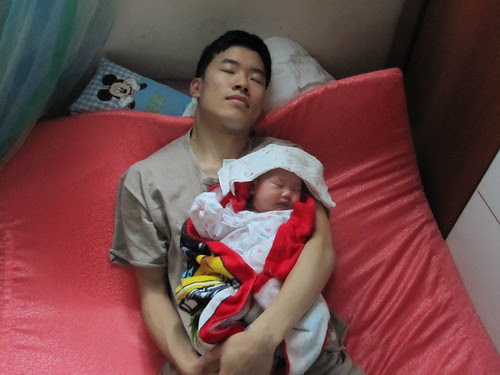 After milk time, it's always sleepy time. Heather tells me that good parenting is all about routine. 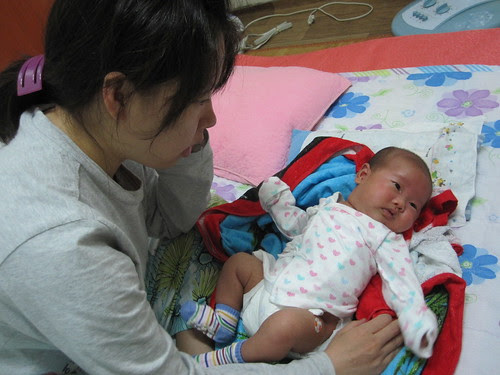 Heather, like many of her Venusian compatriots, is an excellent multitasker. Why nature did not afford the female race an extra set of arms is beyond me.

See that little sticker on Baengy's left thigh? That's from her vaccination shot. One consistent truth we've identified is that Baengy is vehemontly opposed to all things vaccine-related.

I propose that it's because she has yet to understand the science behind it. 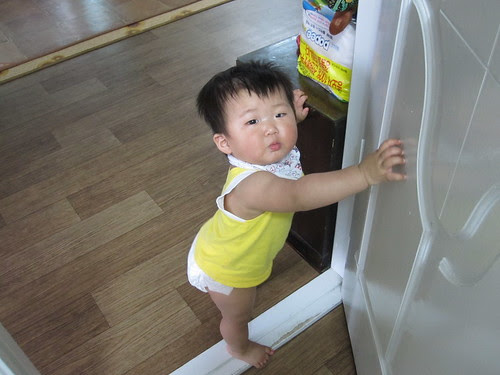 Yujin is Ashley's boisterous one year old cousin, who has evidently figured out how to open doors. 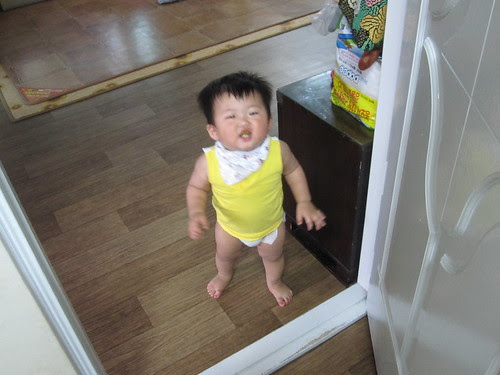 This is comical for the first dozen times, but thereafter its comedic edge declines. Yujin cannot yet talk, but engages in baby proto-talk, which is basically composed of a whole lot of babbling. Sometimes she'll finish a babble sentence by pausing with an expectant facial expression, as if waiting for a reply.

I always attempt a reply in her own language. 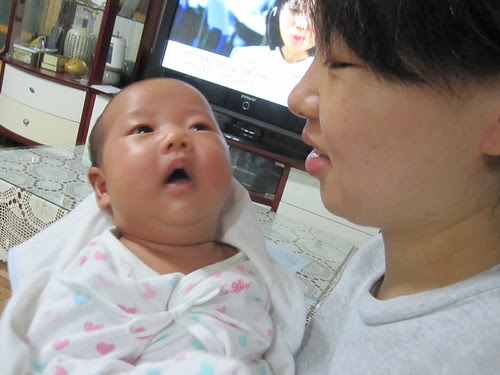 When I think of myself as a baby, I assume that being held all the time would be annoying. That just goes to show how inept I am at thinking of myself as a baby.
One thing I find fascinating is Baengy's patience while being repositioned. If you want to switch arms while holding her, or place her in a hot sling, all manner of extended clumsiness of a father-in-training can occur during the transition. She usually just waits it out and will occasionally flash you a sidelong glance, as if to say "Whatever it is that you're trying to do, you're probably getting better at it." 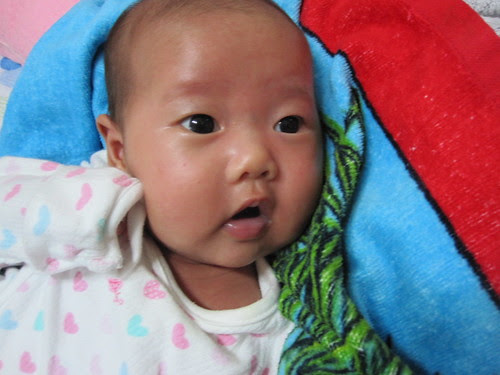 Evolutionarily speaking, having big eyes is good for seeing in the dark and spotting predators. Why a baby would need to do either of those things is still confusing to me. 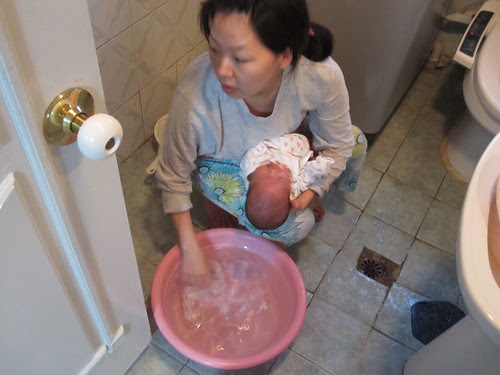 Baengy has a love-hate relationship with baths. 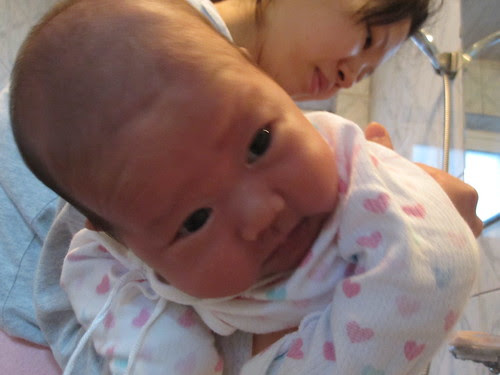 Sometimes she'll do what we call a Monumental Poop. These considerable excretions often surpass the operational capacities of a wet towel/nappy change combo, and necessitate a bottom-washing session in the bathroom sink. 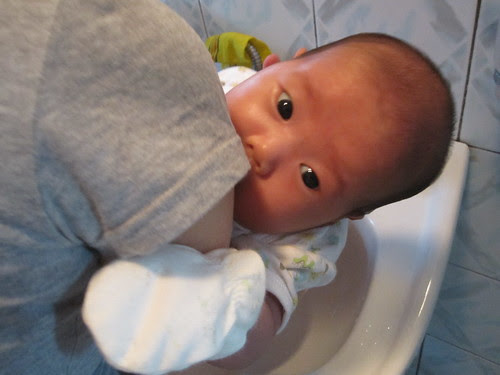 Baby poop is actually not so bad, by poop standards. If there were a scale for excremental disgustingness from one to ten, baby poop would be a one.

I guess ten would be the festering deposit of a carnivorous abomination with indigestion. 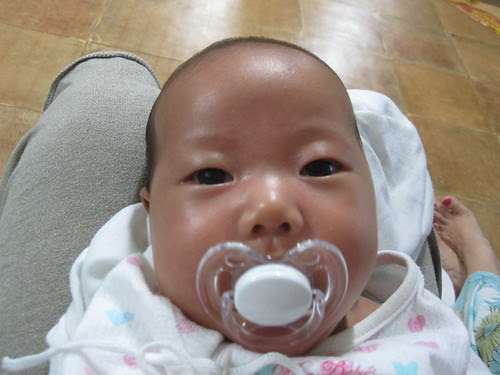 There are three amazing inventions in the baby world, each of which are worthy of a Nobel Prize. They are:

We'll address the latter two in a forthcoming blog post. We first introduced a pacifier to Baengy a few weeks ago, although we've heard that babies can get addicted to them. She and her pacifier are inseparable by a negative air pressure of about 60 psi. 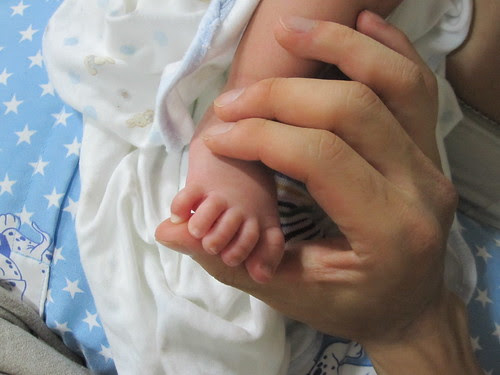 I cut her toenails for the first time in her life on the 31st of July, 2011. Perhaps she'll like to know such things, when she's older. 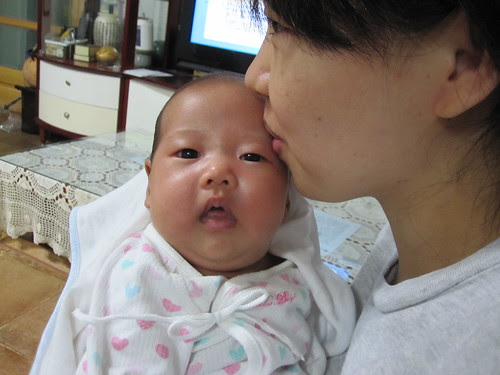 Raising a baby is no easy task, but is made considerably easier with family members around and the wonders of modern absorbant technology. Heather and Ashley have since moved to Seoul with me, after spending a month in Busan with Korean grandmother. Things are going well.

With a baby around the place, long term plans become considerably curtailed. On the horizon for us is a rocking chair, and perhaps a larger size of nappy.

Have a good weekend everyone.