"We're all passengers on the ship of life... and my ship is heading to the realm of old people."

- in a recent letter to a friend 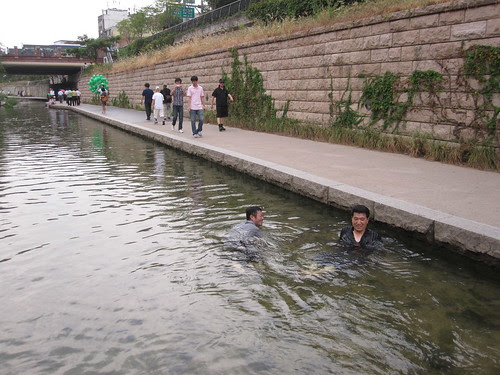 Around 10 years B.B (before Baengy), one of my closest friends was a chap named Ken Wong at the Norwood-Morialta Middle School. He and I would discuss the important things in life, like the theoretical speed limit for a Mechwarrior or the presence of AT-STs in the Battle of Hoth. Our destinies diverged, and I became more interested in social rebellion while he became fixated on graphic art. For years we lived parallel lives with little knowledge of each other, until I tracked him down on the other side of the Yellow Sea. Before long, in a much vaster homage to our reciprocal house visits between Dernancourt and Magill, he flew to Seoul from Shanghai by means of aluminium plane. 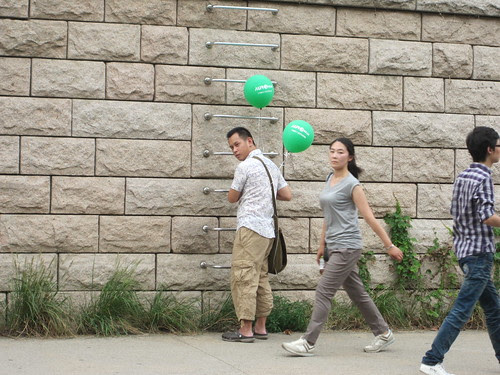 They say that fundamentally, our personalities are irreversibly defined during the first 12 years of life. After that, only minor changes will occur. Say for example, my personality was defined as mint at the age of 12. By the age of 29, my flavour would still be mint, but perhaps mint-choco-chip, or spearmint. It is not possible to change from mint at 12 years old to lemon sorbet at 29.

In the bemusing-yet-understandable situation above, after arriving in Seoul, Ken found himself tying helium balloons to some rungs on the side of a wall. Somehow this told me that he was pretty much the same guy I knew, all those years ago. 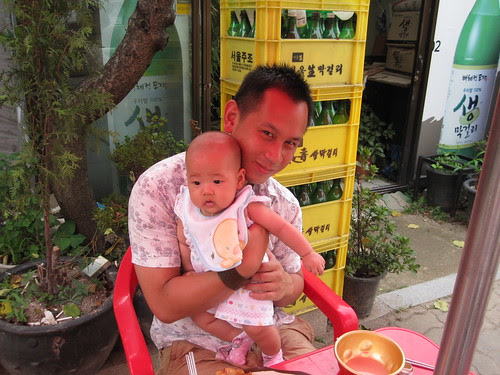 Ken and Baengy got along like a cat and a treadmill. Baengy, in general, doesn't mind being picked up and taken for mini-tours of the immediate surrounds, provided mum is within eyeshot.

Over-enthusiastic baby handlers who hold Baengy for longer than 5 minutes, outside of mum-viewing distance, soon find themselves a recipient of baby squeals, frantic struggling and kicketty-kicks. 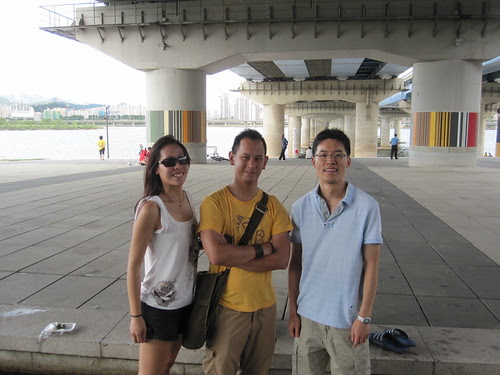 Ken's sister Emily also came along for her first visit to the land of writhing seafood. And with all visitors who come to Seoul, I felt the need to show them some pylons.

As we used to say in the middle school days:
"Some day in the distant future, we shall view pylons together." 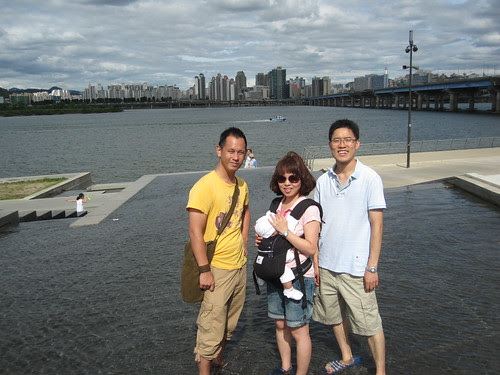 Ken is a formidable art nerd, and I'm a less formidable science nerd. We both appreciate the biology of octopuses, movies by the Coen brothers and the fact that someone beat Sim City. 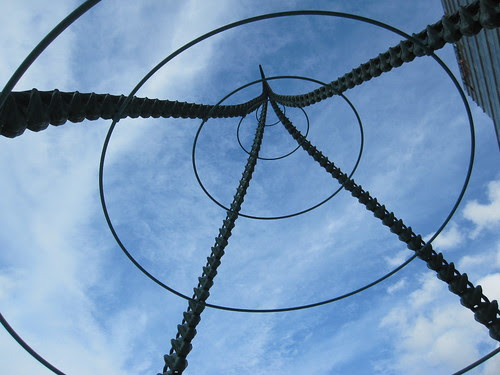 If temples have been seen, folk villages undesirable and Seoul N Tower unremarkable, what else can one do in Seoul? We ended up going to Insadong, Gangnam, the Han River and Times Square.

Out the front of Times Square Seoul is a wrought iron monument, the meaning of which eludes me. 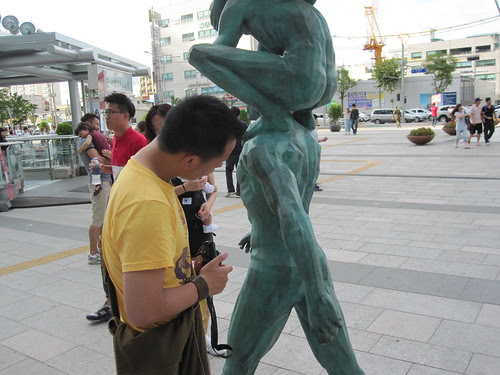 Being the inescapable artist that he is, Ken is drawn to surrounding examples of art like a bug toward a windshield. 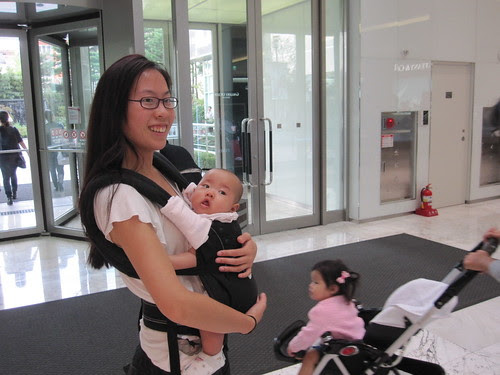 An arcane motherly instinct present in the vast majority of human females creates a broad smile whenever a baby is slung to them. Baengy is a whopping 7.8 kilos these days, and we're only too happy to have someone else carry her around a shopping mall. 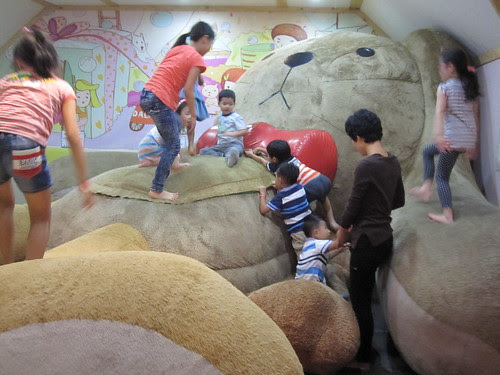 Down the rabbit hole we went, stumbling upon this imprisoned giant teddy bear, whose job delighting kids appeared nothing to envy. Whenever I picture myself being climbed upon like this by my kid(s) of the future, I imagine a feeling of overwhelming tiredness laced with necessary patience. 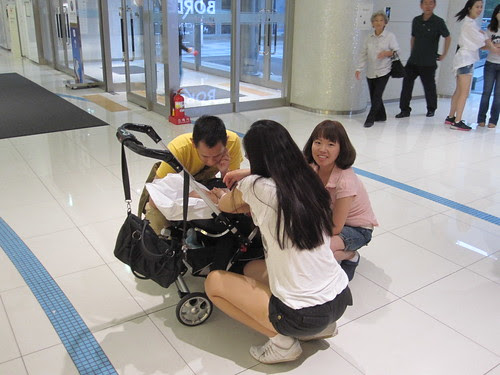 Baengy is an attention magnet, whose tentacles of distraction reach out and subdue innocent bystanders.

Fortunately she isn't carnivorous (only a devout lactivore). 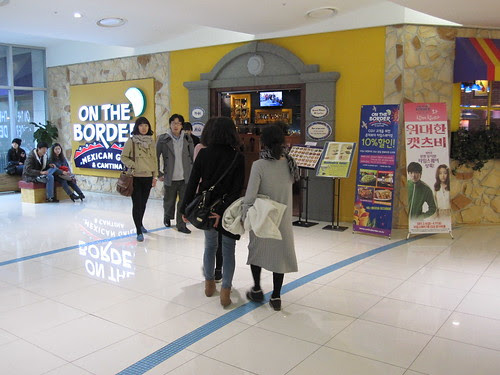 There's even less Mexican food in Australia than there is Korean food. During celebratory occasions these days, I often feel like eating something other than pickled vegetables, gochujang and self-cooked meat. 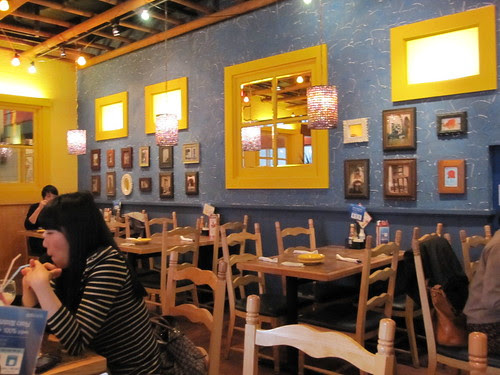 On The Border is a Mexican restaurant doing the rounds at the moment. Our verdict is that they're conclusively superior to Dos Tacos in every aspect except pricing. 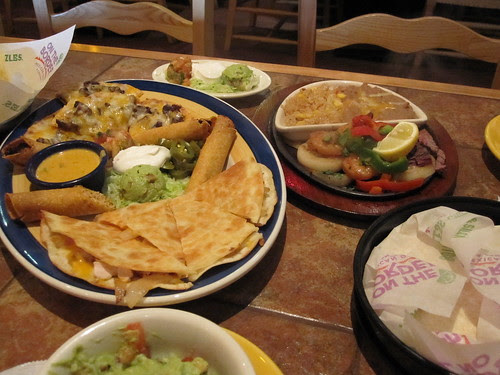 "The number of particles in a guaca-mole is equal to Avocado's Constant." 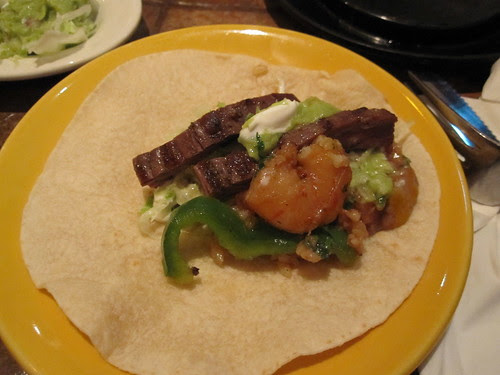 On The Border wrapped up our long overdue reunion with Ken quite nicely. To where he is going next, I know not, but hope to see him again in the not-too-distant future. 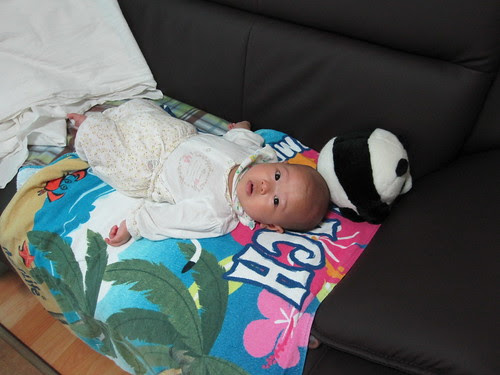 That little Panda was Ken's gift to Baengy. These days if you enter a room unannounced, stand outside her field of view and call her name, she'll start looking around for you. She hasn't yet mastered the usage of peripheral vision, but is rapidly getting better.
Previously she used to look around the room and if she saw my legs or body, she'd scan right past in the continuing search for the Origin of The Voice. But nowadays when she sees my legs, her eyes will slowly follow the trail of human body upwards to find the location of the Face from Whence the Voice Cometh. The process takes around 10 seconds.

And to reward her for such success, I always have an expression of feigned amazement, which invariably invokes a giggle or two. 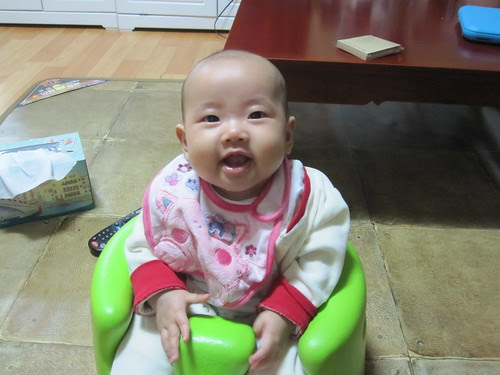 Heather calls Baengy 'chim-jaengy' which means something like "drool person". Throughout most of the day, she's slobbering over items of inspection like a hairless St Bernard.

When I think about it, it's kinda funny how she has only ever consumed milk since birth. She was born at 3.6 kilos and is now more than double that weight. So more than half her body mass is just converted lactation.

Yet another fascinating idea courtesy of Human Babies:
Composed of and powered by milk.