Business as Usual in South Korea

Things are trundling along nicely ever since I earned my freedom from the university labbatoirs. I've landed a new job, which I shall talk about freely in due time.

And Heather and I have taken out a bank loan for a new house. 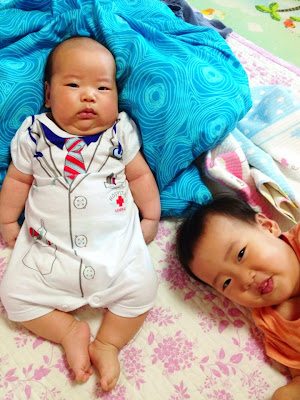 Alex and Baengy also continue to do well, as babies do when administered with sufficient levels of nutrition and sunshine. Baengy is speaking more these days, mostly in Korean, and has yet to outgrow her fetal name. Mr Alex, on the other hand, spends most of his days in quiet contemplation of what I imagine to be the raucous ongoings of the Farrand house. I will post more, when time permits.

For the meantime, all I can offer for your interest is an article I wrote for Seoul Selection, a rather nice magazine in Seoul to which I think you should heavily subscribe if finances permit. The article was liberally cropped for publishing reasons, and maybe because of its slightly gloomy choix-de-nuance. I wrote it as a permitted distraction around the same time I was writing my thesis papers.

The article was asking bloggers in Seoul what they recommend in terms of places to go, things to eat and things to drink. My original entry in its humble glory is as follows:

- What is a place in Seoul that you think people should visit and why?

Sorae Maeul - French Village, Bangbae-dong.
Seoul may not be initially lovable to every traveling connoisseur of the developed world's megacities. Repetitive units of suburbia can induce a subdued state of directionlessness when traveling the city by taxi, while the same by city bus adds a hint of vertigo to the experience. Apartment blocks litter the urban landscape, like armies of colossal tombstones, from which the odd glass skyscraper can be seen rising up, frozen in its historical bid to escape the clamour of convention below. A gargantuan automated subway that is its own obsessed demon, places Seoulites wherever the algorithm of life destines them to be with an aroma of wicked efficiency, while sweeping up in the human river those who stumble or lose their way. Into the darkness of Seoul's underbelly it will take you, popping out into the grey sunshine every once in a while, to present its sardine-like passengers with views of the mighty Han river, itself appearing like a Kraken Gandalf on its own slow stampede toward the mudflats of Incheon. Should you find yourself heading south on such a blasphemous mode of transport, I highly recommend alighting at a station called Bangbae on the green line. Within the leafy confines in which only a chosen few can reside, lies not so much a diamond in the rough, but more of a welcome reprieve within a vast urban outdoor dungeon. Sorae Maeul is a small streety area, peppered with foreign restaurants and glinting in the healthy glow of a French community hidden to the naked eye. Here, one can find such rarities as recognisable bread, unsweetened pickles and Seoulites commuting by foot in an unhurried manner. Although I don't visit the Promised Land frequently, it does feature in my daydreams from time to time. It's a reflection not of what Seoul really is, but perhaps of what it may earn to someday be.

- Can you recommend a place to eat at and why?

생고기 4,900
Wedged unassumingly between an unremarkable real estate agent and the misnomer of an Outback Steakhouse near Exit 1, SNU Station, is a medium-sized barbecue restaurant called Saeng Gogi 4,900. The name means 'fresh meat 4,900', which, as you may note, appears to reflect the owner's disregard for appetizing descriptions. Here they basically sell two items, fatty barbecue pork and duck meat, for barbecuing on heavily sloped pans that inevitably gnash and spit with displeasure at whatever visceral contents are plopped onto their searing surfaces. Assuming that you are not seated at the dreaded Toilet Table (so named for its intimate proximity to the site's ancient lavatory), one can have a pleasurable dining experience. The lack of a fixed door to the back of the restaurant adds an element of outside influence to the smokey atmosphere of the noisy room. This place is generally crowded, not least because of the reasonably priced and fairly tasty meat, but also, as I like to think, because of all the things it doesn't try to be. The sign above the self-serve banchan trolley warns of a 5,000 won penalty should you overstock your chopshi and not entirely devour the fruits of the weathered ajummas morning labours. And the meat is good. It tastes good and people come to buy it. Despite my insecure propensity for uninvited wordiness, I feel I wouldn't be doing the place justice if using more bourgeois terminologie. The flies and the heat coalesce with the cacophany of neighbourly diners shouting above the din of sizzling pans, for what I imagine would be an atmosphere akin to a Namdaemun market samgyeopsal festival. And the occasional solar flare caused by a random sizzling ball of oil leaping for freedom from the frying pan will ensure that more than the recommended weekly intake of anaesthetizing soju is consumed.

- Can you recommend a place to drink at and why?

Littered amongst the urban sprawl and as synonymous with daily Korean life as kimchi and plastic surgery can be found the modern Korean convenience store. At carefully calculated intervals they sit, like a dispersed monument to the logistical revolution, ensuring that a steady stream of discount processed foods are always within reach of the modern weary traveler. With their inviting lights bringing the brilliance of a desert day to the gloom of a solitary post-hweshik walk home, to their virtually guaranteed stock of fresh(?) triangular kimbabs, these friendly metropolitan equivalents of the bygone speakeasy serve more than just Minute Maid juice(?) and Denmark Milk with an arbeiter's smile. Through some divine act of grace bestowed upon the Korean expat community ever since the first Germans brought beer to Korea, at no place in Seoul is cheap alcohol not within reasonable walking distance. While probably not al-fresco in the intended spirit of the term, one can often pull up injection-molded chairs and an umbrella-impaled table, sit, and enjoy the scenes of the passing local milieu. A number of foreign beverages are usually for sale, along with the local industrial fluid confusingly labeled as three distinct brands. For those practicing the forgotten arts of inebriated alchemy, I highly recommend a mix of soju and aloe vera juice in the bottle. It rivals Hemingway's Death in the Afternoon.

Hopefully, I will post some more updates on this blog before it becomes nothing more than a stagnant collection of unvisited memories dwelling in the moody backwaters of cyberspace.
Until then, I wish you good health.