Well it's been a pretty normal time here in Korea. By normal I mean lots of teaching, eating and drinking in no particular order. 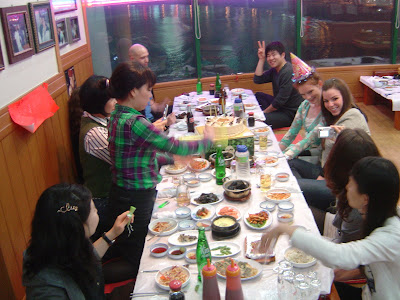 We had a staff dinner down at Gwangan again last week. It was to welcome our new teachers and to celebrate Meaghan's birthday. Out the window is a nice view of Gwangan beach, which I am beginning to appreciate a little more than Haeundae. It's nicer and a little more relaxed. Bunny-earing at the far end of the table is Paul, one of our new admin staff. 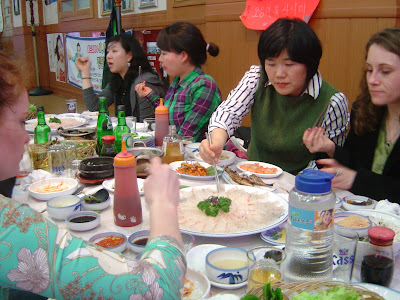 We had Korean-style raw fish and drank soju. I always appreciate these dinners because the food is good, it's free and we all get to drink together. What more could a staff dinner require? 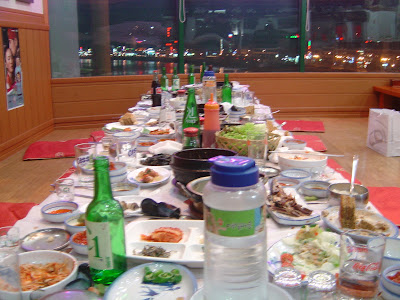 Here's the aftermath. At these sorts of places they always serve the odd peculiar side dish, like sea squirt (which they serve cold and crunchy) or sea snails (which are more effort than they're worth, in my humble opinion). 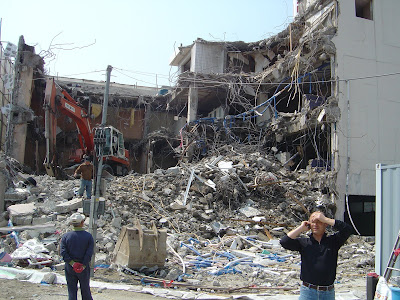 On the way to work the other day I saw a Korean demolition team and had to stop for a photo. They've been pulling up a lot of the roads around Haeundae, too. I guess they're preparing for the busy summer season. 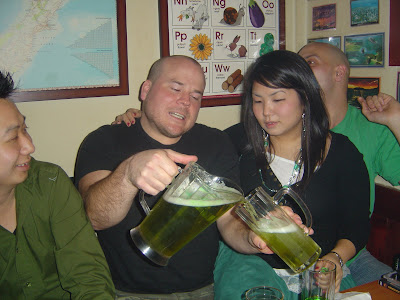 And then there was St. Patrick's day, which is only really celebrated by the ex-pat community here. We headed down to the local Irish pub, which is owned by an Australian. Here are the English teachers, packed tightly into a little booth, drinking green beer. I can't remember this part of the night so well. 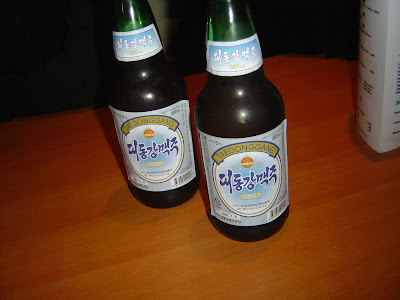 Recently the pub started selling TaeDongGang beer, which is brewed and bottled in North Korea. Needless to say, I couldn't resist the temptation when I saw it on the menu. It's well priced (about 5 dollars for half a litre) and tastes pretty good. I'd say it's similar to Heineken in taste. The label is what I find most intriguing. I like to think it conveys a sense of post-cold war isolationism. 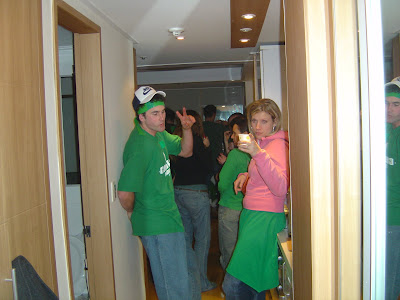 Then we headed off to Mitch's house to sit around for a while and drink cheaply. John has a lot of friends on the eastern side of town, so it's like a flash mob any time we're at an apartment. They're a friendly bunch. 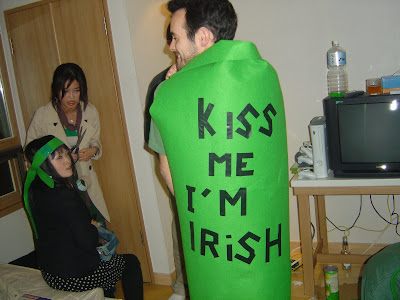 One of the traditional Irish costumes that were hastily tailored and donned for the night. The writing was formed using electrical tape. Ingenius. 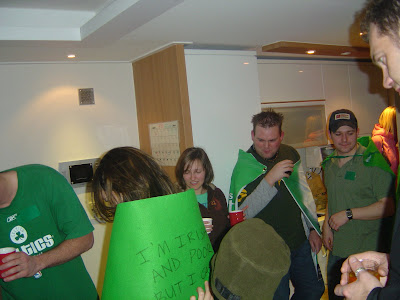 After a moderate and reserved amount of merriment, we headed off into the urban jungle to celebrate whatever it is that St Patrick's day is for. 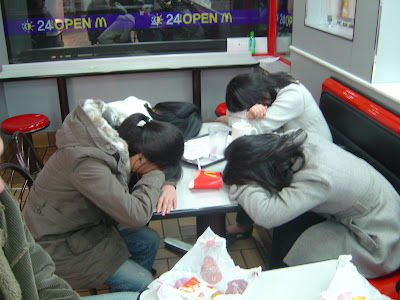 It was an interesting night and lots of fun. In the morning we decided to eat at McDonald's, which is a ritual we partake in after a long night out. Next to us were these four girls, who remained sleeping like this for the whole time we ate. 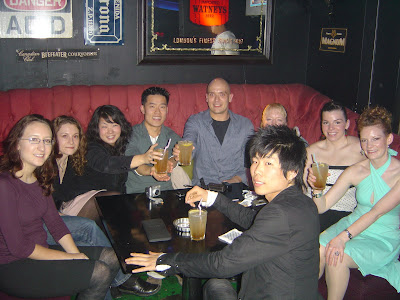 Then at some indeterminable period of time later it was Jef and Meaghan's birthday. We started it off with drinks at the New York bar, which has been a reliable starting point for any night out. You may be getting the idea that we English teachers in Korea drink excessively. It's all relative. 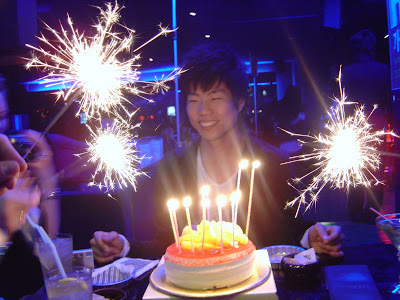 We had a couple of cakes that night. I don't care much for cakes in general, but this one had some nice fruit on it. In this picture, it looks like it's Kyungwon's birthday. That's because I was squished in my seat and couldn't get an angle shot with the birthday people in it.


I shot this video a while back at the New York bar. A Korean bartender is impressing the crowd with her skills. In her hand is a flaming bottle. Check it out. 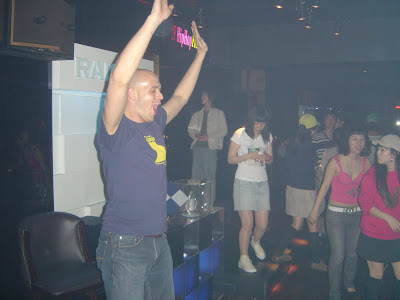 Here's Jef dancing at the cigarette stand in Foxy bar. Because Jef is big and bald, he can always expect a certain amount of attention when he wants it. Right now he's doing his special Club-Med dance.


This video is from a while back and is a little stranger and funnier. On the stage is a dancer we saw in a booking club. He was doing this Zeus style dance for a good half hour or so. Then he pulled off his pants and threw them away. Meaghan and Elisa got pretty excited. 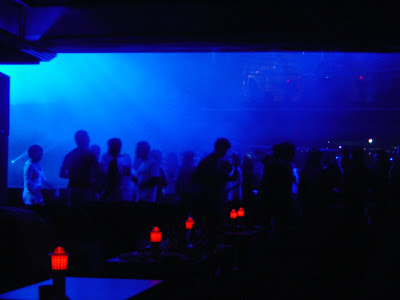 Booking clubs are interesting places which are supposed to facilitate dating. Guys and girls meet in private rooms or in the lounge and hook up. I've been a couple of times and had drinks. Apart from the astronomical alcohol prices and ex-gangster security guards in tuxedos, they're not bad. 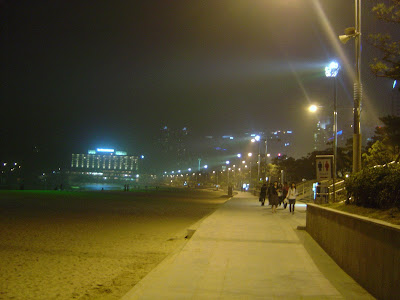 The other day we had a lot of hwangsa, or yellow dust in Busan. Hwangsa is composed of fine clay particles that blow in all the way from the Gobi desert in China. It's been more prominent over the past decade due to increasing desertification. You can notice it a lot more in real life, but in this photo it's most visible as cloudiness around the light beams. 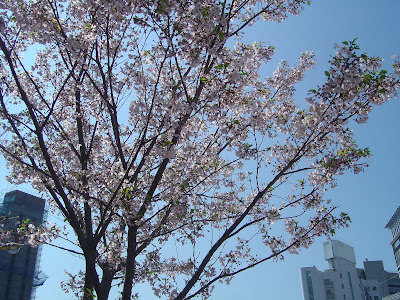 Spring has just arrived and the cherry blossoms are starting to come out. This tree is on the sidewalk at Haeundae beach and I walk past it on the way to work. Hopefully this weekend I'll be able to get some better photos.

Next weekend there's a rave party in Seoul, so we might be heading up there. Should be good. See ya!
Posted by Lee Farrand at 1:50 pm