Every year on the west coast of Korea in a small town called Boryeong, there is a mud festival. For any warm blooded English teacher, the equation is simple: Beach + Mud + Beer = Yes, I will be attending. 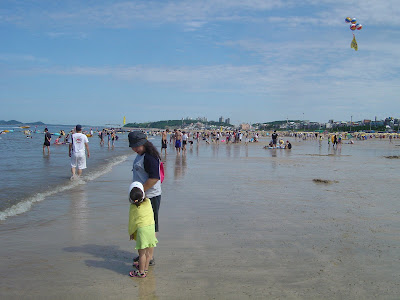 For $70 we took a package that included transport, dinner and accommodation. The bus ride took us about 8 hours, so it was good to finally arrive. Boryeong itself is a nice little place, reminding me of Victor Harbour in Australia. The main beach stretches for about 4 kilometres. 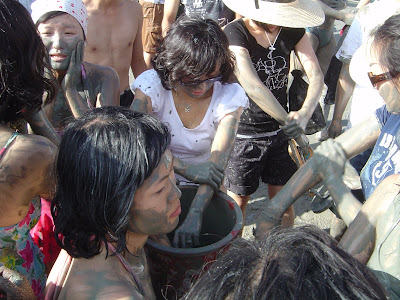 Boryeong mud is a very fine and grey silt mix that is supposedly good for the skin. So the first step was to lather up from head to toe. The second step was to politely apply mud to spots that others had missed. The third step was a little less clear, but seemed to involve mud flying through the air and occasionally getting pelted by said mud. 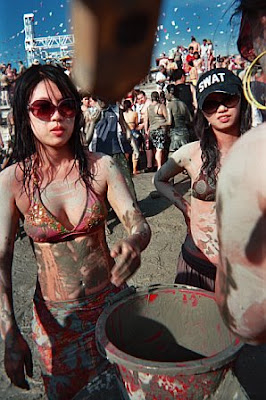 Some photogenic Koreans getting in on the fun. The mud is actually pumped from the seabed and transported to the beach area. Council workers hand out buckets of it for free during the day. Photo: Jef Robison 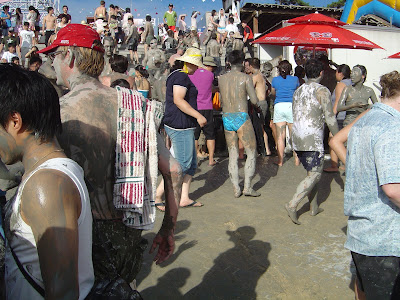 The mud festival is well known in English teaching circles and about half the crowd were expats. Addition of mud made it more difficult to distinguish friends and strangers. 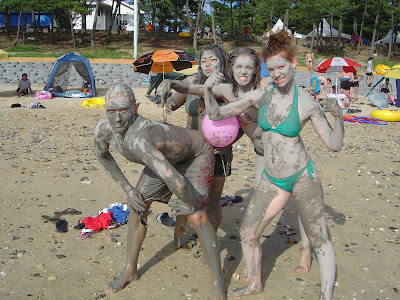 The Busan crew posing for a calendar shot. It is a surprisingly refreshing feeling to realise that there is a point when you can't get any muddier. 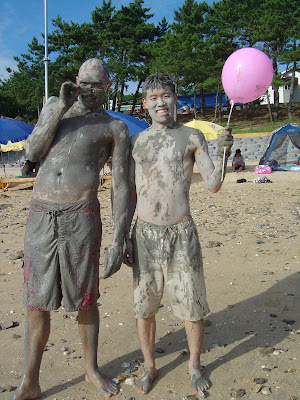 Here's me and Jef after working in the coal mines. Yes, I'm the one holding the balloon. As the mud began to dry, it started caking off and crumbling. Eventually even making small facial expressions resulted in little clumps falling off. It kind of felt like you were a statue magically brought to life. 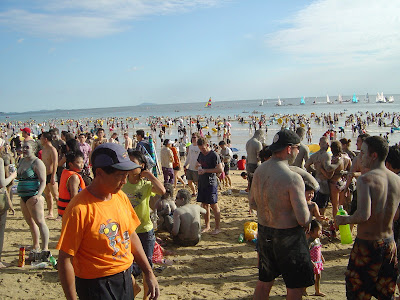 By the end of the day there were a lot of people on the beach. Sailboats were out in the harbour and the odd jet ski about. The mud acted as good sun protection too. One of the strange things my American compadres were keen on was sunbathing. In Australia it's not so popular because we don't have much ozone. 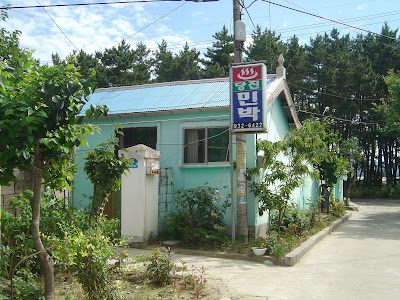 Our accommodation was in a minbak, which are common family-run cheap rooms similar to a hostel. You basically get sleeping space, a community toilet and a cold shower room. It's tolerable for an overnight stay in summer. 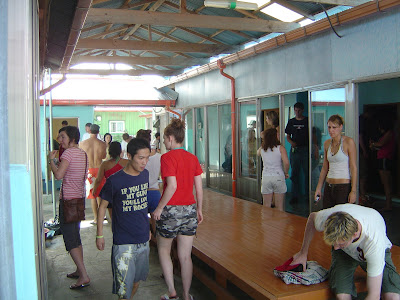 Here are the facilities from the inside. There were about 50 of us that came on two buses from Busan and Daegu. 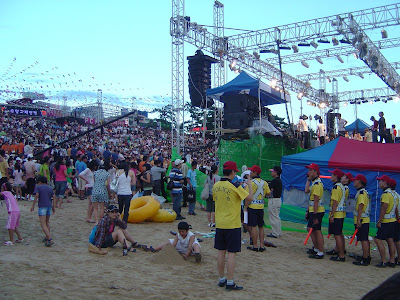 As night fell, people began to gather around the main stage on the beach for a concert. Those orderly policemen in the yellow shirts just seemed to be standing there for no reason, other than to look like an orderly line of yellow-shirted policemen. Males in Korea have to do military service at around 22 years old and many of them opt to do it in the police force. 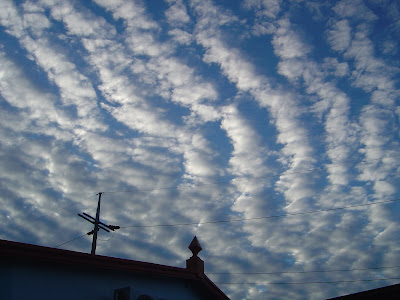 Some of the cloud patterns toward dusk, which were prettier in real life. Altocumulus I believe. 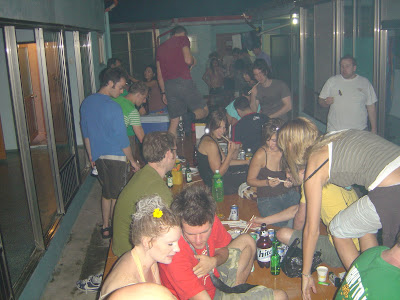 The ladies organising the tour cooked a big meal, mainly consisting of barbecued bacon. When I first came to Korea, I remember being surprised at how much fatty bacon is eaten here. These days I just eat it and think about other stuff, like how difficult it is to find a good sandwich. 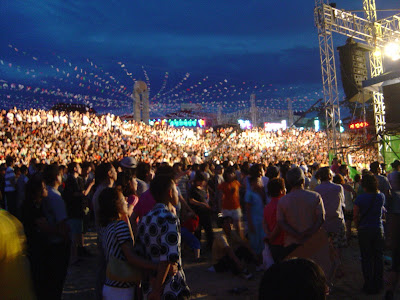 The concert at night seemed to have some famous people involved, evidenced by private security escorts for the singers. The front area was too crowded, so we spent most of the night on other areas of the beach, drinking and enjoying the warm air. 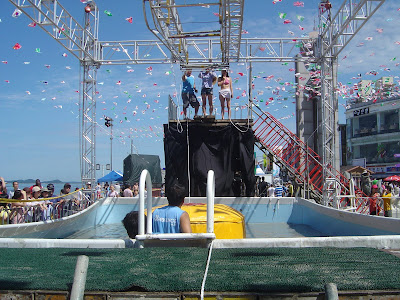 The next day I woke up a little late and had a lazy tour of the day's activities. This setup was near the main road and was attracting a crowd. From what I could deduce, landing on the floating yellow cushion without falling off resulted in a prize. 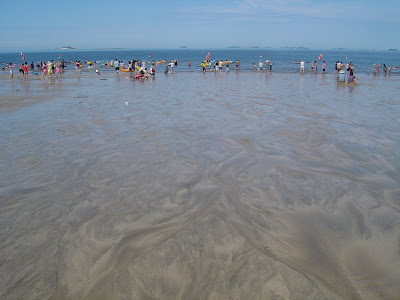 All in all, it was a good weekend away. This curious pattern you can see on the sand is common on Korean beaches and is caused by water that slowly emerges from the sand and makes its way into the ocean. I'm pretty sure that it's fresh water, seeping out of the water table which would be higher than sea level after a lot of rain. I guess Australia never gets enough rainfall for that to happen. 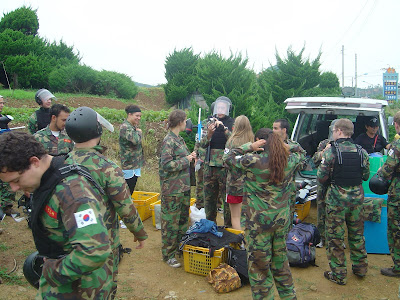 The next weekend we went paintballing down at Seongjeong beach. A bunch of us met up in Jangsan and got suited up in army fatigues. I'd done it a few times in Australia already and it's a lot of fun. 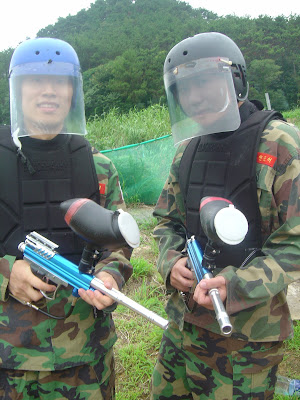 Me and John showing off our gear. I guess my team was the UN. In Korea, insurance isn't compulsory so it's a little cheaper to play. If you've never been paintballing before, it's something worth thinking about. The guns use a CO2 canister to shoot out pellets of paint that break on contact. They can shoot about 30 metres accurately and leave a nice bruise if you're hit at close range. 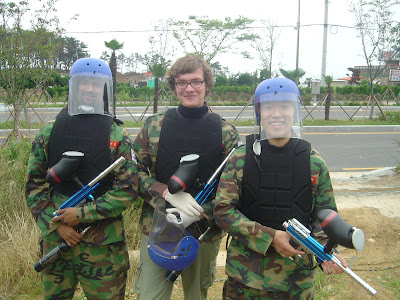 Tino and Sebastien are two German exchange students we met at Katie's birthday. They're here studying biotechnology, would you believe. So that kinda got me thinking that maybe I could continue with that career here. It's an idea I'll explore later in the year. After all, English teaching can only get you so far. 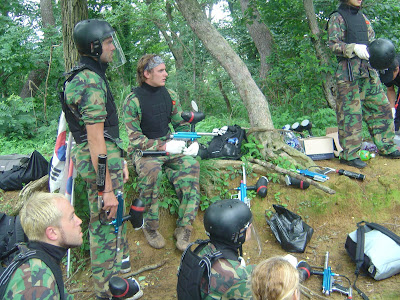 Pre-mission briefing. We had our own bases and mainly played 'Capture the Flag' type games. The whole playing field was a big jungle with piles of logs lying around. 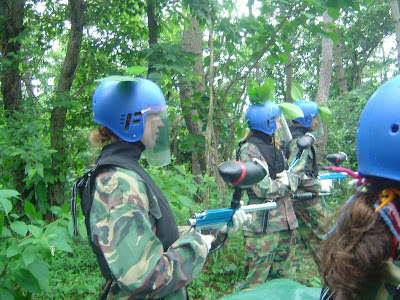 Our blue helmets gave us a slight disadvantage in the jungle environment. So some of us created our own form of camouflage by sticking foliage in the air holes. It wasn't very effective, but it's a funny thing when a blue leafy helmeted person gets shot. 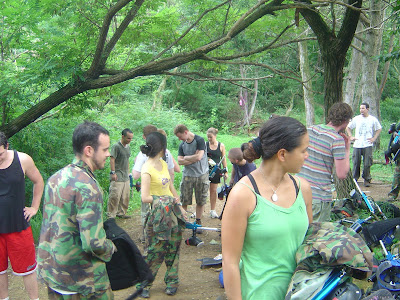 Running around the place in summer while wearing so much protective gear can get you very sticky. But it's never such a bad thing when everyone's dirty together. I call it 'The Mutual Hygiene Deficit Effect'. 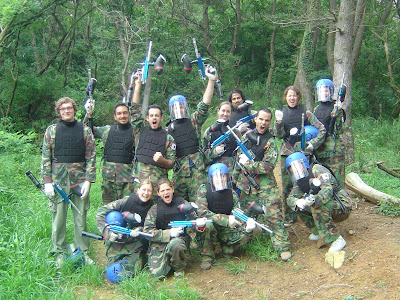 Here we are after a victorious capturing-of-the-flag. I think I'm squatting down the front there. If only our students could see us like this... 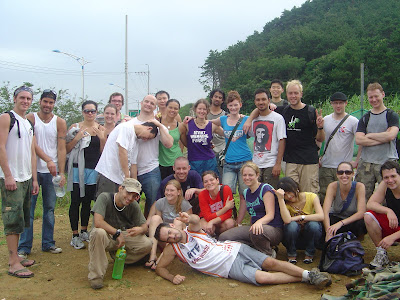 And here we are back at the drop-off point, filthy, fatigued and flamboyantly fun-filled. One good afterthought I had at this point was to bring kneepads next time, because you tend to be kneeling and ducking a lot. 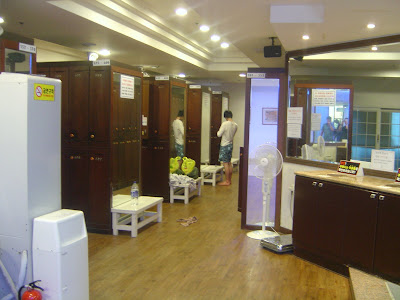 So after that, Sebastien had the brilliant idea of going to a chimchilbang, which are large public bath and sauna houses. A very nice way to get clean and relax, especially in the aromatherapy tub. 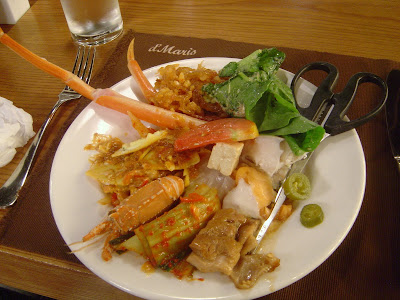 And after that we went to the D'Maris buffet in Jangsan. All you can eat seafood for $30. Needless to say, that basically left us falling asleep in our chairs.
Sometimes I feel bad for having such an easy life. What a good weekend out.

If you're a little bored with your life and have time to spare, why don't you think about a year in Korea? Ah, now I'm just rambling. See you next time.
Posted by Lee Farrand at 8:04 pm

You did all this in 1 day? Was the paintball thingy basically like S. Korean vs N. Koreans or was the uniform just S. Korean overall?

The mudfest trip was a weekend away, but the paintball and everything else was on the same day.

The uniforms were the same, just with different helmets.

hey, this is Eric..
im here now in daegu city.
just got a question, where can i find that paintball site?(exact address or person to contact)


our batch is planning to have an activity, and paintballing seems to have much fun. hoping to get a reply.

Hi, where is that paintball field you guys went? Do you have their contact information? Do you also know any other large scale paintball fields in Korea?

Mudfest looks awesome I have never seen that before! Those helmets don’t look like the helmets I’ve used before, they look more like riot helmets, I used to book any paintballing, they have good deals on there so it might be worth checking them out?