Halloween and a Kitten

This is the latest addition to our household, a 2 month old kitten. Her Korean name is 삼순이, but her English name is Cat Farrand-Ngo. 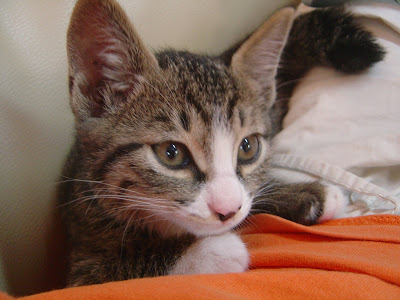 We'll talk more about her later. 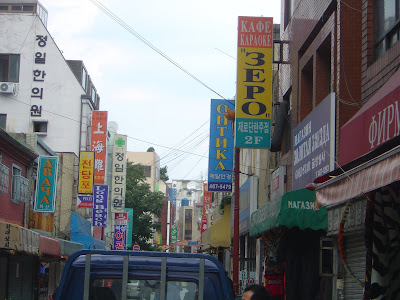 Although I've been in Busan for a year now, I'd never got around to visiting 'Little Texas' or Foreigners Street' which is near the harbour. It's a blend of multicultural themes, kind of like a rainbow chinatown and it has a seedy reputation for being frequented by individuals who like seedy areas. What does that mean? I'm not entirely sure.

There's a fairly large Russian population in the city and I've never had much contact with Russian culture in general. Russian writing reminds me of Greek. 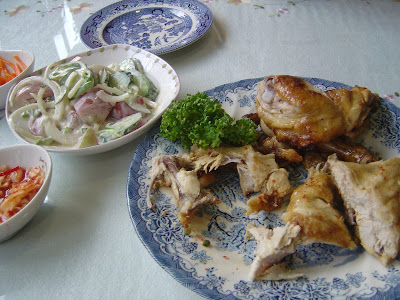 We ate in a Russian restaurant and I was expecting some stroganoff, but apparently that's not the only thing they eat in Russia. Our lunch consisted of potatoes and chicken, in a minimalist-style cooking approach. It was alright. 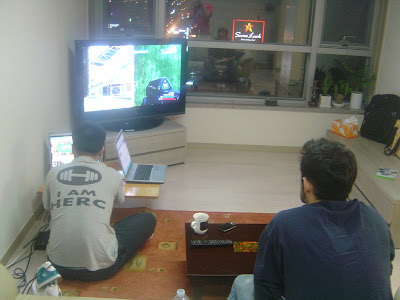 John and I decided to buy a television to compliment our newly enlarged living quarters. After investigating the options, we ended up buying a brand new 42 inch plasma screen. It's awesome. In Korea, electronics are cheaper because of companies like LG and Samsung. This one cost us 1.4 million Korean won, or about US$1500 (and that's with the new exchange rate). The equivalent model would be about double the price back home.

In this photo, Tim is playing Halo 3 online through an X-Box 360 modem, while John is using wireless internet on his laptop. We broadcast our public wi-fi signal 24 hours a day, so that anybody nearby can use it for free. Our apartment has an excessive amount of connectivity, throughout the different rooms there are 4 cable TV and 10 modem ports built into the walls. We only ever need to use one of each. 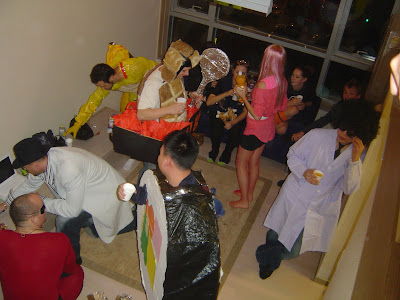 Halloween was never really celebrated in Australia and I was always under the impression that there was supposed to be a spooky theme to all the costumes. Apparently not. Jef and Elissa hosted this party and there were a variety of ingenius outfits. In the foreground there is John, as a giant piece of kimbap. Holding the large silver spoon and dressed up like a dog at the back is Austen, whose costume was 'dog soup'. 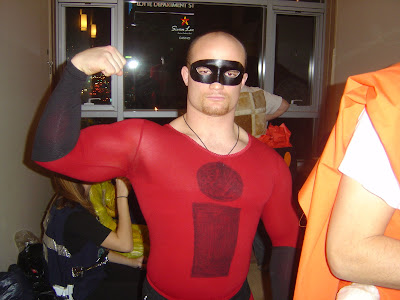 Here's Geoff, an American football player and English teacher who dressed up as Mr Incredible. He's a very friendly guy and actually went to his class like this to surprise the kids. Later on in the night he got a little drunk and ran onto the road pretending to push back trucks and cars that were waiting at the traffic lights. 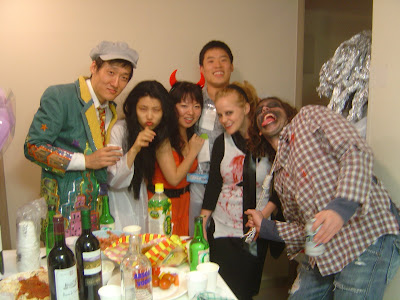 After my first real Halloween party, I was able to conclude that it was all simply an excuse to dress up and drink a lot. We'd do that often in Australia anyway, just without the dressing up part. 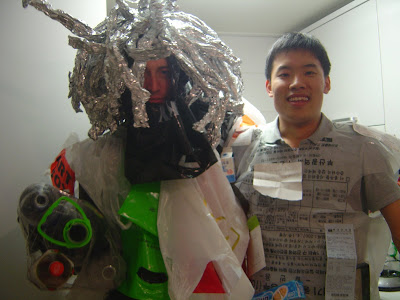 My outfit, at minimal cost, was ilban-sureggi (or 'general rubbish') man. In Korea you have to buy special waste bags to dispose of general rubbish, as opposed to food waste or recyclables. I put some armholes into a 50-litre one and sticky-taped some examples of general waste to it. But this guy on the left seemed to do it much better. One of those plastic bottles was actually filled with alcohol that he was drinking. He told me his name, but at parties like this I tend to forget these things for some reason. 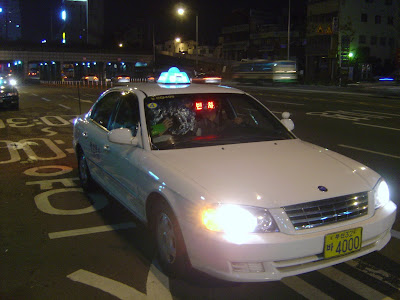 And here he is getting into a taxi to the second venue, after a considerable amount of effort. 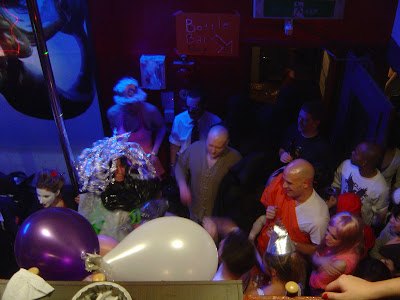 The second venue was the PNU area, where there were a variety of costume parties. One of our friends won a $100 bar tab. 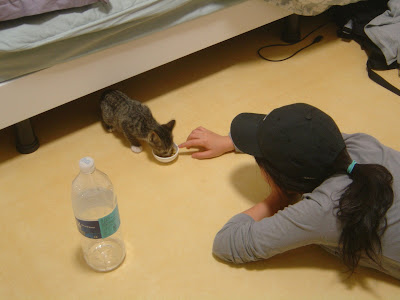 A friend of a friend found a dead stray cat on the side of the road one day, with three kittens meowing next to it. So he put them in a box and took them home. He was looking for new owners and we ended up taking one. I've always been more of a dog person myself, but after a few days with a kitten, I've come to appreciate the feline species a lot more. Her Korean name (Sam-Soon Li), comes from a tv show character. She's very cute.
The cat, that is. 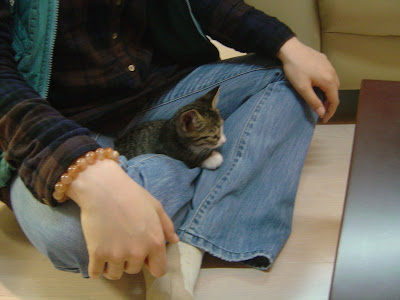 She's very friendly and playful. I managed to clip her nails (with a notable amount of kitten-protest) the other day and so she's destroying our materials slightly less now. She is already toilet-trained and meows like a squeaky door when she's hungry. She also meows when she finishes eating, just to let us know. 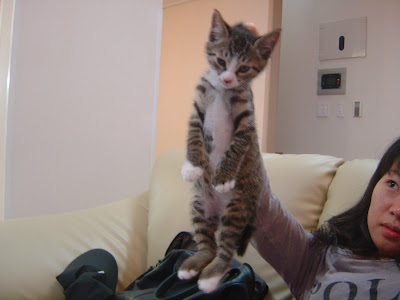 An interesting biological feature of kittens is when you pick them up by the scruff of the neck. This can be safely done up to a few months of age, and is usually done by the mother when they need to be moved somewhere. Whenever we pick her up like this, she turns her head on the side and keeps completely still, until you put her down. She also tucks her feet up like a little bunny rabbit, which I would assume is so that they don't drag on the ground. It's a useful mechanism to exploit when she suddenly starts chewing on the cushions. 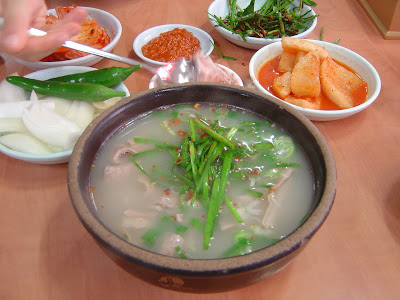 One of the dishes I've been recently warming to is dwae-ji-guk-bap. It's basically a pork soup, with a whole lot of strange looking pork pieces in it. It's really good. I've been finding that a lot of the food I eat nowadays is completely different to what I typically ate in the first few months here. 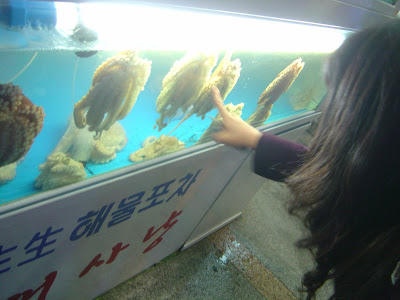 Aquariums in front of restaurants still grab my attention. These octopi were unusually large. If you buy a live octopus from the fish markets, they just put it in a shopping bag for you and you take it home while it constantly tries to escape its doom. 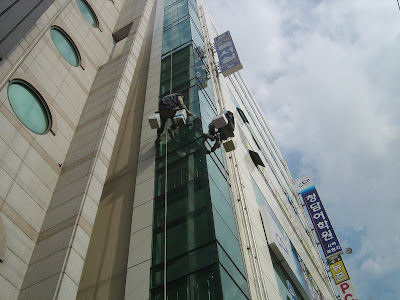 Arriving at the hakwon one day, I saw these abseiling window-washers cleaning our windows. One of my long-standing daydreams has always been to give this job a try. You'd get to peer into people's offices while enjoying nice views of the city.

These guys weren't using any real safety equipment, just an adjustable plank to sit on. And below them was no warning sign if they dropped something. If you think that's dangerous, you should see the construction workers here. They just walk around on scaffolding 10 stories high without any safety equipment. Other times you'll be walking on the street and all of a sudden a gaping hole in the sidewalk will appear, without fencing around it, just a couple of witches hats. Korea in general has a more 'watch out for yourself' policy. On the whole, I think it's a good thing, considering all the lawsuits that go on back home over very common-senseless incidents, and the ridiculously high cost of public liability insurance. 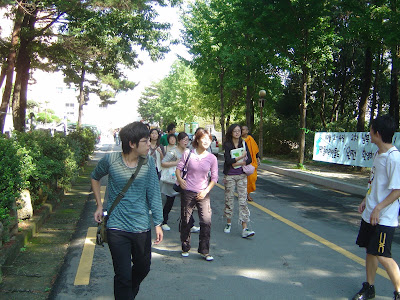 Korean school has been going really well. We're approaching the end of the term soon, when we'll graduate and have a holiday. I've learned a fair bit, but it will be nice to have a break. This is from one of the special events we had last week. We took an excursion out on the campus and had an outdoor lesson for hangeul (Korean writing script) day. 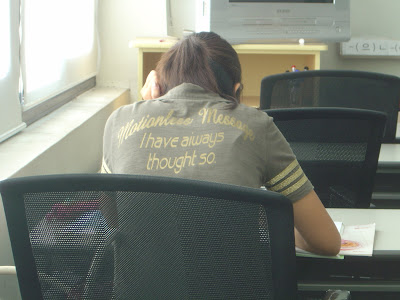 This is a shirt that Ki-woo, the student in front of me at Korean school wears sometimes. It always makes me ponder. The writing says "Motionless-message: I have 'aiways' thought so". 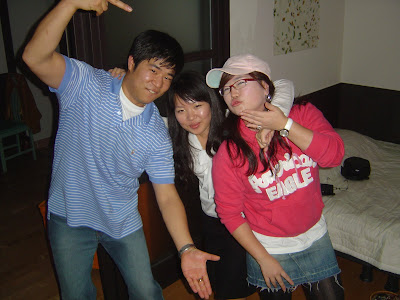 Saying goodbye to the Lee's Korea Blog readers this week are the Chungdahm Institute administration staff, at Michelle and Jordan's housewarming party.

They're saying: See you next time!
Posted by Lee Farrand at 12:16 am

thaaanks! see you next time!

the kitten was cute =) but is it really ok to cut her claws like that?

Yup I just clip the edges so they're rounded instead of pointed. When she jumps on our legs now she just slides off.

Wow! Love all the pis you keep posting on your blog. Makes me miss Korea. I was just telling Tae Yang that we should move into an apartment like the one you're living in when we live in Busan.