I was talking to Polish Damien in Australia today and he told me that on my blog "It pretty much looks like all I do is eat, party and travel." I think that's the first ever blog critique I've had from a Polish guy. Muchly appreciated. It's his 27th birthday today and I'm sure he'll be celebrating in style with the guys back home. Happy Birthday Damien! 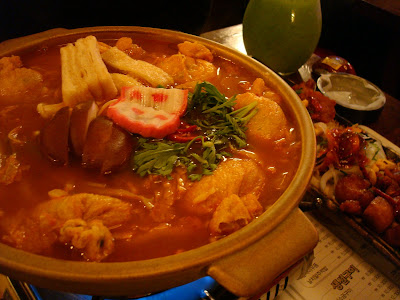 In this photo is an U-dong hotpot with stuffed pockets of aerated soybean and various other goodies. On the right is some sundried chilli cashew chicken. We chose to enjoy this particular meal with some apple and kiwi soju cocktails. 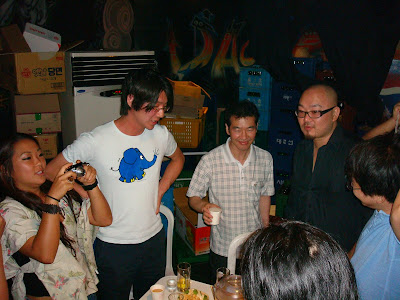 Some time ago, a group of adoptees came down to Busan for a quick tour and we met up after work for some drinks. I'm pretty much the only GOA'L affiliated adoptee down here, so I feel like an ambassador of sorts.


Here's a new drinking game that Eric taught us that night. Two lines of people are on either side of the tables. Each person in turn (one after the other) has to drink the beer from their own paper cup and then put it on the edge of the table. The next person can only start drinking once the previous person has flipped the cup so that it lands properly on the table. The first line to finish wins.

We played this game a few times. 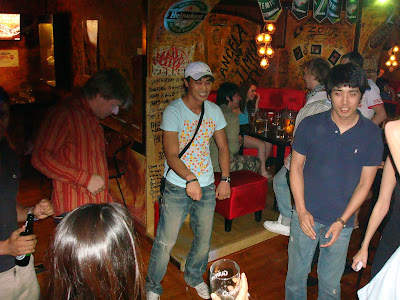 I led the group to the U2 bar in Haeundae, somewhere I hadn't been in a while. U2 is fairly nice and they serve free popcorn. The owner speaks a fair bit of English and likes to drink tequila shots. 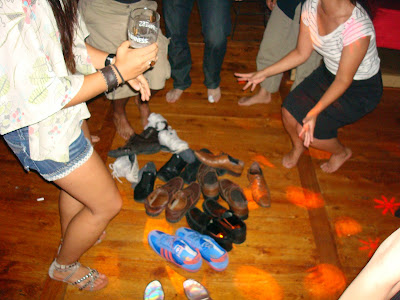 One of the European adoptees decided it would be a good idea if we all took our shoes off and danced. Mine are the brown ones in the centre. 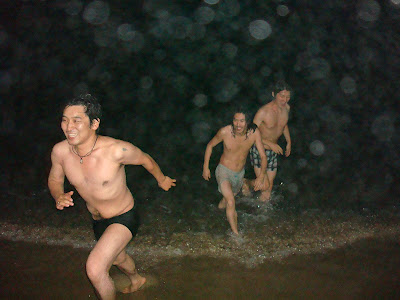 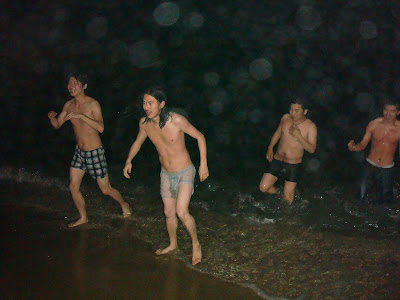 Then Eric thought it would be a good idea if we all went for a swim at the beach at 2am. I wasn't particularly in the mood for it, but was eventually persuaded. Catching the taxi back home with wet pants in the wee hours of the morning was an interesting experience.

I also lost my old cell phone at some point that night. 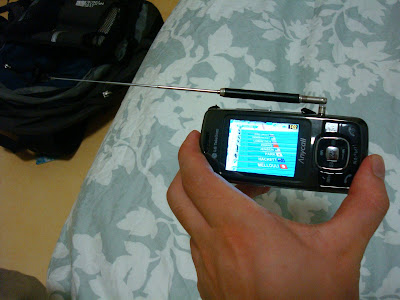 Meet Lee's new and improved cell phone. It has a DMB connection, which means I can watch free television broadcasts on a few different channels. On the screen in this photo there's a Beijing Olympics replay of Park Tae-Hwan winning the 400m. 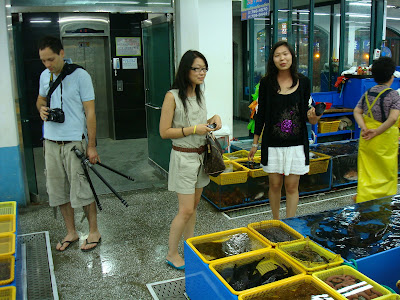 Soon after the other adoptees left, Marie Fleur, another French adoptee from Seoul came down for a visit. I didn't have much time to show her around because of work commitments. We had a walk around Gwangan and visited this live seafood shop. That's her on the right, with her sister and sister's husband. Live seafood still impresses me to some degree and it's funny to see how the little Korean kids can just pick up an octopus like it's a toy. 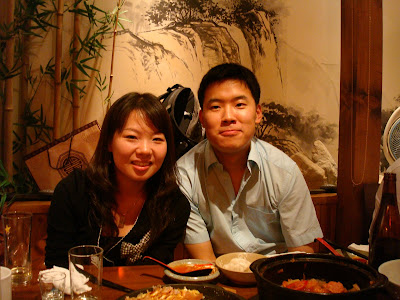 Heather and I are going fairly well these days. My only regular teaching duties during the week are on Friday nights, when I head to her branch to teach an upper level reading class. That means I also get to join in their Friday night hwe-shiks (after-work dinners). 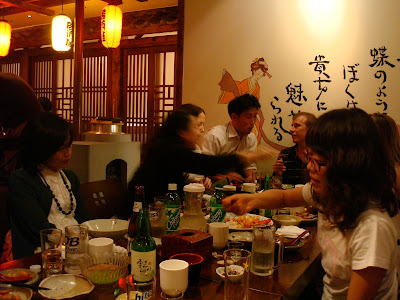 Here are the admin staff of the Hwamyeong branch. Heather received a promotion yesterday to the title of wonjang, which is the branch manager. We've both come a long way since our humble beginnings at the old Busanjin branch in 2006. 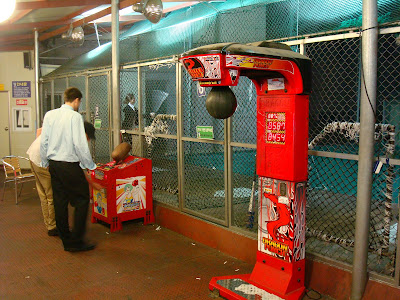 Near our house there's a small unstaffed amusement outlet. In this photo, you can see two versions of the ubiquitous punching machines here. You put in a coin and get to see how hard you can punch. You also find out how easy it is to sprain your wrist by trying to impress your friends. 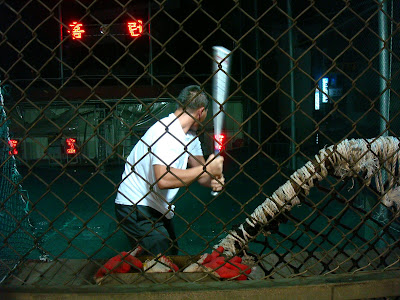 Here's Anthony, one of our new additions, in the batting cages. These were entirely coin-operated as well. You just pick up the bat and a machine will launch baseballs at you. 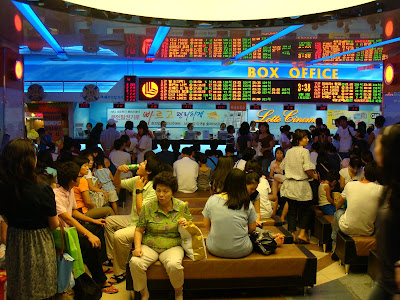 Have you seen the new Star Wars release? It's an animation based on Attack of the Clones. I've always been a big fan of Star Wars and Star Trek, but unfortunately showing an enthusiasm for such things here results in one being labelled a nerd. Jef's definition of a nerd is when someone owns a twelve-sided die (singular: dice). But I don't own one of those. 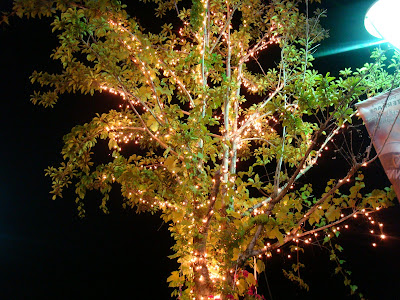 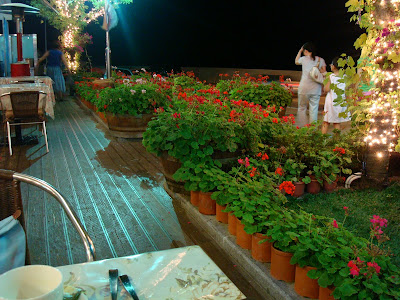 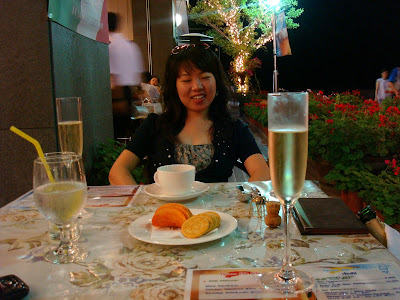 Heather and I found a new favourite restaurant. It's called Van Gogh's Terrace and it's in the Haeundae area near the APEC building. They specialise in particularly good Italian food and French champagne. It's right next to the water and you can see the Gwangan bridge at night. We go down here sometimes for a treat and are developing a worrying affinity for Moet & Chandon.


Most days on the way to work, Mr Segway (as I like to call him) crosses the main road at the same time as me. He's usually crossing at exactly the same time each day. This is the only Segway I've seen in Korea. He seems to like it when people look at him and ask him questions about his device while he's waiting for the lights. 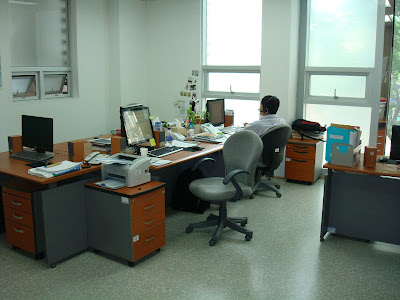 These days I work in the office at our company's headquarters in Dongnae. That's my seat right there in the middle. Next to me is Brandon Na, the human resources director and in this photo he's interviewing someone via Skype. My work duties include interviewing new teachers from overseas, guiding them in and general HR related troubleshooting. I also look after the April English program to some degree. 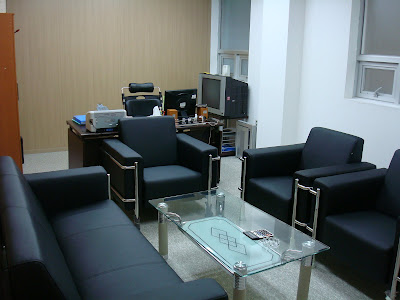 Here's the CEO's office. We only moved in here a couple of month's ago. 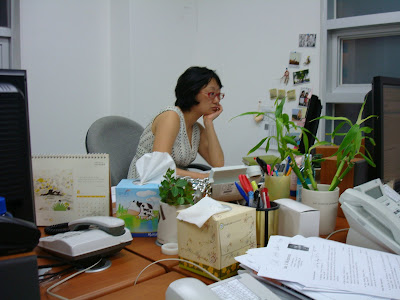 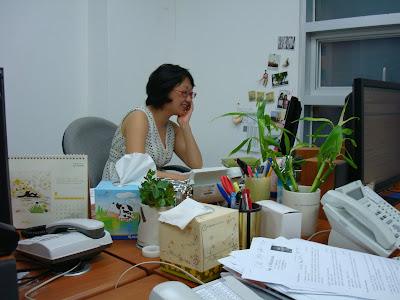 And here's our dear Kelly Park, who left the company last week for greener pastures. She's been working for us since the beginning and would often be found running around to the different branches or the immigration department. She was really good at fixing problems and watering plants. A few weeks before she left, she found a snail on her lettuce and brought it into the office in a plastic cup. Then the cleaning lady threw it away because she thought it was rubbish. Oh well.

The snail had eggs though, which we kept in a different cup. Hopefully they'll hatch sometime soon.

That's all for this time. See you!

My brother? HEAD INSTRUCTOR? He didn't even tell us!

did the eggs hatch?

did you get new snails? did they die?


i'd love to have snails as pets