A Scavenger Hunt and Ngo's Departure

From time to time, our school organises events on the weekends for the teachers to participate in. Jareb Steines, a teacher at the Dongnae branch, recently put together a Scavenger Hunt. We met up at Busan tower in Nampodong at 11am on a Sunday. 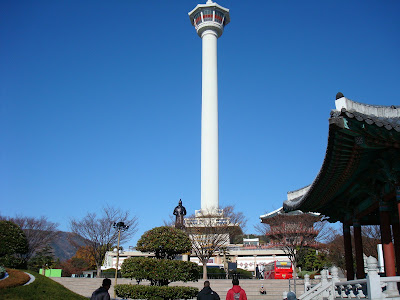 The idea of a scavenger hunt is to put together small teams of people and complete as many set tasks as possible. The tasks are usually things like "Collect three different kinds of flower" or "Take a photo of yourself standing next to a bridge." Completing the tasks necessitates traveling to different areas of the city, finding stuff out and having fun. 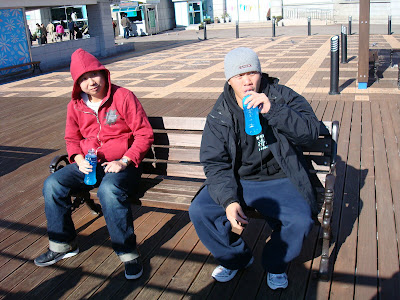 John, Anthony and I went out to show support. Having stayed out quite late the night before, we weren't in a particularly competitive mood though. For those of you who don't know, blue Powerade is a rudimentary hangover cure. 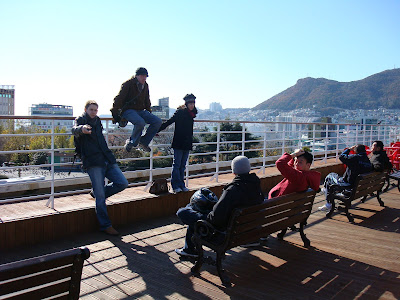 Although many teachers had said they would come, only six others including Jareb actually showed up. The 11am on a Sunday factor may have had something to do with it. 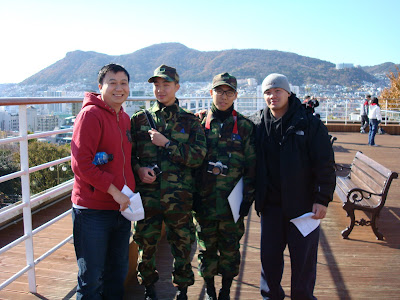 But we weren't about to let a good idea go to waste, so we formed 3 teams and started completing our tasks anyway. We would meet up in Seomyeon around 3 hours later and find out who the winning team was. One of the first tasks was to take a photo of two people wearing 'Couple-Ts', which are matching outfits that couples here often wear. But we couldn't find any so we took one with these military dudes. 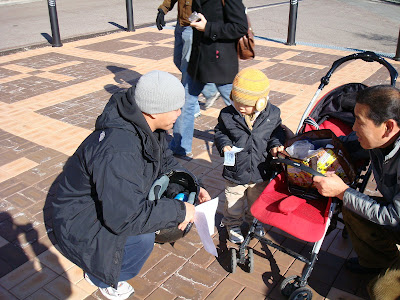 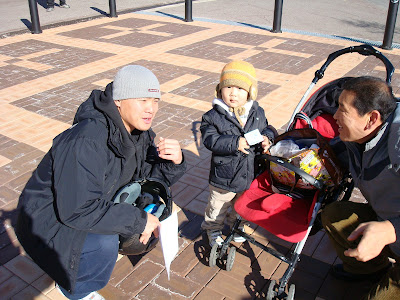 The next task we did was to "Take a photo of a team member giving W1000 ($1) to a kid under the age of four." Anthony did the honours.

I like the expression on the kids face: What is going on here? 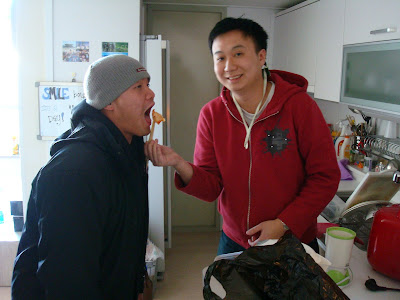 Here's John and Anthony completing "A photo of one team member feeding another team member kim chi." Why were we back home all of a sudden and not out competing, you may ask?

A: Because we were tired.

But we went out again soon after that. 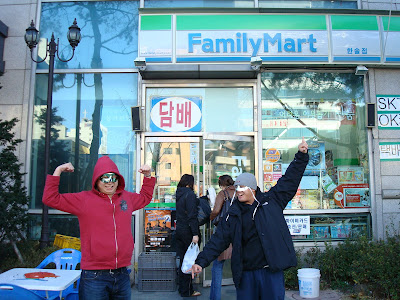 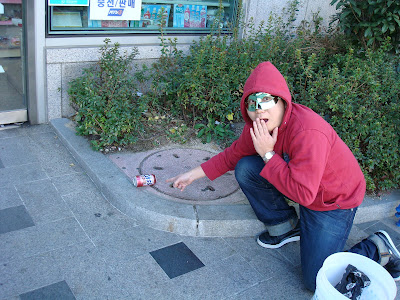 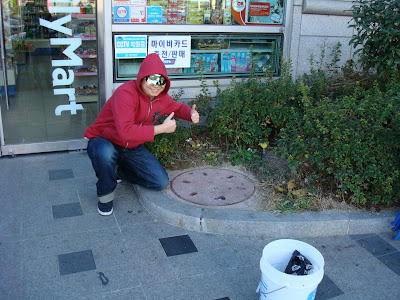 "A before-and-after shot of a dirty public place that has been cleaned up by the team." 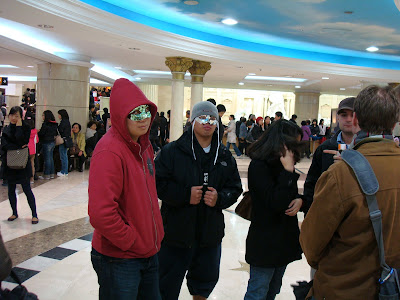 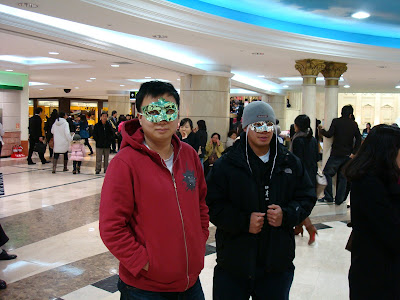 John and Anthony grew to enjoy the anonymity provided by their masks and opted to keep them on for the rest of the event. It's always a little bit odd when there are two masked guys following you around in a department store. Thanks to Anthony and John, I am now used to it.

Team Dongnae ended up winning the event, having completed more than forty of the fifty tasks. The winning prize was a high-five from Jareb. I'm glad we made it out though. 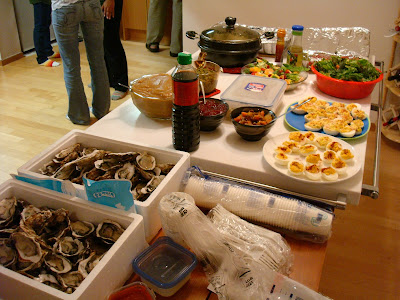 Devin and Tamara invited us over again for Thanksgiving this year. I still find the event to be a festive curiousity (for whom are the thanks given to?), but I'm never one to turn down a nice dinner. Different teachers from the branches had prepared a variety of dishes. 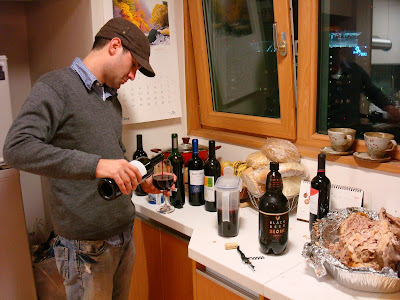 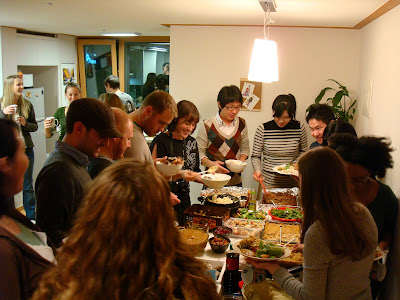 They had ordered two turkeys and there was plenty of food to go around. One thing I hadn't had in a while: Deviled eggs. 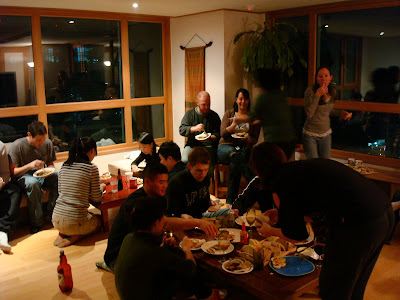 We ate and ate. I had three plates, which was a far cry from last year's record. But I'm on a diet these days and trying to condition myself for the cafeteria luncheons that I'll be surviving on in Seoul. 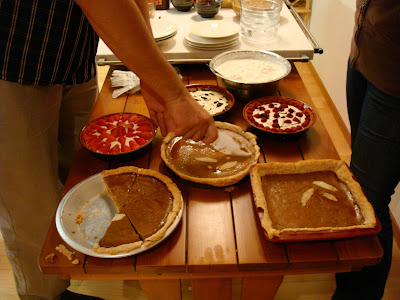 Homemade pumpkin pie or strawberries and cream anyone?

Although they look quite nice, one thing that Anthony and I have in common is that we never enjoy eating sweets.

Cake, donuts or cream buns? Ewww, no thank you.

It's a different story for John though. 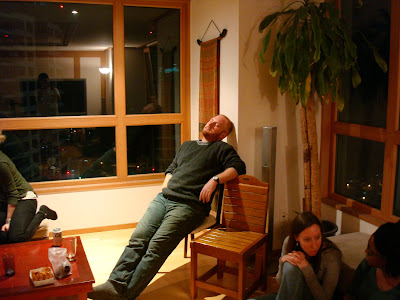 All the food and wine was a little too much for poor old Vince, who promptly fell asleep on the wall. 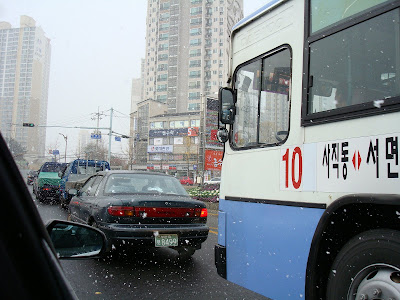 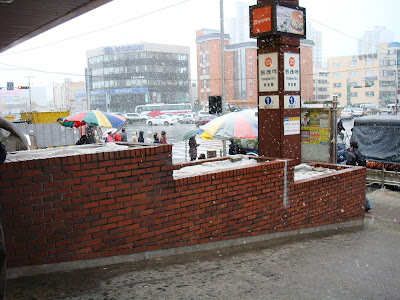 It snowed quite heavily in Busan last week. On average it snows here about twice a year, so it was very rare to see so much. It's never enough to make a snowman out of, but I am always hopeful. 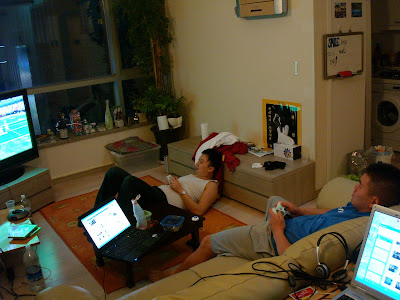 John and I moved into our apartment in Seomyeon more than a year ago. At that time, it was quite expensive to get the key-money (deposit) together. But we scraped up enough dough and have been living together for quite some time. In Australia I moved house more than 31 times (I lost count at 31) since I left home at the age of 16. Having lived with so many different types of personality, I can safely say that John is a very easy person to live with. I've never seen him irritated for any household related issue.

Everyone has what I call a 'default mood', which is the mood that they are usually in when they wake up in the morning and nothing significant has happened yet. John's default mood is blank and happy, which means he's open for suggestions as to the days activities and is always feeling pretty good about things.
We decked out our house with boys toys: an X-Box 360, 42 inch plasma screen, poker set and a hub that allows wireless multiplayer. In the photo above, John and Anthony are playing Madden '09. We spent a lot of weekend afternoons like this. 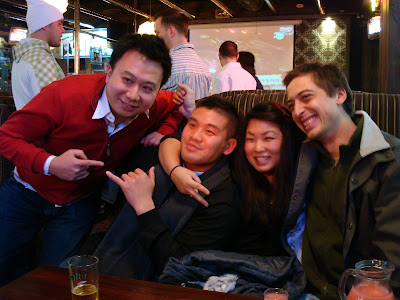 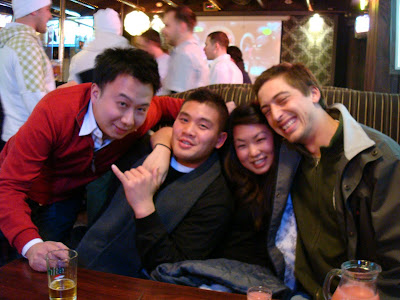 But all good things must come to an end. After spending a solid 2 years in Korea, John's contract was up and it was time for him to head onto greener pastures. Seeing as he's heading back to Canada in the winter, I guess they're not really greener pastures so much as snowier pastures. Anyway.

We had a farewell party out with friends the weekend before. He may be coming back to Korea sometime in the future. 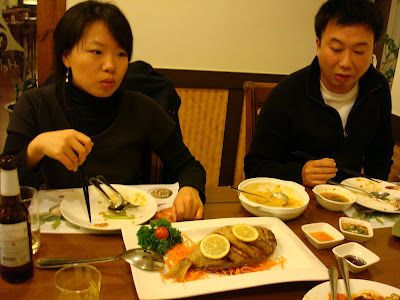 Anthony, Heather and I took him out to our favourite Thai restaurant in Busan. It's at Haeundae beach, very close to the Queen's Motel. The dishes are typically small but very well flavoured and the service is excellent. 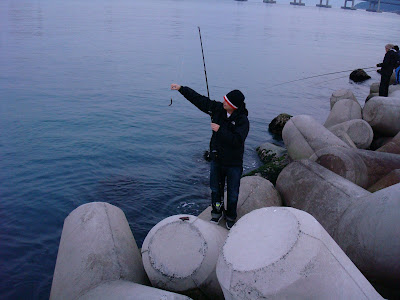 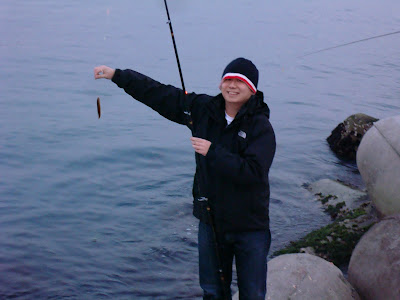 We also went fishing, which we were supposed to do more often after we bought our new fishing rods. We went out to Gwangan on Sunday and it wasn't long before John caught the first fish in our fishing history. It looks like a piece of seaweed or something in the photo, but in real life it was flapping and did have gills. On such an auspicious occasion such as this, we decided to be noble and set the Leviathan free. 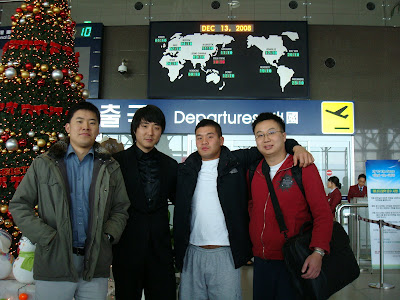 Here's me, Joon, Anthony and John at the airport, right before he left. 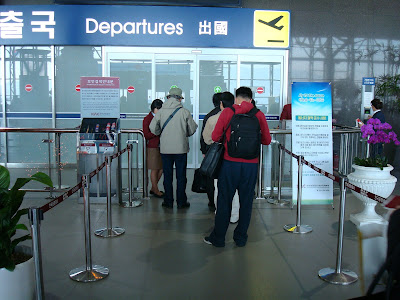 The problem with Korea is that everyone has to go home at some point. But every ending is a new beginning and it's better to think of the good times we've had, rather than the company we've lost.

See you next time everyone.

Lee, your blog compels me to buy a camera. What do you use?

Quick update Lee, nice. Maybe I'll restart my blog once I get bored after Vietnam. I just need a concept.

I believe you still owe me some Moet Lee for that prime catch and Anthony owes me some late night festivities for eating that paper...

that sounds kinda gay... not that there's anything wrong with that...

Hi George. I use a Sony DSC and would recommend getting a camera. It's easier just to show people than having to describe everything that you see. It also draws more non-English speakers to your blog.
Good cameras are Canon, Nokia and Sony. Get something small and between $200 - $400. If it's too big, it's usually a bother to carry around. You'll also probably drop it from time to time.

John, 'pepper' and paper are two different things. Also, because this is Lee's Non-homophobic Korea Blog, the correct terminology is Gray. As for a concept, how about Ngo-ing Somewhere?

Love the blog - been looking at it for about 1 year.

Ah. That would require me to start a new blog.

Nice post Lee! I love to "experience" Korea through your blog...lol. Its the best I can do for right now, until I get my life to a point where I can make the move.

Your statement "The problem with Korea is that everyone has to go home at some point.", doesn't seem to apply to you. It looks like your starting a new life in Korea!