Korea is an interesting contrast of socially conservative yet technologically liberal viewpoints. On the one hand you'll have a rigid social hierarchy and the encouragement of submission to elders, and on the other hand you have Aegis-equipped destroyers and 90% of the population owning a mobile phone. But I guess a land of contrasts is always going to be more interesting than a land where everything makes perfect sense. 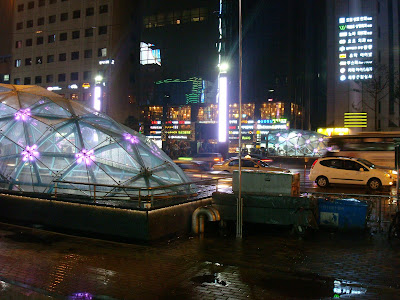 This is exit 6 in Gangnam, a focal point for post-midday meet-ups. Across the road you can see some dazzling vertical light poles. These are a new addition to the city and are interactive 'meeting aids'. You can tell someone to meet you at one (they're numbered), and they have all sorts of information about restaurants and things to do in the nearby area. Each one has its own phone number, so if you're going to be late, you can text message the pole and the message will appear on a screen so that your friend can see it. You can even get it to take your photo and it will email you the image. 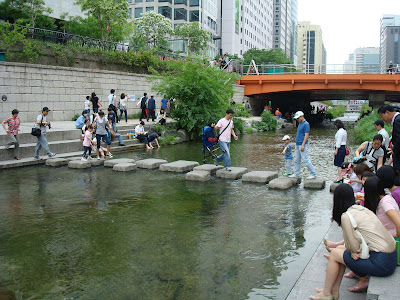 This is the artificial CheongGyeCheon stream that runs through central Seoul. It was the brainchild of current president Lee Myung-Bak back when he was the mayor. Although there was a lot of opposition to its construction, after it was completed it became hugely popular with families on the weekends. 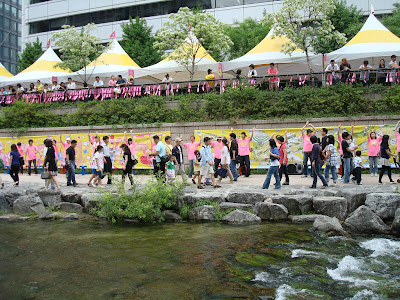 In this photo, all of the people in pink are doing synchronised aerobics to promote fitness. Koreans have an affinity for synchronised things in general, and dance-aerobics are performed together by supermarket workers at special times during the day. A few years ago, some guy called Sun Myung-Moon got thousands of couples all married together at exactly the same ceremony. 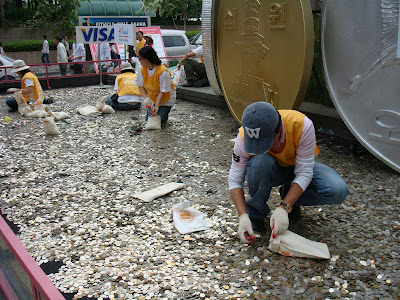 Recently World Vision held a community donation event near City Hall. People came and threw their coins into this pit throughout the day. When I was young, I always had dreams of swimming in money, but now I think it probably wouldn't be so enjoyable. 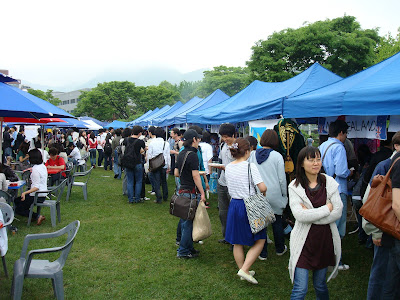 A couple of weeks ago, Seoul National University put on an international food event. International students were allowed to set up stalls and sell traditional foodstuffs to the university community. We had a browse for a while but only the Uyghur and Pakistani students seemed to have previous cooking experience. The French students made French toast, the New Zealanders made sausages and the Chinese made ramyeon. 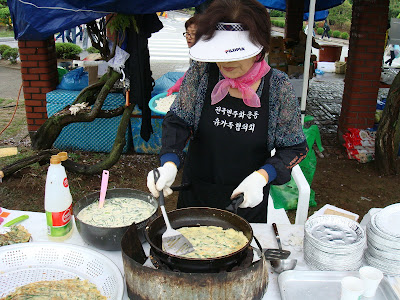 I had a class at 1pm that day and the ticketing system was too complicated so we went to the Korean outpost, patrolled by a cadre of ajummas. 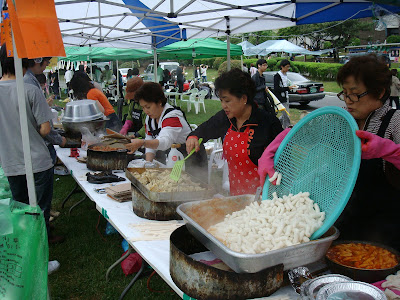 Here are the ajummas busy at work. An ajumma is a broad term that refers to any middle-aged married woman. In Korea I've heard them described as being as fierce as a lion, and having the femininity of a cement truck.
But from the ones I've met, I'd describe them more as hard-working, blunt and rough, but also caring and compassionate. 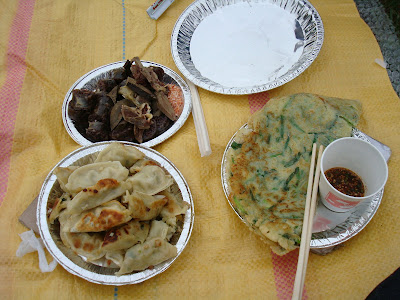 These are some staple Korean dishes that you can find everywhere. At the top left is sundae, which is an intestine sausage made from mung-bean noodles soaked in pork blood. It tastes a lot better than it sounds. The colour is a dark brown due to the oxidation of the iron in hemoglobin. It's a little similar to how a rusted nail will turn from red to brown. Below the sundae are mandu, ubiquitous Korean dumplings that are usually stuffed with meat and chives. On the right is a pajeon, a wheat pancake that is characteristically eaten undercooked, when compared to the texture of a western pancake. It was all fairly good. 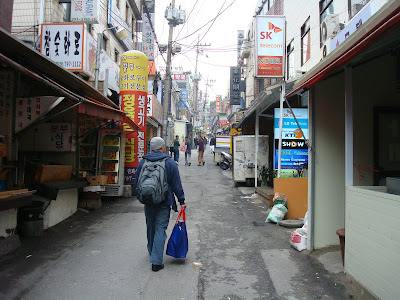 Anthony came up for a visit a little while ago and we hung out in Itaewon. This suburb in central Seoul is fast becoming my favourite place to visit. It has a high concentration of foreign residents, with all of the benefits that multicultural communities enjoy. 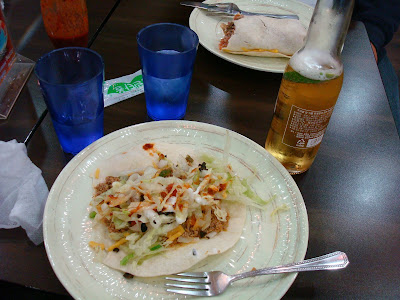 And in my books, the number one benefit of multiculturalism is the variety of food choice. Anthony and I found a little hole-in-the-wall Mexican taco place on one of the side streets and decided to stop for a snack. I had a single soft shell beef tobacco, that you can see in the photo. It came with home-made Tabasco sauce and was fantastic. I gave it a 9 out of 10.

And yes, if you look closely, you can see that there's a real lime floating in the Corona. 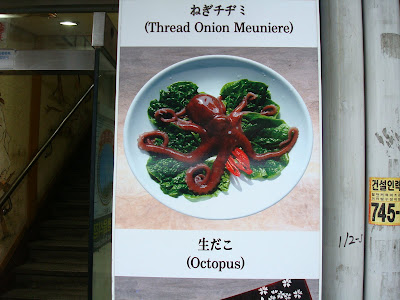 One thing you quickly notice in Korea is that what Koreans consider an appetising picture is often entertaining. The home shopping advertisements on late night tv here will sometimes show a family intensely enjoying a meal cooked by some nifty device. My favourite ad was one that had a crab-cooking machine, and there were close-ups of the crab being slowly eviscerated and pulled to pieces to show the succulence of the meat.

Oh and there was this other funny ad that featured a water purifier. After a lengthy 'scientific' discussion on how good the filter was, the presenter poured himself a drink and tasted it. You should have seen the look on his face. You'd never think that filtered water could make someone so ecstatic. 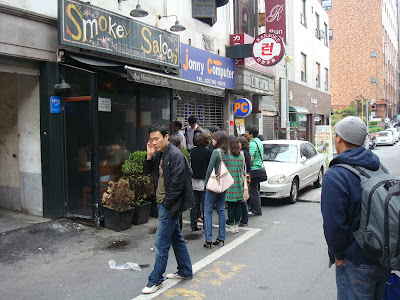 One place that had caught my attention a lot was this burger joint called Smokey Saloon. Every time I walked passed it, there was always a line up of people, which is a sure sign that they're doing something right. After a bit of dilly-dallying around (Anthony and I are both slow deciders), we agreed to eat lunch here.

There are only a few tables inside, but if you order take-away (or 'take-out' as the Americans say), you get express service and they even ring you when your order is ready. 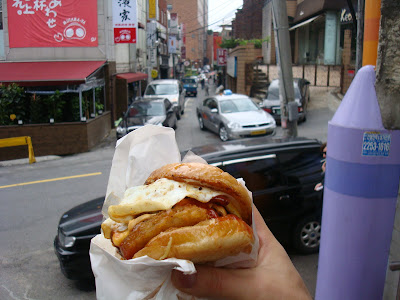 This burger is called an Ambulance. I think it's named that way because you're likely to get a heart attack after you eat one. We sat down on some steps to investigate. On the bottom is a large hash brown, and there's also crispy red bacon, cheddar cheese and an egg. The meat patty was very large and the flavour was spot-on for what a hamburger patty should taste like, meaty, juicy and smokey. The buns were soft and slightly crunchy from being lightly fried in butter. I think the dressings were a mixture of a light barbecue sauce, tangy mayonnaise and tomato sauce. My verdict was that it was quite possibly the best burger I have ever eaten, although it loses marks for composition due to its unwieldy design.
Anthony was less impressed. But Anthony is what I like to call a 'burger-minimalist', one who only likes bread and meat with no condiments. No mayonnaise, no egg, no vegetables. Cheese or sesame seeds on the bun are likely to get a raised eyebrow or even two raised eyebrows. Hopefully he'll learn to appreciate the burger-renaissance that occurred after the 1920s and one day be using condiments like tangerine honey mustard or rosemary balsamic vinegar. 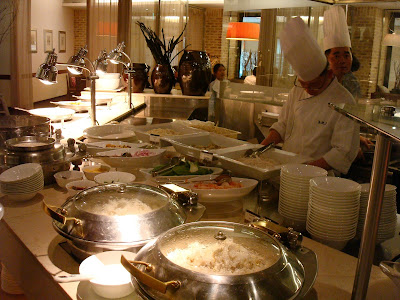 Our professor took us out to a restaurant at the Grand Intercontinental Hotel on a Friday. In the first level basement of the building is a buffet restaurant with everything from roast duck to tuna belly. 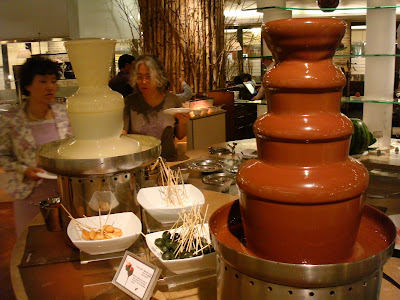 On the left is a cream fountain and on the right is a chocolate one. You dip your fruit on a stick in them, kind of like a fondue. The chocolate one reminds me of a topping you can get in Australia called Ice Magic. It's a runny chocolate that goes on your ice cream and in a few seconds you can remove it as a crunchy shell. It never failed to amaze me. 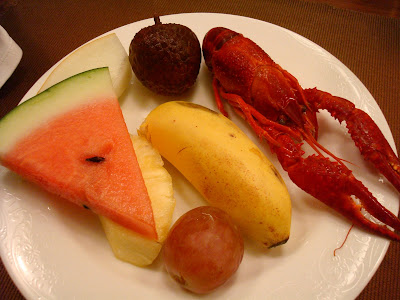 You know you're somewhere fancy when they have scampi on the menu. These miniature crawfish taste like a cross between lobster and shrimp. Half the fun is getting the meat out of them. 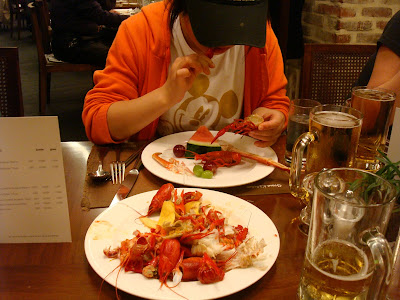 Here's Hu-Mei from Sejong University who came to join us. She developed an instant affinity for the scampi and ate around 15 of the little critters in under an hour. Although it was her first time to try them, she quickly worked out how to use her teeth to crack the shells in all the right places. She'll probably turn up in fairytales that scampi parents tell to their scampi children if they don't do their homework. 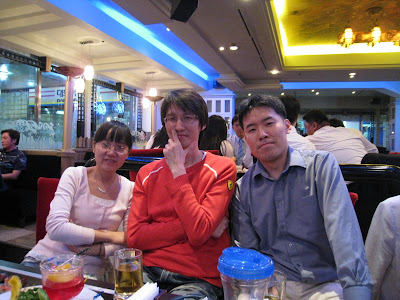 After that we went to a second round of drinking beer. Sitting around and getting tipsy with a camera can be pretty fun. Here's our first photo that was fairly modest. On the left is Chen-Jing, then Yong-Sung (one of the nice seniors in the lab) and then me. These photos are all from Chen-Jing's camera. 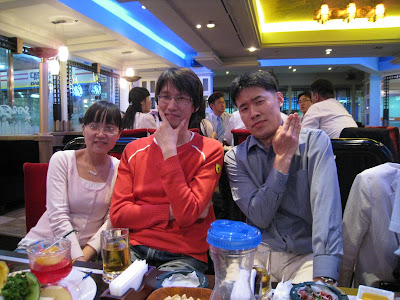 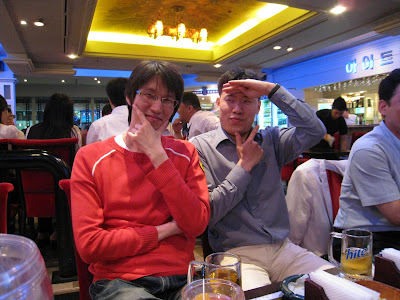 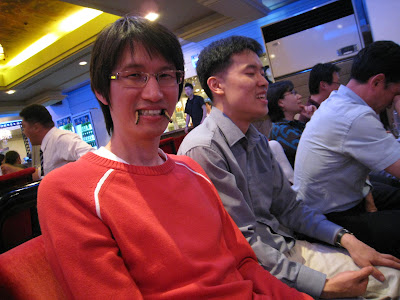 As we drank progressively more, our photos became increasingly creative. There's nothing like a 3 litre pitcher of beer to bring out the hidden artist in all of us. 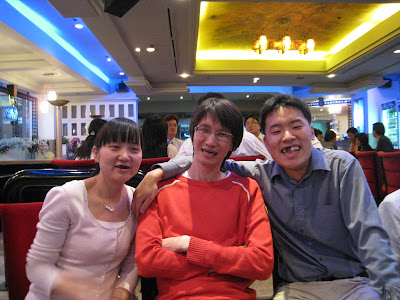 This is us with seaweed in our teeth. I believe we were aiming to represent 'country-folk'. 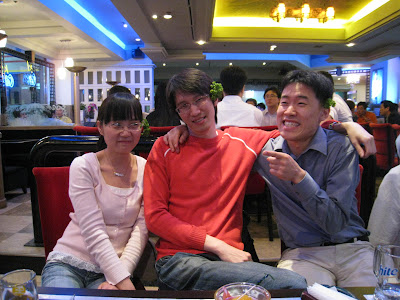 And here's us with parsley in our hair. At this point we were experimenting with more abstract representations of the universe. All in all, it was an enjoyable night out.

I actually have enough photos for another blog post right now, but I'll chop the post here so its more digestible. Hopefully I'll have time to post them up in the coming week.

We need to go to Petra someday. Let me know when's a good weekend for you. Saturday lunch would probably work best for me.

Sounds good. Mi-Sook was also interested in Itaewon vegetarian food. Maybe we can meet up together sometime.

Hey do you know the name of the mexican restaurant where you got the taco? and where in itaewon it was?!?! please please i beg you, i miss mexican food way to much

Sure man. The Mexican place is really small. In Itaewon, you go to the front of the Hamilton Hotel. Across the road from the hotel is a street, leading away from the hotel (T-junction). Walk down that street on the right hand side. You'll find the restaurant about 100 metres down the road.
Good luck!