We arrived back in Seoul on Monday and are settling into the pace of normal life again. The wedding was great and the honeymoon was fantastic, with many good friends helping out at every step of the way. Now I need to sift through around 1000 images to share with you all, starting with the wedding.
That leaves me with an interesting problem: How exactly does someone blog their own wedding appropriately? If I were to keep the photos private, that wouldn't be very nice. And as soon as I start blogging it, I can sense that it will inevitably become a slight misrepresentation of our special day. This is a dilemma that we'll just have to get by with. 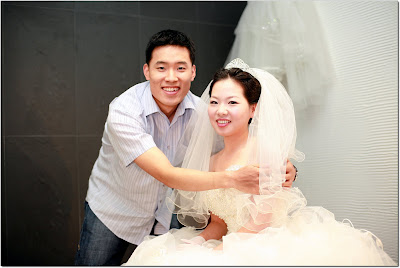 We woke up at Heather's house early on the morning of September 19th. Heather's mother had already gotten up at 6am to start cooking breakfast for us, and when I went into the kitchen she was still busy chopping things up. When you are about to get married, the 2 questions that people ask you most often are "Are you nervous?" and "Are you excited?"
The two answers that I would truthfully have to give on the morning of our marriage would have been "Not really" and "A little bit." Heather and I were feeling pretty calm about the whole ordeal, but things do get stressful as the ceremony approaches. It's not that the wedding isn't special, it's just that you don't seem to become noticeably overwhelmed with feelings as you might expect. For me, the time was spent focusing on the things that had to fall into place for everything to go well. A lot of planning had gone into that one day, and when it arrived, I thought that all we should do is just let it happen and hope everything works out.

And luckily, it did. 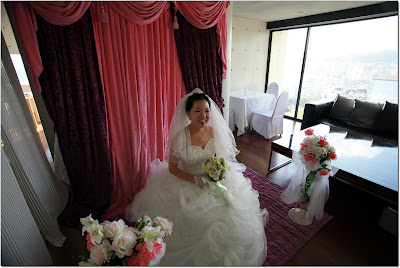 The wedding ceremony was due to start at 5pm, at an outdoor location on a hill overlooking the ocean. We woke up around 8ish, had a nice cooked breakfast and took things pretty slowly. Heather and I sat down at the dining table enjoying the calm before the storm. Weddings can be especially stressful for the bride, and I did have some worries that Heather might be a little under pressure. But sitting there at the dining table, picking at her mother's banchan with chopsticks and making little quips at the previous day's events, she seemed just as normal as any other day. 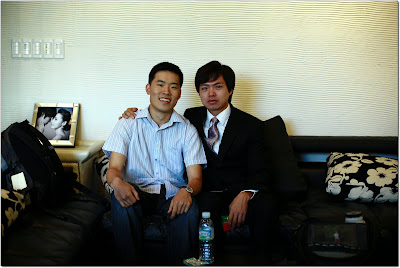 At 1pm we arrived at the wedding agency. The role of the agency was to organise the clothing and decorate the venue, as well as make sure things went smoothly. Weddings are like funerals, in that there's a lot of money to be made because people are more likely to spend lavishly. Our wedding agency had pre-wedding 'photography packages' on offer, the minimum being US$500. What you do is dress up nicely and have studio shots taken, which they put in an oversized photo album. Probably the strongest reason why you should get them done in Korea is because everyone will ask you whether you've done it or not. We opted out of it, just because it did seem like a silly amount of money, and how much does film cost these days anyway?
Instead, the agency provided the usual inclusive service of photographing the actual ceremony, and we also had Heather's friend, Adonis, come along and take photos of the day with his rather large Canon EOS. He took the photo above of me and Jang-Ho (Heather's brother), waiting in the wedding agency while Heather was having make-up done. All of the wedding photos on this blog post (and the next) were taken by him. Thanks Adonis! 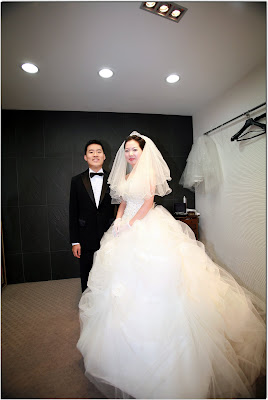 This is what we looked like after we were both dressed up and had our hair and make-up done. As you can see, Heather's dress was impressively large. She had an ajumma helper who hurried around like a worker ant, assisting the oversized queen ant to move around. 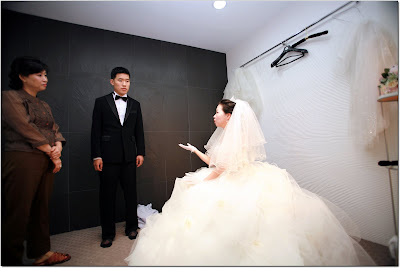 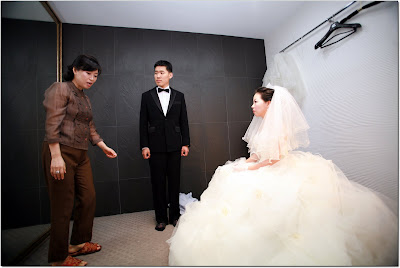 On the left is our lovely ajumma helper, who instructed us on all the things we needed to know about the ceremony. There's a lot to remember on the day, not just what happens in the ceremony, but also little things like how you should hold your hands in a photo and how to exchange wedding rings properly. Rehearsal is the best way to go, but we didn't have enough time to go through everything from start to end. 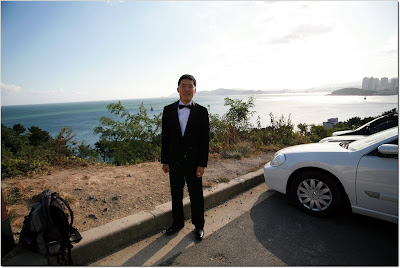 We arrived at the wedding venue at around 4pm. In the photo above is me standing in front of Haeundae beach, which would serve as the picturesque backdrop of our ceremony. The venue was the Korea Art Centre on Dalmaji Hill in Busan, with catering done by The Kitchen (the restaurant where we got engaged). The ceremony itself was held on the sixth floor terrace, which is an outdoor location on the top of the building.
Most people in Korea get married at special wedding halls, which hold multiple ceremonies per day. They're nice enough, and necessary for such densely populated cities. But Heather and I wanted something different, so we asked The Kitchen if they could do it for us. It was the first wedding that they had ever done, and was a little more complicated than expected. But I think it really paid off in the end. 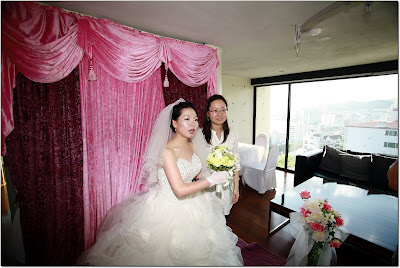 Heather arrived and went straight to the 5th floor to have photos taken with guests. Even 10 minutes before the ceremony started, she was still directing people and running the show from the confines of her 'bride hut' photo room. 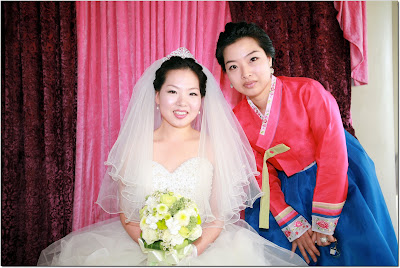 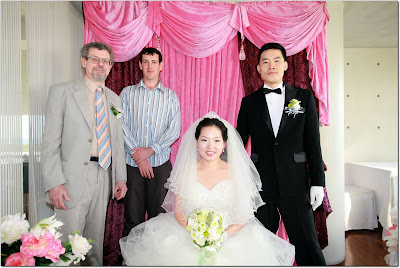 Here are The Farrands with the latest addition to the family. Dad and Chris made it all the way from Australia to be at the wedding and it was fun showing them around Korea. I was saying to Dad, that because I'm adopted and marrying a Korean, I think we're starting the first Asian Farrand lineage in history.

Correct me if I'm wrong. 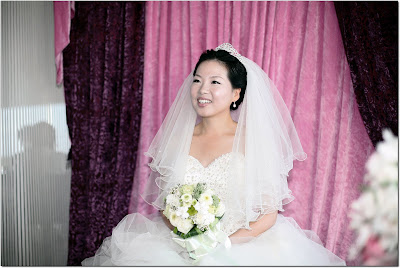 Heather is always pretty photogenic, but on that day in particular she was even more beautiful. 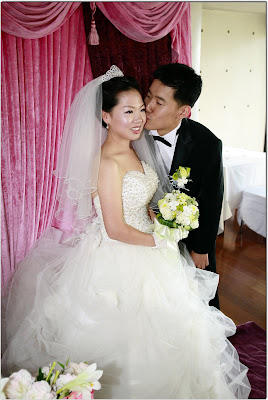 A lucky man and a (fairly) lucky woman. Tee hee.

I've never had any doubts about marrying Heather. 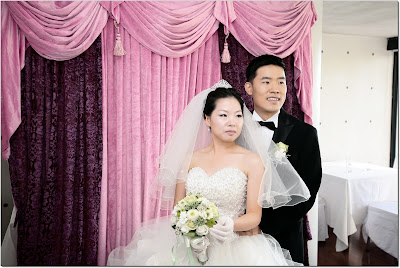 We had photos taken for around 20 minutes, with the photographers placing us in all manner of photogenic positions. Luckily Adonis's photos are of good quality, because the photos from the wedding agency still haven't arrived yet. It might have something to do with the fact that Heather's older sister is still bargaining with them over the price they're charging us. She's good at that sort of thing. 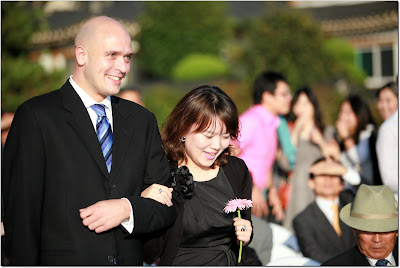 The ceremony started on time, but it still seemed like 'all of a sudden'. We had rehearsed a little, but the whole thing felt pretty surreal at the time. On the sixth floor, music started playing and the wedding procession began. First Mr Kang walked up to the stage, with music from a famous MBC drama playing. Then came my Dad and Heather's mother, followed by four of my friends and four of Heather's friends walking arm in arm. 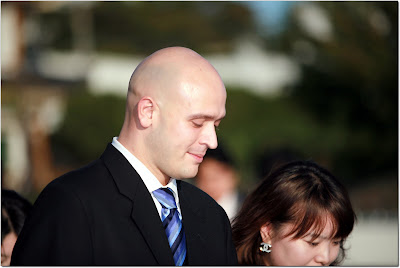 Jef Robison is a very good friend who I came down to Busan with on a near-legendary coach bus back in 2006. He knew Heather and I before we started dating and is the only person left from the original Busanjin group that is still in Busan.
The other friends I had chosen in this part of the procession were Daniel Pak, Anthony Nguyen and John Bernardi. I declined to choose a 'best man' for the ceremony, because there are too many best men here and abroad and it's too hard to choose one. 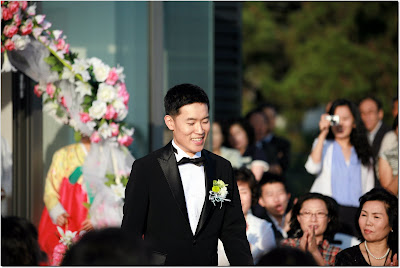 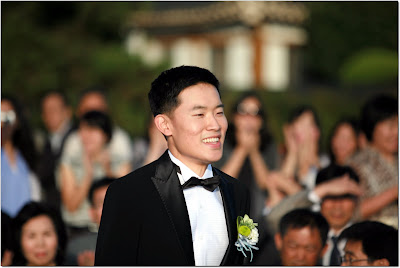 Then I came along, walking to the music of Love at First Sight by Kylie Minogue. I was smiling because I was happy, and also because everyone was clapping. It felt like I had achieved something great, and all I was really doing was marrying the one that I loved. So I was feeling great about something wonderful. 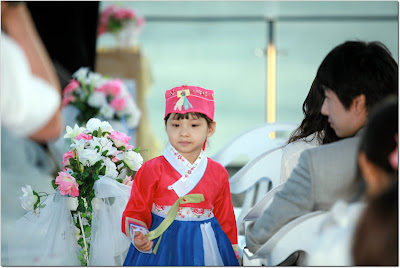 Then came our little flower girl, Ji-Ye. She was pretty bewildered by the whole event and throughout the day was calling my name a few times. When I said 'Yes?' she just looked at me sheepishly and grinned. In her part of the procession, she walked down the aisle and threw flower petals from a basket. She did a good job, and I've never seen her so focused and serious in my life. 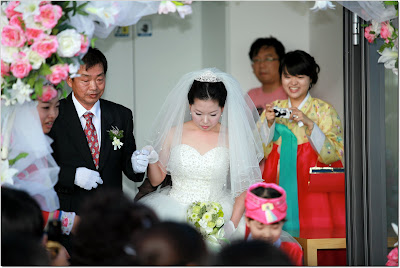 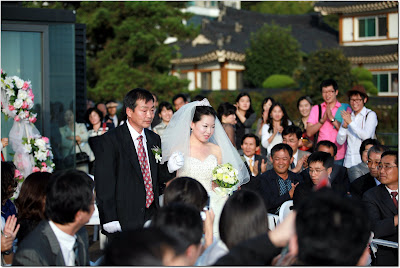 Then came the bride with her father. I'm sure that this moment is one that will stick with us for a long time to come. 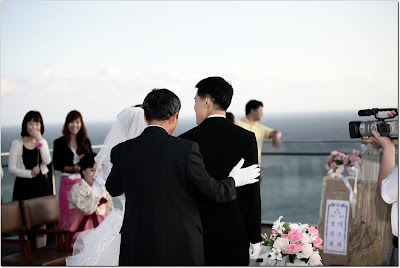 The father of the bride gave me his daughter's hand, and we turned around for the ceremony. 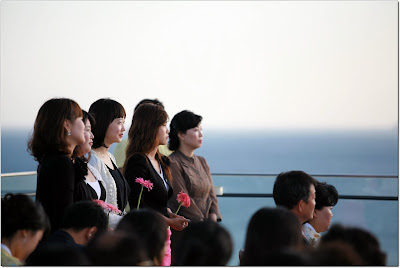 Heather's friends from the procession stood on the left. They were Ellie, Christine, Heidi and Rebecca. 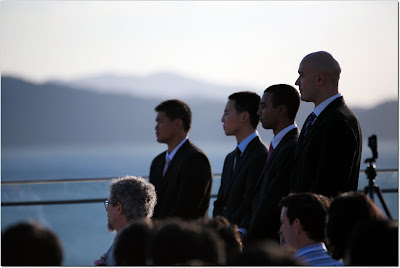 And standing on my side were the trusty Boys of Busan. 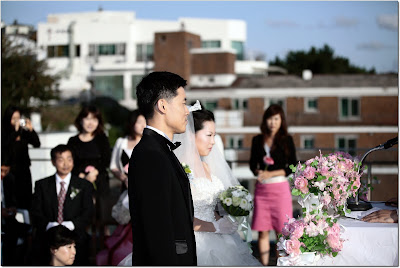 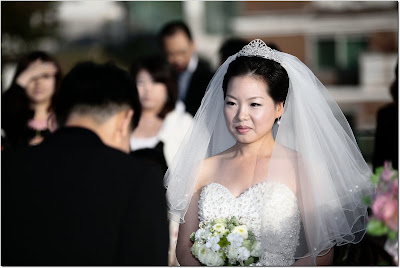 The ceremony itself was around 30 minutes, and consisted of some Korean and Western formalities. Heather and I bowed to each other and affirmed our wedding vows, which were spoken in Korean by Mr Kang, who was our celebrant. 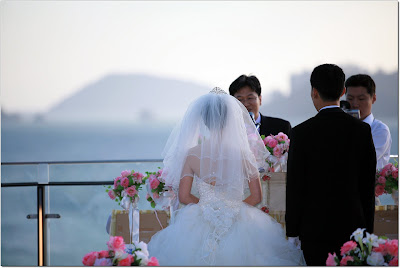 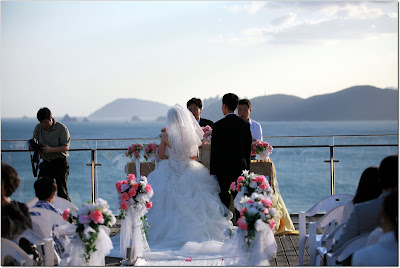 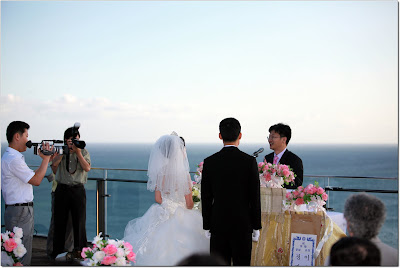 We were extremely lucky with the weather, because it rained just two days later. Mr Kang is our old boss from CDI, and did a great job with the ceremony. All in all, things went very well and we have a lot to be thankful for.

I'll follow up with the rest of the day's events shortly. See you soon!

congratulations lee and heather... we love you guys!

I've been waiting weeks for this post! Keep 'em coming.. my favorite pic is definitely you walking down the aisle. That's the most genuine "Lee smile" ever photographed.

Wow, what a beautiful wedding!

Hey Lee, the wedding seems so beautiful. I am happy for you guys :)

Thanks for the comments everyone!