(After me, the flood) 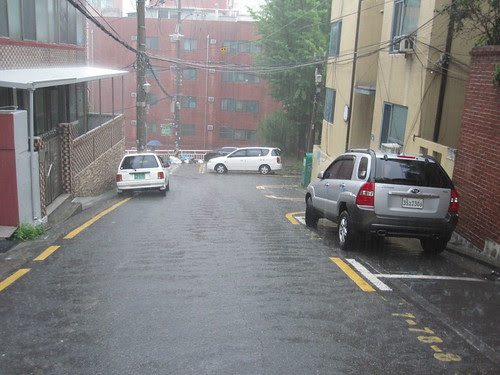 A person to whom I was listening was once talking about time management. The emerging point being that everyone tends to focus on time management, when really they should be thinking about priority management. When you get your priorities clear, time will take care of itself.

That was nice, I thought. 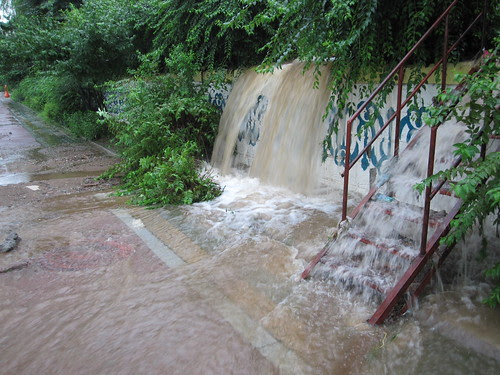 But what to do if one has too many priorities? 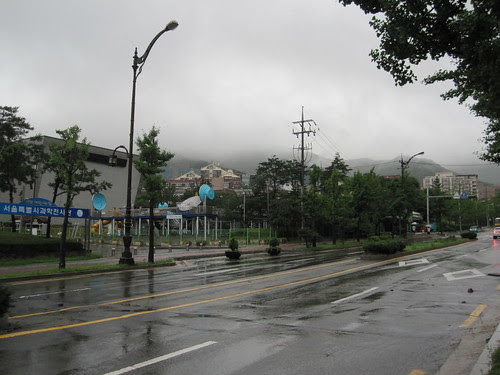 "People say 'I'm taking it one day at a time'. You know what? So is everybody. That's how time works." 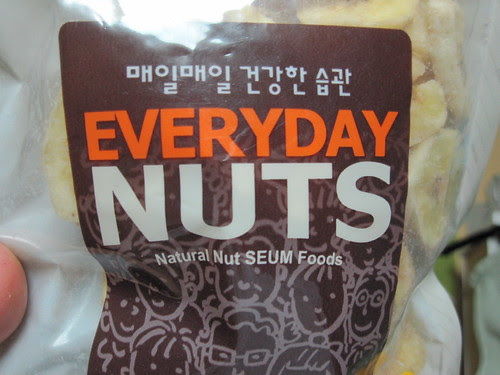 If it weren't for a daily breakfast and a splash of humour when needed, I think I'd go a bit nutty. Not to say that going nuts isn't a good thing, it just makes it more difficult to accomplish tasks that require a degree of focus. 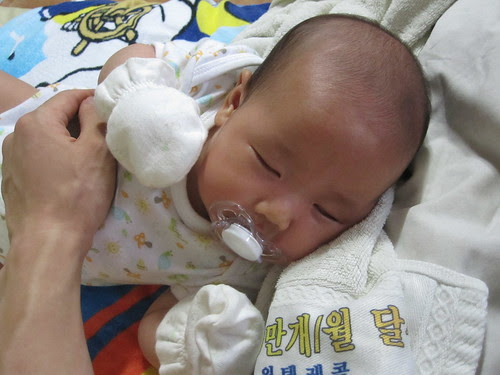 A baby and a parent can be thought of as two celestial objects orbiting each other in space. During pregnancy, the baby is a growing moon in fast orbit, inflicting a noticeably enlargening wobble on the lifestyle of the parent. Only by sheer weight of inertia, can the parent maintain accomplishment of daily tasks like doing the laundry or going shopping.

However, the gravity of the baby eventually increases to such a size that the parent's life stops and then in an unusual cosmic event, begins to revolve around the baby. At 3 months of age, the baby is sufficiently massive that once commonplace tasks like, say, eating or sleeping, often times become an unwinnable battle. 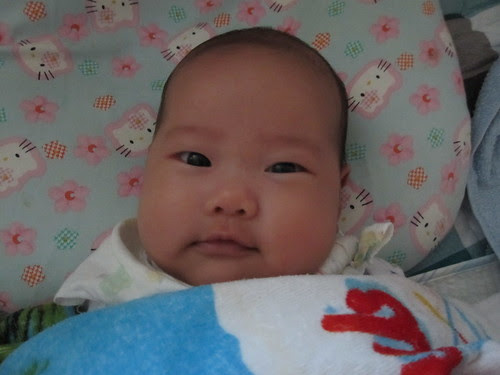 Most days at the Farrand household begin at 3am. At this unholy hour, Big Baengy will often make a sound, which I will call a snickle. It's a kind of snorting sound that she makes when she's about to wake up. 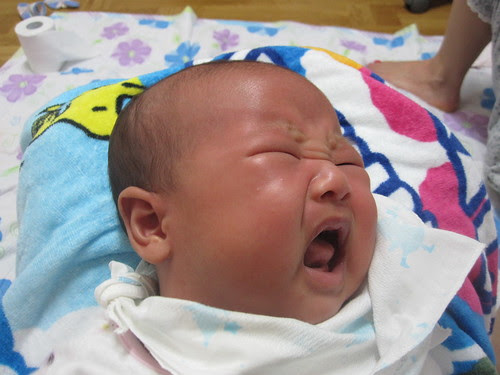 One snickle soon follows another, and ten or so snickles later, Baengy is awake and needing attention. 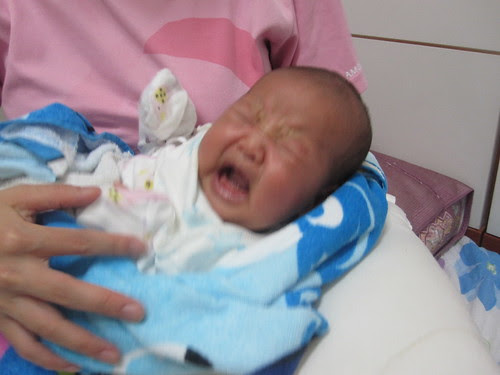 If such attention is not acceptably forthcoming, Baengy activates her personal siren, which can penetrate the deepest of adult dreams like some giant serpentine claw that yanks one from the depths of serenity and into a world of cacophonous din. 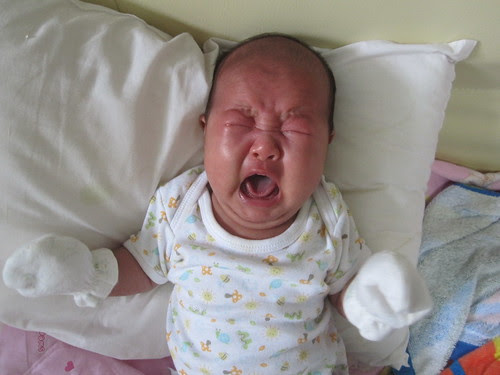 If the laws of physics are being policed by some kind of deity, I would like to promptly bring it to their attention that many of the laws are being broken every night at around 3am.

There would be no other way to explain how a body so small can create a sound so loud, for such an extended period of time. 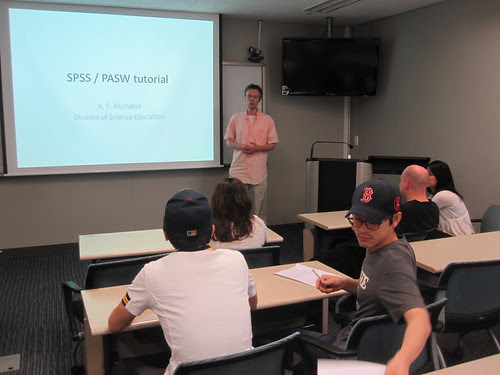 But life hasn't all been about bawling babies. Arthur came over to our department a while ago and gave us a presentation on statistical analysis. One of my hobbies at university is to figure out new ways to educate ourselves. 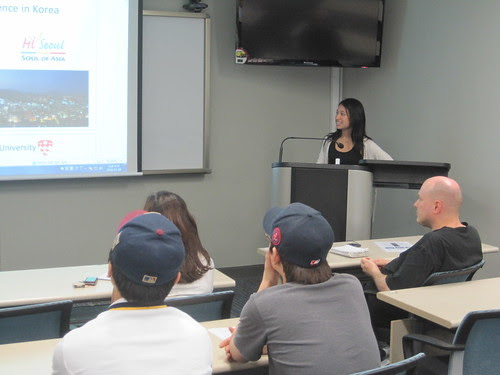 Nisha also gave a summary of life in Korea. Her time here finished and she left for the greener pastures of the London School of Tropical Medicine.

Did you know that malaria comes from the words mal = bad and aria = air?

Baengy tends to emit her fair share of malaria in the mornings, to the tune of a tiny trumpet. 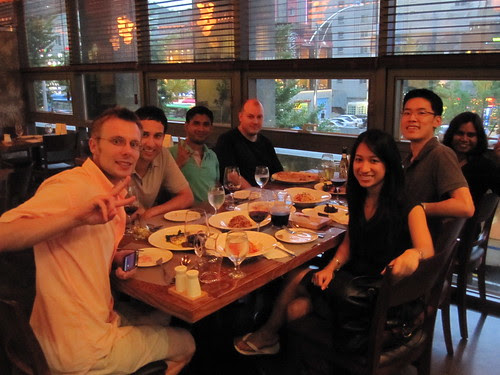 Jina and Franco's Trattoria serves cuisine that tastes even better when paid for by the lab credit card. 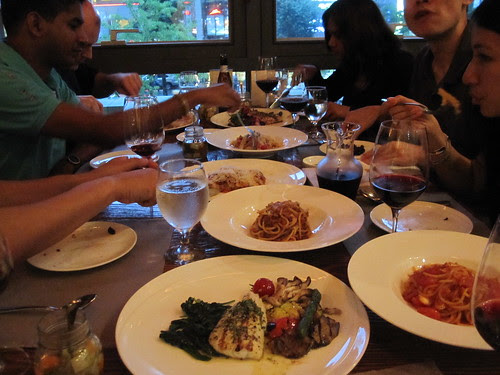 One thing I've noticed in Korea is that there's no medium quality pasta. Sorrentos and Mr Pizza serve synthetic overpriced nonsense not worthy of sale, while places like Trattoria and Tombola dispense immaculately flavoured, but small, lumps of heavenly spaghetti.

In Australia you can get good cheap pasta at quite a few places. But then again, it's difficult to find good cheap kimchi. I guess it all balances out. 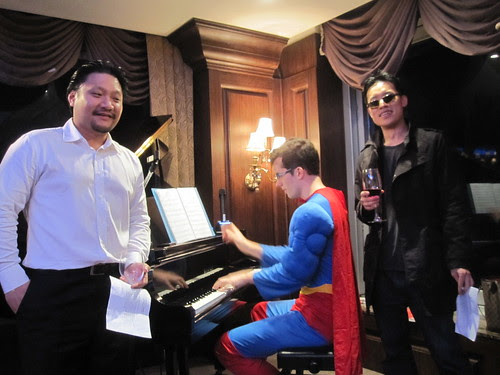 I also had the pleasure of drinking wine while Superman played the piano. This was a Hollywood themed night for the Area 30 Toastmasters clubs. I was supposed to be Neo and/or Morpheus. 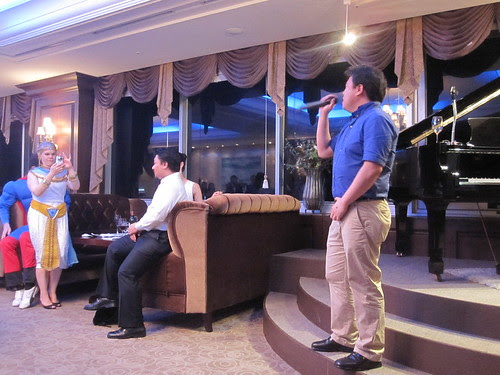 And in the immortal words of Impatient Chicken, we were serenaded by a co-worker again.

Actually, there were a few good performances that night. 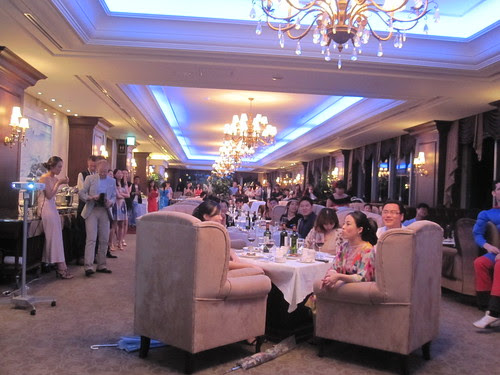 My favourite ongoing wine joke is from Jef Robison. Whenever someone complains about something incessantly, he will quip 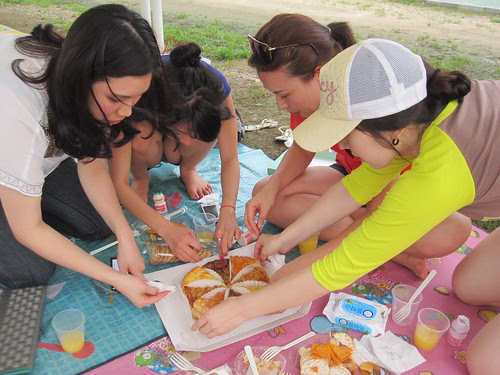 Cassie Sung also took off for greener pastures. For her, those were the hallowed fields of Vancouver. She's studying environmental management, a field to which I wholeheartedly tip my symbolic hat. 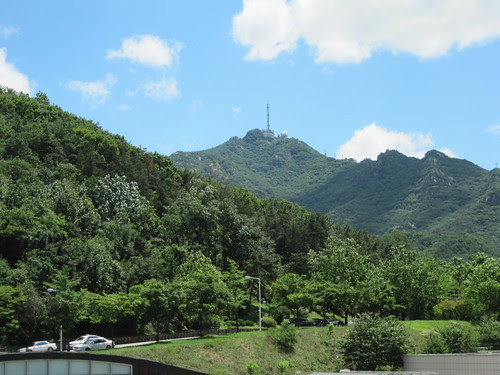 Mount Gwanak towers over my lab like a watchful guardian. I like to think that it feels a certain amount of displeasure whenever I procrastinate. 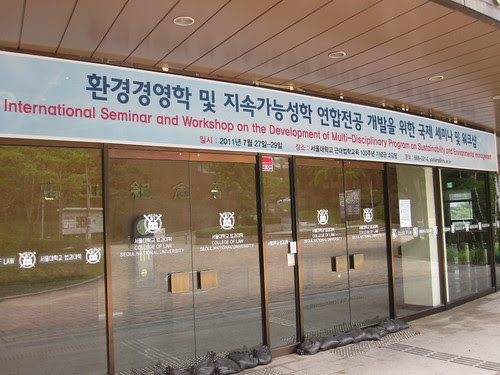 I spotted this humourously long name for a workshop at the law school entitled 'International Seminar and Workshop on the Development of Multi-Disciplinary Program on Sustainability and Environmental Management.'

They felt it wise to leave out the ubiquitous -in the Asia Pacific Region suffix. 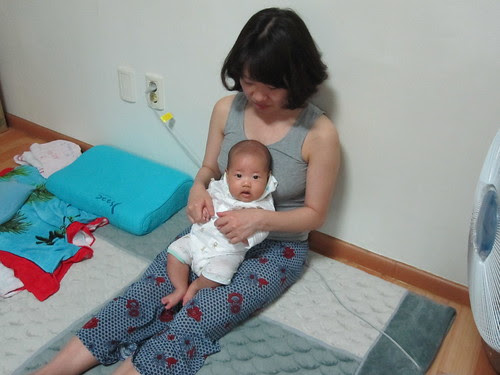 In this photo, you may notice that Baengy has a rather large cranium. I noticed it too. She has evidently concluded that her future hyperintelligence necessitates an expansionist policy in gray matter real estate.

She is also somewhat neckless. To explain this, I've come up with the Neckless Baby Hypothesis. In summary it states that babies have shortened necks to reduce the chance of whiplash, much like how a car-crash neckbrace is designed to immobilise the head. One comical outcome of this is that it's very easy to sneak up on a baby from a peripheral origin.

Then again, the most common outcome of sneaking up on a baby and surprising them is akin to the facial expression of a bug staring at a wall. 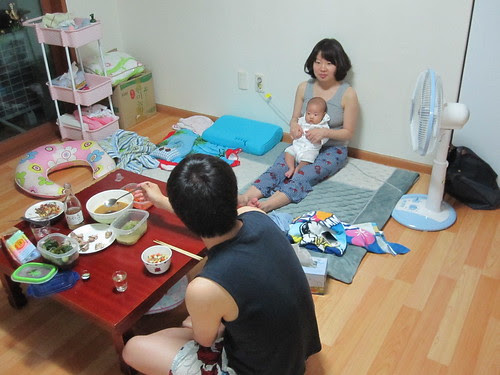 Domestic life is fairly good, especially when Baengy endows our household with one of her non-crying excerpts from the Book of Early Life. 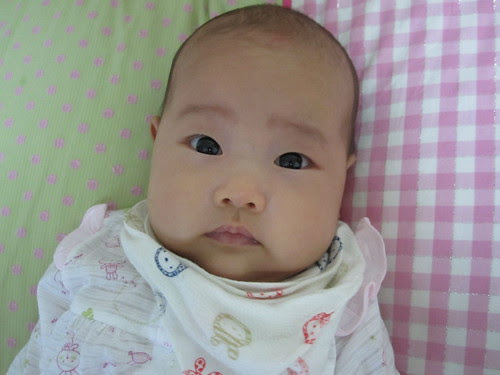 But undeniable cuteness compensates for all inconveniences to that point experienced.

Goo-goo-goo, ga ga. I'm pretty sure that babyspeak is a natural instinct of parents. However, it's different in different countries.

It's worthy of further study by an infantile linguist. 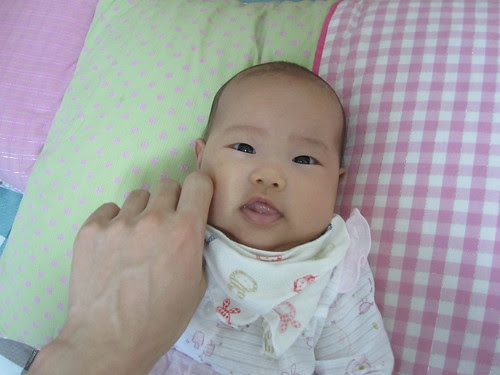 And just as I enjoy a good gorgonzola, Baengy enjoys a good cheek rub.

A cheek rub for the cheeky, that's what it is. 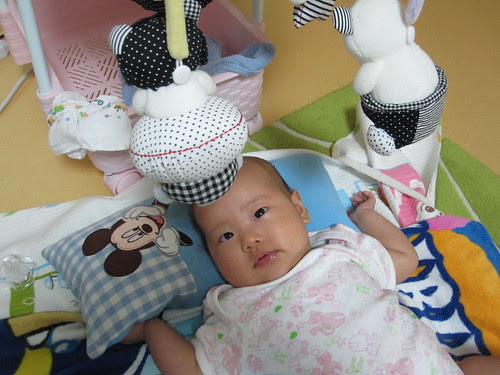 The hanging mobile is a mysterious device with arcane powers.

The witchcraft it weaves, I ponder not. 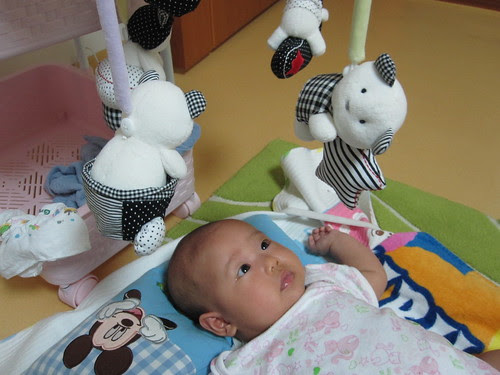 Like some kind of primordial hallucinogen operating as suspended semaphore, it holds Baengy's undivided attention for minutes on end. And yes, minutes on end could just as well be a short eternity, in which a depraved parent is free to prepare a meal or visit the latrines.

The current mobile is black and white, designed to catch the attention of babies up to three months (who are unable to distinguish colours). Each of the toys makes a rattling or squeaking sound when agitated, and one of them plays a battery-operated "It's a Small World After All." Baengy will gaze at each artifact intensely, as if it is somehow communicating to the observer some hidden truth.

Baengy is growing cuter by the day, it seems! Not to worry about the size of the cranium - I'm sure it encloses an enormous brain and she'll soon grow into. Our eldest son had such a huge head (affectionately referred to as 'the melon' by his father and I) he had an awful time learning to hold it up. It didn't seem to help his balance when learning to walk, either....fast forward 18 or so years, and he's grown into the melon and his brain has proved to be an excellent one. You have so much fun to look forward to!