Aye 1 (also ay)
noun.
An affirmative vote or voter.
Ex. The ayes outnumber the nays on this issue.

Let us pause for a moment to marvel at the emerging business strategies of free online dictionaries. 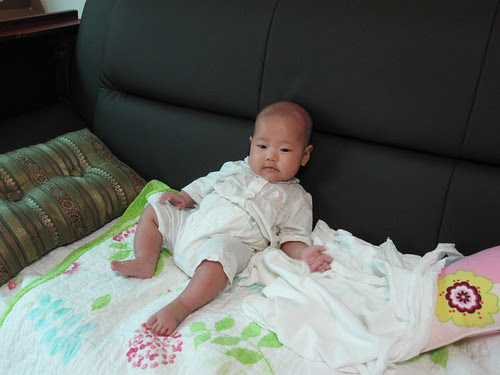 Not long ago, 'Aye' and 'Hey' went down in history as the first identifiable words to emerge from Baengy's mouth. Audibly, they were more like "aaaaya" and "aaheey", but the author of Lee's Korea Blog is not one to deny credit where credit is due. One could endlessly debate the age old enigma "If a word is used unknowingly and completely out of context by an infant with no concept of words, is it still a word?"
To which I would say "Definitely. Please."

After all, if someone mumbles some meaningless nonsense in their bed while dreaming unaware, it's certainly enough to get them arrested by the Thought Police. 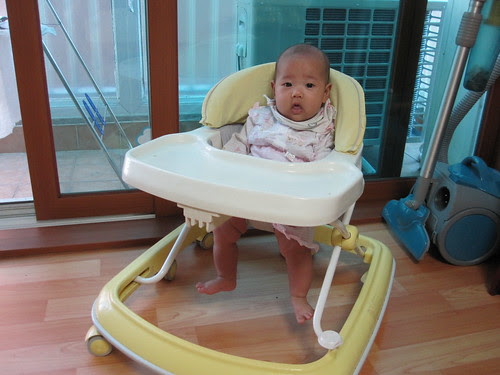 And I like to think that Baengy is actually expressing an early desire to participate in democratic process, while expressing her surprise and/or dismay at the general state of today's political landscape. 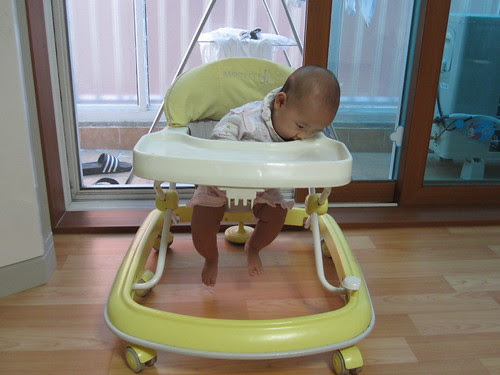 We pseudoinherited this babywalker from Heather's second sister. Pseudoinheritance is when a hand-me-down must eventually be returned to the giver, because the giver is pregnant with another baby on the way.

In the photo above, Baengy is greeting the walker with her customary gesture. For suckling reasons, the mouth is the most developed tactile organ of the human infant. As such, babies often investigate new objects by placing them within the mouth cavity, or for larger objects, by sucking on them. And I've observed that it's not always done in the most elegant way.

More like the early days of Soviet spacedocking, a bit of a hit-and-miss affair. 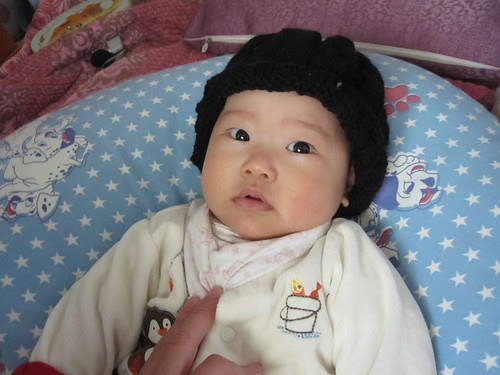 The woollen hat Baengy's wearing in this photo was knitted by Heather's mum. I prefer to call it a Brain Cosy.

Also note the emblem on her jumpsuit. I couldn't help but notice that it seems like the baby version of Amnesty's logo. 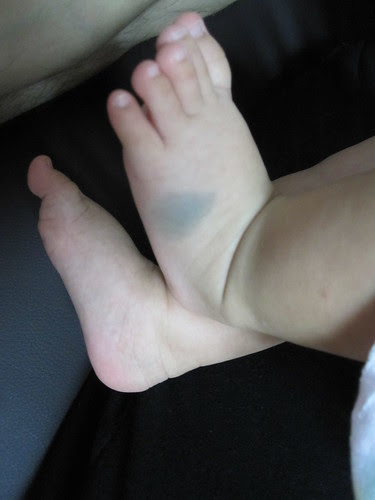 Along with attempting to revive words deserving of more attention, this young blog author also indulges in the forgotten art of frivolous nicknaming.

The blue patch on our daughter's left foot is a birthmark. Somewhat comically, I happen to have a similar one on my right hand. Baengy Bluefoot is my newest nickname currently doing the rounds. Earlier, her common household name was Milkytongue - due to her habit of finishing milk sessions, but somehow neglecting to perform the final swallowing action. This results in her tongue remaining visibly milky. 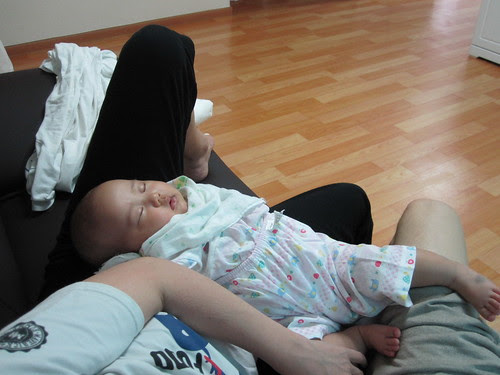 Here's Baengy Bluefoot, passed out on her mother's lap. We've long since learned the folly of waking her too soon, and her entire body is littered with motion sensors. 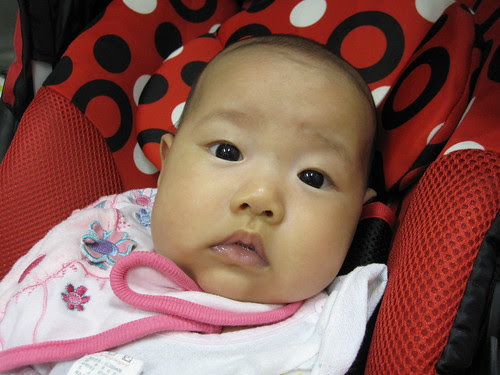 The indentation at the top of her forehead is called a fontanelle. It's a membranous part of a baby's skull that allows the bony plates to flex during birth. It also pulses with her heartbeat. Eventually it closes up and becomes bone (ossification), which coincidentally renders her entire brain impenetrable to ultrasound imaging. In other words, her skull becomes an acoustic fortress... which I'm only saying because it's fun to say. 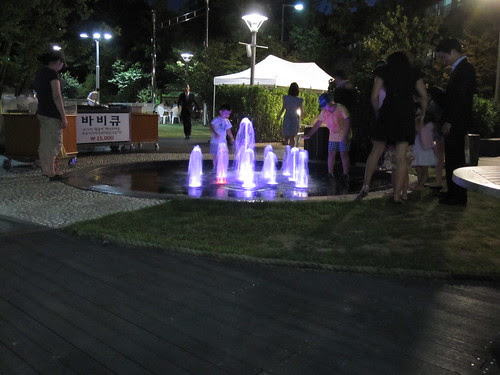 Fontanelle means fountain in French. These ones near the Hoam Faculty house caught Baengy's eye for a good five minutes. One could imagine that sparkly, stimulating objects would hold her attention the longest. But that isn't always the case. I've observed her to be fixated longest on the most unlikely objects, namely bits of discarded fruit peelings and the wrinkles on my forehead. 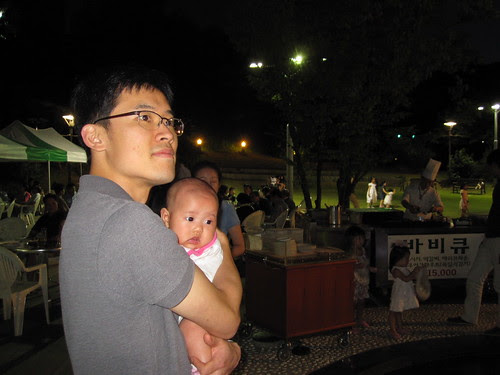 Baengy likes looking at things, and I like showing things to others. That's why I have this blog. We're a good match. I try to narrate my showing sessions to Baengy in an NPR-documentary style.

"And this is a device for aiding sausage consumption, colloquially referred to as a barbecue plate..." 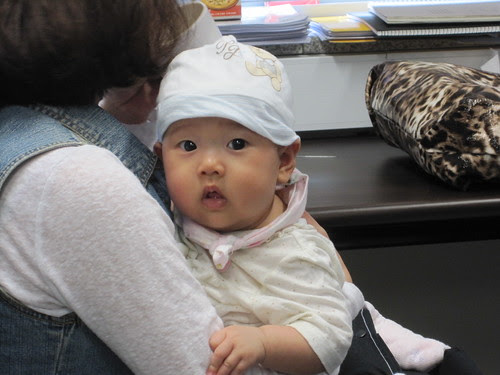 I often have to work on the weekends, and sometimes wife and baby come along for a visit. To my knowledge, Baengy has successfully stared at every piece of furniture. 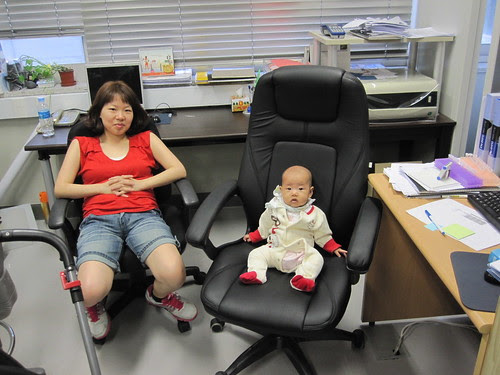 They'll often wait around and watch me like this until I'm finished. Here's the new chairman of the board, sitting in my spot. The politically correct term would be chairperson, or a word I have recently coined myself:

Chairbaby
noun.
A baby who presides over meetings and ensures business is conducted in an orderly fashion.
Ex. "This meeting's chairbaby is none other than the amazing Ashley Farrand, with a full one hundred days of life experience. The meeting shall begin when she says the word 'Aye'." 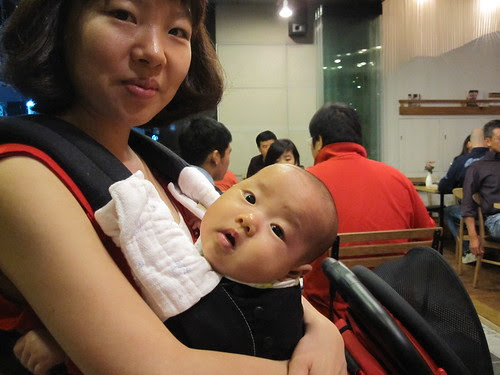 When not chairing meetings of dubious outcome, Baengy can often be found slung to her mother in prominent Seoul locations. Wikipedia just told me that in this particular situation, we can say that the mother is wearing her daughter. How interesting.

She's like a little hot water bottle during these cooler autumn nights. 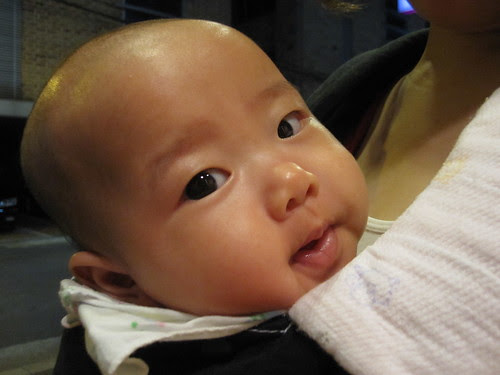 Baengy is a fine little baby, and Heather is a fine mother. I do what I can to clean poopies and make funny faces, but Heather is the real star. Credit where credit is due. I've recently decided to strive to be a more helpful nuisance around the house.

And so, Hey cockalorum! I guess that's the end of this blog post.

*For those wondering what cockalorum means, it's a noun. A little man with an unduly high opinion of himself

I had a comment typed out, and then I erased it, apparently. Typical.

Anyway, what I said was, one day I will stop with always commenting that your daughter is so cute, but today is not that day. She is SO cute.

I love the age she's at in these pictures. This is the time when babies begin the stage of being what my sister and I call "monkey babies." You know, when they like to be held and to hang on to you like a baby monkey does to its mom and, like baby monkeys, they are alert to and paying very much attention to what's going on around them. Super cute.

Yes indeed. A good thing too - the ones that didn't hang on were the ones who fell out of the trees.