Life with a baby is a journey of discovery. It's mostly uphill, but every once in a while the view gets a little better. Childhood development is truly rewarding to observe, but a baby wailing at 3am can be merciless in every sense of the word. There is no resistance possible to such incessant crying, only unconditional surrender.

Forty minutes after a parent is pounded into complete submission through an unstoppable bout of endless crying, the baby often stops spontaneously (sometimes with a cheeky grin), leaving the parent in a confused state of mental disarray. And then as if plunged into a cloud of ether, the parent hits the pillow in narcotic slumber, before the next scheduled barrage three hours later. 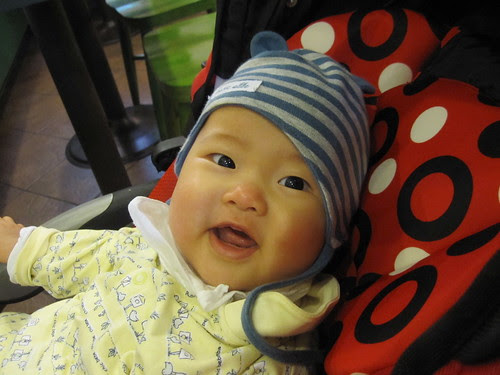 The three major challenges for parents are sleepless nights, an extended state of vigilance needed throughout the day and diverse encounters with Baby Poop™. 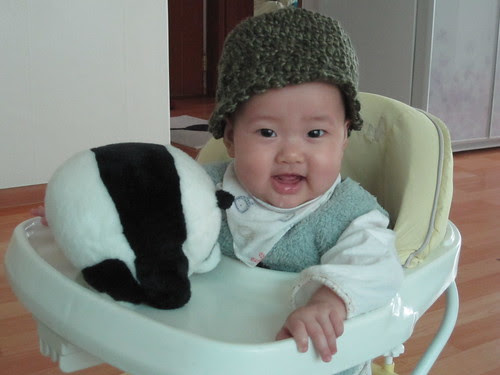 Of these three challenges, a fascination with the gastrointestinal process often lands me in a dazed fixation on the topic of poop. Though I find baby droppings to be not entirely repulsive, I'll keep such photos off this blog, lest Baengy rediscover them many years in the distant future.

Basically, it's a mushy yellow substance dispensed in unpredictable bursts with an aroma that can best be described as humanised natural yoghurt. 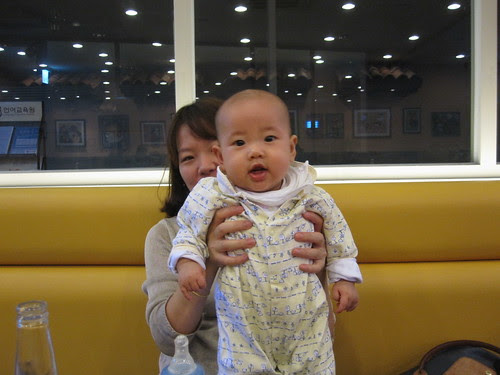 To manage appropriate household responses, I've devised the Farrand Level Alert for Poop (or FLAP, for short). It's a code to quickly categorise the magnitude of a detected nappy event, with severity scale as follows: 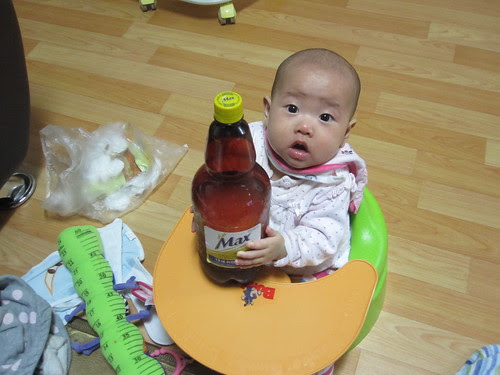 Fortunately, we at the Farrand household have only been subjected to a Monumental Poop on two historical occasions. Both events were preceded by excess milk consumption, had tummy rumblings as an immediate forewarning and were followed with aftershocks of flatulence. 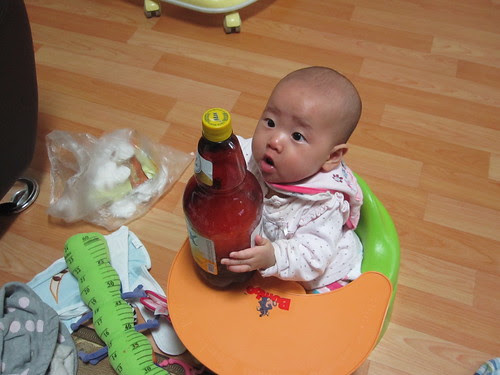 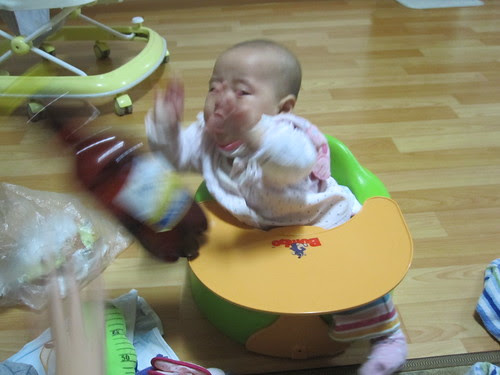 While Baengy will occasionally take interest in other household fluids, such as beer, her ingrained lactophilia means inevitable rejection from her Bumbo table.

Very rarely will anything remain on her Bumbo table for long, before being thrown on the floor. 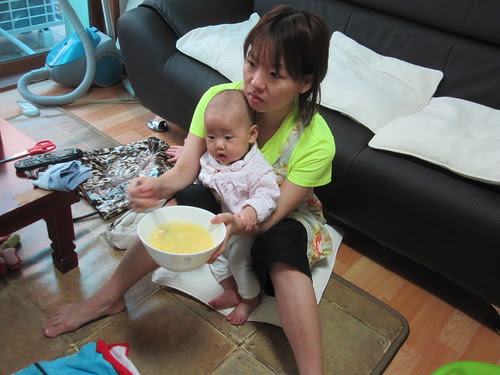 Her interest can be aroused by stirring, as we've found when mum scrambles eggs. 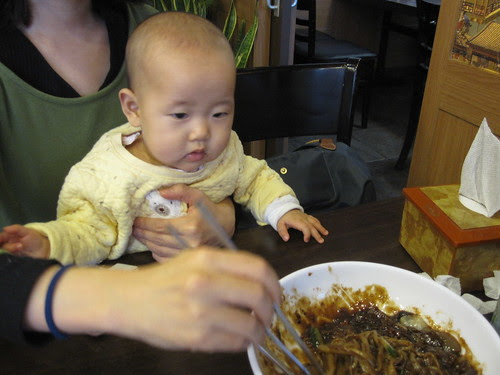 And also when mum stirs jjajjangmyeon.

Babies have excellent intuition when it comes to knowing what is important to adults. Trying to entertain a baby with jingling keys will rarely last 30 seconds, whereas clipping your own fingernails will evoke intense fascination and a futile attempt to grab the clippers. 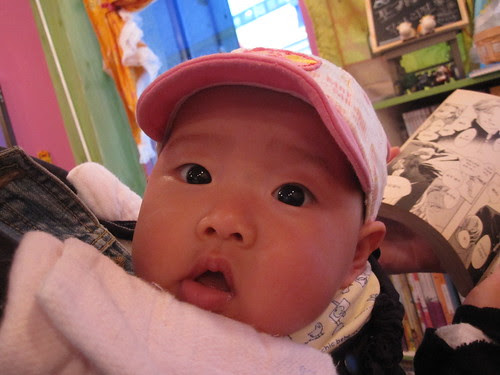 Similarly, a plethora of colourful toys on the ground will not nearly be as fascinating as two bowls of hot soup on a table. And no matter how many times her inquisitive paw from below is swatted away, it just comes creeping back.

In a failed attempt at reverse psychology, I have indeed pretended to clip my nails with keys, and engaged in mock dining of colourful toys on a table. But babies are wily creatures.

They'll just give you a stare that says "What on Earth are you doing?" 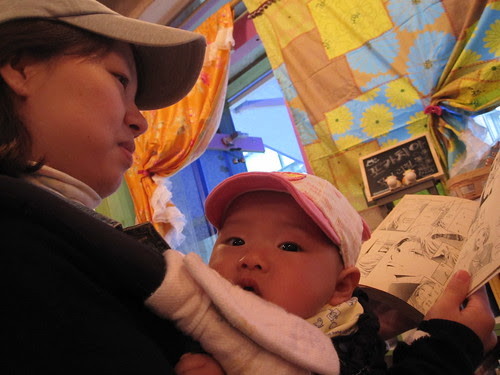 One thing that rings true for both first-aid training sessions and babies, is that dummies and slings can work wonders. 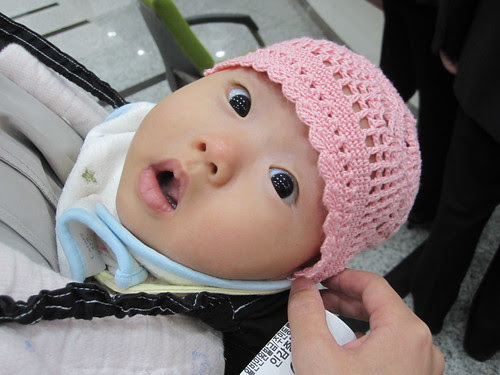 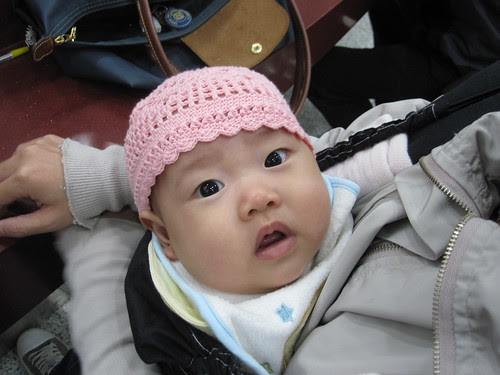 I don't know if a thousand-yard-stare is a sign of enjoyment, but Baengy sure is quiet when slung.

It also magnifies her comedic appearance when wearing hats. 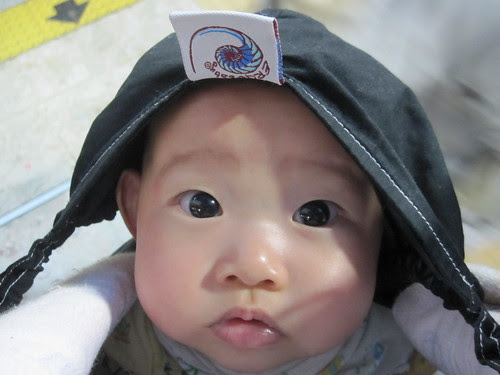 This is a ParentCam shot, taken from a natural perspective when slinging. Baengy will often stare at me like this, for minutes on end.

I have no idea what she's looking at, and I've found that staring back just prolongs the engagement. 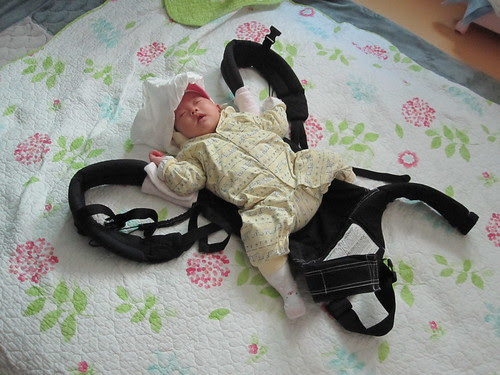 And walking around in a sling will magically put her to sleep in around 5 minutes flat. Maybe it's the warmth of the human body, or the close sound of a heartbeat. The result is always the same. 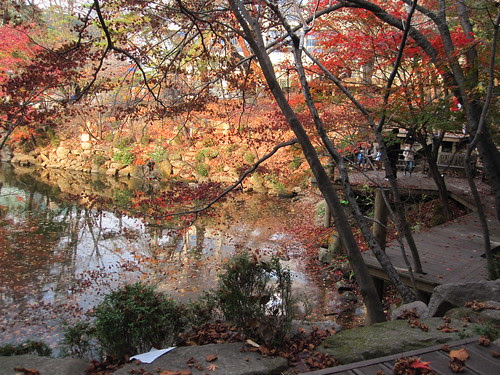 Autumn passed some time ago, taking with it the maple colours around Jahayeon, the campus pond. 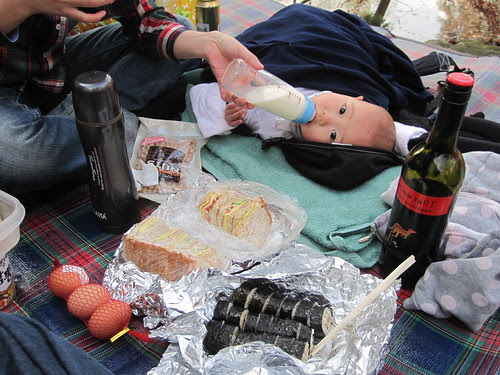 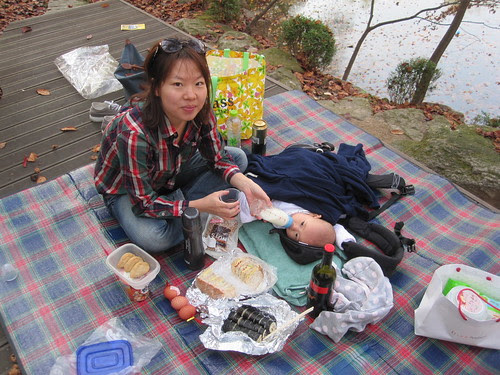 We managed to squeeze in a picnic with homemade kimbap and boiled eggs. When I was young, I always wondered why parents liked tupperware so much. Now I know. 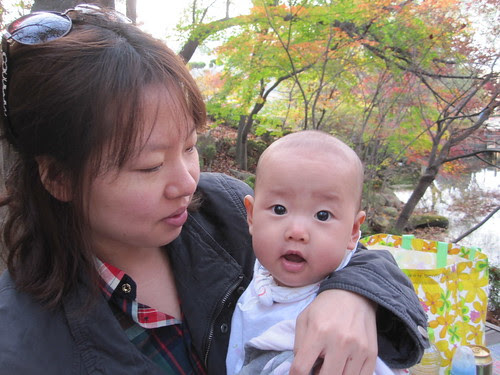 As a person who likes pointing out firsts, having a baby is a great thing. Baengy's first picnic was met with approval, but she was completely fixated on us and not the nice surroundings.

Next time we could just have a picnic in the living room. 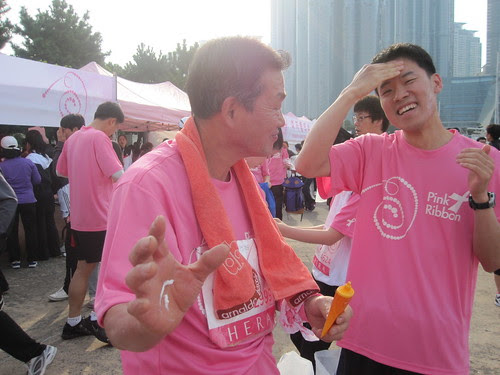 Those who agree to babysit for the Farrands receive an automatic Order of Merit. Heather's mother has done it on more than one occasion, resulting in her status rising to Hero of the Farrand Family.

But in a puzzling turn of events, sometimes when babysitting has been organised, we squander the precious time by running in charity marathons. 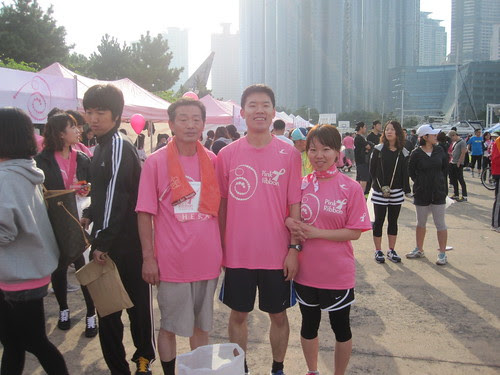 Heather's father may have something to do with that. Just like my old man, Heather's old man likes to run around. 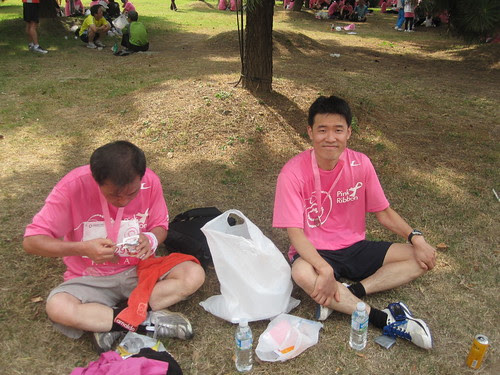 But we did our ten kilometres in rather nice weather and felt pretty good about it. Father-in-law's time was one hour and six minutes, which is great for a man of his age. 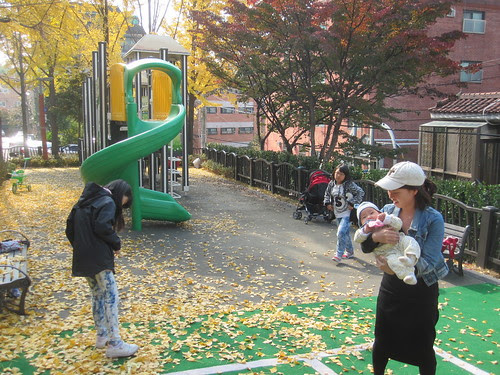 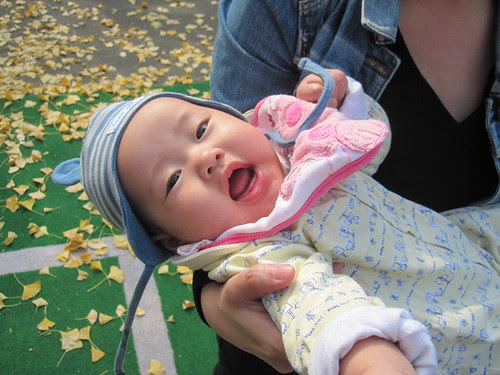 There's a little playground near our house that Baengy isn't quite tall enough to romp around in. So we just carry Baengy from place to place and she seems to enjoy it enough. These days she's eating a lot and growing fast.

Our developing morning ritual is to exclaim how much she grew overnight. 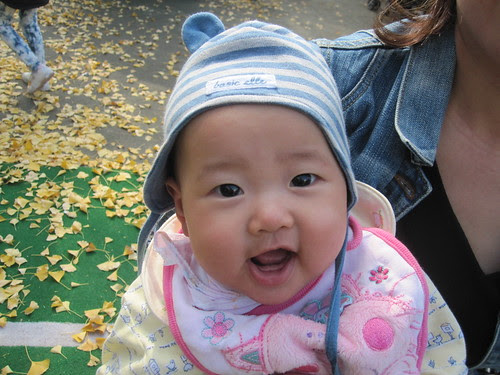 Our day at the park ended in tiny smiles, those frequent yet immeasurable rewards for tireless parenting. We're looking forward to a lot more of them over the months to come.

The Farrand Family Korea hopes you had a merry Givmas/Festivus/Christmas, and wishes you an exciting new year.

Funny, funny, funny. Let me return the wish, Lee, that you and your family have a wonderful, prosperous,and and successful New Year, and just for fun, be happy.

Happy New Year, if its not too late :P

I love these images, what camera did you use?