One heartwarming general rule of thumb is that most kids will someday grow old enough to look after themselves. In the meantime, sleepless nights endured and food throwing events inflicted ensure that all parents pay the price for daring to persevere. But cutting through the relentless barrages of baby bombardment exists an arcane instinct continuing to power the minimal energy requirements needed for a civilised amount of patience.

Hence the continuation of the human race. 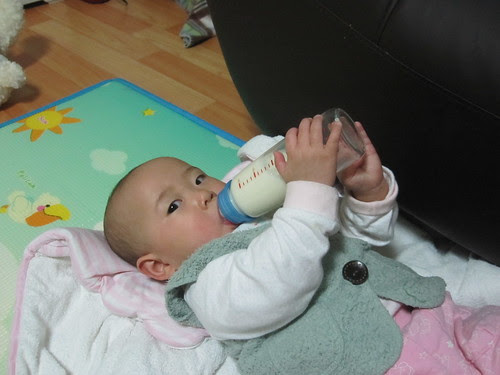 Every once in a while, Baengy learns a new trick. Some are taught, while others seem to materialise from thin air overnight. Not more than a few moons ago, we discovered her feeding herself.

We watched, astounded. While she just gave us a look that said "Yes?" 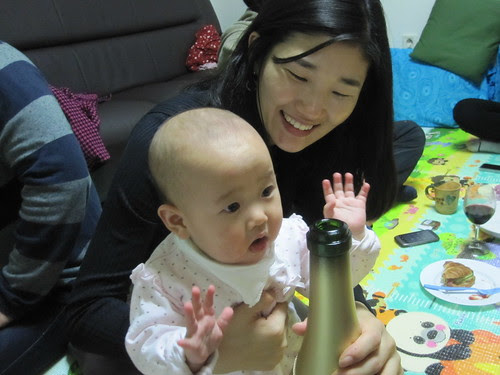 The intellectual development of human babies is driven by endless short-lived curiousity in all things forbidden. Then again, I guess it's easy to see why a champagne bottle might be more enticing than her regular barley water. Holding Baengy in this photo is Jinkang, who is also expecting.

The word expecting is rather nice. Although if indeed the Korean Farrands find it pertinent to produce further offspring, we will dispense with the word 'expecting' and instead focus on 'physically and mentally preparing'. 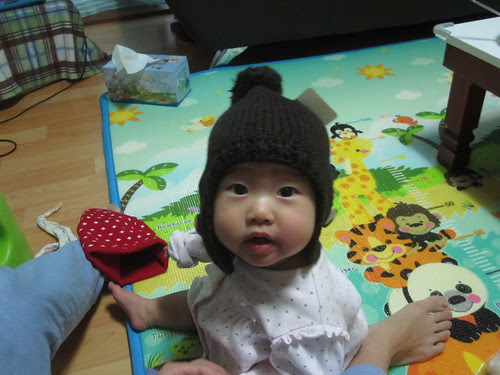 But babies do have their rewards. Mostly it's to do with wearing hats. 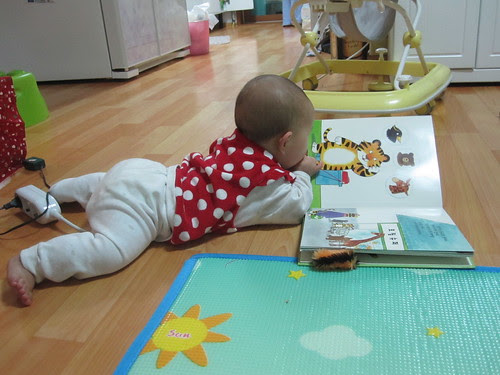 Synopsis: An anthropomorphised child tiger extends warm invitations to his compatriots Eudyptes chrysocome (penguin), Ursus arctos (bear) and Giraffa camelopardalis (giraffe) to eat pizza. Much to their dismay, household ingredients are insufficient. Together with mother tiger, the four animals (who would normally not be in such friendly association in the wild) go shopping for ingredients. Due to differences in opinion as to what deliciousness entails, they choose strawberries, fish and the inexplicable Korean guk-soo (noodle soup) as ingredients. The story ends with mother tiger executing a culinary improbability by producing a pizza that all animals enjoy.

When I read it to Baengy, I enjoy pointing out the inaccuracies. 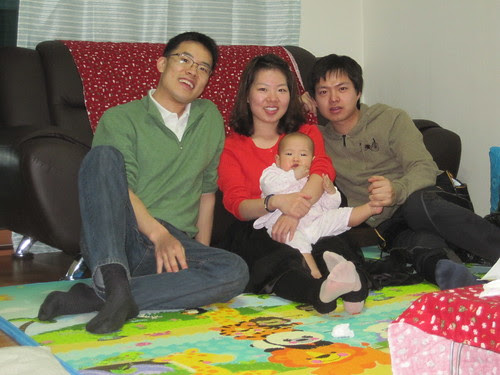 Earlier this year, we were offered accommodation in the Seoul National University family apartments. It's much cheaper and closer to the lab, but not quite as nice as our old place and not big enough for three adults. We had to part ways with Jang-Ho, Heather's brother, with whom we had been living. He now has a new place not far from us, and word on the street is that he has a new girlfriend.

The tabloids are going nuts. 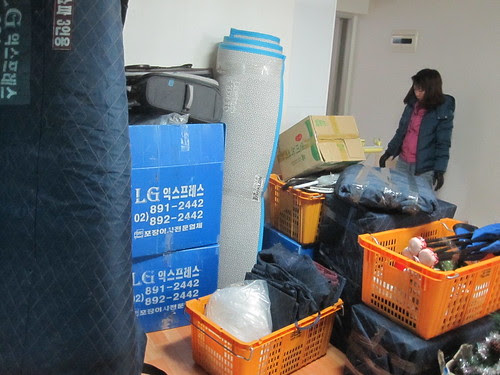 For every itch that arises in Korea, there are numerous companies who specialise in scratching. Most can be found online, and these days for companies like removalists there's a peculiar reverse-auction method available. As a customer, you can post online what your needs are (expected moving date, address, amount of furniture etc), and different companies will ring you and offer their lowest bid. A few removalist company reps visited us in the days before the big move. One of them was a 60 year old guy who told us that he had been moving furniture in our area for over 30 years.

Then along came a younger representative from a different company who told us that he moves furniture faster and cheaper than the old guy we had just met. 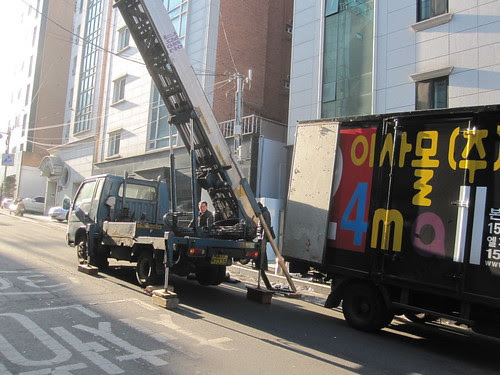 In the end, the company we chose sent three men and a lady to our house. The price was W700,000, but we didn't have to pack up anything. All the clothes were still in our wardrobes, blankets on the beds and utensils in the kitchen cupboards. You can pay a cheaper price and do all the packing yourself, but we wanted to take it easy. Two of the men set to work piling our stuff into large blue boxes, while the lady went to our kitchen and started recording how everything was stored.

I think the third guy's job was to stand outside, smoke cigarettes and make sure nothing went wrong. 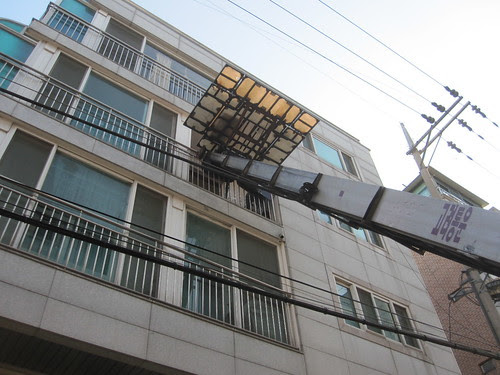 Because most Koreans live in apartments and because most apartments have small doors, nearly all furniture extraction on the peninsula occurs by means of skycrane. 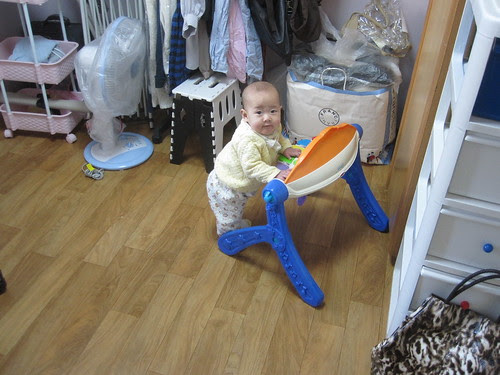 The move went fairly smoothly, with the removalists even making our beds and hanging our pictures on the walls. They had drawn plans of where everything was stored in our old place and unpacked it all as accurately as they could.

Meanwhile, Baengy played some tunes on her baby piano to help us settle in. 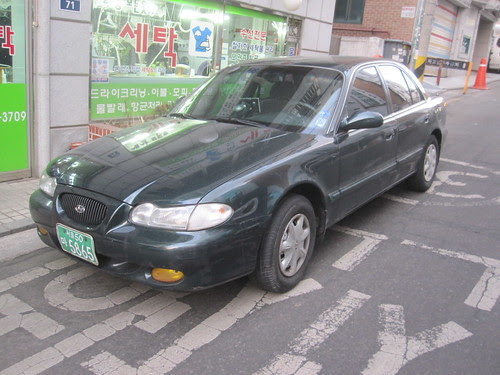 Our friends from Adelaide, Damien and Susan, left for Australia around the same time we moved house. Whenever longtime expats head home, it's a great opportunity for a virtual garage sale. We picked up quite a few things, including their car, which runs on pure enthusiasm rather than gasoline.

We've named her Sunny the Sonata. 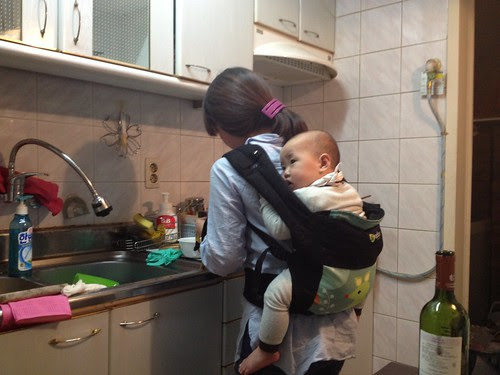 Prior to moving, we were a bit concerned about how our little offspring would fit into a change of abode. Babies will cry when they're bored and cry when they're overstimulated. Baengy just spent the night sitting quietly and staring at the new surroundings. 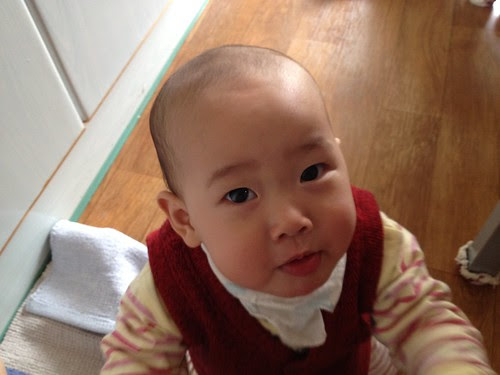 But early in the morning, she was up and happily chewing on her favourite gangnaengy rice puffs like nothing had happened. She's either a very flexible character, or somewhat forgetful. We like to think it's the former.

For those moving house in Korea, we recommend saving yourself the hassle of packing and unpacking. Pay a little more and all you have to do is stand around and watch. You can find the removalist auction services by searching on Naver for the term 이사경매.

Email ThisBlogThis!Share to TwitterShare to FacebookShare to Pinterest
Labels: Moving house in Korea

Hey lee, great blog. I am taking a year at SNU starting this august, so I ended up searching for blogs on life at SNU. I found your blog very amusing to read and ended up reading all of it(it takes a long time) as procrastination during the exam period. Your language is fun to read, and your look on life in Korea was interesting for a guys who is planning to live there for a year.

Anyways, thanks for a great blog, and I will continue to follow it.

Thanks for the nice comment Hans. I'm sure you'll have an enjoyable stay at SNU.

Hey, I happened upon your blog during my exams last semester and found it to be a most effective procrastination tool (thanks!), got hooked and read from start to finish but haven't gotten around to writing a comment until now ... so, congratulations on your marriage and on the birth of your daughter, sorry about your initial PhD not working out, but congratulations on finding a new area of study and thanks for the interesting reading. Just a sort of random question, how hard is it to live in Korea if you are a vegetarian? When I visited last year I found it pretty difficult to find food that didn't have sneaky meat of seafood added in. Thanks very much! :D

Thanks for the comments too, bdoy.
It's very difficult to be a vegetarian in Korea. I was actually a vegan prior to coming here the first time. But I gave up. I intend to save the world via different methods in future.

Hey :) Just wanted to leave a note saying I'm always super excited whenever I see you've posted a new blog. You seem like a really genuine, bright, funny person. And Baengy is really really cute, which is not something I often think about babies! I imagine her looking back and reading your blog in a decade or two and appreciating how much her 엄마 and 아빠 loved her. :D Anyway hope y'all are settling into your new place well. :)

Thanks for the nice comments folks! I look forward to continuing this blog for the next few decades ^^

Well, you're coming up in the world, I see. Congratulations on your new digs and your entertaining blog. Best wishes, as always.

Hi! I chanced upon your blog as I'm keen on learning Korean culture. :) It's interesting how people move into houses there! I've never seen "moving in" cranes in the Philippines. And your baby is cute! Looking forward to more posts! :)

I'm moving next week and just spent last week trying to find a moving company. Fortunately my friends recommended an ajossi that at least four of them have used, and he quoted me at a price way less than what I found online^^ He was also really nice about me not speaking great Korean - haha!

Unfortunately I'm packing up my stuff to save on costs - the upside is that it's giving me a chance to toss all of the stuff that I've managed to accumulate by myself and through the, er, generosity of everyone who has stayed with me.

Appreciate your advice and hope that you're doing well!