“All children, except one, grow up. They soon know that they will grow up, and the way Wendy knew was this. One day when she was two years old she was playing in a garden, and she plucked another flower and ran with it to her mother. I suppose she must have looked rather delightful, for Mrs Darling put her hand to her heart and cried, ‘Oh, why can’t you remain like this for ever!’ This was all that passed between them on the subject, but henceforth Wendy knew that she must grow up. You always know after you are two. Two is the beginning of the end.” 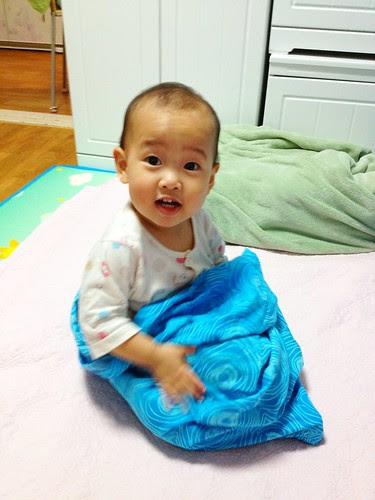 Watching children play is one of the most enjoyable pastimes in the world. It reminds us that there are many fun things in life that we adults have long since forgotten about. 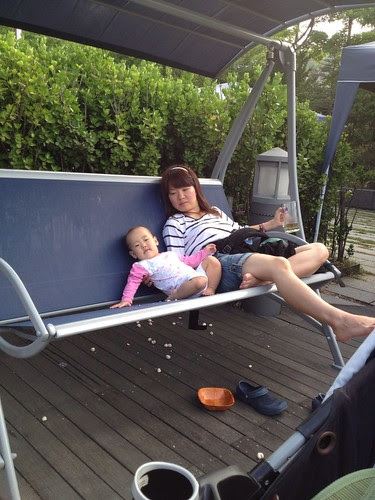 As the leaves fall from the trees, autumn in Seoul begins its departure. We, the Farrand Family of Korea, like to spend the waning days of extended twilight within the confines of Hoam Faculty House, a residential cafe on campus.

An afternoon on a swinging family chair signifies a Sunday well spent. 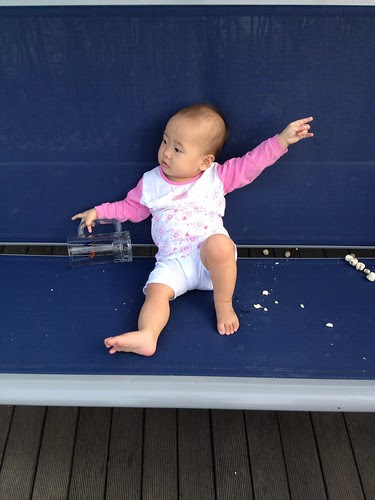 Baengy has reached the point where she can understand what it means to chill out. Prior to this, her being quiet and motionless while awake was usually just a case of her resting or obliviously waiting for something unknown.

Chilling is generally enjoyed by adults, and one's ability to chill vastly improves one's standing amongst them. 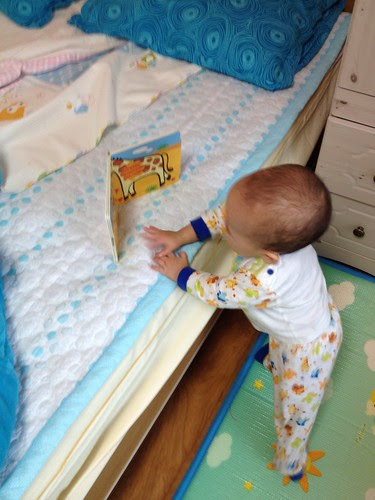 "Children are made readers on the laps of their parents."
- Emilie Buchwald

Mrs Farrand is the biggest contributor of reading time to our budding bookworm. I do what I can, but am unable to match her range and skill in voice acting. All my animal voices, be it an elephant, pig, alligator or giraffe, all sound curiously similar.

How does one distinguish between different reading voices for an elephant and a hippopotamus? 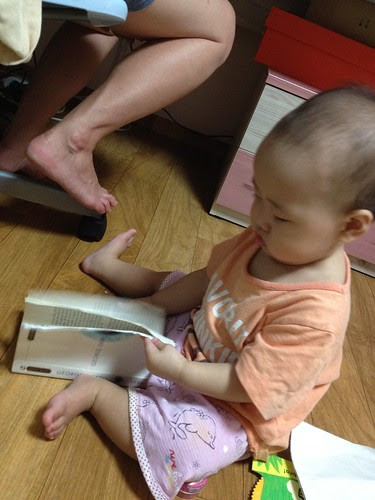 Even when reading time is over, Baengy will pick up books and read them to herself. She'll turn the pages one by one and add careful narrative baby chatter to each, even if the book is upside down. 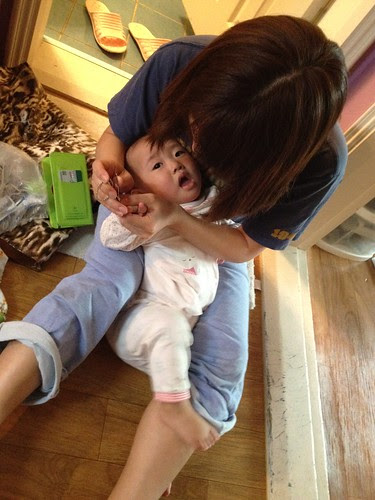 Although we humans stopped digging for edible roots with our bare hands some time ago, evolution has yet to slow down our fingernail growth accordingly. And it recently became apparent to us that our daughter doesn't appreciate having hers clipped. Perhaps she's saving them for a digging expedition.

What we need is an evolutionary process we can communicate more effectively with. 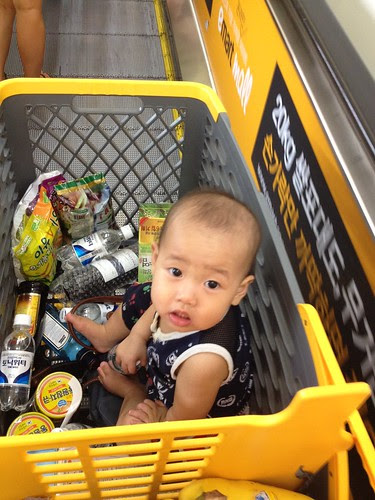 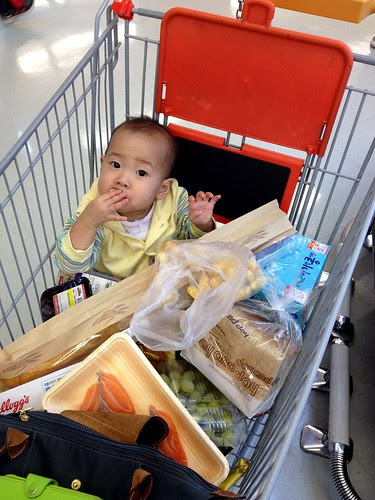 Shopping these days has become a more colourful affair with the inclusion of our very own embedded Quality Control Officer. Baengy will poke, squeeze and occasionally taste-test any goods that are placed within her area of jurisdiction.

Items that are not to her liking are frequently tossed overboard. 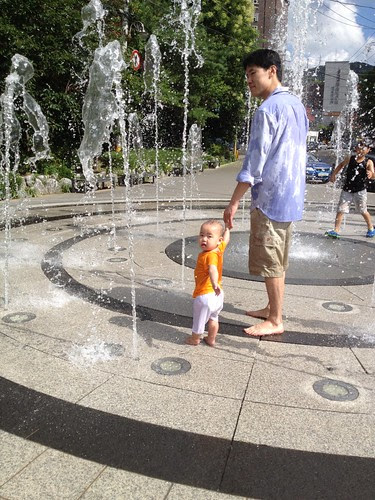 “The afternoon knows what the morning never suspected.”
- Robert Frost 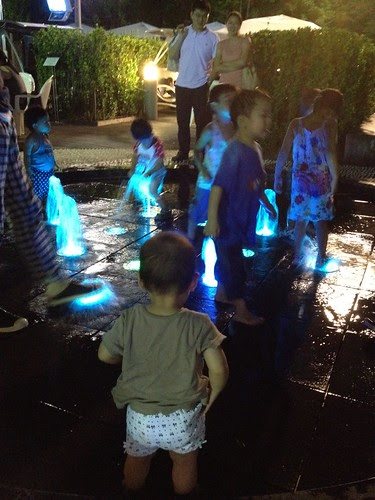 After months of observation, we've concluded that Baengy loves fountains like a fat kid loves cake. Perhaps it's the allure of dynamic motion or the temperature shock associated with the cold rush of water on a hot day.

I like to think it has something to do with her future career in the broad field of nanobiological microfluidics engineering. 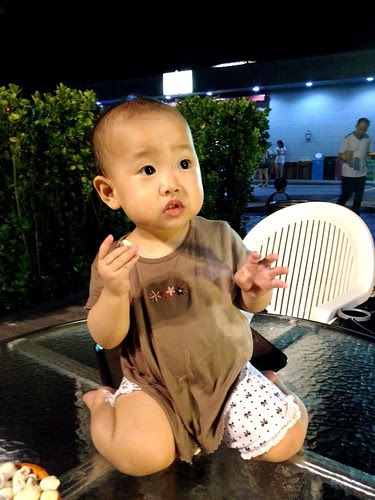 When the nights are warm and she's finished her fountain play, she'll happily sit on our table and munch on her favorite gangnaengy snacks.

Drenched in the fountain of youth. 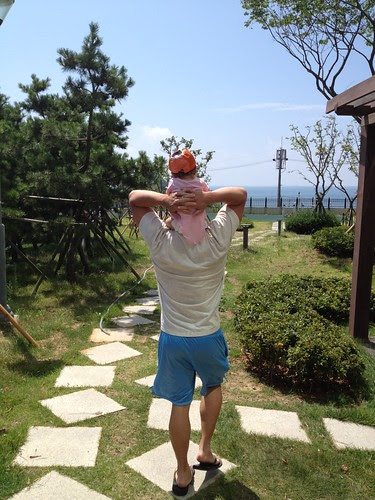 Anthony Nguyen remains a staunch friend leading a parallel life of parenthood in Busan, with his wife and baby daughter. A few years ago we'd be egging each other on to drink yet another bottle of soju at the barbecue table. These days we hold lengthy discussions on the wonders of baby development.

“We may not be able to prepare the future for our children, but we can at least prepare our children for the future.”
- Franklin D. Roosevelt 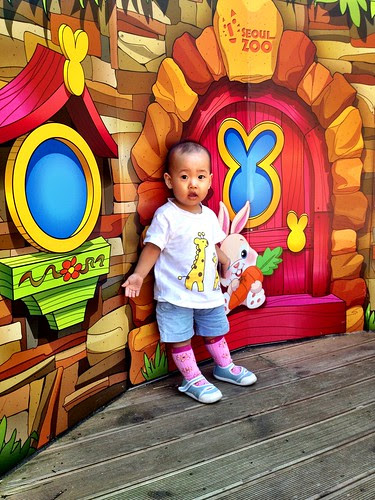 We recently went to the Seoul Zoo, as a welcome escape from the Zoo of Life that entails the daily happenings of the Farrand household. 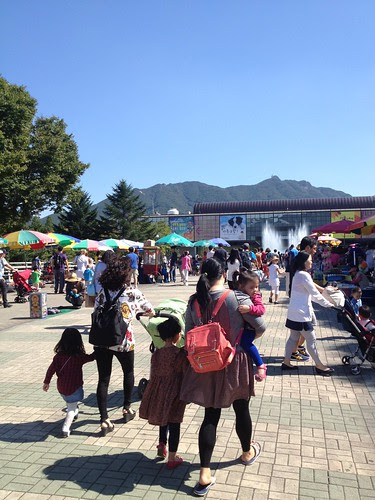 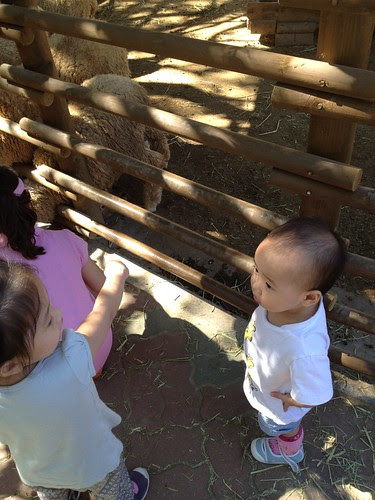 In the photo above, Baengy is communicating to the kid next to her "Why are you standing so far away from the action?" in baby eye-contact language. We have observed that she, in general, is not scared of animals. She's had close encounters with all manner of bugs, dogs, sheep, cows and horses without batting an eyelid.

A lady once held a chihuahua right next to Baengy, who was being held by Mum at the time. They glared at each other in a kind of hierarchical showdown of willpower. Seconds seemed like minutes. After an indeterminable period of silence, Baengy broke the impasse by reaching out, grabbing the dog's nose and twisting it counter-clockwise.

The dog pulled back, sneezed and withdrew its head in defeat. 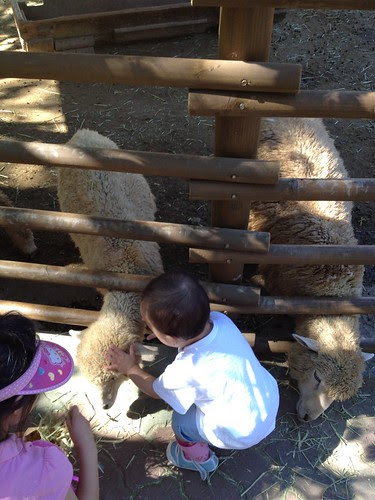 As each sheep stuck it's head out to nibble on the dried grass, Baengy went around sinking her paws into their wool and pinching their ears.

Although in retrospect, I think she probably mistook them for carpeted toys. 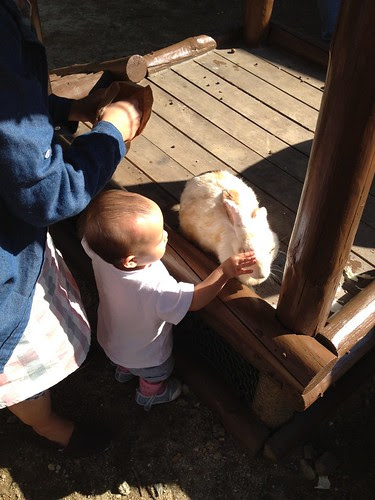 She also fed this giant rabbit for some time, before deciding to poke it in the eye with her thumb. The rabbit just closed it and pretended to sleep.

It must be a pretty liberating feeling to be a rabbit that no longer fears giant babies. 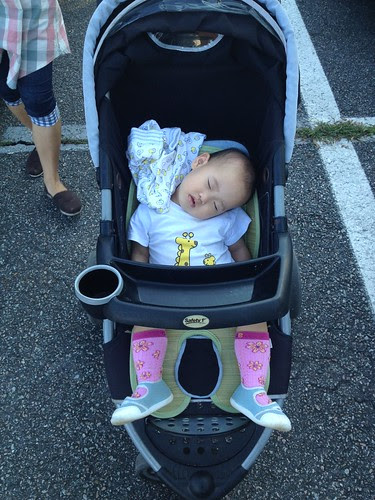 After any big day like one at the zoo, Baengy's brain needs to process the treasure trove of new information obtained. She'll pass out in a plethora of awkward positions and remain comatose for approximately 45 minutes. 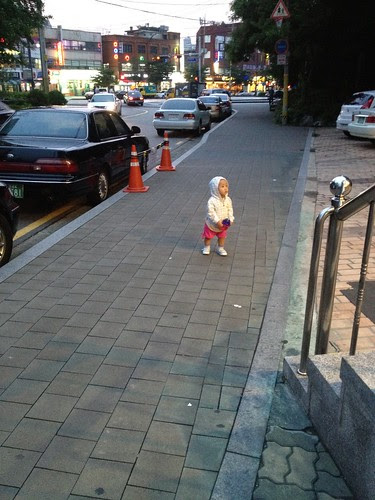 “The value of marriage is not that adults produce children, but that children produce adults.”
- Peter De Vries 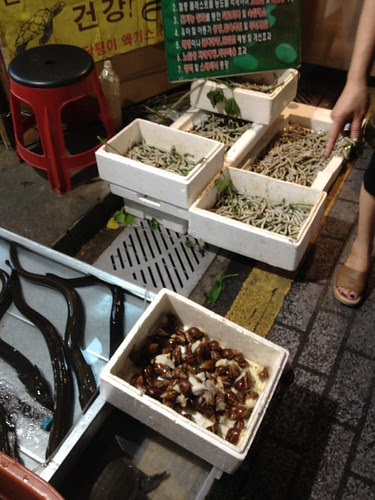 On a completely unrelated note, at our local Wondang markets, a new shop selling clinically-untested traditional remedies has opened. Some in Korea have strong opinions for or against such things. 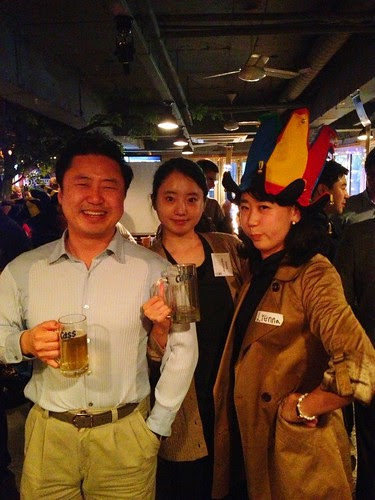 Here's a photo of Steve, Jooyeoun and Lienna, celebrating Oktoberfest at Beer Terrace. Funnily enough, our topic of conversation that night drifted toward this blog, and now they're on it.

Is this yet another case of metacircularity? 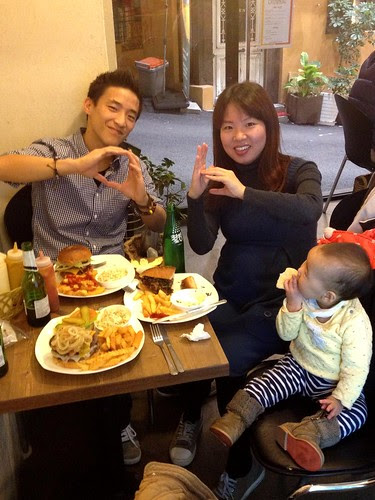 Here we are, celebrating the Obama victory in Itaewon with Ian Kim. I can't claim to be very knowledgeable when it comes to politics, although I do find it fascinating. I was happy with the election result, because Obama's stance on most issues are in line with principles I agree with, which include LGBT rights, generally reasonable foreign policy, compulsory healthcare and higher taxes for higher earners.

Taxing the rich proportionally higher might stir up debate in terms of fairness. But excuse the narrow analogy if one may contend that it's probably better to put more money in the hands of the poor than for the same money to be used to buy someone another Ferrari. 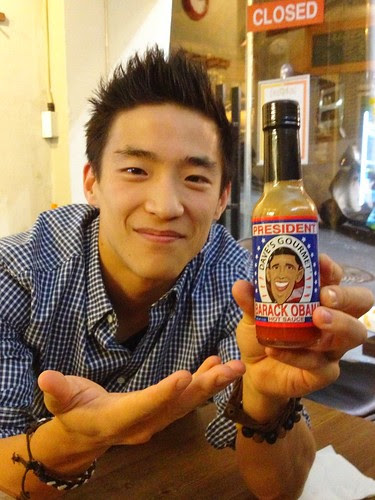 Ian Kim is Daniel Pak's cousin, whom I have known since our middle school years in Adelaide. Ian has grown into a rock of a man with strong values and ideals, contributing a substantial amount of his own money toward the Obama campaign. 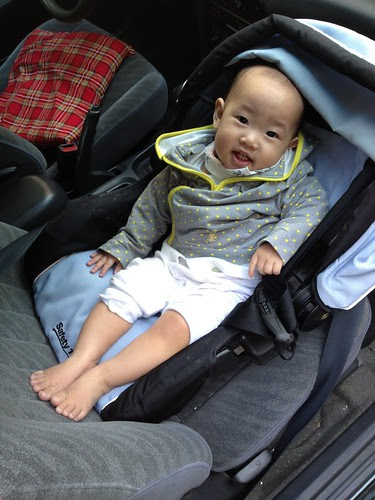 We're pretty sure that Baengy is going to follow Ian's example and grow into a rock of a lady.
She already has strong opinions on the quantity of rice she will eat at any one time. 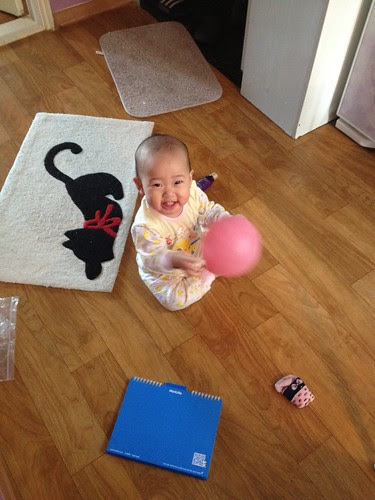 “Grown-ups never understand anything by themselves, and it is tiresome for children to be always and forever explaining things to them”
- Antoine de Saint-Exupéry 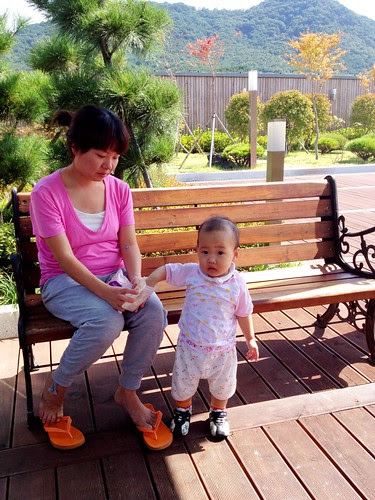 Here's Baengy and mother, visiting the outdoor area of the maternity ward where Heather will give birth to our second child next Spring.

Time is just rocketing by these days. 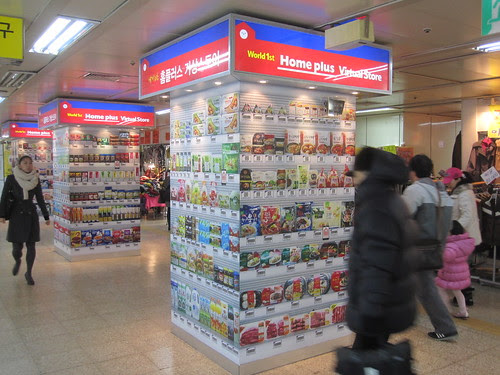 And for our final photo today, the columns above are Homeplus virtual supermarkets found in the subway stations here. Instead of stocking products on shelves, pictures of various grocery items are displayed. You can use your phone to take photos of the QR code underneath any product that you want to buy and send it to the Homeplus website. Within a couple of hours the goods are delivered straight to your house. It reminds me of that old song "Video Killed the Radio Star."

Here in Korea, as the weeks turn into months and the groceries turn into pictures of groceries, I can't help but wonder whether the correlation between my increasing age and an accelerating decline of the familiar is something worthwhile to mourn.

“It's paradoxical that the idea of living a long life appeals to everyone, but the idea of getting old doesn't appeal to anyone.”
- Andy Rooney

Email ThisBlogThis!Share to TwitterShare to FacebookShare to Pinterest
Labels: Quotes about aging

I really enjoyed this post! Watching little Baengy venture off into the world is such a delight. In every picture she's just as cute as the one before. The zoo part cracked me up...poking the bunny with her thumb and the bunny just closed its eye pretending to sleep. Ha ha, the wild stories of a two yr old.

Haha, thanks. We have a video of her meowing at the neighbourhood cat somewhere too...

Funny blog you're wasted as a scientist, you should be doing something that has bit more character in it!

I don't have time to go all the way back through your posts, so if you've explained already i apologise, but did you ever explain why you decided to go back to Korea permanently? Or was it just a trip back to see where you were born that turned out longer when you met your wife? Oh do you think you'll ever return to Australia?

Hi Steve, thanks for the compliment. I came back to Korea initially for a working holiday and stayed longer than planned. We intend to move back to Australia around the time that our daughter enters primary school.

your children was so cuteee <3

I dream about trip to Seoul, maybe one day my dream will come true. Thanks for the blog :)

I miss reading your frequent posts about life in the lab, like in the past. But now each post is gem because it is just so entertaining.

I like both your politics and your quotes used. Cheers.

Hey Lee, this is a great blog. I'm in Korea also. Are you still here? I wanted to connect with you and discuss some ways to make money from your blog. I'm using it with my blog and making some good money. Lets chat!

Be more you imagined said...

I like the collection of quotes you use here :) I'm sure Baengy will be happy when she sees this blog later as an adult :) My favorite quote from one of my favorite books says:
"I want my kids to grow up next to me. I don't want to send them to study abroad, when they are still growing. Because raising and educating kids is a very important process for both, parents and children…"
I'm sure you do a great job, Lee! ;)