I still haven't been up to much else except eating, drinking and having a good time. The koshiwon I'm staying at has a really good location, easy to find and close to everything. I'd recommend it to anyone who's looking for a decent place to sleep at a good price. 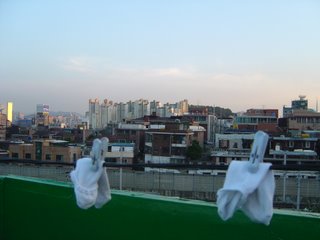 This is the view from the roof of my accommodation. Due to space restrictions here in Seoul, a lot of people hang their washing up on the rooftops. Those two socks you can see are mine. I bought them for about 50 cents. 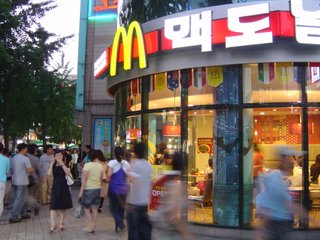 And this is Sinchon McDonalds, a prominent landmark and quintessential meeting place for everyone in this region. It's a busy location in the afternoons, with literally hundreds of people waiting around and meeting up with each other to go out for dinner and whatever may follow. If any of you come to visit me here, chances are we'll meet at this place. 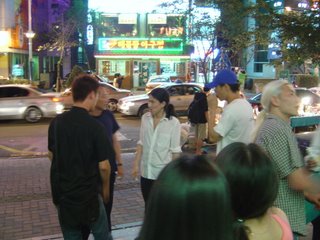 So after everyone arrives and pleasantries have been exchanged, the typical Sinchon meetup group will then migrate down the road and loiter outside a restaurant of choice. This is what Sinchon loiterers look like. 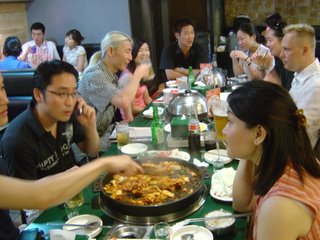 That particular night we ate dakgalbi, a kind of fried combination chicken and cabbage concoction that cooks at your table. Sometimes they put cheese in it. Well actually the cheese here isn't real cheese. It's more like rubbery play-dough that vaguely reminds you of cheese. 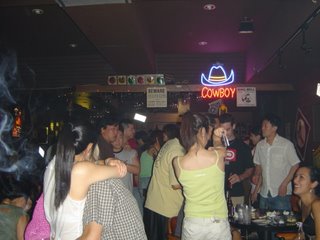 Then of course you go to a bar and drink until the sun comes up and burns your eyes. 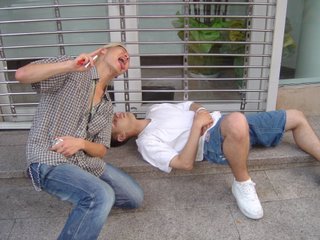 Here's what it looks like when the sun comes up and burns the eyes of those who have stayed out too long. 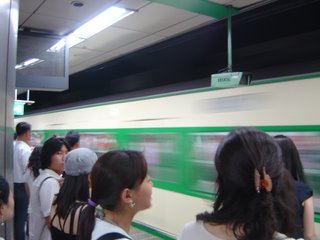 The subway system in Korea is super-efficient, convenient, clean and logical. It's definately my transport mode of choice. Seoul metro actually employs a team of mathematicians who come up with the best possible timetables to suit the largest number of people. The stations and the trains are all air-conditioned and you're never waiting long. 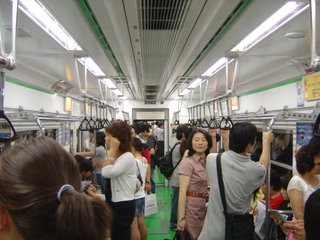 You can buy normal tickets to board the subway, or you can use T-money. T-money is probably the best invention that Koreans came up with since cyclic-automated-robotic-carparks that stack cars on top of each other to save space. I'll show you one of those in a sec. But anyway, T-money is a card that acts like a credit card for transport on the subway and buses. You just recharge the card when you want, and then you scan it at the turnstiles. It's kind of like a bluetooth system, the card readers instantly deduct what you owe and you don't have to worry about change or anything. 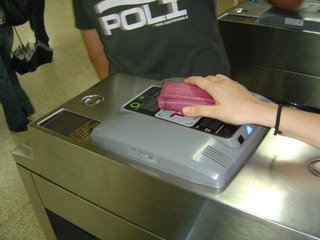 This is how you scan it to enter the subway. You don't even need to take the card out of your wallet, you just scan your wallet and the computer can read it. When you exit the subway you scan it again and it will tell you how much money you have left on it. You can also use it to buy food at mini-marts and make phonecalls from public phones.
T-money is the greatest. You will learn to love T-money. You will respect the T-money. Do not scold the T-money. 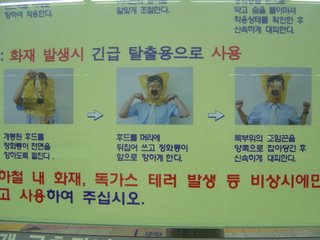 And if the whole T-money thing is too confusing, they even provide plastic bags to suffocate yourself with. Simply place over the head and pull the strings as shown. 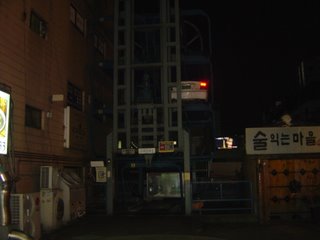 And here's the picture I owe you of a cyclic-automated-robotic carpark that stacks cars on top of each other to save space. This whole thing is a robot with a vertical conveyer belt. You just drive into it, get out of your car and put coins in. Then the whole thing rotates like a show ride and your car is stacked up. When you come back you put your pin in and it'll bring your car down for you. Very very cool. 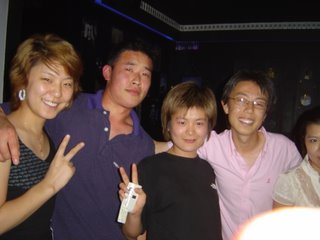 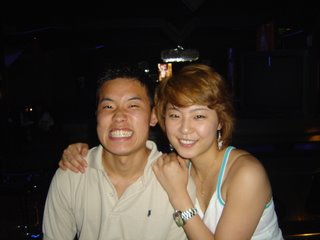 Here is my nuna (colloquial expression for older-sister). She doesn't speak any English but she still laughs at what I say. I guess I'm funny in any language?
My Korean hasn't improved much. So far I can only say "Where's the toilet?", "Please give me some beer" and "Where is my beer?" 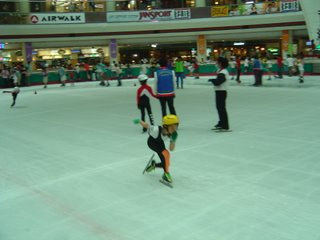 Yesterday we went to the Lotte World skate rink. This is an ice rink in the middle of an indoor themepark. While I was trying to compose my balance enough to stand still without falling, these little kids were zooming past. But one of the little kids had his helmet on backwards. Hoho. 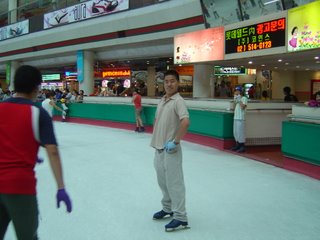 And here is the King of the Ice, at home in his natural habitat. Shortly before falling backwards and hurting his wrists.

Just kidding, I actually have a remarkable sense of balance when I'm sober. 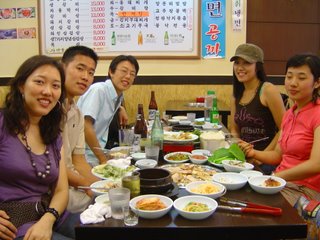 After a hard days work ice-skating we went and ate samgyeopsal, my favourite bbq type with wrapping leaves, kimchi and a naughty amount of pork fat. The meat has 3 layers of fat, but you can also get ogyeopsal, which has 5. If you don't like eating fat, I usually have enough room left so that it doesn't get wasted. 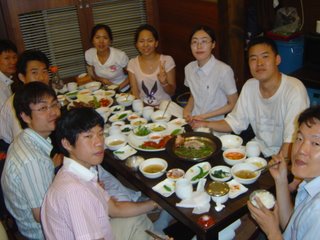 I've been really lucky and fortunate to meet so many nice people here. I met this group of Koreans last Sunday at the Yonsei University soccer grounds. There was supposed to an adoptee match there, but no one showed up except me. The guy on the far end of the table was playing with a Korean team, so I asked if I could join them and we played together. Then he took me to dinner with his friends. This Saturday they invited me to go to Daejon city with them to see a festival they have there. As I said before, I've been really lucky and people are really nice. 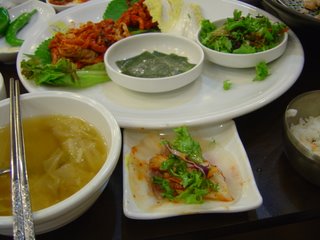 The samgyeopsal we ate that night was a bit more tastier than usual. We had different kinds of leaves and radish slices to wrap it up with. And the whole time the Koreans were teaching me new Korean words. But unfortuneately I forgot them. 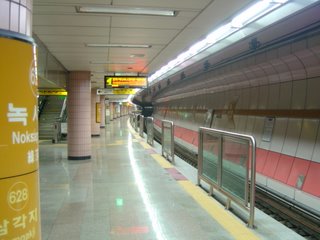 Here's what an empty subway station looks like. You can hear the trains in the distance, they make a kind of wailing sound. Then you get hit by a rush of air, then all of a sudden the carriages zip by at lightning speed and then it squeals to a stop. This might be old news to some of you, but back in Adelaide we don't have a subway.

That's it for me this time! And I've accepted a job offer in Busan to teach English to junior middle school students. Next Monday I start training in a special camp for one week before I head down there. When I start working I want to enrol in Korean language classes too. So that should be interesting. Hopefully I can post again before then though. Cyas.