I've had a little over 3 weeks vacation since leaving Adelaide now and it's been just what I've needed. The past few days I've tried to cut down a bit on the alcohol intake, but that comes at the cost of soju glass clinking, slurred socialising and semi-delirious zig-zag walks back home. 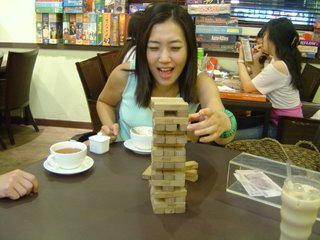 In Korea there are 'board game cafes'. These are nifty places where you can order coffee and play board games. They have tonnes of them around the place, with everything from Scrabble to obscure renditions of Dungeons and Dragons. The staff can instruct you on the rules of each game, and there are inflatable squeaky hammers that the winner of the game uses on the loser of the game. That's the incentive for playing at your peak. Here's Ji-Hyun trying to safely remove a Jenga piece without knocking over the tower. We invented a new kind of Jenga that night, called Jenga Doom Tower Edition. It's more fun. 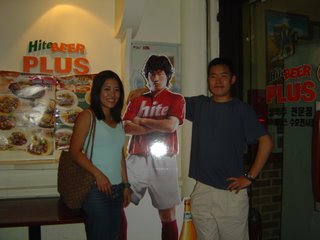 That night we were also lucky to meet Park Ji Sung, the famous Korean soccer player who plays for Manchester United. He was standing on the top of a stairwell and agreed to take a photo with us. The bottom of his shirt must be super shiny because it reflected the camera flash a fair bit. He didn't say much but he seemed nice. 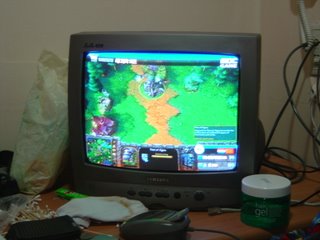 This is the TV in my koshiwon. In Korea there are a couple of channels that constantly play computer game tournaments. The players sit in a TV studio with an audience and play games like Starcraft and Warcraft III, with live commentary in the background. Being a bit of a gamer myself, I find it pretty interesting to watch. Right now there's a big tournament on in Seoul, called the World Cyber Games and there is a lot of prize money up for grabs. How much money you ask? Well it's enough to support teams of players worldwide who play games for a living. 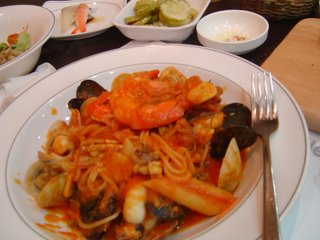 One of the only cravings I've had in Korea has been Italian food. I found a pasta place in Sinchon and ordered a spaghetti marinara, a fairly standard dish in any Italian restaurant. The dish itself was pretty good, plenty of shellfish and decent olive oil. But Koreans love their side dishes, and this one came with some sushi you can see in the top left, as well as an apple salad, a plate of gherkins and two sweet buns. 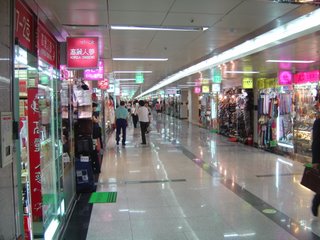 This is an underground shopping mall in Myeong-dong, a large commercial district in central Seoul. These types of malls are fairly common in Korea and can stretch for kilometres under the roads, branching off and linking large department stores above. In a nutshell, they're like huge, brightly-lit rabbit warrens filled with Koreans. 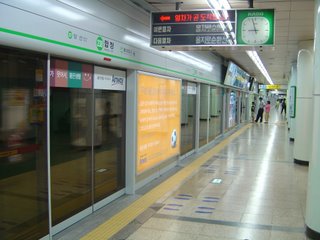 Here we are at the subway again. We've come back here because I wanted to tell you a story that someone else told me. This subway station is different because it's got sliding doors that isolate the tracks from the bystanders. Apparently they install this in certain subway stops and not others because some stations are suicide hotspots. More often than not, they're associated with a university. I guess the pressure of studying for exams must be pretty intense. 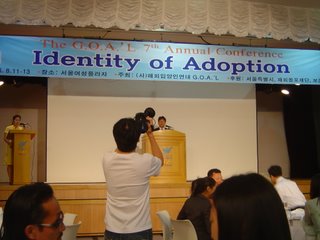 On Friday I went to the annual GOA'L conference. GOA'L is an adoptee-run non-government organisation that was set up to support Korean adoptees who return to Korea for various reasons. They've been really helpful to me and are a great resource. Some of you might not know much about adoption, but I'll keep it brief and say that adoption means different things to different people. In the photo you can see Dae-Won Wenger giving the opening speech. Dae-Won is the Secretary General of GOA'L, I guess you could say that he's the Kofi Annan of the Korean adoptee community. 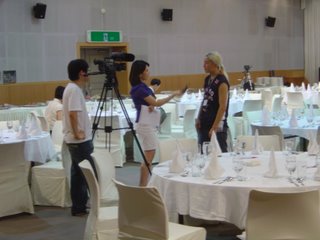 And here's Thomas, doing what he does best and dropping some lines on Korean TV. Thomas is a cool guy and his accent makes him sound a little bit like Arnold Schwarzenegger. 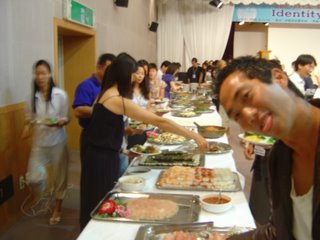 There was a really good buffet dinner that night and they had everything from sushi and octopus to cute little green-tea cupcakes. 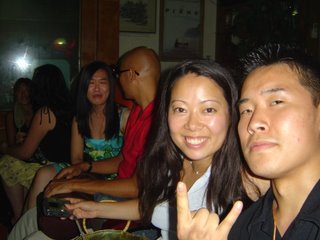 Somehow we found our way to a bar later that night and somebody ordered drinks. I was about to protest against this indulgence, thinking about my health, but I caved in to peer pressure. This is Maria from Boston and she's a librarian. Apparently librarians have conferences too, and after their conferences they all get wild and behave like post-conference adoptees. 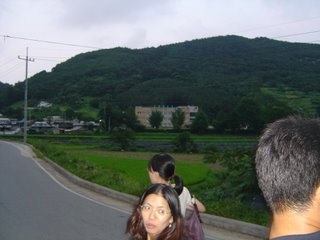 Today I went to the countryside with the new Korean friends I met last week. We attended the 2006 World Peace Model Festival near Daejon city. This is some of the scenery on the way to where it was held. The Korean countryside is very lush and green and characterised by sharp low-lying mountains and small rice fields. 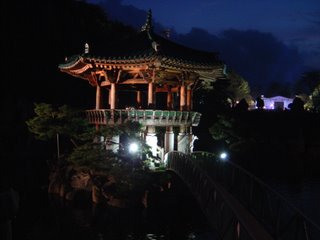 This temple in the area is called kakkuljang and is surrounded by water that had small boats in it. The air was warm and the scene was really peaceful. 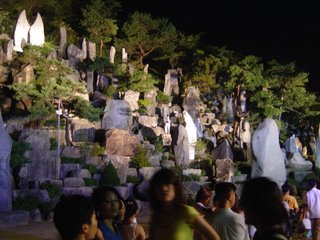 There were also a lot of large carved rocks arranged in upright positions all over the place. One of the guys told me that some of them take about 10 years to carve. They looked really good and reminded me of the menhirs that Obelix used to carve in the Asterix comics. 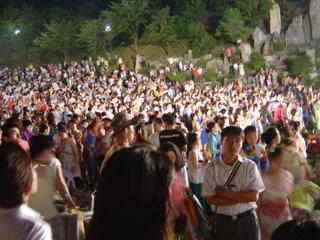 I didn't quite understand the festival's relevance to world peace but I did see a lot of models doing choreographed dances and there was a marching band. So I didn't complain. My new Korean friends were really nice to me the whole time and even paid for my ticket. Gamsahamnida (= thankyou). 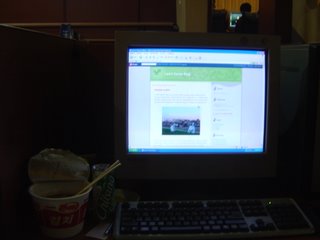 This is my PC Bang desk that I'm blogging from right now. In these places you can get some ramyeon noodles and a drink for about $2. The price for using a computer is about $1 per hour, which kinda makes it more economical than buying your own and getting it connected. Hey look, there seems to be an amazing blog up on the screen at the moment.

It's 5am in the PC Bang I'm in right now. There are about 20 other people in here playing games, and 2 who are fast asleep at their desks. I tend to come to these places when I feel like chilling out. My biological clock has gone a bit funny (flat batteries?) since I left Australia, but I'm sure it'll restore itself after I start doing some work.

Speaking of which, tomorrow the English academy I'm about to work for is putting me in a hotel in Gangnam for my training program that will last a bit more than a week. So that should be interesting and as always I'll keep you posted on how that's going. 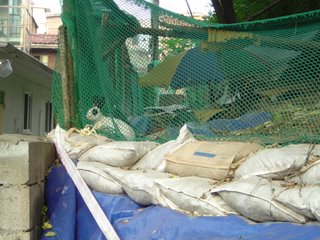 Anyway here's a picture of a rabbit in someone's backyard near my place. Seeyas.
Posted by Lee Farrand at 4:25 am