Well it's been 3 months since I touched down at Incheon airport. A lot has happened in that time and Australia seems so far away now, but in a way it also feels like things have gone by strangely fast. It's funny how time is like that. 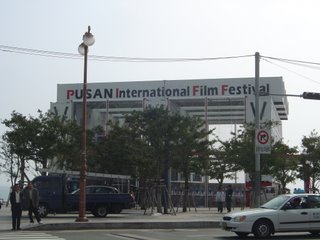 Recently the annual Pusan International Film Festival took place in the city. It's the largest film festival in Asia and attracts visitors from all over the world. The main gate was on Haeundae beach and was constructed from shipping containers welded together. 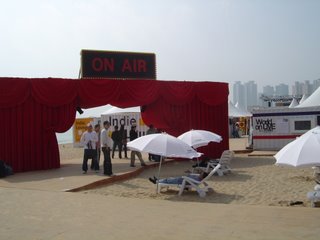 There were movies showing at various locations around the city, with people passing through the various displays and buying tickets. Many of the movies sold out on the first day the tickets were available, so it was difficult for us to get our hands on some. Next year I'll book in early through the internet, which seems to be the best way. 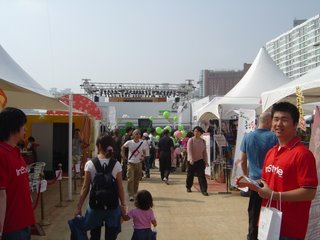 Jef and I went early one morning to try and get tickets for a movie, but they sold out before we got there. So we bought the last two tickets to another movie that we didn't have a clue about. It was a Singaporean animation called "Zodiac - The Race Begins". What did we think of the it? Well it was a kind of fusion of some really bad Disney and Bollywood, but sterilised beyond recognition. I don't think it will be getting a public release, so you have all been spared. 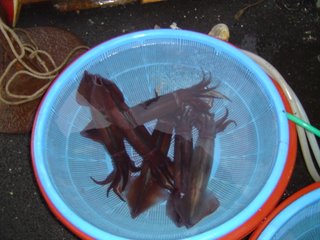 We ended up back in the Jagalchi fish markets another day. I've stared at the live seafood shops for hours. It's not just the seafood itself that's interesting, it's the way the shop ladies hand it out to customers. There's a lot of skill involved in getting a large writhing octopus into a shopping bag. 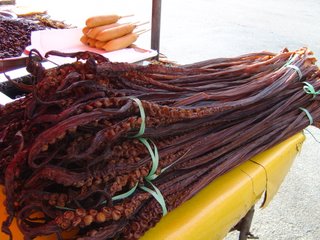 These dried tentacles are from giant squid and were over a metre long. The suckers on the ends are lined with little spikey teeth. The lady behind the stand was a bit disappointed that we didn't purchase any and displayed her dissatisfaction by baring her gold teeth at us. I'm not really sure how you're supposed to eat them. 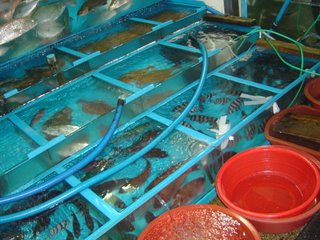 In this photo you can see flounder, salmon and some stripey fish that I don't know the name of. This is at the front of a restaurant and if you stand still for more than 15 seconds, one of the ajummas will come out and start pulling your arm. A couple of lines of English will get them to stop, after which they'll usually give you a startled look and then have a fit of hysteric laughter. Well, that's if you look Korean. 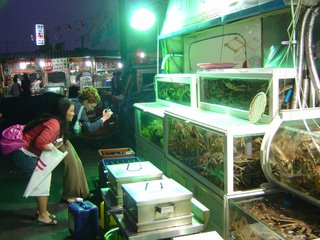 Here's Amanda and Meaghan inspecting some king crabs. I've eaten these back in Australia and they're not bad. I think the blue swimmer crabs are a bit tastier though. These aquariums don't have lids on them because the crabs are too heavy to lift themselves out. Sometimes you'll see legs half dangling out and from a long way away it looks like an alien hand. 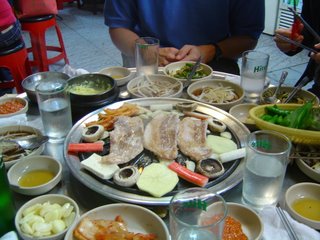 This is one of our favourite local bbq places. Around 50% of restaurants in the area are like this, but we like the lady at this one because she cuts up our meat for us and teaches us Korean. 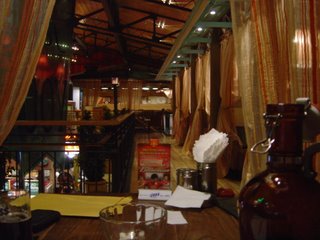 One of our newer discoveries have been micro-breweries. There are a couple of them around Seomyeon and they usually have a couple of their own light ales available. The atmosphere at these places is a little more relaxed and the food is a little better than at the average watering hole. 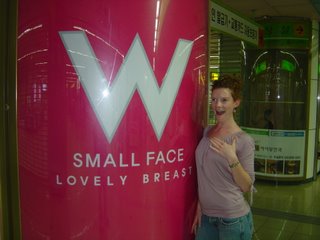 Plastic surgery is pretty big in Korea and there are some humourous advertisements in the subway. Here's Meaghan posing next to one. 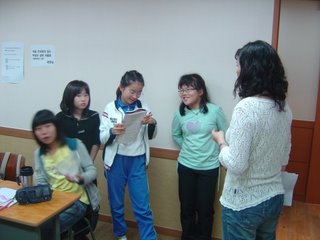 Here are my students talking with Ji-Hae during break. Elementary school students can be a little noisy sometimes, but in general they study a lot harder than I ever did at that age. Last weekend I gave an English presentation to their parents about the lessons we teach. That was interesting. 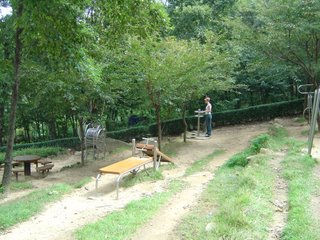 A while back, we went for a walk in the mountains near us. From our area it's only a ten minute walk and there are some picnic areas and nice views along the way. This is an exercise circuit set up for the general public about halfway up one of the trails. You can often see old ladies doing exercises to varying degrees of intensity. A lot of them like to walk and clap their hands at the same time. 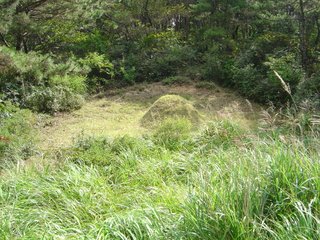 You can see these little grassy mounds in all sorts of nooks and crannies around the mountains. They're burial mounds, marking the graves of the deceased. You'd think it would get a little creepy, but actually they're quite pleasant to look at. 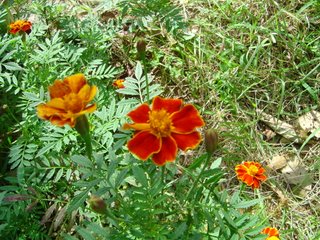 This is a flower I took a photo of. I'm not much of a botanist but I appreciate plants. And I like salad. 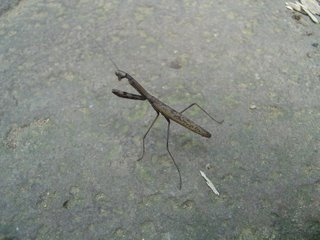 And this is my macro shot of a praying mantis. I nearly stepped on it when we were coming back down. In Australia, they're usually green. 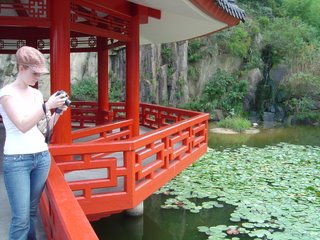 Dong-eui University is also close to us and built into the mountains. The whole campus is on a steep slope and it's challenging to walk from one end to the other. I heard it was built like that because slopey space is cheaper. This is a water garden they have in the middle. 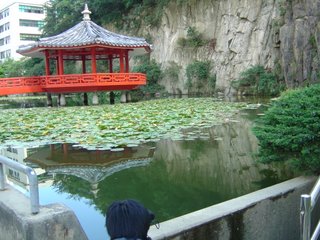 There were large carp swimming in the water too. It had a really peaceful atmosphere to it. The guy whose head you can see on the bottom was filming a video. 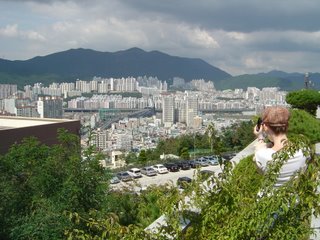 This is the view of Busan from halfway up the Dong-eui University campus. There's more Busan on the other side of those mountains. 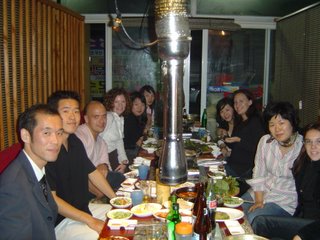 I think our school branch is going pretty well. On Thursday Donna, the boss in the white shirt, took all the staff out for a pork party. The only thing I like more than a pork party is free alcohol to go with it. 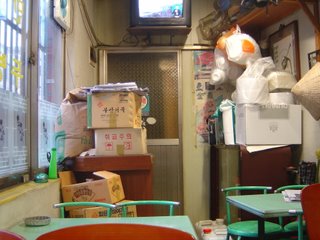 A lot of small eateries in Busan are attached to the house of the owners. Often you'll see them lying down inside and watching tv or something. Sometimes they're fast asleep, but jump to their feet when you make some noise. This is a place just around the corner from the school that's really small and feels cosy like a dining room. You can get noodles for $2. 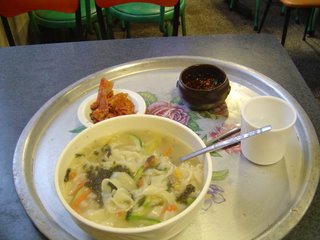 And here are my kalguksu noodles, cheap, fast and delicious. I eat a lot of dishes like this for lunch. A humble meal for a humble man.

Oh well that's all for this time. Cyas!

What do you think about plastic surgery? Is it moral? I personally don't think so.

A moderate waste of money, but whatever floats your boat.

I can't believe Korean food is so cheap! Go Aussie dollar! I guess I sort of had an image of a quasijapan for Korea but from the looks of things its more like VietnamXproper streets. I'm shocked. And happy :D