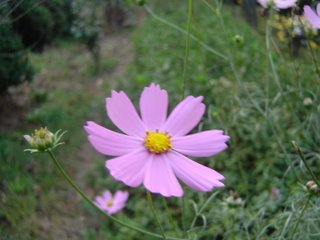 Every so often you can get lucky enough to snap something that describes itself. This cosmo flower was sitting on the side of the path through the mountains near my apartment. I walk up them from time to time, although it is getting a little colder these days. 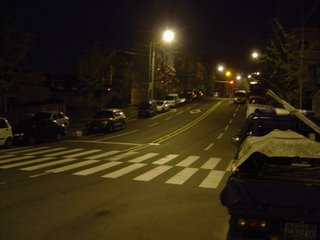 The weekends are usually spent noisily and we end up getting home early in the morning. It takes a couple of days for my body clock to adjust back to normal sleeping hours, so quite often on a Monday night I'll walk around my neighbourhood which is always very peaceful. This is what many of the streets look like at that time. 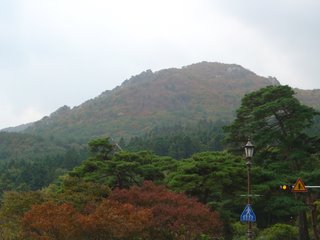 Last weekend we went to Beomeosa temple, one of the largest and well-known temples in Busan. It was fairly easy to get to from the subway, but still situated deep in the forest. 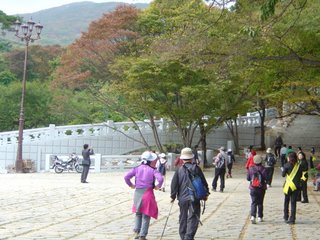 A lot of other people were there that day. Koreans like to buy all sorts of specialised hiking gear for their regular walks in the mountains. That guy you can see in the front is carrying a collapsible titanium walking stick. 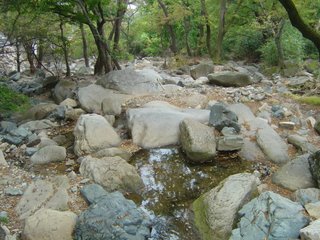 The temple is built around a running stream that you can drink from at the top. This sort of scenery reminds me of the Morialta Falls back in good ol' Adelaide. We used to go walking there a lot, back in the day. 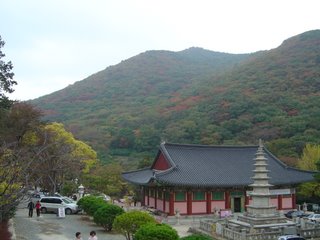 A short walk later and you arrive at the temple complex, surrounded by forest covered hills. The architecture in temples around Korea has many similarities, but each complex has a slightly different feel to it. 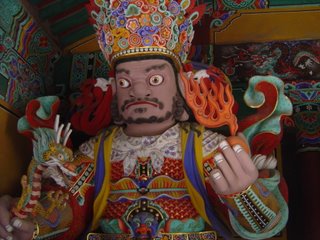 There were four of these intricately painted statues guarding the main entrance. They were about 3 metres high and are supposed to keep bad spirits away. I didn't chance upon any bad spirits, so they obviously do a good job. 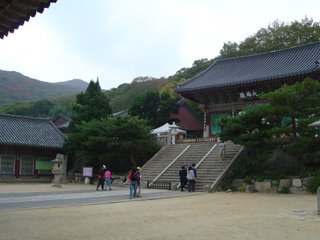 There's usually a main temple that is a little bigger and more decorated than the others. Those stone steps lead to the main one in the Beomeosa complex. Smaller temples surround it and each has its own theme, such as fertility (which is the only example I can remember). Lots of young couples come to places like these when they are about to get married. 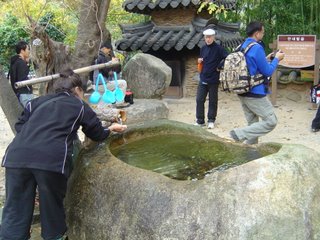 Fresh stream water runs into this carved rock that you can drink out of. The water is very cool and refreshing. The blue cups you can see are communal cups that you find at every such place. Everyone uses them without qualms about germs, something you wouldn't find in many western countries. I use them too, and I try to not think about how easily a single person with Herpes Simplex might infect dozens of people. 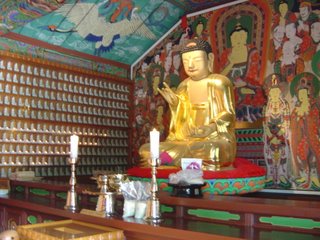 Korean Buddhism is a little more shamanistic than the philosophical kind I tend to hold in higher regard. The atmosphere in these places is very tranquil, and even though there are sounds from outside it tends to somehow dampen when you are inside. There are usually candles lit and incense burning. 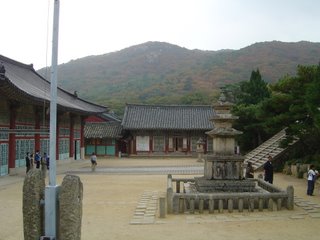 During the big APEC summit a while ago, temples started offering 'temple-stay' programs where members of the general public can pay a small fee and live like a monk for a weekend or longer. You wake up when the monks wake up, help clean the temple and eat temple food. They also teach you how to meditate and live like they do. The program was so popular that it's still going now. It sounds like a really good idea so I might try it sometime. 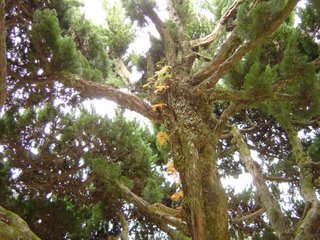 This is a pine tree that looked nice so I took a photo of it. 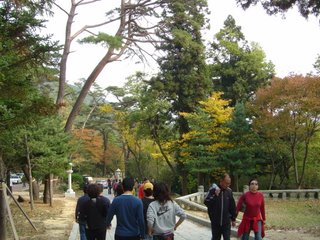 Winter is coming and it's getting cold these days. Back in Australia, it never really dropped below 14 centigrade or so during the daytime. This year they're expecting snow down here. The trees have nice colours on them too, from deep reds to bright yellows. 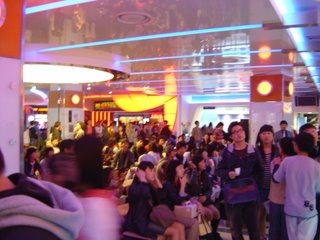 On Sunday we decided to watch a movie at the Lotte department store. Unfortuneately it seemed that the whole of Korea had the same idea. It was really crowded but not so hard to get a ticket. We watched Guardian, with Kevin Costner in it. It was okay. I'm glad they don't dub the movies here, all the English ones are subtitled in Korean. 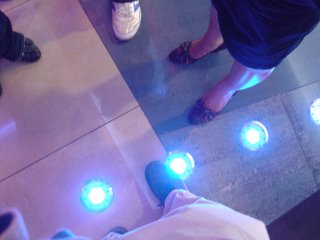 And here's what our legs look like when we go to the cinema. Those lights are a little more impressive in real life, just try to imagine them changing colour. 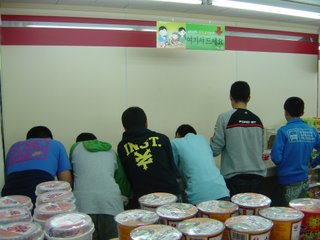 In convenience stores around Korea they always provide you with an instant noodle dining area. There's always a small benchtop, hot water service and a bin with a strainer in it so that you can just buy the noodles and eat them in the shop. I've done it once or twice and it's pretty cool. Here are some kids from the hood showing the blog viewers how it's done. 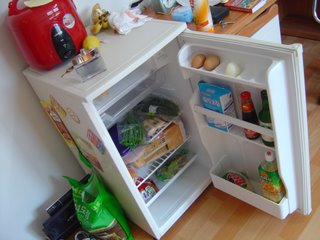 I thought it timely to show you a picture of what's in my fridge. In the bottom left there is some Homeplus kimchi. In the door there is some Australian Beqa cheese that you can buy pretty easily here and also a carton of thickened cream. Cream in Korea is hard to find, because they're not too big on dairy products. I bought it because I wanted to make spaghetti carbonara for my friend, which turned out well. On the left of the fridge is my bag of short grain rice and on top of the fridge is my new rice cooker called Liam. I named him that because the brand is Li-hom, which kinda sounds the same. 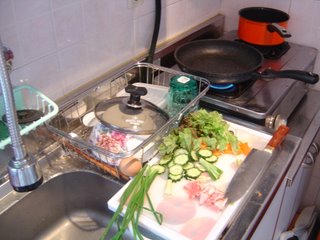 I've started cooking at home more because the eateries nearby get a little tired sometimes. Usually I cook Italian food, because it's refreshingly different from Korean cuisine. Korean food is good, but it doesn't vary a great deal. As someone else so eloquently put it: "Variety is the red pepper paste of life." You'll understand it after you live here a while. 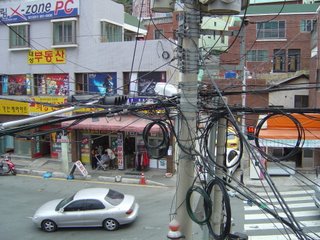 Here's a shot out of the window of the local PC bang. Electrical poles in Korea are often an interesting concoction of wires and dangly bits. I've seen setups more intricate than this one.

Life in Korea is going very well. My language abilities are starting to pick up a bit after a long beginning. I still can't maintain a conversation, but I can describe things that I see or want at the level of a Korean 3 year old. But my pantomiming skills are very adept. Well, that is apart from today when I tried to describe the type of haircut I wanted to the hairdresser and ended up looking like a new recruit. Oh well, as the Koreans say "kege iseng i ya!" (that's life!).

My name is linus chung. I read your blog with great interest as i am about to visit korea. I personally blog at thefrogcroaks.blogspot.com and I am on facebook as linus chung.

I am malaysian chinese, 29 years old.I am wondering if you are up to housing a traveller,i like to travel backpacker style and live with real people.

If you are drop me a line...linus_frog@yahoo.com it be fun to make a new friend iand i promise you the same hospitality in malaysia.