Well christmas and New Year's have come and gone in Korea. I was working for much of the time but got a chance to get out and celebrate. 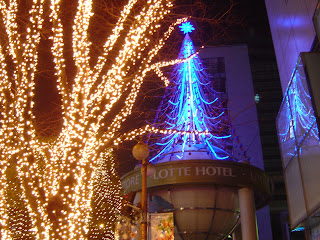 Christmas in Korea isn't celebrated as much as it is in the west, but department stores like Lotte tend to decorate for commercial reasons. Here is a christmas tree on top of the Seomyeon world globe with the back-to-front Australia on it. 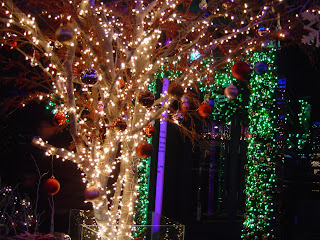 Some more sparkly lights. This would have been my first white christmas if it had snowed. It has snowed twice since I've been here, but only tiny sprinkles here and there. Enough to give you dandruff, but not snowmen. 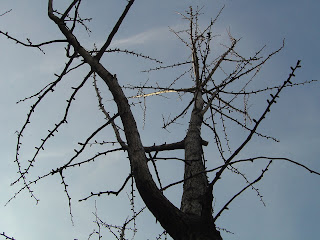 Here is a tree, with some sky, on a cold Busan morning. I now own a pair of gloves and a scarf, items I only wore for fun when I was a young boy back in Australia. 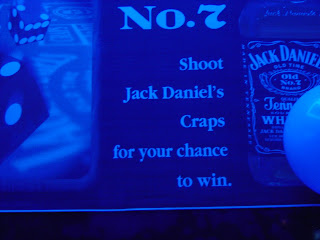 This is a poster in the New York bar in Seomyeon. Sounds like a fun game, requiring face shields. 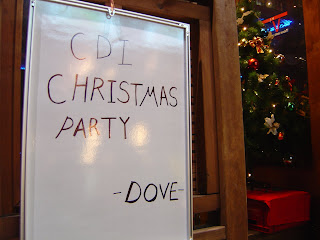 Towards the end of the year, a bar called Dove in Dongnae had a little party for us. Some of the teachers visit there regularly and one of them is dating a barman. These things tend to happen easily in Korea. 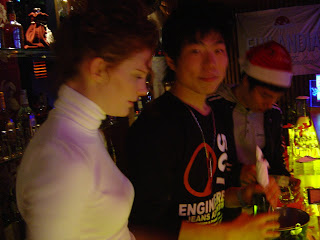 Here is one of our teachers, who may or may not be dating aforementioned and pictured barman. It was a good night and then we ended up going somewhere else. 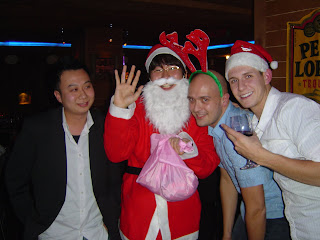 Santa was good enough to pay us a visit, even though we weren't always such good children this year. He lost a lot of weight and his English has gone wonky since last time I saw him. Ho ho. 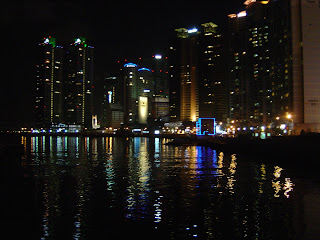 Our company also put on an end of year show at Dalmaji hill, which is a scenic part of Haeundae, overlooking the beach. This is kind of what the view looked like, but further away. 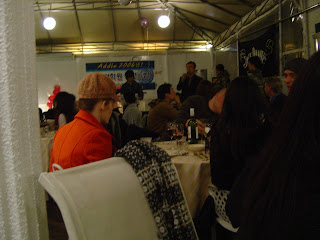 There were around 70 or so staff members, with an alcohol supply and a Korean band. Fairly good, except the food took way too long to come out. The last person at our table got their food when the rest of us had finished over an hour prior. 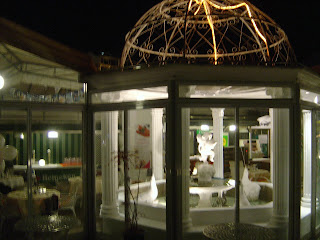 A view of the restaurant from the patio area outside. 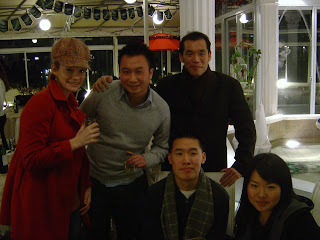 Here's me with some of our school staff. We're a pretty cool mob and everyone gets along well. That guy who looks slightly flushed and possibly inebriated is John, our new teacher from Canada. He just bought an X-box 360. Mmm. 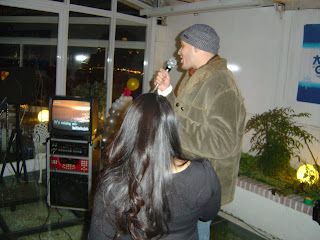 And after we had consumed the necessary beverage quotas, some reached karaoke flashpoint and began to sing. I believe this particular song was 'It's raining men.' 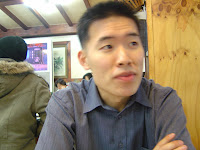 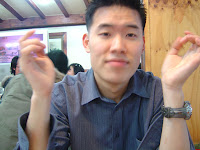 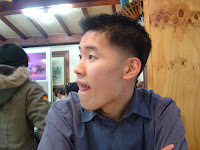 On Christmas eve we ate bossam at a restaurant in Haeundae. These photos are of me, talking about various topics while waiting for the bossam to arrive. They were taken by an anonymous photographer, who I'm sure was listening intently. 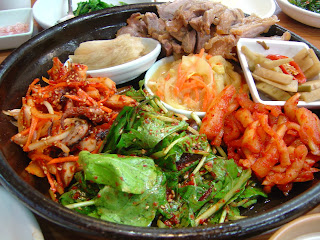 And this is bossam. It's a combination of steamed pork and vegetable dishes that you wrap up in cabbage leaves and dip in chilli sauce. Quite delicious and easy to eat. 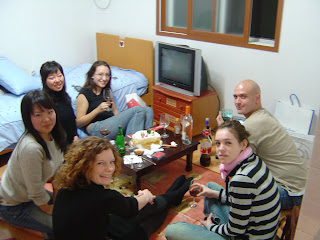 On christmas day I invited the teachers over to my little flat for a dinner party. Jef made pumpkin stew, Elissa made salad and I made curry. We drank and played games and it turned out to be a really good night. 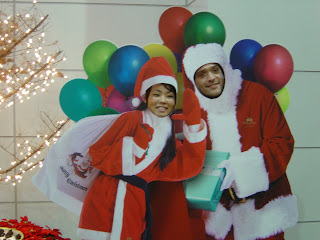 Here's a special christmas greeting from Jef and Amanda to the Lee's Korea Blog readers. 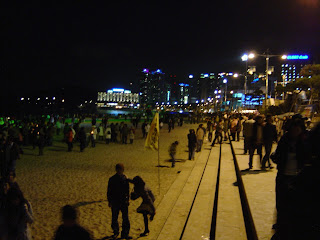 And then, before we knew it, it was New Year's eve already. We had a buffet dinner at the beach and then went for a walk. There were a lot of people out and about. 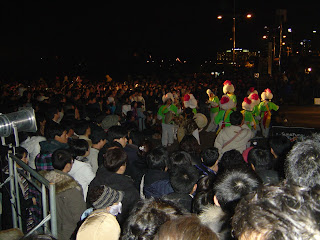 There were some drumming performances and people selling food. It had a carnival atmosphere to it. As the final hours of 2006 dwindled, more and more people arrived at the beach. 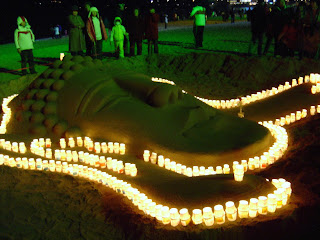 Someone had built this candlelit buddah sculpture out of sand which was rather pretty. There were also some vendors selling special helium balloons, that carried candles and wishes scrawled on paper, off into the night sky. 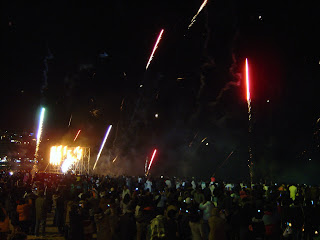 At the stroke of midnight, fireworks lit up and everyone cheered. Pretty much your average New Year's, except with a tonne of Koreans on a beach sharing it with you. 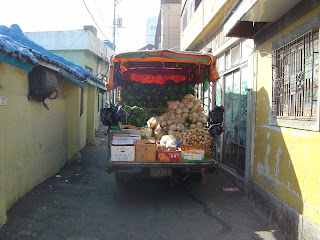 So that was my festive season. Quite enjoyable really, but I can't believe it's 2007 already.

Anyway, here is one of the many trucks that patrol the narrow streets of Korea during the day. They sell a variety of produce, mainly vegetables, and they drive along at a snails pace. Kind of similar to the ice-cream trucks back home. A loud speaker recording calls out the prices of each particular item in a dreary voice. It's woken me up on many a hungover morning.

Well that's all for me again. Hopefully this year will be as interesting as the last. Cyas!