Well it's been six full months since I set off on my merry little journey from Adelaide. I must say I feel pretty lucky the way things have gone so smoothly and am still glad to be here. To celebrate, I've decided to start blogging with bigger pictures. 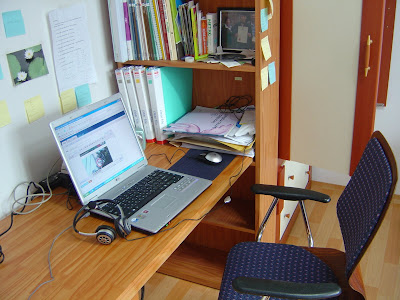 Aah the fruits of labour. This is my new laptop that some helpful Koreans obtained for me through an auction website. It's very fast and with all the bells and whistles, Core Duo processor and bluecore. I ordered it on a Wednesday afternoon and it arrived on Thursday morning all the way from Seoul. And internet connection in Korea is superfast, I'm currently blogging from home with a 10Mb/s connection. It costs about thirty dollars a month. 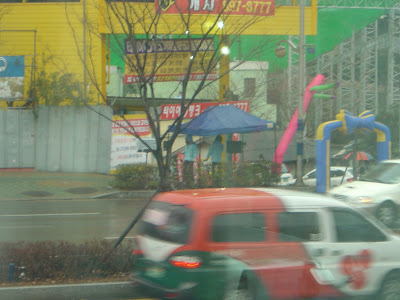 See those girls standing under the little tent? They're promotion girls and their job is to stand outside a new business for a few hours and attract attention to it. They sing karaoke, dance and talk about things. This new shop has opened just over the road from us and so I arrived at work the other day listening to very loud Korean karaoke blaring from across the road. They were a bit out of tune and the day was raining and cold. The new shop they're promoting sells car tyres. How exciting. 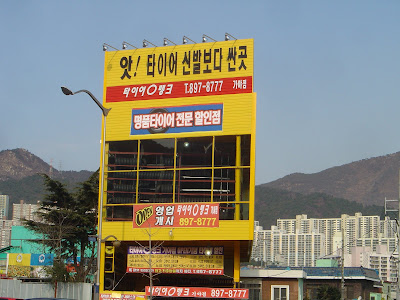 This is what that new shop looks like on a sunny day. The whole building was constructed out of welded i-beams and sprung up in a couple of weeks. The Korean writing at the top says 'Wow! Our tyres are cheaper than shoes'. 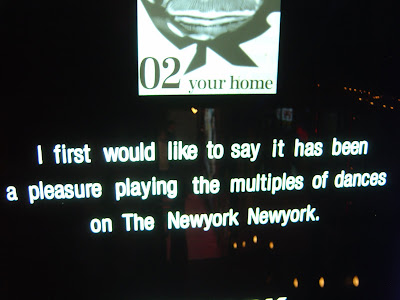 This is the stairwell sign that welcomes patrons to the New York bar in Seomyeon. I'm not sure what it means, or if anybody actually said the quote, but it's amusing. 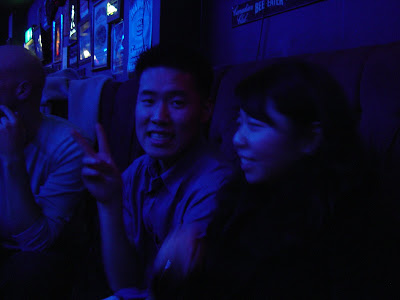 Here's me, hanging out in the bar with one of my older students from Haeundae, called Michelle. Michelle speaks Japanese and used to be a tour guide. Now she works as an operator in the hotel. In the mornings she sometimes gives me coffee or bread from the convenience store before class. What a sweetie. 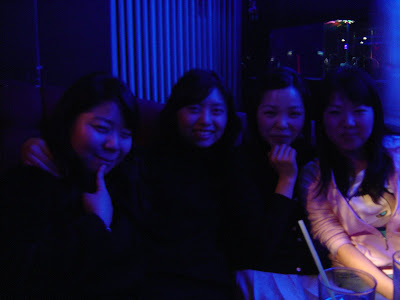 And here are some more of my students from the same hotel. On the left is Michelle, then Emilia, Margaret and Heather from our language institute. I call them 'The Naughty Busan Ladies', because they're always gossiping and being cheeky. 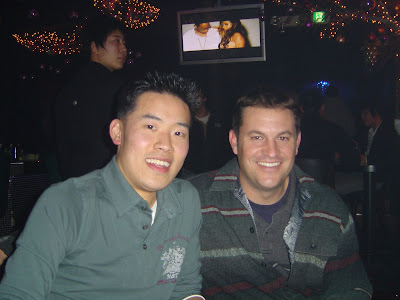 This is Dave, who is a friend of a friend in Busan. Dave is one very cool guy who is a fighter jet pilot for the USAF based in Korea. He flies F-15s regularly between Hawaii and Gimhae in Busan and is getting relocated to the UK soon. Naturally after I found out he was a jet pilot I felt the need to ask him approximately six million questions. F-15s are a very technomalogically advanced combat aircraft and can climb to a ceiling of 10 Km from the ground in under 60 seconds.
Some of the more interesting things I learned from him are as follows:
- F-15 pilots wear 'poopy-suits' which are watertight plastic bag pants that you can toilet yourself in while flying. However, they are filled with a special chemical powder and so when you pee, a reaction takes place and all of your pee instantly turns into a solidified gel. Kinda like hairgel.
- When flying at night over the Pacific Ocean, it's standard to fly high up in the atmosphere. At such heights and with their nightvision helmets, Dave says 'the view is beautiful and you can see every star and all sorts of cool things like comets and things you'd never see at ground level'. It's apparently one of the best things about flying at night.
- Dave's fastest speed is Mach 1.7 (Mach 1 is the speed of sound, or 1,225.08 km/h). At that speed, things apparently get scary and bits can fall off the plane. When something goes wrong, it goes wrong in a big way. If you eject at Mach 1.7, you'll be fine, you just won't have any limbs.
- The USAF issues jet pilots with chemical stimulants which are basically identical to speed (methamphetamine). That's because during ten hour flights sitting in the same seat it's nearly impossible to stay awake. They also have sleepy pills to knock you out once you land. Dave has a whole bunch of leftover pills sitting at home but he's not allowed to give them to me.

Dave is a cool guy. Why didn't I think of being a fighter jet pilot? While he's flying a 30 million dollar aircraft at Mach 1.7, I'm teaching little kiddies how to say 'The small dog is happy, but the tall man is angry'. Mmm oh well. 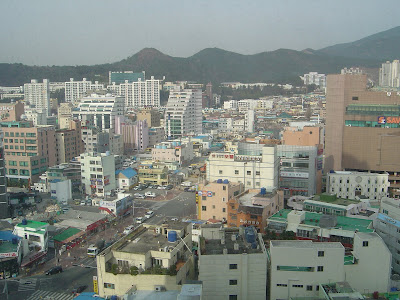 For four days a week I'm working down at Haeundae beach, teaching English to hotel workers. It's a nice change from the classroom and definitely a different atmosphere. This is the view of the city from the floor that I teach at. I often gaze out of this window while I wait for the workers to turn up. 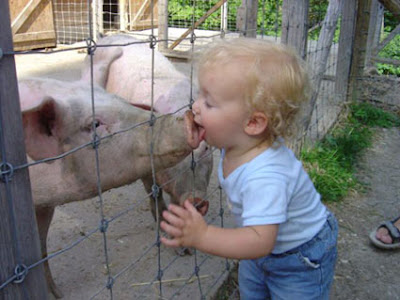 Hey look it's some kid licking a pig's nose. I didn't take this photo. I found it on the net today and thought it looked nice so I've posted it for you all. 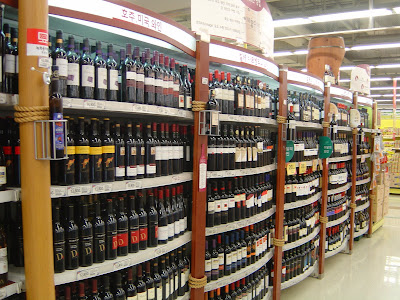 In the local supermarket (called Homeplus), they have quite an impressive wine selection. Grape wine isn't very popular in Korea but it seems to be slowly catching on. The shelf on the immediate left is the Australian selection. There's a lot from near Adelaide, like Yellowtail, Penfolds, Deakin Estate, Hardy's and Lindemann's. Luckily my co-workers like Aussie wine too. 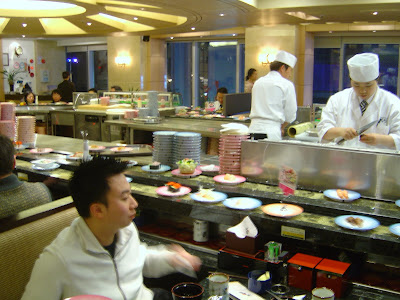 Last weekend we went to a new sushi train in Haeundae called Denfuku. It's a really nice place, with the best sushi I've had in Korea. They have a lot of strange dishes that I've never tasted before. I made a short movie clip that you can see at: http://www.youtube.com/watch?v=aVUFQLOvrzI 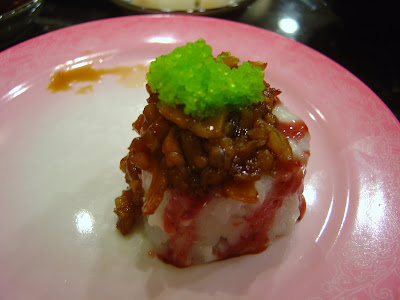 Here's one of the fusion style sushi dishes they have on offer. On top of the bed of rice is some sort of sea-vegetable topped with fish roe and cranberry sauce. It sounds like it might taste a little weird, but it actually goes together really well. 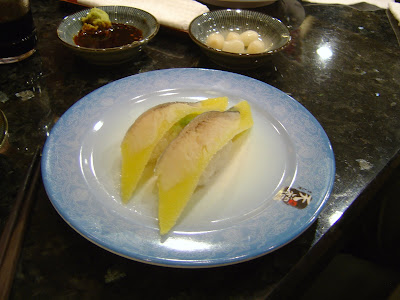 And here's one of my favourites. I'm not sure what the fish is, but it's really fresh and the yellow stuff is caviar attached to the fillet. Also the wasabi here is freshly ground and packs a punch if you take a little too much. I like wasabi punches, I always come back for more. 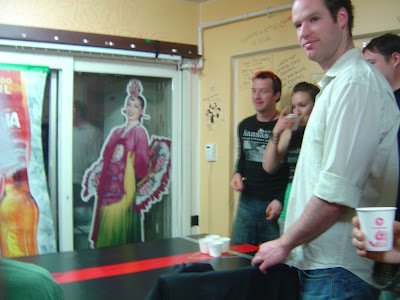 Later that evening we went to Sean's place. He's a friend of John and lives near the beach. There were a few people there that night and a nice amount of drinking going on. 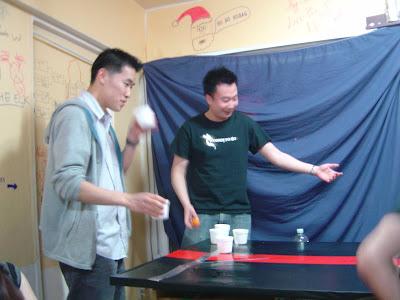 We were introduced to soju-pong, which is an interesting game played by English teachers here. The aim is to take turns throwing ping pong balls into other people's cups. The cups have soju in them. When you land one in, the other team has to drink it. If the ball bounces off the rim of the cup and bounces once, you can catch it and the person who threw it has to drink. John and I were pretty newbie at it, so we lost badly. That's me playing there, with John. See, I'm drinking two cups simultaneously. 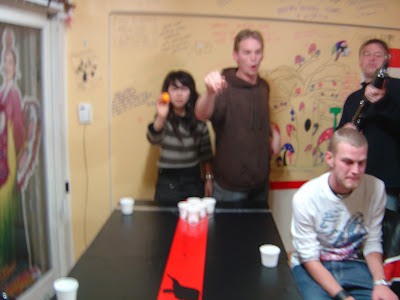 Soju is about 20% alcohol and is made from rice and possibly old bits of fermented cardboard. This is what the view looked like from our end of the table after we'd taken a few hits. Note the realistic soju blurriness. 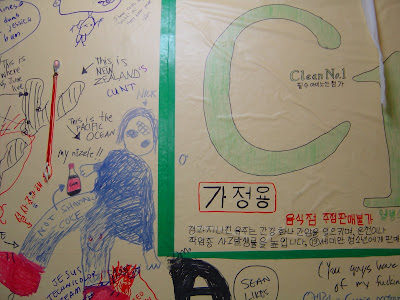 Sean has put up his own blank wallpaper in his flat, so that people can write whatever they like on it. A lot of it is interesting and humourous. It kinda reminds me of the old toilet wall graffiti in the university library toilets. 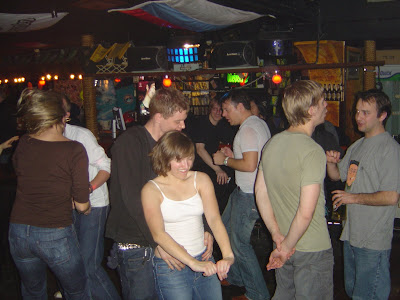 Last weekend we went to a popular bar for westerners, called U2. It's not a bad place, lots of dancing and merriment. From various information sources I have learned that the Russian bar chick who works here is married to the Korean dude that owns it. Sometimes they give us free popcorn. 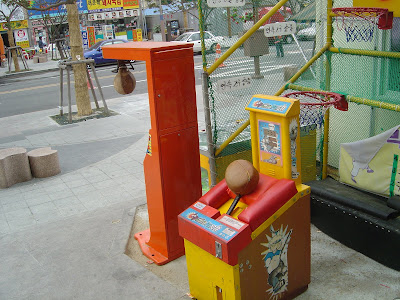 These punching machines are pretty common throughout Korea. The idea is to punch them hard and find out how much stronger you are than your friends. I pass this one on the way to work in the mornings and it plays some pretty funky techno music. It's called 'Health Punch'.
I still don't know why. 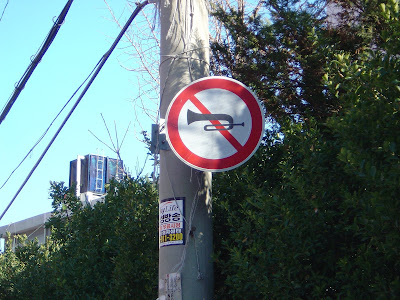 Here's a sign near my house. I guess it means no horn-tooting, but I like to think that it could be any number of other things. Like 'no trombones', 'no music' or 'no cavalry charges'.

So now that I have a new computer, does that mean I'll be blogging more often? Possibly. I guess it really depends on whether I find things interesting enough to share with you all. Maybe I'll post less, but more often. Hmm, food for thought. Cyas!
Posted by Lee Farrand at 2:20 pm