A Wedding in Seoul

A couple of weekends ago, a friend of a friend kindly invited us to their wedding in Seoul. There are two things I like about weddings: Free food and Free alcohol. As my old man used to say "There's no such thing as a free lunch, except for at weddings and various other free-lunch events." 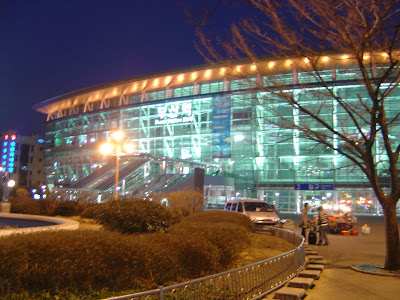 So we ran to Busan station with only a couple of minutes to spare before the train left. Even though there was plenty of time to get there at a decent hour, somehow we found ourselves running for the turnstiles at the last minute. That reminds me of my exams in university, even though I had weeks to study, I always left it to the last minute and found myself cramming the night before thinking 'How did it ever come to this?' 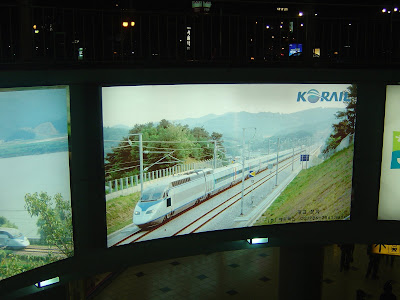 The KTX is a fairly new high speed train that runs from Busan to Seoul in about two and a half hours. Tickets cost about forty five dollars, but can be cheaper if you pool together and make a group booking. Prior to this, the same journey used to take about six hours. 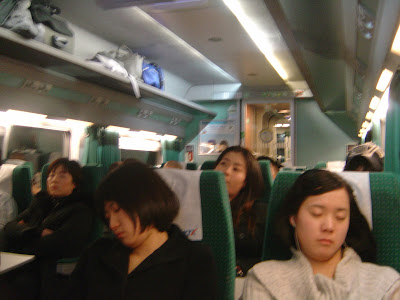 The ride was fairly smooth and the cabins reminded me of an airplane. There are a couple of vending machines onboard and also some train-host-persons (which I believe is the politically correct term) that occasionally push a trolley past with things like green tea and walnut chocolate for sale. It was comfortable enough for the journey, although not a lot of leg space and the chairs don't recline. Kind of like a lecture theatre without a lecturer. Most people fall asleep. 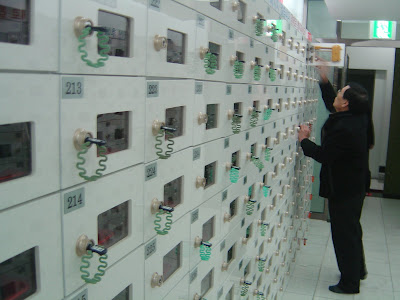 If you're staying overnight in a Korean city, a cheap accommodation option is to sleep at a chimchilbang, which is a public bath house with saunas and showers. You can just sleep on the heated floor with a whole bunch of strangers seemingly from every facet of society. We decided to sleep at one in Seoul and I found it to be very interesting. Let's just say that I've never seen so many naked Korean men in my life. This is a photo from the locker room, I'm afraid you'll have to use your imagination for what the rest of the place looked like. 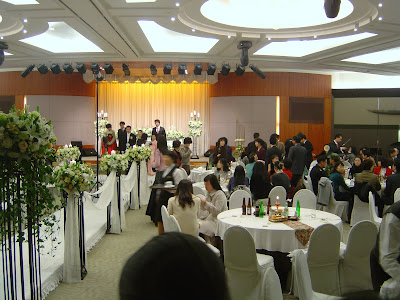 Because there isn't a whole lot of space in big cities like Seoul, a lot of people have their weddings in purpose built wedding halls like this. The wedding entourages are quickly herded in and out in a few hours to make way for the next paying couple. The venue was fairly nice and the food was alright. On the left-hand side of the aisle were the groom's family and on the right were the bride's. 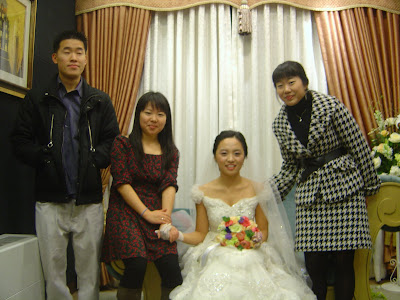 Here's the bride with some friends. We had just arrived at the venue and went into the photo room. Look how natural and relaxed I am in this photo. 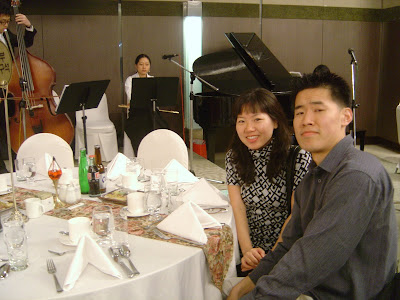 And this is me hanging out with Heather's sister, Emily. Bring on the food I say. 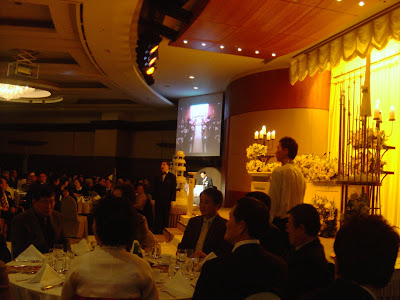 The lights dimmed according to plan and appropriate music emanated from unseen speakers. Then a speech was given by a man who looked wise, but unfortunately I couldn't understand what gems of knowledge he was imparting on us all. My Korean now is nearly as good as a native four year old. Well, a four year old who has a suspiciously large alcohol-related vocabulary. There were many western elements in the ceremony but what struck me was that there was a lot of bowing and no kissing. Also there was no ring-giving part. Maybe the best man forgot to bring them like it happens in the movies. Altogether it was a pleasant and interesting experience. Thanks to Yong-Gyu and Seung-Yon for inviting us, even though that day was the first time I'd ever met them and all I did was consume their consumables. 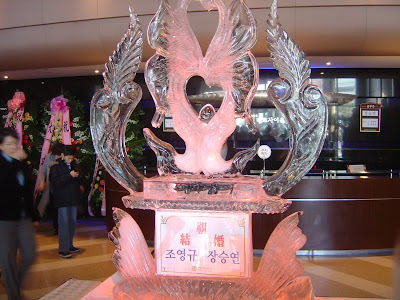 There was a nice ice sculpture in the reception area. The names of the bride and groom are inside the ice. 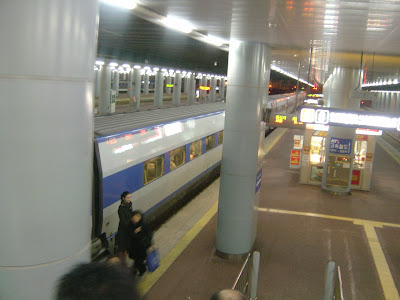 So in less than 24 hours we were on the KTX again and heading back for Busan. I noticed that Seoul was much busier than Busan on the metro, there was a sea of people everywhere. They also seemed to walk a lot faster than I remembered. 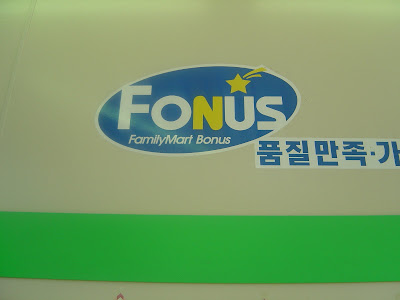 Family-Mart are a chain of convenience stores in Korea where you can buy everything from smoked eggs to pre-warmed coffee in a can. As part of their ingenius customer loyalty program advertised here (which the store workers haven't heard of), you can apparently get a 'Family-Mart Bonus', otherwise known as a Fonus. What a catchy name. 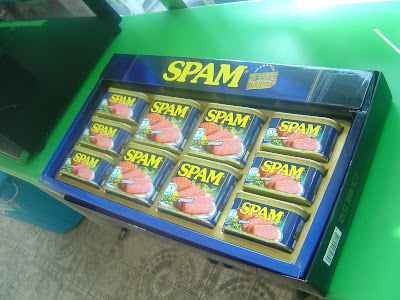 Family-Mart and every other self respecting chain store in Korea stock special gift sets, which are popular for occasions like chuseok and christmas. You can get all sorts of types, from hand cream and toiletries to Spam. In the Spam gift set you get 6 little cans of Spam and 4 big ones. Koreans are pretty crazy about Spam, to the extent where it has spawned a whole supermarket genre of 'fake Spam' brands. Oh, and they eat bread for dessert too. In western restaurants you can order a loaf of bread with a dollop of raspberry icecream on top. 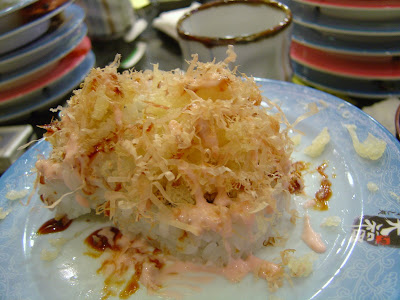 Remember that sushi place we went to last blog post? Well we went back there again because it was so good. Here's a new fusion sushi for you to admire. It's a rice bed with cabbage in it, topped with okonomiyaki sauce, dried fish flakes and ... strawberry mayonnaise. I found it to be a surprisingly inoffensive flavour combination. 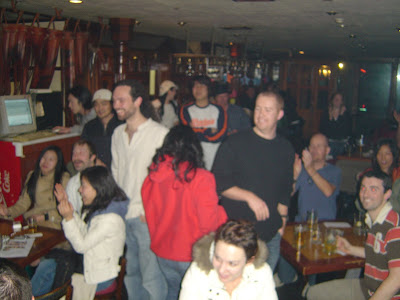 On Sunday nights we've been heading up to Dalmaji hill, an area overlooking Haeundae beach for trivia nights at a local bar. It's run by English teachers and draws a crowd from across the city. Sometimes the questions are a bit shoddy, but most of the time it's a nice way to drink up and end the week. The other week we won first prize, which is always a bottle of tequila. Dee-rishious! (delicious!) 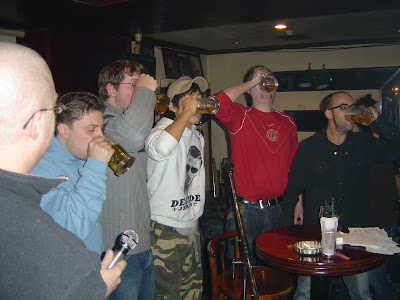 That particular night, one of the bonus points was for a drinking competition (or sculling as we say in Australia). The challenge was to drink half a litre of beer as fast as possible. That guy in the cap is Kyung-Won, Meaghan's boyfriend from our table who won it for us. He can drink really fast, it took him around 3 seconds. 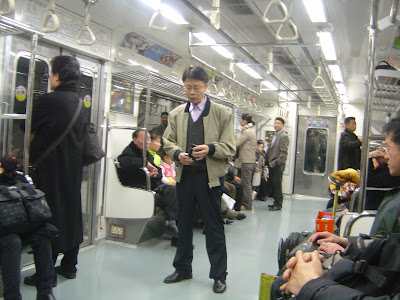 On the subway there are sometimes salespeople selling things like umbrellas, gadgets or stain removers. They always give a quick speech first, sometimes followed by a demonstration and then they move onto the next carriage. I bought an LED torch from this guy, it cost me about $1 and on the packet it says 'easy to use'. For that price, I would hope so. 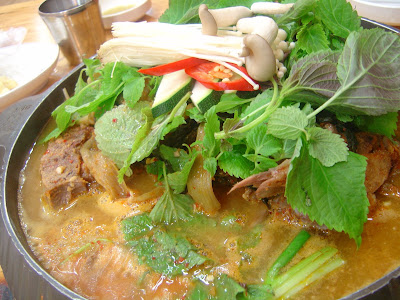 Kamjatang is a pleasingly priced and perfectly presented popular pork and potato uhh ... stew. It cooks at your table with vegetables and various side dishes. There are always a lot of large bones that boil in the soup which make it extra 'hearty'. I remember the old Heinz soups back in Australia used to be called things like 'Hearty Beef Soup'. This is the first time I've ever used that word. Try using it in your vocabulary today. 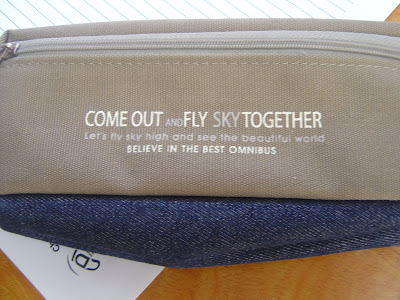 This is one of my younger student's pencil case. 'Believe in the best omnibus' is actually a popular stationery brand here. Whatever it means, it sounds like decent enough advice. 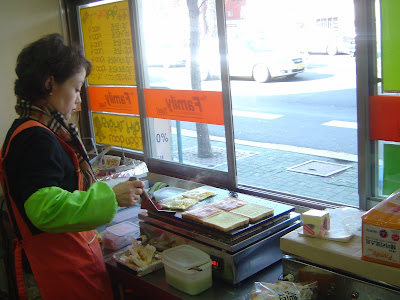 Here's the nice Family Toast lady who works a stone's throw away from our school. Family Toast is a franchise here that sell toasted sandwiches. A hot ham and cheese sandwich will only cost you about a dollar. Quite comforting on these cold winter days. Busan's temperature has dropped to around 3 degrees celsius during the day time. Apparently, if you have an outside tap around your house and there's water stuck inside it, it can freeze and burst the pipe overnight. My friend told me that's why some people leave their outside taps running at night. 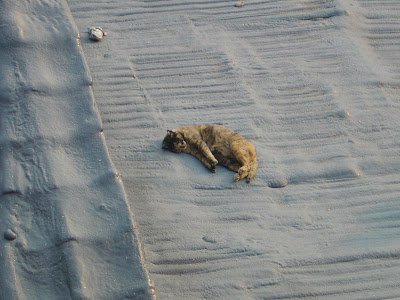 This is a cat that I spotted sleeping on the roof next door from work. Cats and dogs in Korea behave a little differently here. They're usually more scared of humans and it's difficult to get close to them without invoking a fight-or-flight response. 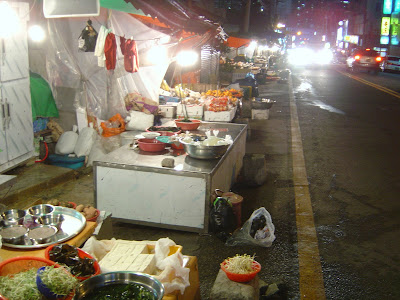 And here's a view down a street close to my house which has a lot of night markets open on weekdays. You can buy things like fruit, vegetables and fish from the lovely ajummas. It's so cold at night that they just put the fish on the tables in the open air without any ice.

Tomorrow is seollal, or lunar new year, which is a big holiday in Korea. For the long weekend I'm off to Japan to catch up with my sister and have a poke around. Should be fun, stay tuned!
Posted by Lee Farrand at 3:31 pm

Man dude I laughed so much with this post! You have a great sense of humor, i'm gonna come back tommorow and read some more hahahah, keep it up~