Me and Buddha's birthday

Well the days are zooming past. I'm coming on to One Year In Korea soon and I must say it's been completely worth it. I've already decided to resign with my current employer and stay on another year. What will I do after that? Who knows. 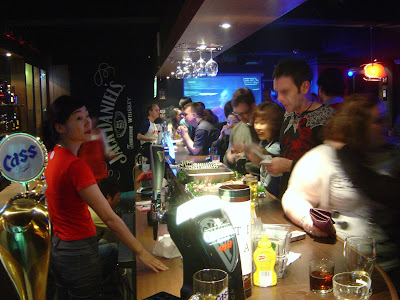 A while back, a new place called the Rock and Roll bar held a 'free all-you-can-drink party". It wasn't long before word passed around the ex-pat community. They may have misjudged their market strategy, because they gave out a few hundred gallons that night and we've never found a reason to go back. 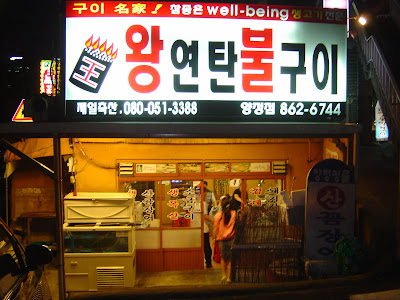 One of our newer teachers, Tammy, has a Korean husband who was a little disgruntled with his old job. So after a suggestion, followed by some negotiations and interviews with the powers that be, he got a job at our company. Bam, just like that. This is his mother's restaurant, where we ate at some time later. At the top of the sign it says 'well-being' which is a huge catch phrase in Korea at the moment. I think it means healthiness. 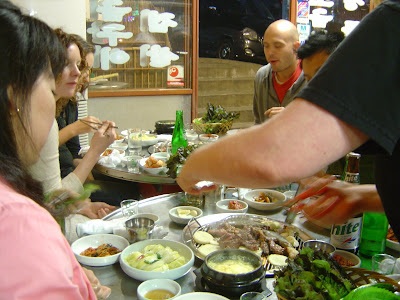 The food was pretty good, prawns, marinated beef and pork on a grill. We drank lots of soju and then went to a karaoke room and sang Metallica songs. 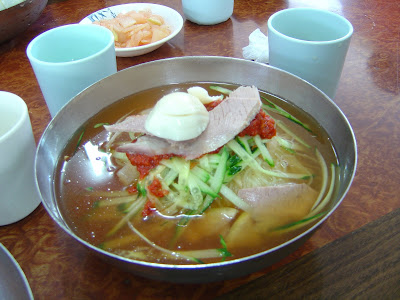 This is mil-myeon, or more specifically Gaya mil-myeon. Gaya is the area we live in, which is particularly famous for this dish. The soup is ice cold and slightly tangy. It's similar to naengmyeon and is just about the only thing that's good to eat on a hot day in Korea. You're supposed to eat the half egg on top first, because the cold noodles are difficult to digest and the egg will prepare your stomach. Why don't they give you a whole egg then? Well, that's because a whole egg is too filling and would spoil your appetite. I learned this from watching Korean TV. 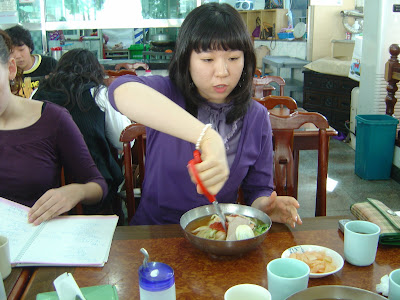 Here's Ji-Hae, cutting up her noodles with scissors. In Korea, it's polite for people to cut up noodles for each other, but I forgot. 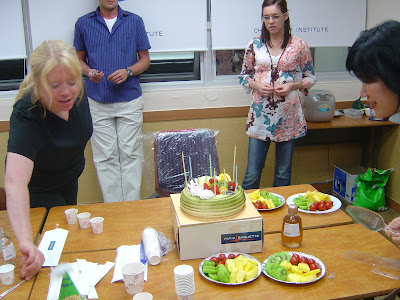 And then on the 23rd of May, it was my birthday. I can't believe I've been sitting on this rock for a quarter of a century. Anyway, this was our little staff celebration. That cake was green-tea flavoured. Koreans also like to eat cherry tomatoes as part of birthday celebrations and you can often find them on top of birthday cakes. And sometimes in these strange, mini-croissant sandwiches with coleslaw that the administration like to buy for us. 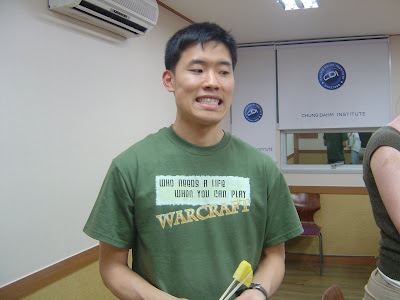 This is the shirt that Jef bought me for my 25th lap of the sun. It says 'Who needs a life when you can play Warcraft'. I've been playing that game a fair bit recently. Currently I have a world-ranking of #820. I think that qualifies me as a nerd.
Oh, and you can also see I'm eating a piece of pineapple with chopsticks. That's completely normal in Korea. The first birthday cake we ate here, we didn't even slice up. We just attacked it with chopsticks all at the same time. 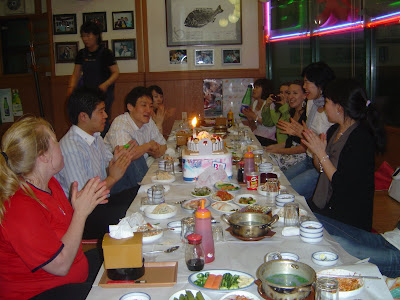 Then on the 24th, it was Brandon's birthday. To celebrate, we drank lots of soju and ate raw fish at Gwangali. 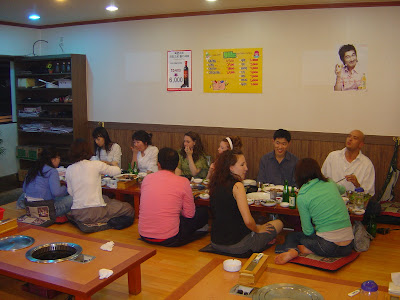 That was very similar to the following day, when we had my other birthday celebration. Except this time we ate pork instead of fish. 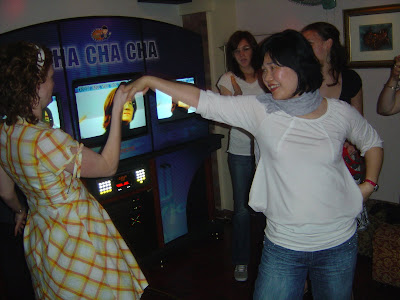 Who's that fine young karaoke dame in the white shirt? Why, our school director of course. Drinking culture in Korea is a little different to Australia. Being publicly inebriated in front of work colleagues isn't considered all that naughty. Unless you wake up next to them or something. 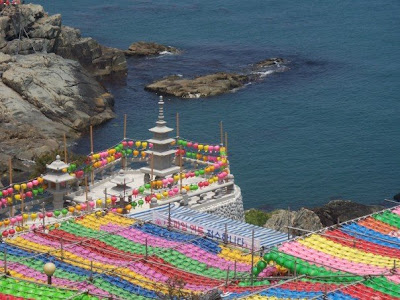 Brandon's birthday was also Buddha's birthday or Bucheon-nim-o-shin-nal (which means 'the day Buddha came'). We went on a day trip down to Yonggungsa Temple which is right by the sea. I forgot my camera on this day, so these pics are from my colleagues. Photo: Jef Robison 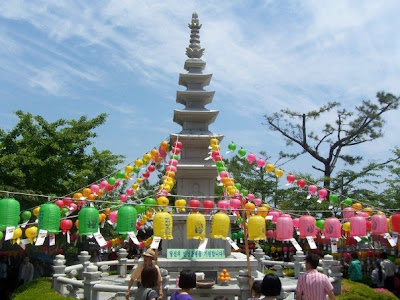 This stone pagoda is one of the central features of the complex. The different tiers represent higher stages of enlightenment. The highest one is samadhi, which is when the mind becomes still but the person remains conscious. It would be nice if there was an easy way to get there quickly. Photo: Jef Robison 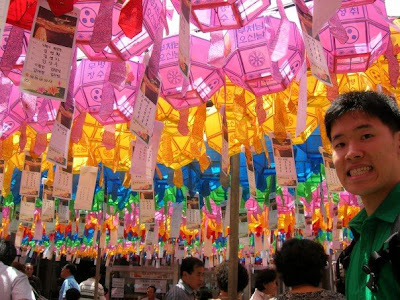 These lanterns were everywhere. Each one has the names of family members attached to it and some wishes for good fortune. They also have light bulbs in them, which would be impressive to see at night, but we always have to work. Photo: Cheri Whitney 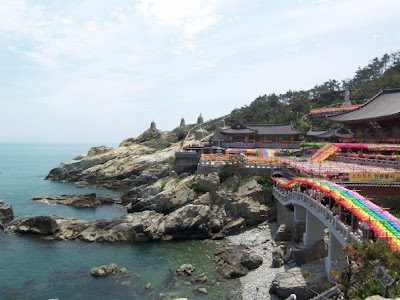 The whole area is very picturesque and interesting. I'd like to come back someday and go for a swim. Photo: Jef Robison 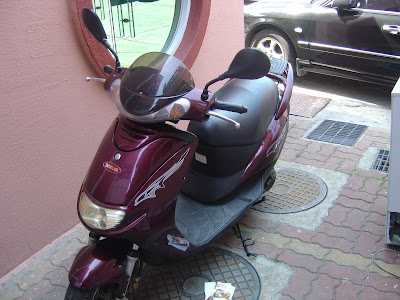 Oh yeah, remember I told you I was getting a scooter? This is it. Tammy's husband Yang-Min bargained it down for me to around $600. It's a 150cc and goes fast enough for my needs. Traffic is pretty scary, so I use it mainly at night time. 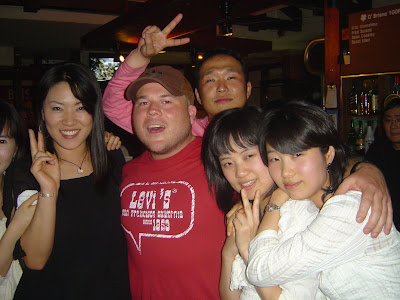 The guy in the red shirt is Chris, who has been working with us for a long time. But his contract expired last term and he's heading off to greener pastures. Someday, it'll be my turn. 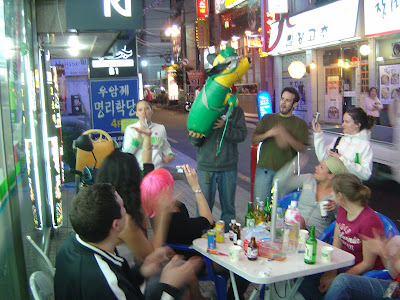 That's all for me again. Hopefully I can start saving money again soon and figure out more of the Korean language. It's a behemoth to learn, so much to remember. Kinda like English.

I leave you with this picture of our drinking mascot, Trevor, who is an inflatable dog. He's been punctured a few times and run over by a car, but each time patched up with electrical tape. Seeya!