Children's Park and a trip to Namhae

As the weather heats up for summer, restaurants like this start becoming popular. This is a queue in front of Gaegeum Milmyeon, a place particularly famous in the city for its milmyeon cold noodle dishes. If you remember the last blog post, we visited a different one called Gaya Milmyeon. The two of them are both within walking distance from my flat. 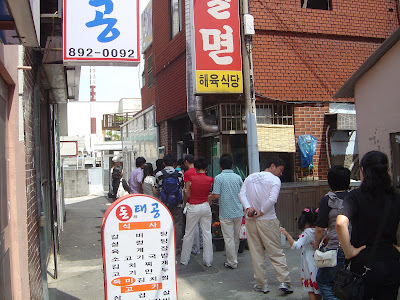 If you wait in line for a while, a man with a microphone will welcome you and ask whether you want soup-milmyeon or soupless-milmyeon. Those are the only two dishes you can choose from. Then you sit down, eat quickly and clear out for the next customers. On hot days, they'll have a queue like this for hours. 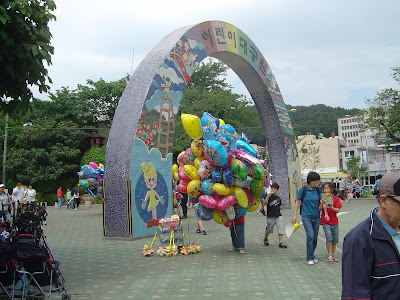 On a weekend off a while ago, we went to Children's Park, a theme-park meets botanical-garden type place. It was built a few decades ago but is still very popular. 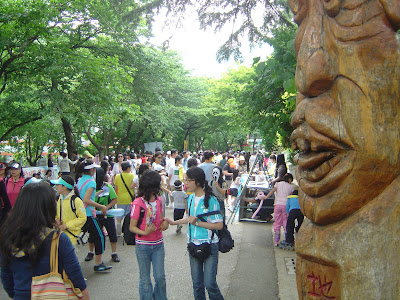 At the welcome gate they have these totems, which were traditionally placed at the entrance to villages. The reason they're so ugly is because they're supposed to scare away bad spirits. They kinda remind me of the Australian Bunyip. 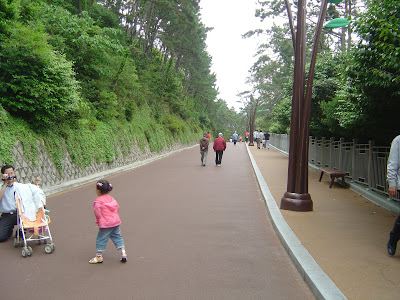 The park is enormous and you could spend hours just walking around in it. Along the way you see little Korean kids laughing, shouting, crying, pointing etc.
Once, when I was on my scooter in my neighbourhood, a little Korean boy ran up to me and fly-swatted me on the arm as I rode past. I think that was his way of saying hello. 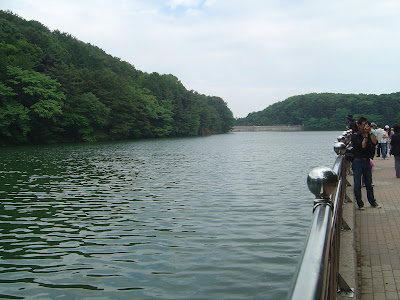 In the centre of the park is a large dam and corresponding lake. It's a very relaxing place to be. I remember once reading a story about a RAF squadron called The Dambusters, that used to specialise in dropping spinning bombs at high speed on lake surfaces. These would then skip across the surface of the water, like a skipping stone, until they reached the dam and exploded. Thinking about that story was pretty much the only thing that tainted the serenity of this place. 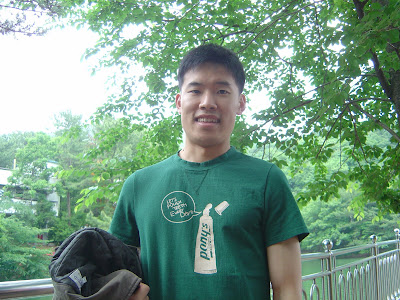 This is a photo that Heather snapped of me, wearing my new shirt. A large interest of mine has been in broken English, or Konglish as they call it here. The design on the shirt has a tube of toothpaste saying 'Let's polish teeth EVERY DAY!'
Now that's some good advice. 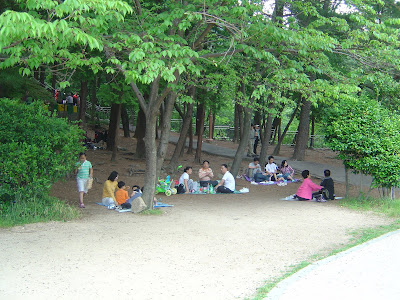 In the various wooded areas of the park, you can see many families picnicking. I'm assuming that's how you spell 'picknicking'. Since coming to Korea, I've noticed my English deteriorate significantly. Sometimes I'll write a word and think, hmm... that doesn't look right, only to find out later that it was the correct spelling.
Anyway from what I can deduce, typical picnic food here includes instant noodles, smoked eggs, dried squid, fruit and soju. 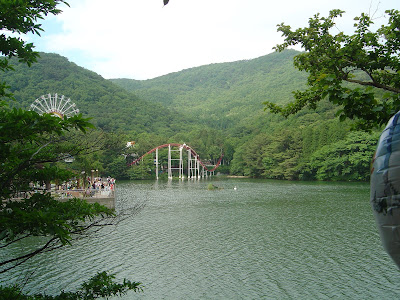 And then, right at the back of the park tucked neatly into a mountain fold is an aging theme park. Hmm... I think that's how you spell 'aging', but that doesn't look right either. 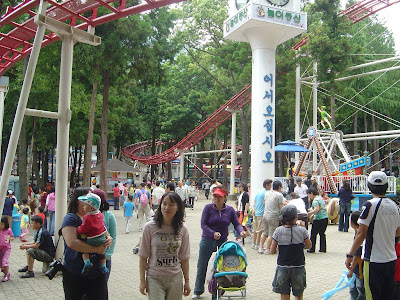 I think it saw its hey-day back in the 70s, but its still doing a good job of keeping the crowds entertained. Entrance is free and most rides only cost a couple of dollars. 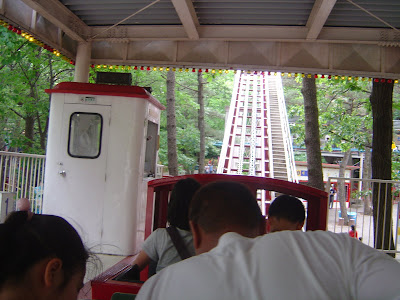 So we had a ride on the roller coaster, which was largely constructed from old wood and the major safety feature was 'holding on tight'. It was scary for those two reasons alone. 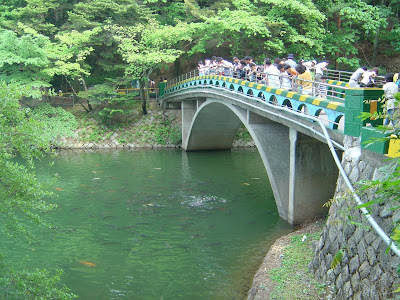 On this bridge, people were dropping pieces of food to feed the carp below. 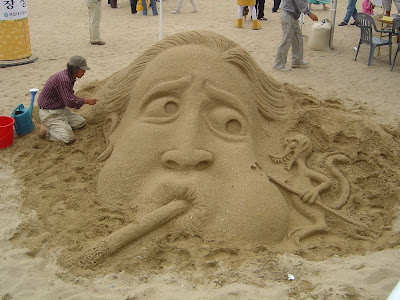 At Haeundae beach they recently had a Sand Festival. The pamphlet advertising it had cartoons with all sorts of fun things happening, so we went down on a Saturday. This sculpture was good, but there weren't many others. 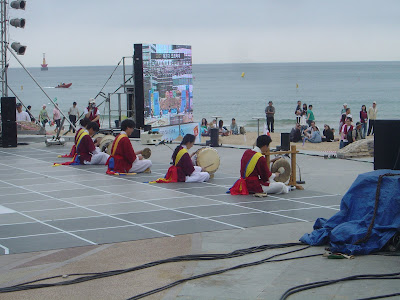 There was a stage with a couple of musical events, but there weren't that many people and there wasn't a lot going on. I heard this was the first Sand Festival they'd put on. Hopefully it will be more blog-worthy next year. 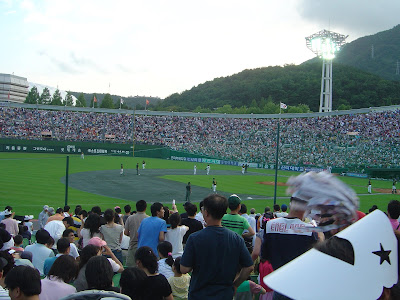 I'd never been a huge fan of baseball, but I was interested to see a game. We went to see the Lotte Giants vs. Hyundai one weekend and it was a lot of fun. Tickets were cheap and the atmosphere was energetic. Towards the end, we weren't really paying attention to the game anymore, just drinking beer and talking.


After the game we went to an apartment in Jangsan for a house party. Some guys started playing music and then this girl started singing. She had a really good voice too. At the beginning of the video, Heather is pouring some soju, as she does so well.


If you remember a while back, I told you about soju pong. The game is played by taking turns at throwing a ping pong ball into the person's cup. When it goes in, they have to drink the beer/soju. It can be played with more or less alcohol per cup, with varying results. 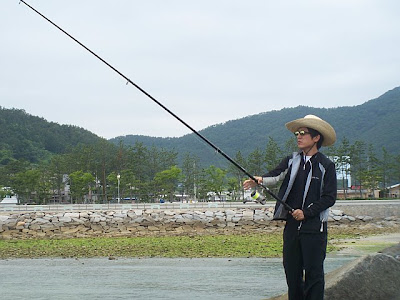 Last weekend, we made a trek down to Namhae. Namhae is an island in Gyeongnam about 3 hours away, connected to the mainland by a bridge. It's a low-populated area with lots of mountains and beaches. I bought my camera along, but somehow forgot my memory stick. So all of the following photos were taken by Jef. 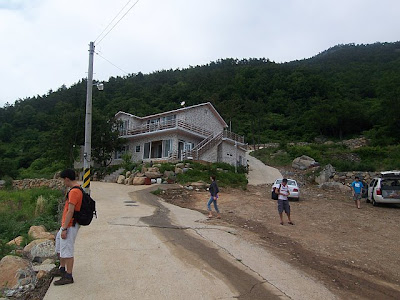 We all rented a room in this holiday home fairly cheaply. It was surrounded by mountains and overlooking a bay. Nice change from the city. 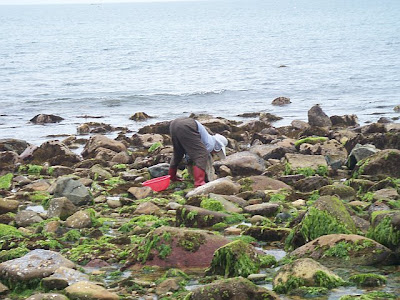 The next day we drove around the island by van. Stopping on various beaches, ajummas gathering seafood were a common sight. I think this particular woman was collecting crabs or shellfish. 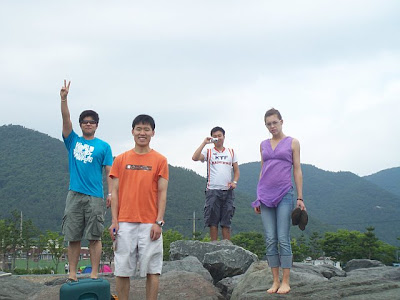 This was taken at SongJong beach, a place refreshingly less crowded than the beaches of Busan. People were fishing from this rock pier and I always like checking to see what they've caught. Then again, I've noticed that most people do. 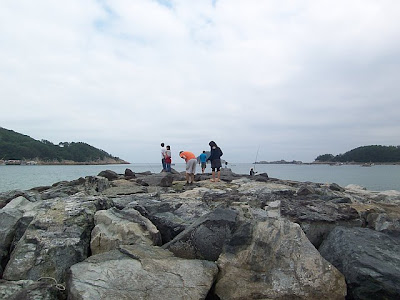 Here's another angle of the pier. In this photo, I'm inspecting some small cricket-like insects that live in between the rocks. Paul told me that when he was little, he got bitten by one. 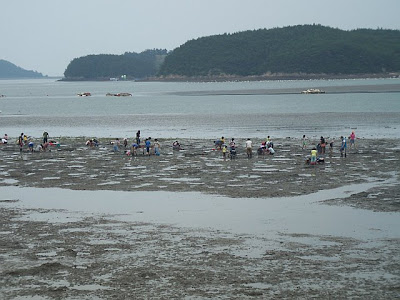 And here's a different 'beach' that we stopped by on the way home. Everyone was out on the mudflats collecting these tiny little yabbies, that looked like fresh water prawns or something. We declined to venture out for fear of soiling our borrowed van. 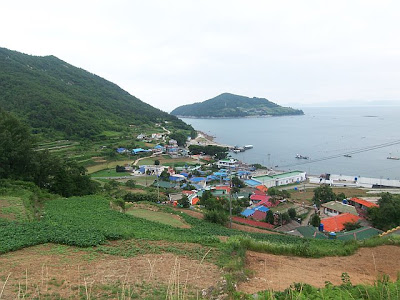 All in all it was an interesting weekend out. A lot of picturesque scenery like this was common. These days I'll often spend weekends just chilling out and doing non-interesting things, so I think it's time I got out more.

Hi , i wud like to go to Namhae for the week end , can u give me the details of room of the holiday home u rent ?
Thanks !