The next gathering is going to be in Vegas in January. Due to the intensive period at work during that time I doubt I'll be able to get time off. But that's not going to stop me trying. Ha. 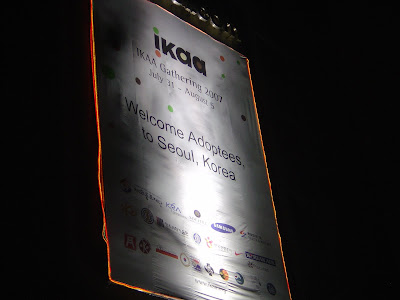 This is the 3 storey high banner that was attached to the wall of the Sofitel throughout our stay. It looked really pretty, but I always wonder what they do with the material after such an event. I reckon it would be good to cut up and make into t-shirts for everybody. 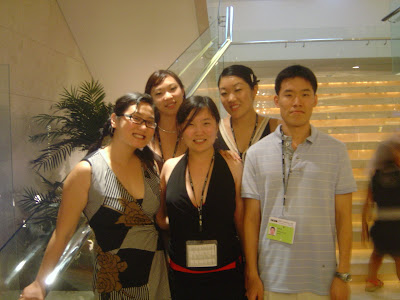 Here are 5 of the 6 Australians in the lobby of the hotel. Another one, Stephanie, was with us at the beginning but had to leave early. I'm in my typical photo posture as usual. 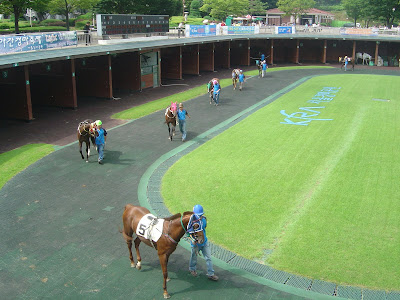 I'd never actually been to a horse race before so I took the opportunity when it arose. On the last Sunday arrangements were made to head down to the racepark as a group, but most people were tired. Only 6 of us ended up making the trek down to the track but it was a good time. 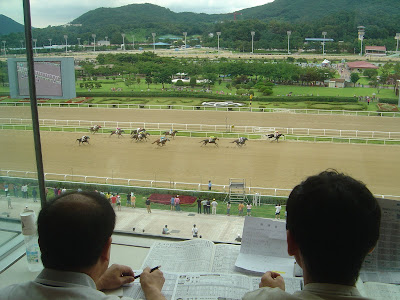 I know very little about horse racing in general, other than that it's an excuse to flog a helpless animal towards a finish line. But that didn't stop me wagering a bet. I picked the best looking horse, which ended up losing. Then I picked the ugliest looking one and that lost as well. Evidently beauty or a lack thereof is not a factor in racing. After that I went back to the hotel. 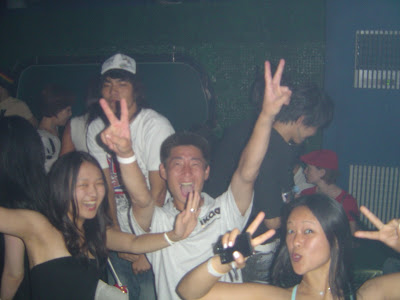 Here we are in Club Air, a place that ended up getting so full of adoptees that the locals ended up leaving and we had it to ourselves. I took this photo early on in the night. I guess some people are just very happy to have their photo taken. 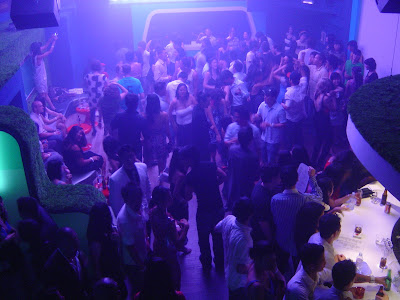 A view from the VIP area looking down on the dancefloor. Pretty much everyone you can see is a friend of a friend. The level of adoptee networking promoted by the various organizations has been very successful. 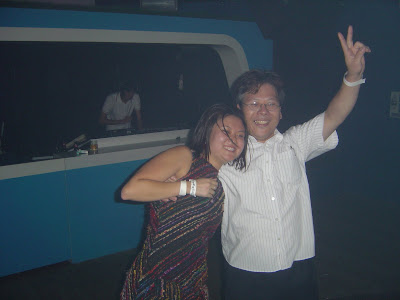 My fellow panelist Robyn, with Dae-won having a good time. I left the place pretty late, and they were still dancing it up. 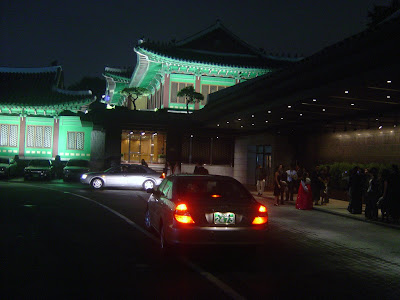 The closing ceremony was held in the Shilla Hotel, probably the most classy venue in Seoul. We dressed up nicely and were pleasantly surprised by the err... classiness of the place. 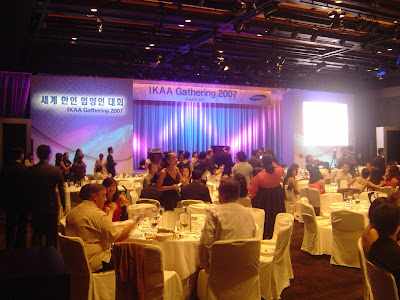 We all took our seats and heard speeches. The vice-president of Samsung, Kwang Sup-Han, was eating with us and footed the bill. At our table we took a few guesses at the price and generally agreed that it would run into the high tens of thousands. It was a very impressive setup. 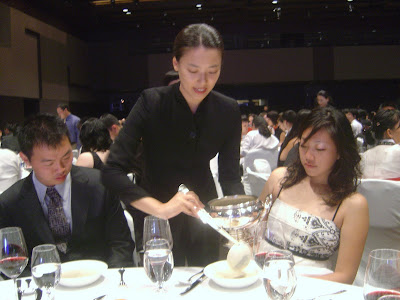 The service was amazing. Wine was unlimited and all the plates were warm at the right time. Most impressively, they had a workforce of about 50 waiters who would stream out quickly and quietly carrying all the dishes at the right time, so nobody was left waiting for their food. Here's one of the waiters that was looking after our table. They came out so quickly they looked like a swarm of bees. 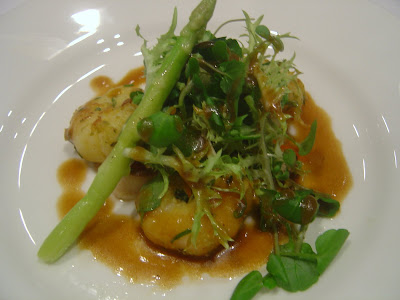 This was the appetizer. It was a seafood salad with wine dressing, but the prawns were some special kind of super tasty prawn that I'd never eaten before. This came after soup and was followed by steak and dessert. Man it was good. 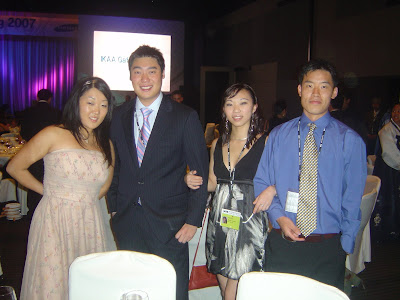 Pia, Steve, Gennai and me. I hadn't worn a tie in so long I'd forgotten how to make the knot. 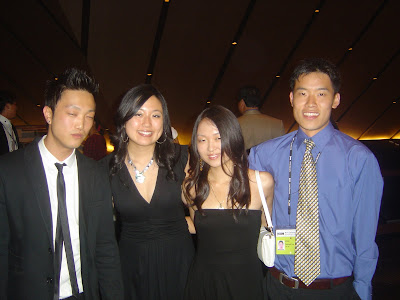 Some of the old characters from Koroot, the lodging house I stayed in last year. I still can't believe it's been a year already. Then again it seems like ages since I left Australia. 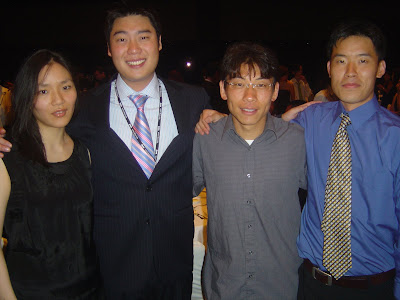 More happy faces. I have no idea when I'll meet up with these people again. Probably at some gathering way in the distant future. 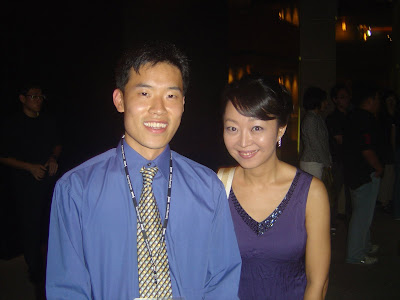 The microphone host for the night was Ahn Jung-hyun, a television personality on Korean TV. She's a managing director of a media firm and hosts a talk show that I watch sometimes. So this was my small brush with fame.


Here's a video of one of the entertainment acts for the night, traditional Korean drummers. There was also other Korean traditional music and a b-boy performance, all of which were top quality. 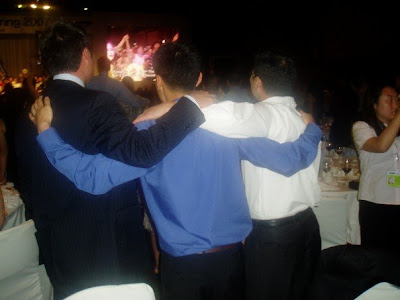 The entertainment was interactive too, with the audience invited to play small drums that were handed out to everyone. In this photo we're singing 'Arirang' together, a traditional Korean folk song. Photo: Courtesy of Her Royal Loveliness, Pia Claire Meehan. 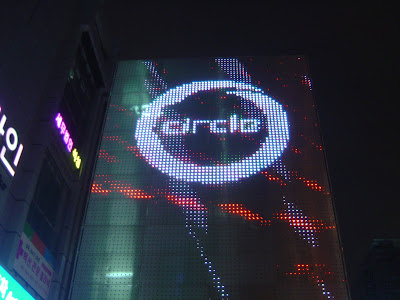 For the final night in Seoul, we had a club booked out for a while. Club circle is one of the more prominent and upmarket watering holes available. This is their animated LED front door sign, a couple of stories tall. 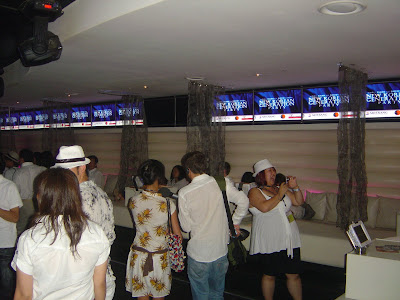 The interior design was original and aesthetically pleasing. White couches lined the outside, with a lot of mingling areas and televisions everywhere. On the couches were monitors displaying slideshows from other events. 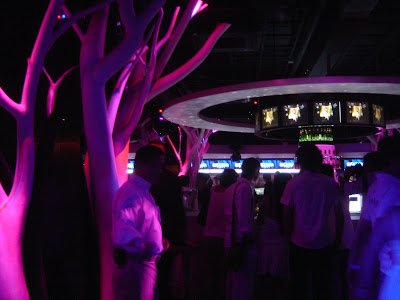 In the middle of Club Circle is the bar area which is a large circle, would you believe. But the coolest thing about it is that the whole outer rim, with tables and all, rotates slowly like a revolving restaurant. So if you sit there, you eventually get to see the whole place from the comfort of your couch. 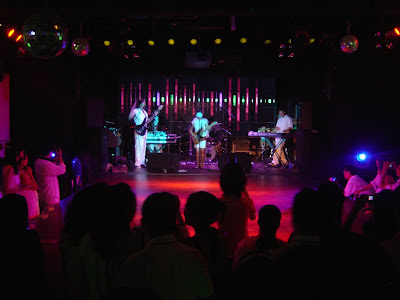 Later that night Mayda came back and gave us another performance. She's a very friendly and down to earth person. I bought one of her CDs afterwards, but it got lost somewhere in the blurry haze that was the rest of the night. 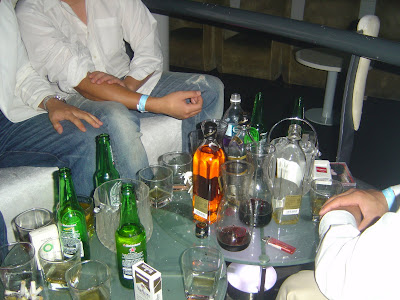 The drinks were a little bit pricey, as could be expected. We all pitched in at our table and those three bottles of JW set us back a mere KW600,000. But it was the last night, after all. Go hard and go home, as we used to say back in Australia. 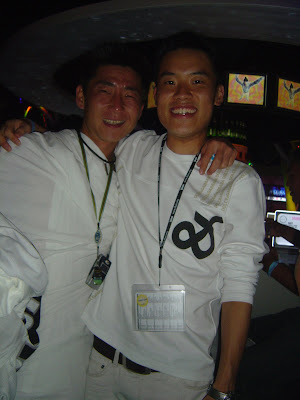 The dress code of the event was all white, to match with the decor of the interior. Halfway through the night one of my very good friends in Korea and an organiser of the gathering, Tae-yang, showed up. He was wearing one of the bedsheets from the hotel, wrapped up into a toga. Awesome. 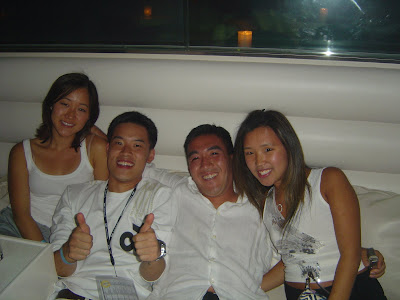 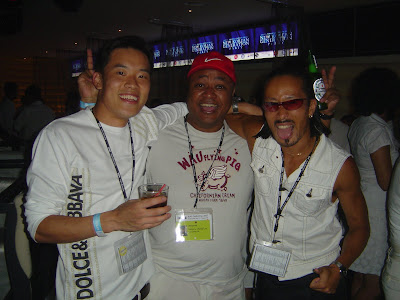 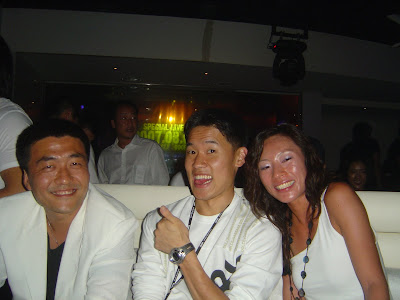 In the photos above are some old friends I caught up with and some friends I have since made. All good people.
The night was a perfect way to wrap up the gathering and I ended up meandering back to my apartment with a glow and a belly full of imported spirits. 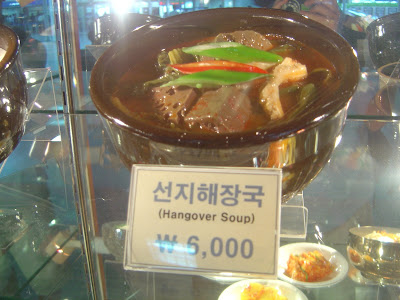 The next day I woke up, checked out and took the KTX train back to good ol' Busan. At Seoul station I found a diner selling this hangover soup, which I promptly ordered. It had some sort of brown jelly stuff in it and tasted alright. On the day I arrived back, I had to teach that afternoon and it went pretty well.

Lee, pretty sure you STOLE that photo of you three guys from the back from ME!
Um.. credit please!
Bahaha

HEYYYYY Lee my good friend - you finally opened up for comments. Im happy to watch and read your pictures and good one of me in the bedsheet!!! Youre definitely one of the ppl I miss from Korea when Im not there and you should go check my blog - I posted already 3 times now!!!

And Im proud to link to your blog from mine as well.

And you can use the pictures of you from my blog freely!!! HEHE