A new year, a new place

A year of living in Korea passed a couple of months ago, but I had spent some of that time in Seoul before I came to the nicer city. Because of that, my one year working contract with the school down here only just expired. Having not had my 'fill' of the country yet, I signed on for another year. 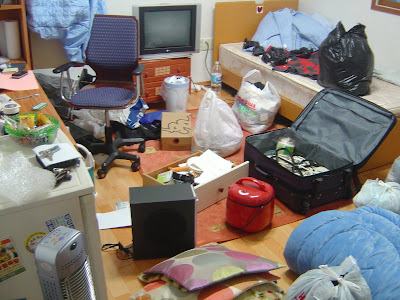 The company I've been working for, the Chungdahm Institute in Busan has been excellent in most areas. I'm glad I signed on with them from the beginning, and I'm happy to be working for them another year. And I'm not just saying that because I know some of the staff read this blog. Ha.
For the new contract, I got a chance to find new accommodation which we found in Seomyeon. The photo above is of my old room in Gaya-dong, with everything in a moderate state of disarray, ready for the big move the following day. The move itself went pretty smoothly. 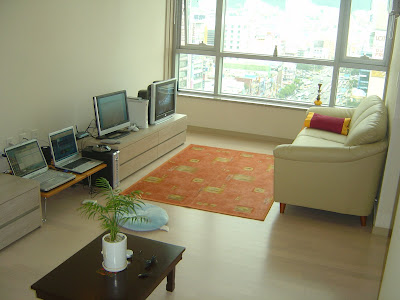 Here's the living room of my new place in the middle of the city. I'm living with a flatmate now, Canadian John from the old branch and things are going as well as I could ask for. We have two bedrooms, a double loft (that could fit another person really) and an intelligent refrigerator that complains if you leave the door open too long. On the table there is my pet plant, Beeblebrox, who I've managed to look after for quite a while now. Usually my plants die inexplicably after a couple of months, but Beeblebrox is a survivor. He's watching me blog right now. 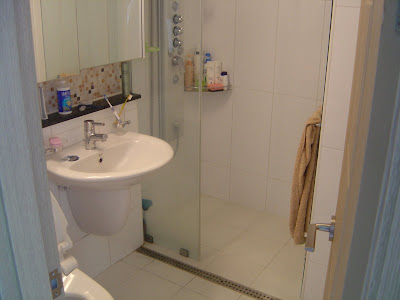 This is the bathroom, with bidet toilet and body shower. Using a bidet seems to make more hygienic sense, but call me old fashioned when I say that nothing's as good as some nice folded toilet paper. The shower is cool as well, it has multiple functions on it including a body shower where it sprays these directed nozzles all over the showeree. Much different from my old one, which sometimes had hot water for more than 3 minutes if I was lucky. 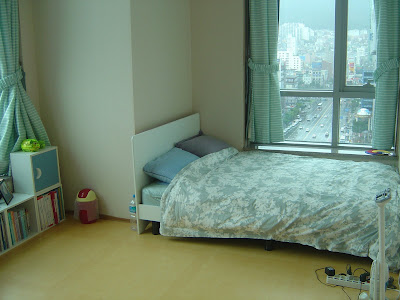 This is my new bedroom, which I've slowly been filling up with stuff. The view at night is quite nice and the windows are soundproofed fairly well. How much are we paying for this place you wonder? It's about AU$700 per month, split with my flatmate. So less than $100 dollars per week each. That's the good thing about living in Busan vs Seoul, accommodation and things in general are cheaper. The downside was that there was a heavy key-money (similar to bond money back home) of about AU$23,000. Our company paid half of it for us. 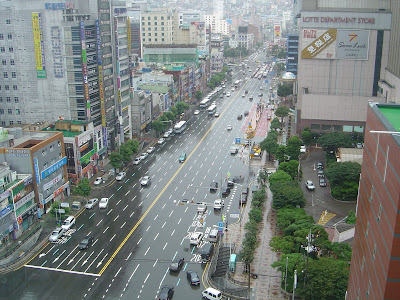 This is the view from the living room. Seomyeon is probably the busiest area of Busan, because it's a shopping district centered on a subway interchange point. And yes, right next door to us is the 7-luck casino. Most casinos in Korea are only open to foreigners, and all food and alcohol is free. If you use the freebies without playing too much though, you do get politely asked to leave and never come back. 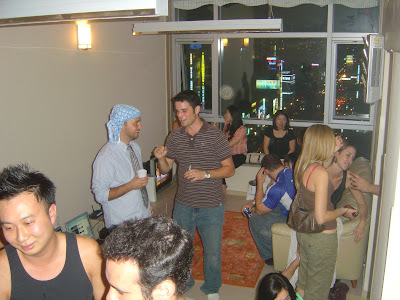 Soon after moving into our new place, we played hosts for Eric's birthday party. There were lots of people drinking and talking and then we went down to the beach. It went pretty well. 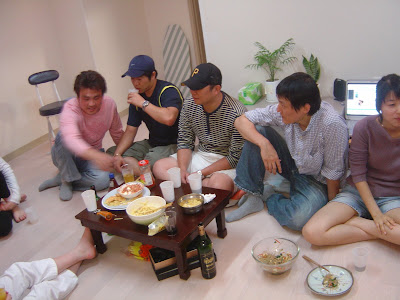 Then, because the timing went a bit funny, our housewarming party was the following weekend. We invited some staff members and I cooked some food. Typical conversations at events like these will be half in Korean and half in English. 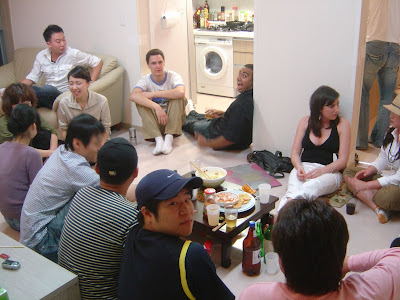 Looking back at us there, in the hat, is Paul. He often drinks a lot and forgets what happened the next day. Sometimes I forget too. It's all a part of living in Korea. 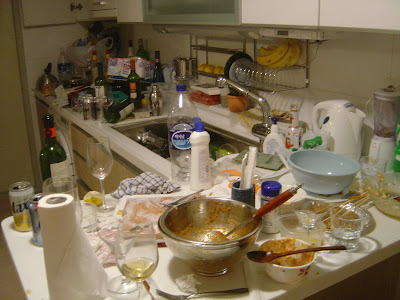 Living downstairs are our co-workers, Jef and Elissa. They have the identical apartment to us, just seven floors down. This photo is from the aftermath of their housewarming. 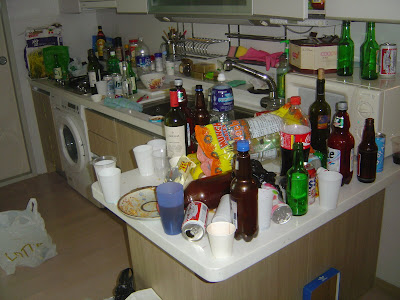 And this is the aftermath of Eric's birthday in our place. You may note distinct similarities and differences between the two. 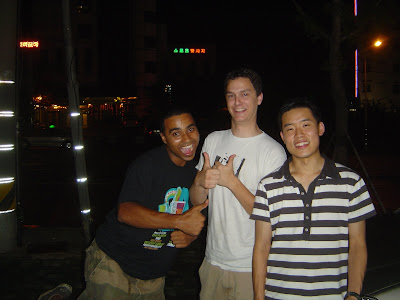 For my new contract I got a promotion to a more supervisory role, where I watch CCTV videos of newer teachers. These are the first two new teachers at the Saha branch, John and Logan. As you can see they are quite happy chaps. Are they like that 24 hours a day?
Well, yes. 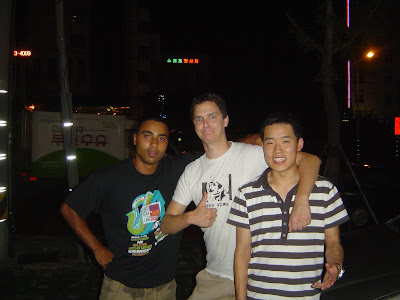 Here's another shot of them I had to include because Logan's face is rather entertaining. He belongs in a beer commercial. 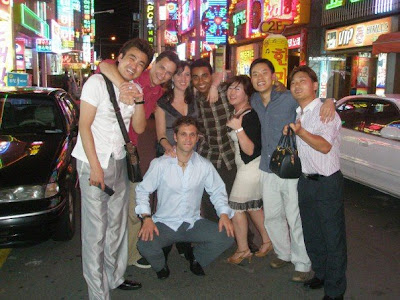 And here are the other staff from the new branch on a night out in the neighbourhood. From left to right is Ken, Logan, Michelle, John, Christine, Me, Yang-min and squatting is Jordan. Just like it was at the old branch, we are all fairly easy-going and get along rather splendidly. 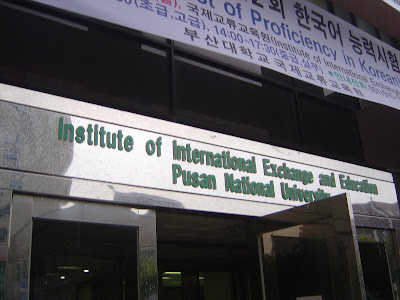 So anyway I decided that this new contract year would be a more productive one. I enrolled in Pusan National University for Korean language classes in the mornings. Right now they're running at 3 hours per day, 6 days per week and I haven't missed a class since I started 3 weeks ago. My Korean is fairly shoddy really, when I consider the time I've spent here. It's difficult to pick up a language if most of your co-workers and friends are English speakers and your job is an English teacher. 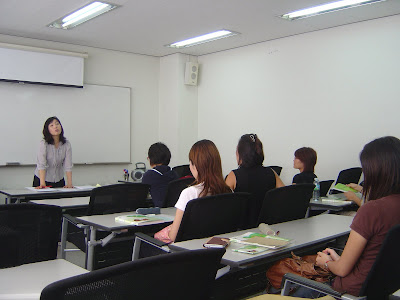 I took this photo at the beginning of the first day of class. The teacher is really nice and every lesson is taught in Korean. I'm actually the only westerner in my class, the others are Chinese, Japanese, Kazhakistani, Sri Lankan and Russian students. 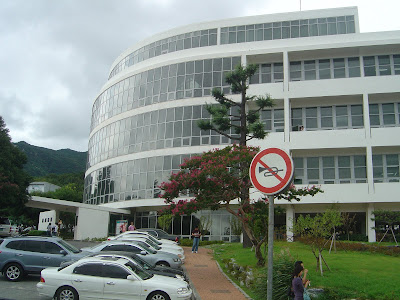 Pusan National University is supposedly the best institution outside of Seoul. It's a nice campus with the mountains in the background and cheap food. Lunch is AU$1.50. It's nice to get back into uni life again too. 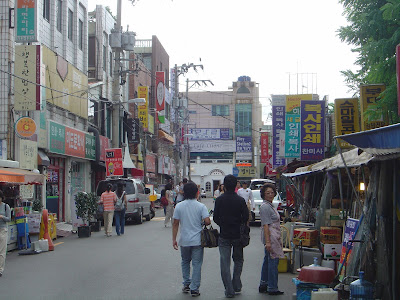 Between the subway and the campus is the PNU area, which is typical of the surroundings of any large Korean university. There are a lot of bars, karaoke rooms and restaurants tailored for a younger market. I walk through the area most days but don't have much time to enjoy it. Typically I'll wake up at 8:30am, eat brekky, travel to uni, take classes from 10am until 1pm, eat lunch and travel to work which I start around 2:30pm and finish at 10:30pm. Between uni and work there are 26 subway stops. So there's not much time for anything else during the week. But I like busy schedules, the same way I did in Australia. They keep me occupied. 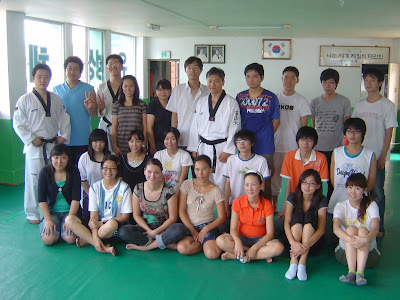 Last Friday the Korean school took us for an excursion to see a Taekwondo instructor. We stretched, ran around, kicked the air and had some fun. The instructor was really friendly too, he told us that if we're learning Korean, we can come to his classes for free. Unfortuneately I don't have the time. 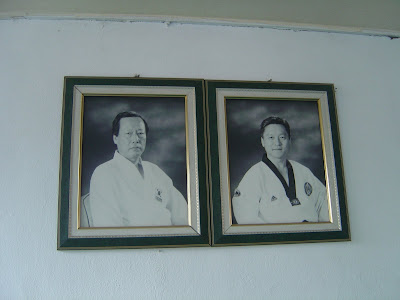 That's a picture of him there on the right. He's an 8th dan black belt instructor, which is quite high. On the left is his old teacher. Imagine if that guy was your father-in-law. Yikes. 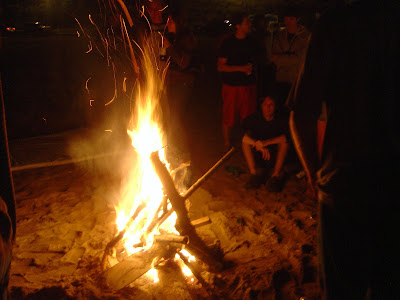 And here's a picture of a fire we started at the last beach party of the summer. A bunch of us gathered at Gwangan beach to bid farewell to the warmer nights. Robyn Schultz, my fellow panelist from Seoul came down that night. Unfortunately we didn't take a picture together though. A big hello to everyone up in Seoul, you guys should come down here more often.

Anyway that's it for me! This weekend is Chuseok, which is kinda like Korean thanksgiving. So we get a nice four day weekend and time to relax.