Last weekend Heather's older sister got married. Heather has three sisters and one younger brother. I had been to a wedding in Korea before, but this time I knew who was getting married so it was a different feeling. 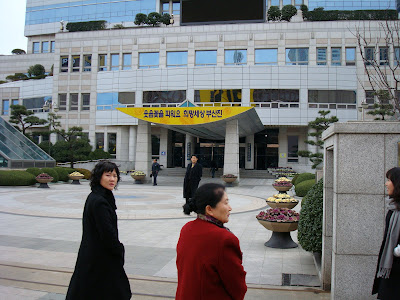 Most people in Korea get married in special wedding halls which are sometimes built into council office buildings. Heather's sister chose the Busanjin council office which was rather convenient because it's only five minutes taxi from my apartment. I turned up on the Sunday morning, eager for the day's events to unfold. 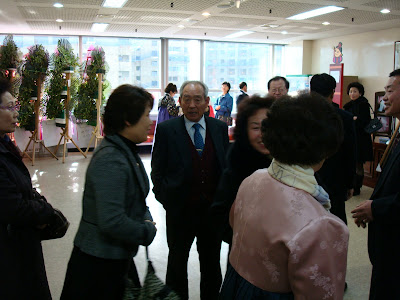 Relatives came from all over Korea and there was a lot of catch-up talk and hugging going on. Some of them tried to talk to me, but older Koreans tend to have very strong accents that I have difficulty understanding. Heather's auntie told us that it was our turn to get married next. 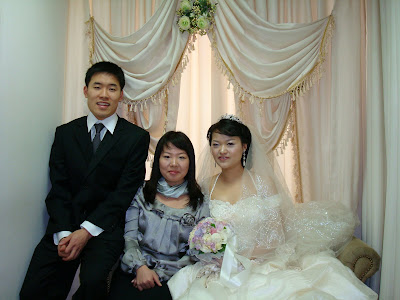 Here I am in my new suit with Heather and the bride. The bride was very pretty and seemed relaxed throughout the day. This was the photo room, where relatives came to have their photos taken with the lucky couple. I stayed around and took some photos with my new camera. 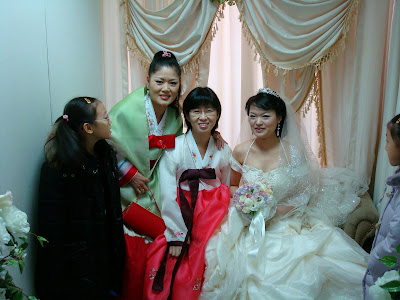 A lot of the relatives wore traditional Korean hanboks for the occasion. Hanboks can get very expensive (hundreds of dollars), but they always look nice. 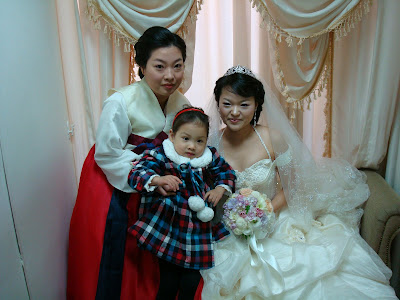 Here's the bride with her older sister who is already married and has a daughter. Her daughter is the first grandchild in the family and is very cute. She gave me a kiss on the cheek when she first met me, but she doesn't speak any English. 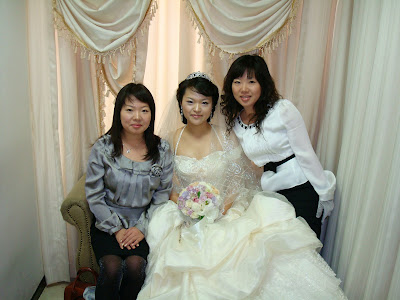 The bride with her two twin sisters, Heather and Emily. The older the twins get, the more they look different from each other. I remember I thought they looked identical, but now I can tell in an instant. On the phone though, their voices sound exactly alike. They like to trick me from time to time. Very mischievious. 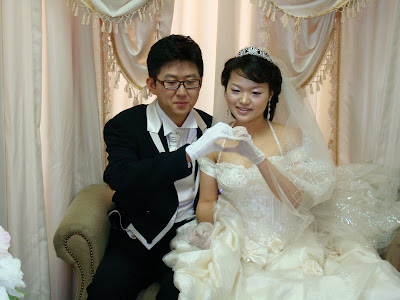 The bride and groom forming a loveheart with their hands. Koreans like to form lovehearts with their arms, especially on TV. A common one is when you put your arms over your head to form the top 'M' and cross your legs while standing up. Maybe I'll show you sometime.


Here's a video I made while in the photo room. The bride was receiving lessons on how to bow for the parents. 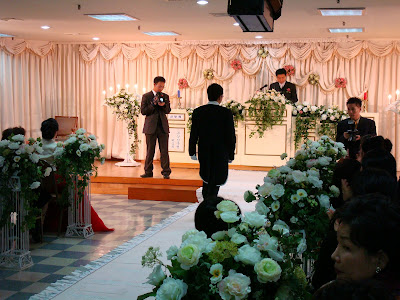 The wedding hall itself was nicely decorated, and special wedding assistants were running around making sure that everything was running the way it should and that everyone knew what they were supposed to do. 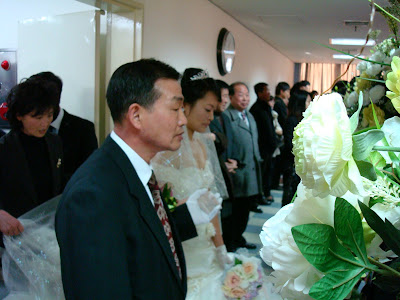 Closest to the camera is the father of the bride. This was taken right before the father took the bride up to get married. It was a slightly surreal moment. Behind the bride you can see one of the assistants, who was busy making sure that no wardrobe malfunctions would occur while the bride was walking. Luckily, everything went smoothly. 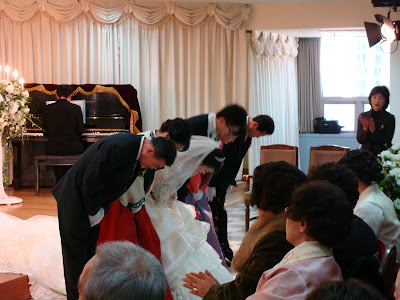 The ceremony itself lasted about an hour. Someone made a long speech and a lady sang a traditional Korean pansori song. There was no exchanging of rings or kissing on stage, as with the last wedding I went to. Instead, the bride and groom gave deep bows to their parents and to all of the relatives. 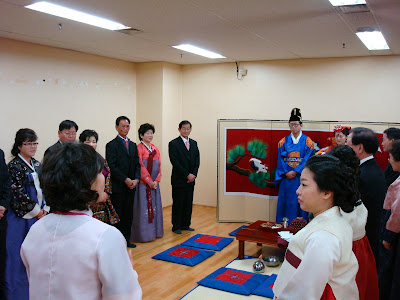 The wedding was split into two halves, the 'western style' half and the Korean traditional half which came later. The Korean style wedding was held in the basement of the building. Because of the high demand for wedding venues in Korea, there were at least 3 other weddings happening simultaneously on different floors in the building. In our room there was a wedding right before we started and there was a new couple waiting before we had finished. 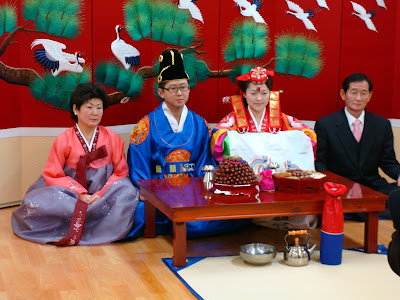 For the Korean traditional wedding, most of the women wore hanboks, while the men wore suits. Only close family attends this part, while the rest go and start eating, but I was allowed in to take photos. That was very nice of them. 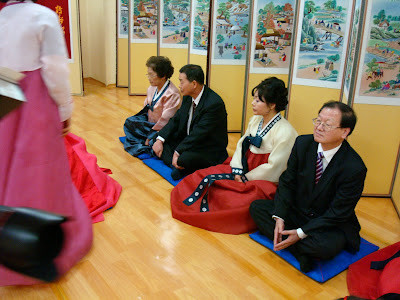 The bride's family line up on one side of the room and the groom's side opposite. The parent's of the bride and groom take turns to give advice to the new couple. I couldn't understand all of it, but I did hear the mother say "Don't fight with each other".
That's also what I tell my students during break time. 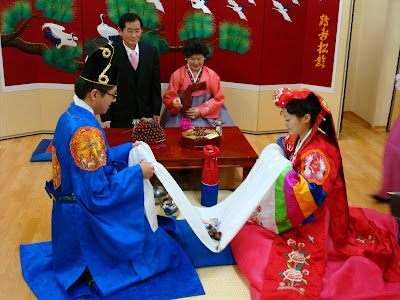 As part of the ceremony, the parents throw plums onto a cloth held by the couple. I'm not exactly sure what it symbolises, but the parents were very accurate with their shots. Maybe they used to play marbles when they were younger. 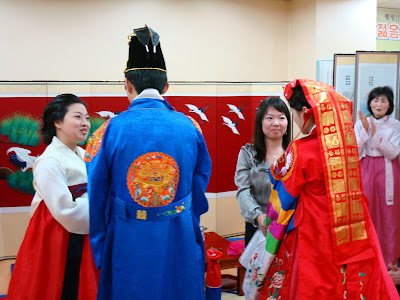 Then the family gets a chance to congratulate them and the official wedding ceremony is over. 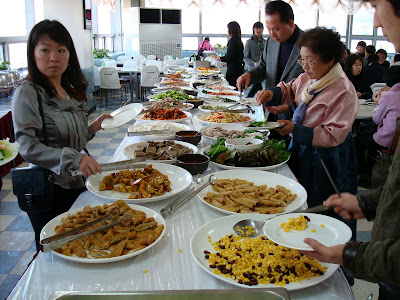 Because of the high volume of weddings everyday, the catering is done together and guests from different weddings all dine in the same hall. A catering team works non-stop to feed the guests coming from anywhere between 10 to 20 weddings per day. 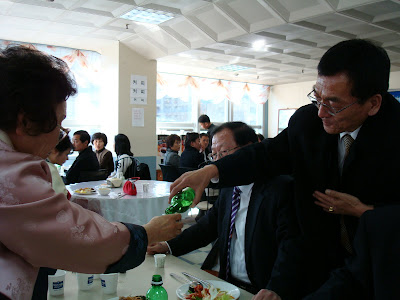 And then there's always time for a celebratory shot of soju between older relatives. These days I'm getting used to the taste of soju and can happily finish a bottle over dinner. It still doesn't taste particularly wonderful, but it's strong, very cheap and Koreans love it. If you buy it in large quantities, it approaches the price of $1 per litre. 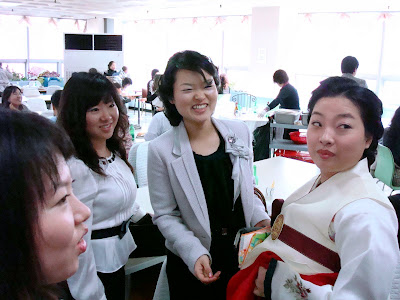 Here's the bride after the ceremony with her sisters. She was very happy with how the wedding went and both the bride and groom looked very good together. The bride has a phD in linguistics and works on computer programs that can talk. 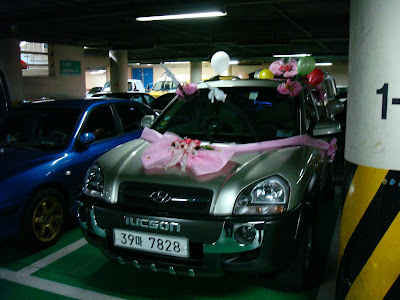 Friends of the groom had decorated the car appropriately while the ceremony was on. The bride and groom were then whisked off to a hotel and will be having their honeymoon in Bali.
I wish them all the best in life. 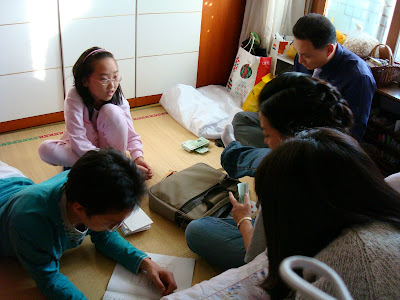 In Korea, relatives customarily give envelopes of money to the parents of the couple. This money is used to pay for the wedding and other expenses. Even some distant relatives who don't know the bride and groom show up and contribute. Each envelope has between $30 to $500 in it and because so many relatives come, it adds up to be a lot.

After the wedding we went back to Heather's house where an interesting ritual took place. We went into the bedroom and the sisters and brother (that's the younger brother in the green) started to tally up all the money. One sister counted the money, another double checked it and a cousin checked the envelope was completely empty before the brother wrote down the result in a special book. This production line was very efficient and had all the envelopes counted up within an hour. The book had a list of all the relatives and how much money they paid. What is then expected is that whenever any of them have children who are getting married, the same amount of money is contributed back. That way wedding costs are absorbed by the family and don't become a financial burden. 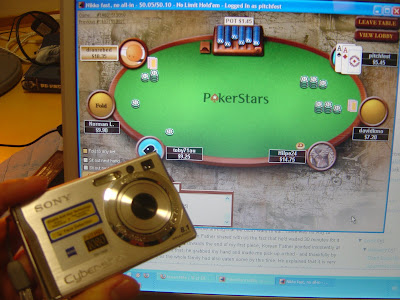 Here's a photo of my new camera, which I took with my old camera. My new one has HD, face recognition and anti-blur. It's also smaller and has a lot more memory, so hopefully it will contribute to the blog in good ways.
In the background one of my online poker games is running. I play Texas Hold'em these days as a way to wind down from teaching. If you look closely you can see I've got pocket aces. I ended up winning that hand. 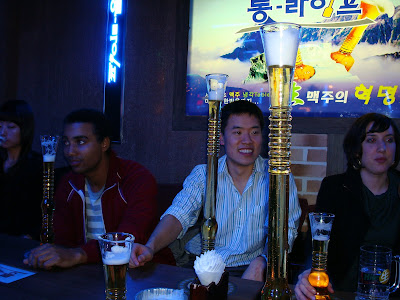 For the month of January we had to teach morning intensive classes at work. It happens for two months of the year and means we have to teach 3 hour morning classes along with the regular schedule. We get paid more for it, but it does make you tired. The intensive period just finished, so we went out drinking at a bar to celebrate. This particular bar in Hadan has a variety of tall ornate glasses to drink from. They're named Jacks, Queens, Kings and Aces, with Aces being the tallest. 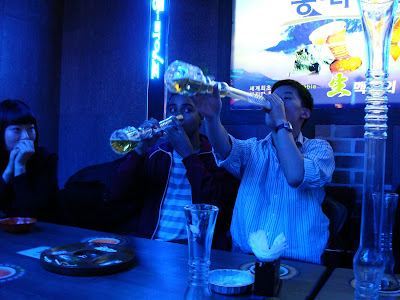 Here's me finishing my Ace. It can be a little tricky at first because the beer takes a while to reach the end. 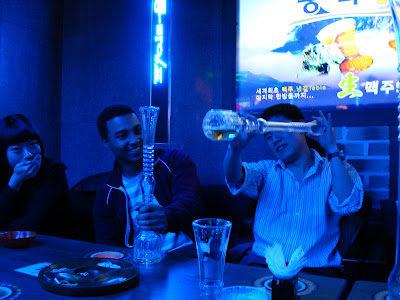 I ended up spilling the last little bit in the glass, because someone made me laugh. Apparently the bar only has three Ace glasses remaining, because patrons have managed to break all the rest. 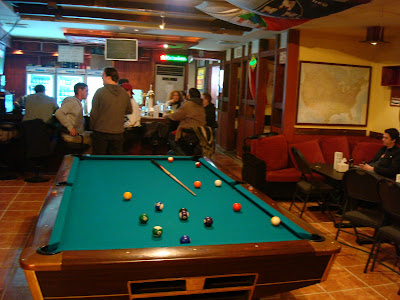 Speaking of bars, the O'Brien's bar near Seomyeon has just finished refurbishment. They knocked out the old serving area and moved it into the corner. Then they retiled, repainted and put in some new furniture. The result is a much nicer venue with more space and an airy feeling. Recently we spent Australia Day there and enjoyed homemade pies and VB beer. Meat pies are one thing I miss about Australia. Another thing is good Vietnamese food. Mmmm. 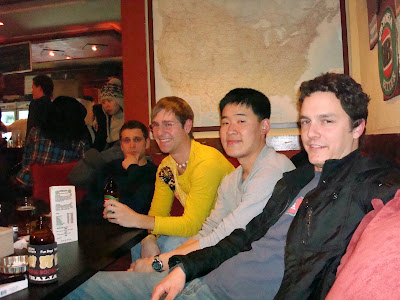 Our pleasant smiles in this photo are due to the new decor of which we unanimously approved. We stayed around for a while and then I ended up eating late night intestines with Yang-min. Back in Australia, late night food would normally be a meat pie from the service station, but in Korea it's intestines.

For the next blog post we're off to Beijing for Lunar New Year. It will be my first time in China and I'm pretty excited. Stay tuned!
Posted by Lee Farrand at 2:08 pm

I kinda stumbled into your blog thru some one 's blog.

I have been wantin to visit Korea for some time but time n $$ just doesnt go well..

Thru your blog, i got to know more abt Korea esp on alot of food i havent heard b4! The best part its all in english! Woot!

Will definitely b stalkin your blog more often.. hopefully i can make my way to Korea by this year for hols..

You camera looks exactly as mine! :-D

gee..lucky you. I didn't make it for my gf's wedding few yrs back but she sent me her wedding video.
^_^