We just got back from Beijing on Monday and it was a refreshing and fascinating escape from the sanctuary that has become Korea. I feel completely comfortable and at home in this country now, but it certainly is a nice thing to travel elsewhere for a while. 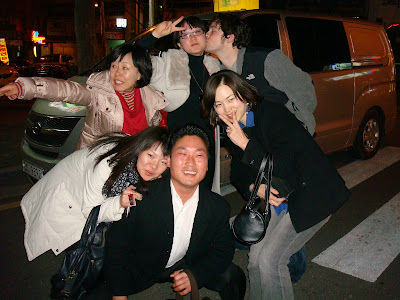 Because it will take me a while to organise the Beijing photos into a coherent narrative, I thought it timely to put up photos for this mini-post. These are from the weekend before we went to China, when we went out in Hwamyeong for dinner and drinks. I don't work for the Hwamyeong branch but Heather does, so sometimes I get to tag along and absorb more than my fair share of their merriment. In this photo are some of the Hwamyeong staff, slightly tipsy after a long dinner and eager to find ii-cha (the Korean word for 'any second establishment to drink at after finishing dinner'). 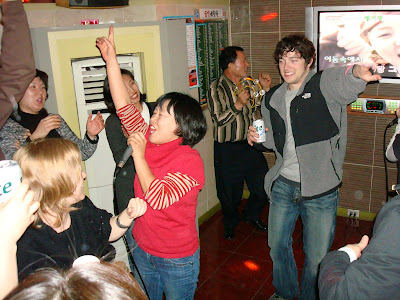 Ii-cha turned out to be a karaoke room. Here food and wine flowed freely and all who were present imbibed dubious quantities while others serenaded dancing co-workers. 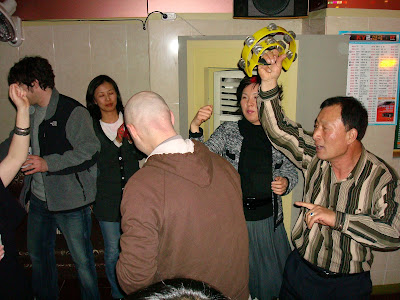 That guy with the tambourine is actually a bus driver for the school who became very jovial indeed. He stood up in the middle of dinner and announced to us "I driving Bus Number 2. Berry goot! Sankyou."
We finished up in the wee hours of the morning and I ended up hitting the sack around 5:30am. 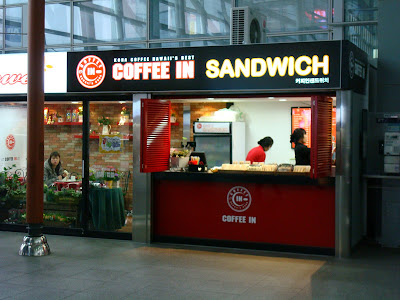 That was well planned because the following day I had to get up at 7:30am to get the train to Seoul. At the train station I was feeling a little snoozy, but I still couldn't help noticing the name of this coffee and sandwich shop. I like coffee and I like sandwiches, but coffee in sandwich? What an amazing idea. 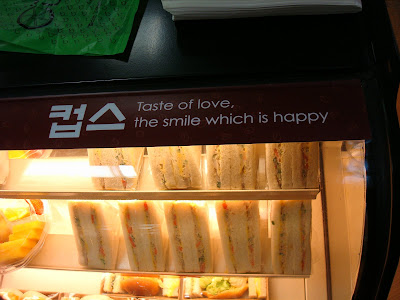 We walked into the train station, and with sandwiches on my mind I had to buy one. This thoughtful pearl of wisdom greeted me at the counter of another shop.

I chewed my sandwich a little more thoughtfully after reading that. 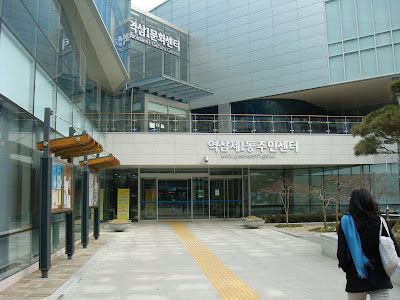 The reason we went to Seoul was for leadership training. The company paid for us to go up there and participate in a workshop at the Yeoksam Cultural Centre. We arrived around midday and had a quick lunch before meandering in. 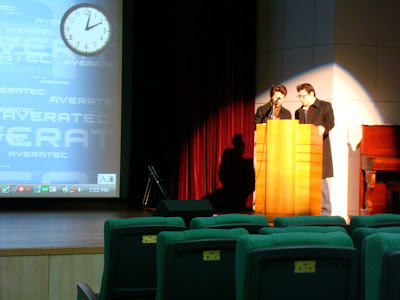 The lecture theatre reminded me a little of my days at university. The presentations weren't too bad, a lot of things were fairly common knowledge but it wasn't a waste of time.
I met up with Ben, who you may possibly remember as my room mate in Seoul from Canada, who I lived with for a while during training. That was a long time ago. He's living in Daejeon now and engaged to a Korean woman. 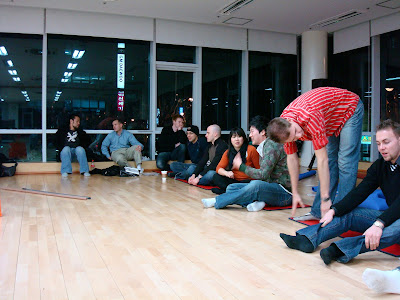 After dinner we had optional team-building exercises which we were a little apprehensive of, especially when we had to take off our shoes. They actually turned out to be the highlight of the trip (as well as me winning $10 at the casino later that night, hooray). 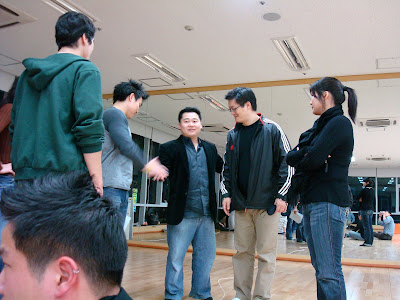 These were the people running the show, various CDI workers from Seoul who each had a different challenge for us to complete as a team. We, the teams, had come from all across the country even as far as Jeju Island. 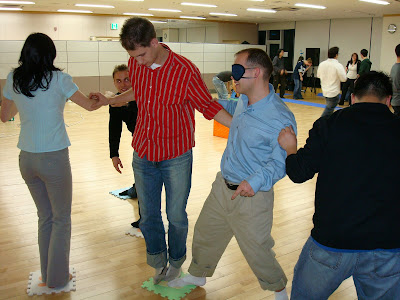 Before long we were blindfolded and frantically yelling orders to each other. In this exercise we had to cross an 'acid river' by stepping on tiles that could mysteriously wash away if no one was standing on them. Four out of seven of our team members were blindfolded which increased the difficulty by an order of magnitude. We passed.


This video is from a different challenge called Minefield. The mines consisted of sticky pieces that had to be avoided. The difficulty lay in that one person outside the minefield had to tell two others who were blindfolded how to step across the area. It was also a race, with both teams starting at opposite ends, resulting in an inevitable collision in the middle. The first team to cross the field received 3 points, but there was minus 1 point for every mine stepped on. 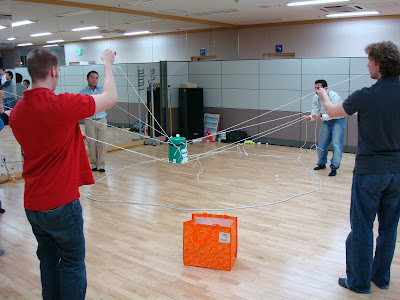 Here's the solution to a challenge called Toxic Waste, in which the teams had to dispose the contents of the green bucket into the orange bag while keeping well away from it. The only materials available were some strings and a piece of rubber. Good fun.
I came back to Busan by train the following day and left for Beijing three days later.

The next few posts will be all about Beijing, which is an enormous city of skyscrapers and history. I'll pop them out in succession as time permits.