Beijing Part I - A City of Skyscrapers

I had been wanting to visit China for a long time and the chance finally arrived when we had a long weekend last week. We toured at our own pace and enjoyed it a lot. Although we were only there for 3 nights, we fit a lot of things in and came back feeling very good about it. 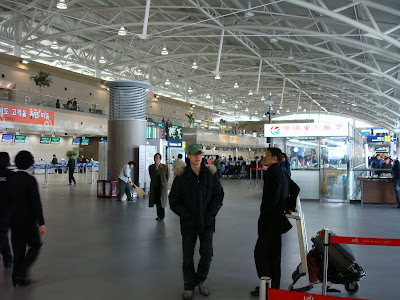 Gimhae Airport, Busan's international airport, recently constructed a brand new international terminal which we hadn't seen. It's a lot bigger and nicer looking than the last one. We took off from the airport in the afternoon and Heather was nice as always and let me sit next to the window. I like looking at clouds. 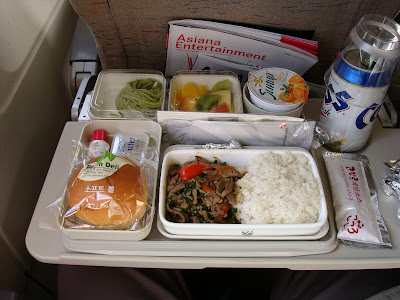 Although it's become fashionable to complain about aeroplane food these days, I always look forward to receiving my tray. This is the lunch provided by Asiana Airlines, bulgogi and rice with sides. I like how everything always comes in a packet and take pleasure in finishing every piece of food and then folding up the wrappers neatly. The air hostess seemed particularly delighted that I had left my tray so clean. Heather was noticeably less amazed. 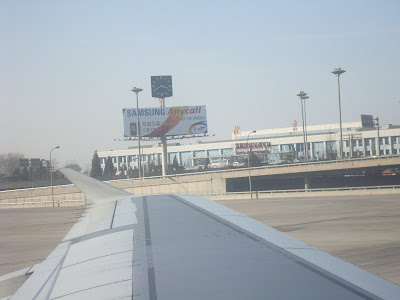 Touching down at Beijing Airport I squinted out of the windows to get my first look at the capital. A Samsung billboard greeted us on the tarmac, which was an interesting reminder that we weren't too far from home. It was about a 2 hour journey. 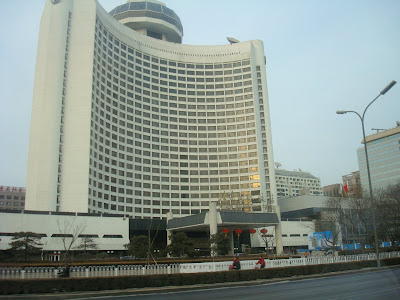 We caught the airport limousine bus to our hotel after a short while. Some of the expressways in the city are very wide and the first things I noticed were the size and differing architecture in the buildings. That and the number of large birdnests I could see in the trees. I counted more than twenty on the way in. 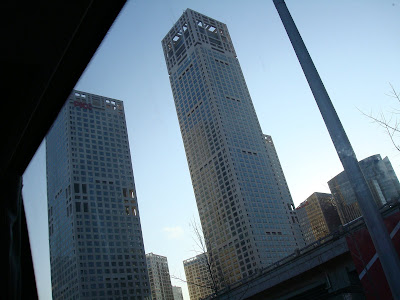 The apartment blocks are similar to the ones in Korea, just a lot taller. When I see buildings like this I think back to the tallest building in Adelaide, the Santos building, which has only 27 floors. Many of the apartment blocks in China are more than double that. 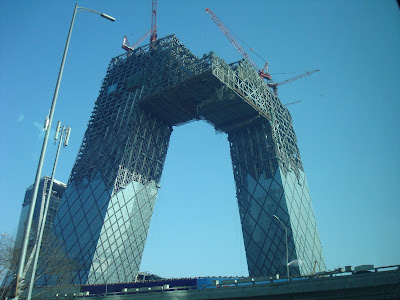 This mysterious building near our hotel was still under construction. I'm no engineering expert but it looks like they need another column or something. I guess someone knows what they're doing. 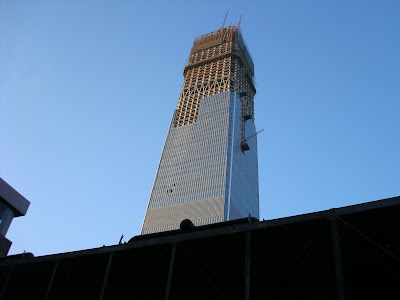 This is the China World Trade Center Tower 3, which is also still under construction. It's due to be completed before the Olympics and will be the tallest building in Beijing at 330 metres. Inside there are going to be 30 elevators and a hotel lobby on the 71st floor. Right now it looks like a giant dalek. 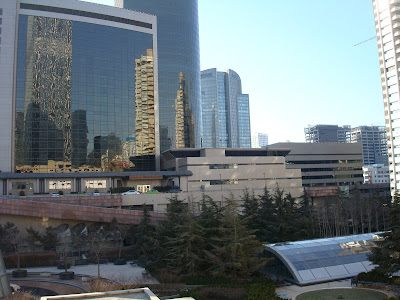 This is the view from our hotel window, which was within the surrounds of the WTC complex. There were quite a few hotels in the area and most seemed to have been built within the past decade. 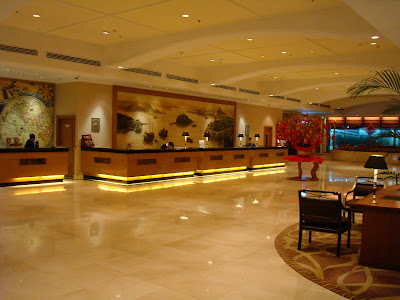 Our hotel was the Traders Hotel in Guomao which was very nice. We took a package to Beijing that included airfares and accommodation for three nights for $700 each. Originally the price was $500 but then the travel agent mysteriously inflated the price. It was still a good deal though. I'd recommend this hotel to anyone who can get a decent price because it was very comfortable and centrally located. 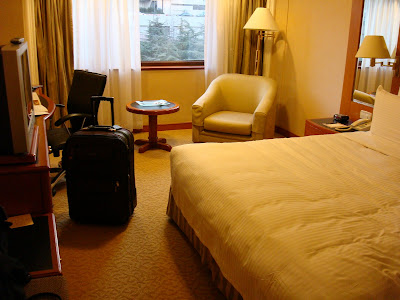 Our room, which was cosy enough. Flicking through the channels of Beijing TV, I found it surprisingly similar to that in Korea. What I like most about staying in hotels is how you leave the room messy and come back later in the day with everything neat and tidy. If I lived that way for a while I'd turn into a brat. 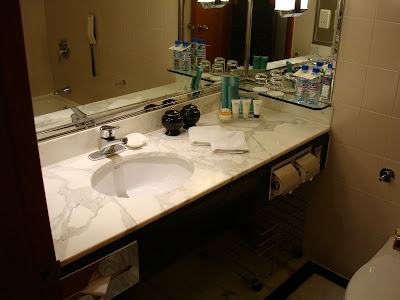 I also like taking little bottles of shampoo and soap home with me. When I was young I used to collect 'packeted things', which were defined as anything small that was packaged and unopened. I had a couple of hundred items from various places. 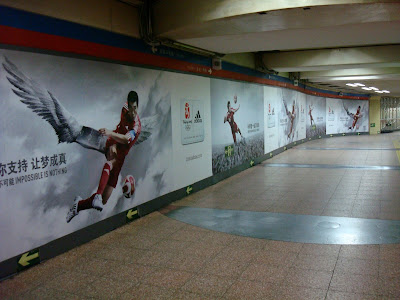 After we freshened up a little, we headed for the Beijing subway to have a look around the city. All around Beijing now, signs of the upcoming Olympics are very obvious. The city feels like it's undergoing change and it would really be exciting to come back when the games start. 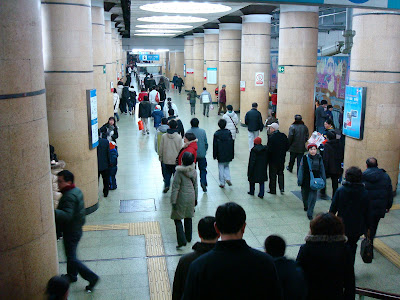 A view of Guomao subway station. Although Beijing is so large, it has about the same number of subway stations as Busan, which made things simpler. Seoul's subway line map is grotesquely complex and looks like a colourful flying spaghetti monster. 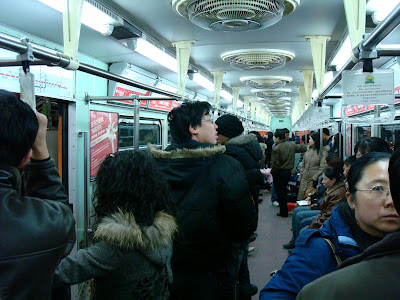 The subway cars themselves weren't too bad either, just a little creakier and the brakes whistle when the train stops. 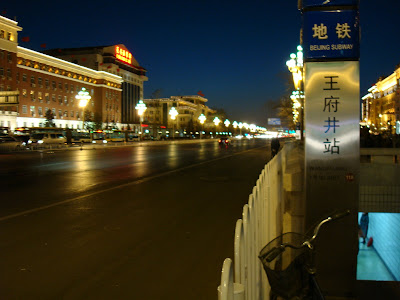 The first area we went out to was WangFuJing. It's best described as a very western influenced part of the city with a lot of recent constructions. The street layout has been carefully planned and it felt more like a European city than a Chinese one. Heather said it reminded her of Paris. 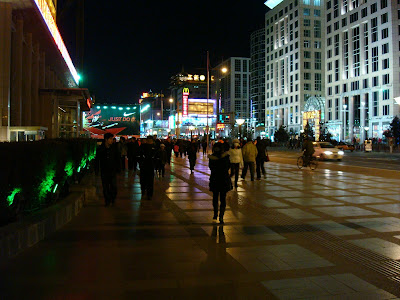 Throughout WangFuJing are plenty of shops selling exorbitantly priced imported products, like Rolex watches and Calvin Klein. The area is quite nice to walk around in and I ended up buying a hat. In comparison with Seoul, WangFuJing would be the Beijing equivalent of Gangnam. If you ever make it to WangFuJing someday, which you definitely should if you go to Beijing, take the alley right in front of the huge Nikon billboard. It's surprising how drastic the scenery changes. Within 100 metres the bulildings change from large pristine monoliths to the kinds of shops you'd see in Chinatown back home. Actually it really did feel just like Chinatown. Funny that. 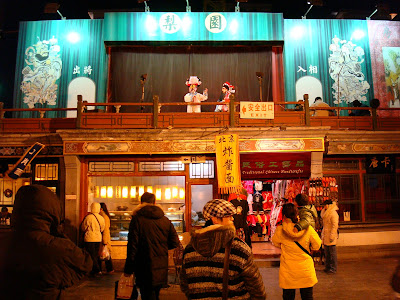 These two actors were performing a traditional Chinese play with high-pitched dialogue. Below were pedestrians busily finding a good place to eat. 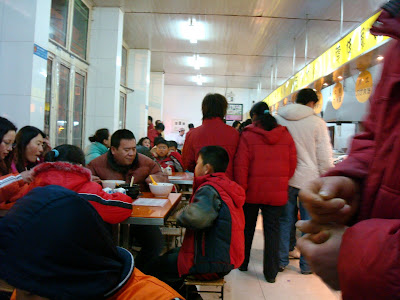 Slightly famished, we sought a regular restaurant to grab a bite to eat. When travelling overseas I always enjoy eating at cheap local places. The waiters in the red coats at this restaurant were busy seating customers who were flowing in and out like baitfish. We were seated on the same table as a Chinese family which was interesting. 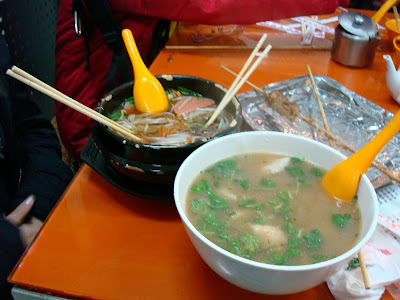 This is what we ordered. On the left is a regular noodle soup, which wasn't too bad and closer to the photo is a coriander and dumpling soup. Coriander is completely absent from Korea and Heather hates the taste of it. I originally disliked the taste, but after getting used to it I can now eat it with just about anything. We also had two skewers of barbecued lamb which were really good. The entire meal cost us $4. 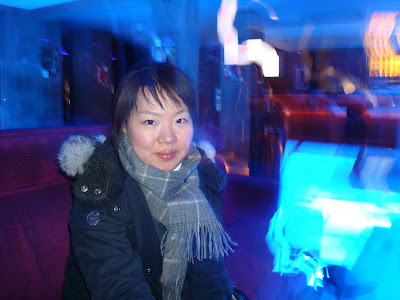 After that we headed out to the Sanlitun district, which we had heard was famous for its bars. We asked some friendly German tourists for their recommendation of a good watering-hole and they suggested this place, Bar Blu. It was a nice enough place and we enjoyed a Caipirinha, the same cocktail we enjoyed in Osaka. Here's Heather, posing for one of my experimental camera shots on 'twilight mode'. 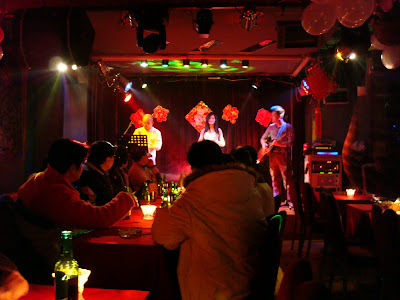 Within the Sanlitun area are some bars with employees who stand on the street. It seems that their sole job is to 'coax' people into entering their particular bar. In Beijing, coaxing means dragging you by the arm despite your efforts to continue walking down the street. If you continue to resist, for approximately 30-45 seconds, they let you continue on your way. We humourously fought our way past the first batch but were quickly swept into the second bar. We were looking for a drink anyway.

This bar was quite nice, pricey by Chinese standards, but average when compared to Korea. The good thing about it was that it had continuous live entertainment, including belly dancers and this band which was quite good. The guy on the left sang 'One Night in Beijing'. How very appropriate. 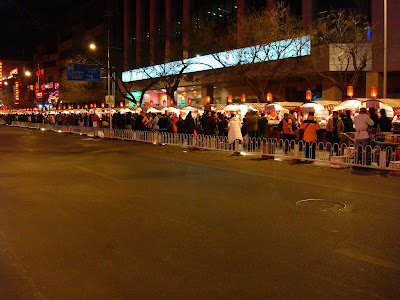 After a couple of drinks we wandered out onto the streets where the crowds had died down a little. Up the road was this long line of street vendors selling all kinds of food for as far as the eye could see. Street food in Beijing is more varied than that in Korea. 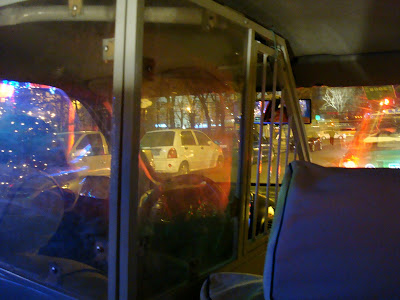 Then we caught a taxi home. From my experiences, crime in Korea is so low that it's something I barely think about. People will steal things of course, but I've never felt threatened late at night. Beijing has a slightly different feel to it, which was very evident in this taxi. The driver was encased in a virtual prison to prevent people from robbing him. Not all of the taxis we caught had this kind of fortification though. 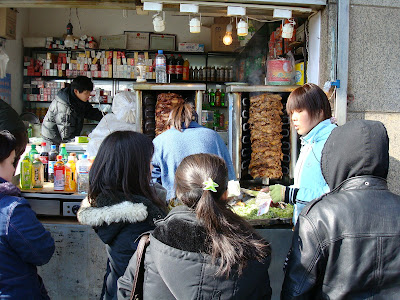 The next day we woke up early to head to the Great Wall. While we were trying to figure out the bus route, we bought some meat-filled buns for breakfast from this place. They were fairly average, but were filling and only cost us 45 cents each. I love travelling cheaply. 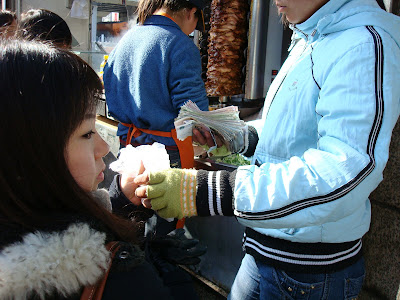 Check out the wad of cash in the street vendors right hand. I saw this a lot in Beijing, huge wads of cash being pulled out whenever change was needed. I'm not sure if they did it out of necessity or to show off, but I was certainly impressed. I added it up in my head and realised that a handful of money like that only works out to be about $50. But that can still buy you a lot of stuff if you shop at the right places. I'll show you some bargains in the next post.

Well this is the first of three Beijing posts that I have coming along. Stay tuned.

Hi Lee
This is Su-Hyun who exchanged email. I am not sure you remember me or not. I leave message just to say hello. I came to Adelaide last January for studying. You are Busan, my hometown:), I am in Adelaide. It seems that you have a good time in Korea. Look forward to seeing your next posting. :)

Hi Su-Hyun, I remember we talked about some language program for university I think.

I hope you have a good time in Adelaide.