Birthdays and Another Aquarium

When our branch first opened 8 months ago, there were 3 teachers and 5 administration staff. We've been expanding steadily since then and now have 11 teachers and 6 admin. Our enrolments have settled to around 300 students, but we're aiming for 350. 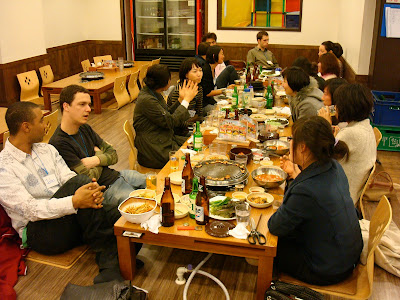 Recently we had a staff dinner to celebrate our expansion. Seated here are all of the current Saha staff, minus me who took the photo. Dinners like these are always a good time to spin a yarn or two. 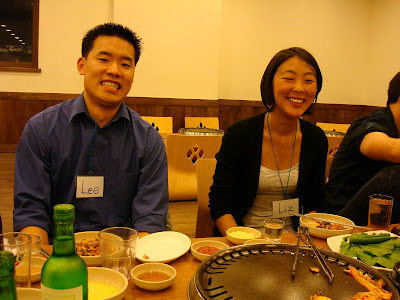 Here's me and Liz, who is an Australian adoptee from Sydney. She recently joined us as an April English teacher with her husband Simon. Liz was originally a reader of this blog back home, and after some correspondence between us, she ended up getting a job at the same branch. One day you might be working with me too! 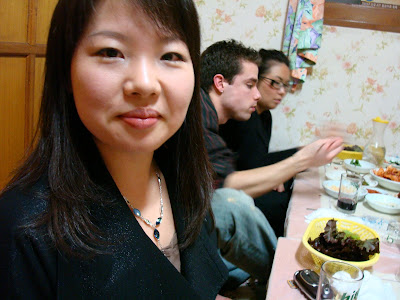 The following day was Heather's birthday. We had dinner with some colleagues before heading off to the Pusan National University area, known as PNU in local lingo. In this photo Heather is posing with the necklace I bought her.
A pretty necklace for a pretty girl. Hoho. 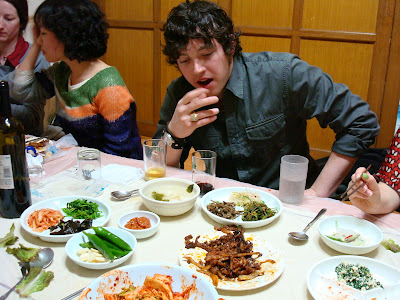 We ate at a restaurant on Mount Keumjeong, where they sell goat meat as a delicacy. Although it's fairly close to the city, apparently this is the only area that will sell it in restaurants. I ate goat meat before in Australia because I used to live with a French flatmate whose friend liked hunting in the Australian outback. One day he showed up at the flat with the remains of a feral goat he had shot. We ended up cooking it with red wine sauce.
Goat meat is tasty, fairly chewy and similar to beef. 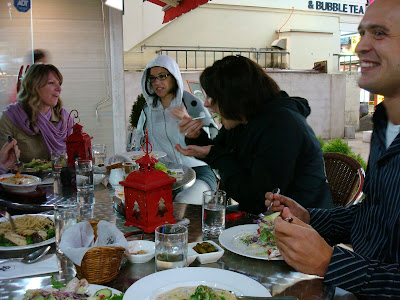 Then the following weekend it was Jef's birthday. I remember coming down on the bus with him from Seoul after training. Eighteen months later and we're still both here and going strong. Jef wanted to eat at an Italian place in Kyungsung-dae, which turned out to be quite nice. Although it was more authentic than the average Italian restaurant here, you will always be served with sweet pickles as a side dish. It's the substitute for the ubiquitous kimchi banchan. For some reason Koreans prefer the sweet spiced pickle over the arguably more delicious Polski ogorki. Give me the latter any day. 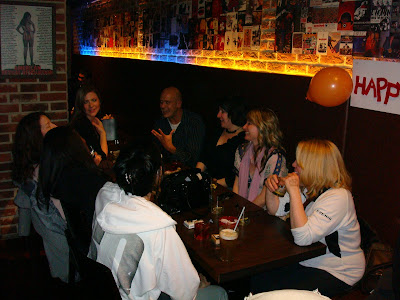 After that we went to the Kino-eye bar, a place with a cinematic theme to it. Jef had organised an extended happy hour for everyone. Are they all girls at his table? Well, yes.
Jef is tall and witty, hence being very popular with the ladies. Nearly as popular as me. 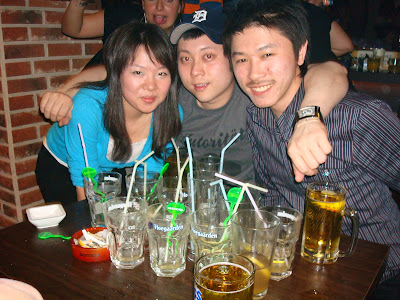 On the right is my new friend from Pusan University, Min-Hyo. We speak a mixture of Korean and English to each other and get along well. He brought his friend along and we enjoyed some Long Islands together. Korean university students will generally choose Korean beer and soju over more pricey Western spirits. 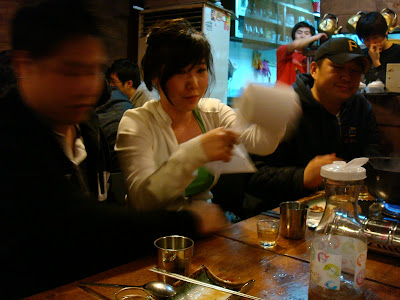 And then in the wee hours of the morning we gathered a small crowd and went for some late supper. I think there needs to be a new name for the meal eaten at this time (between the hours of 3am and 6am, but before you have slept). It's not really a supper and it sure isn't breakfast.
Nestled in the blur of this photo is Maya, a Korean-American who recently joined the company. Here she's displaying the appropriate dispensal method of toilet paper after a minor spillage of alcohol at the table. There are numerous techniques for doing so. 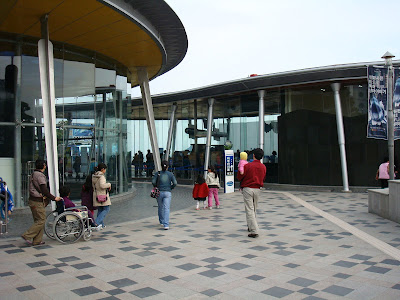 Remember when I took you to the COEX Aquarium in Seoul all those months ago? Well it was only until last weekend that I ended up visiting Busan's very own aquarium in Haeundae. It's a little smaller than COEX, but is owned by some Australians from Queensland. Heather and I decided to visit on an otherwise lazy Sunday afternoon. 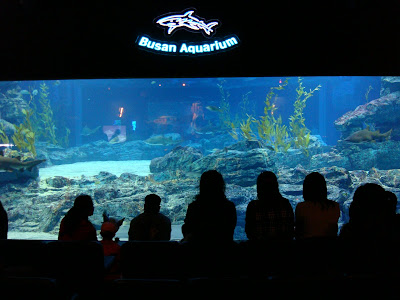 The tanks were big enough. I once saw a documentary on how they manufacture the glass for large aquarium windows. It's a complicated process. 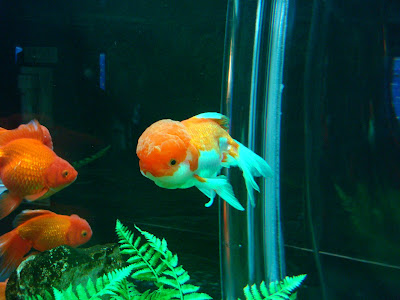 Heather thinks these fish are ugly. I'm not sure what the purpose of the fleshy forehead is, but I think it looks kind of nice and reminds me of mandarin flesh. 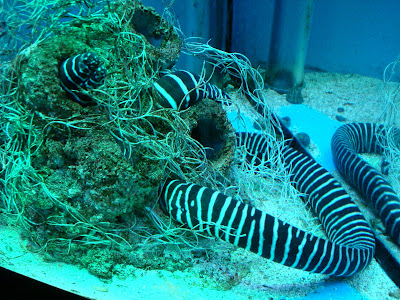 Most of the fish were similar to the ones in COEX, so I'll spare you the details this time. These stripey eels were new though. Stripes can mean many things in the animal kingdom, but it usually means 'stay away from me please'. 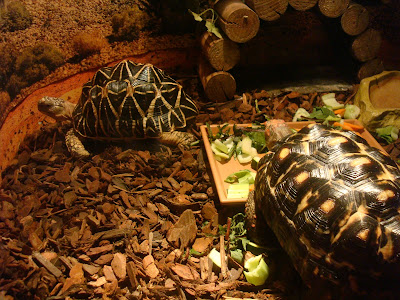 Some cabbage eating tortoises. They would look nice in a knitted tea cosy. 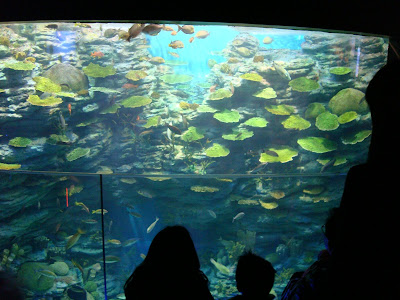 This tank spanned two floors with double viewing platforms. It was designed to show the depth differences between the surface and bottom feeders. I liked the shimmering effect of the lights. 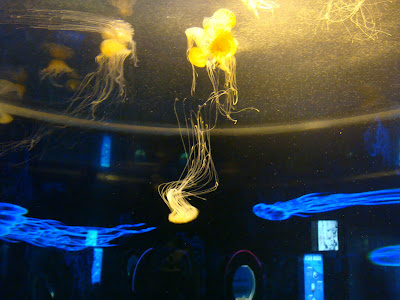 'Jellyfish' in Korean is haepari which literally means sea-fly. These ones were swimming around a fluorescently lit tank in a mildly mesmorising fashion. I stared at them for around 5 minutes. Those ones at the top seemed to have tangled themselves up and were all trying to swim in different directions. That's why you need to keep your tentacles to yourself. 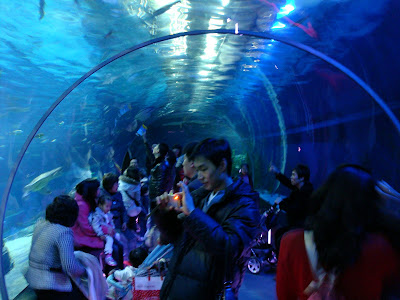 Similar to the COEX Aquarium, there was also a walkthrough tube with sharks and turtles swimming overhead. 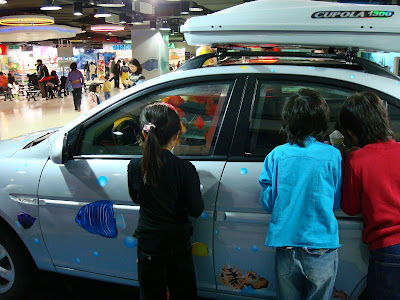 These kids were looking at the Haeundae display, a car that had been converted into an aquarium with large goldfish inside. 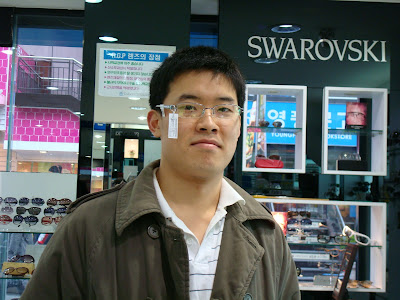 Since coming to Korea my eyesight has slowly gone fuzzy. According to Wikipedia it's because my eye's crystalline lens has lost elasticity resulting in a limited ability to change focus. So I went to the angwa, or opthamologist, for a diagnosis. It ended up that my sight wasn't all that bad, but I now have these particular glasses for when I need them. My eye test and glasses together cost me less than $100, but if I wanted the cheapest frames, it would have only cost a mere $30. 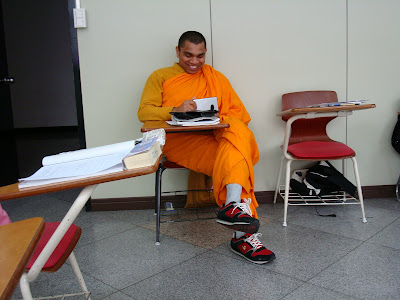 Maybe I need glasses because I'm studying too much these days. I go to Korean school on weekday mornings for 4 hours before heading off to work. Here is Ratana, one of my classmates, who I studied with back in the fall term last year. He's a Sri-Lankan Buddhist monk who lives at the Taejongdae temple. I asked him what he does in his spare time, and he said he likes to surf the net. Sometime soon he'll be visiting this website. Hi Ratana! 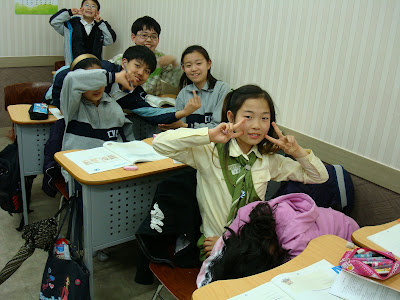 Sending us off this week are the students of my English Chip 3 class. They're a noisy bunch but full of energy and fast learners. It's always good to teach a few younger classes because they remind you how much fun it was before you really knew about the world.

That's all for this time! Spring has slowly started to arrive, so it's high time for some more outdoor activities.

I am still kicking myself for not buying glasses while I was in Korea!