We just arrived back from Jeju Island yesterday (Sunday) and had a good time there. I'll upload those photos and share them with you when I have some spare time. This post is a little shorter and covers the week before we left.
Unfortunately for that particular weekend I left my camera at the hagwon, which was a little silly of me. So half of these photos were taken by friends and associates who I've tracked down on Facebook. 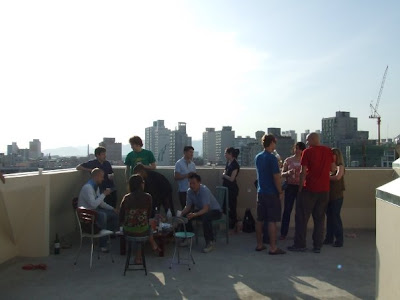 Jordan and Michelle have always had a nice rooftop on their apartment building, so for Tyler's birthday they decided to hold a rooftop barbecue party. It was a nice spring afternoon with a light breeze and plenty of sunshine. Photo: Nicole Kalisz 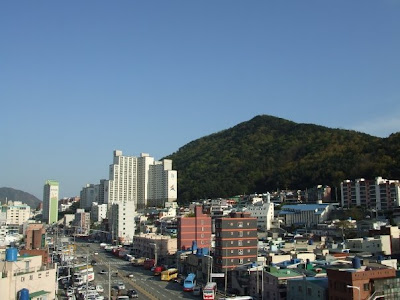 Here's the view looking west. Saha is the furthest suburb on this side of the city but a good public transport system puts everything within reach. Our school branch is just off the photo to the left. Photo: Nicole Kalisz 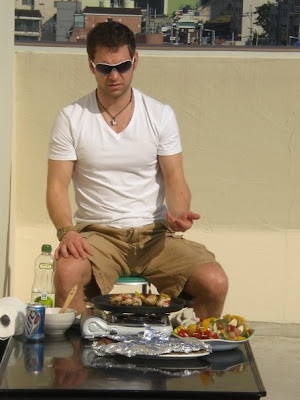 Jordan and Michelle have always been great hosts, holding quite a few dinners for everyone in the past. We took a portable barbecue upstairs and Jordan grilled chicken skewers and hamburger patties, while the rest of us looked on. Jordan drank light beer while he was cooking, which has long been part of an unwritten code for those who take on the burden of cooking at barbecues. My respect to those who do. Photo: Theresa Nicolai 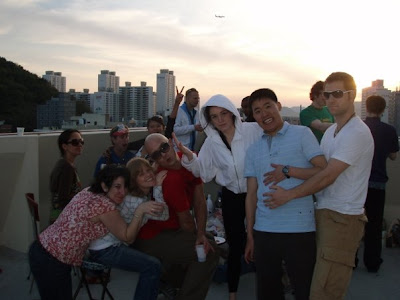 We started at 3pm in the afternoon which was nice for a change. But that meant we were a little tipsy by sundown. Evidently we were a little jovial for this particular photo and it appears that I had finished eating by this time. Photo: Niko Davis 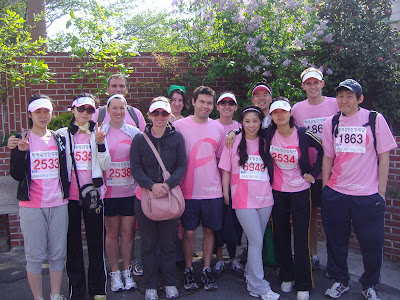 The very next day at 9:30 am, we went on a charity run for breast cancer research. CDI South put together a small team to represent. Here we are at Millak station, although the reason we met at this particular location still eludes me. Note the pretty flowers and brick wall in the background. Photo: Jareb Steines 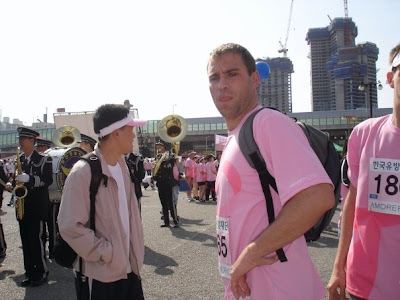 I don't exercise these days due to time restraints, but I used to jog fairly regularly. I ran in the 10km and pushed myself. In the end I got a time of 1 hour and 1 minute. But for the next two days I had difficulty walking and transferring from a standing position to a sitting position. Now I feel okay though. Photo: Maya Son 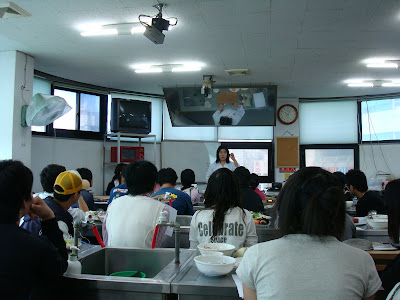 Our Korean school had a special cooking lesson on Thursday last week. We're nearing the end of the term and it's been good, but I'm looking forward to getting some more free time in my schedule. We went to a cooking school out in Dongnae. 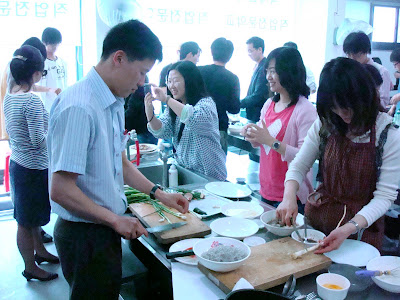 Back in the day I used to be a restaurant cook for a lot of my high school and university years. I've been a bit out of practice in Korea but the cooking instincts still remain. One of the first things I want to do when I get back to Australia is to walk back into my old kitchen and feel the weight of a decent wok in my hand again. I used to work 6 nights a week in that kitchen, saving up the money to come to Korea. 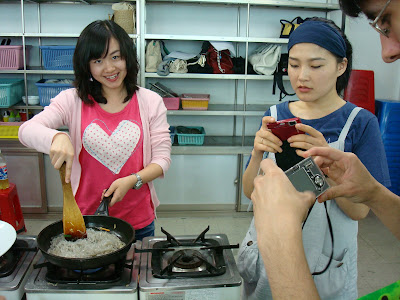 We were split into smaller groups and divided the tasks up accordingly. On the left is Anna, a Chinese student from our other level 3 class, and on the right is Ge-Ge, who is the only Mongolian student in the school. She's also the only Mongolian I've ever met. 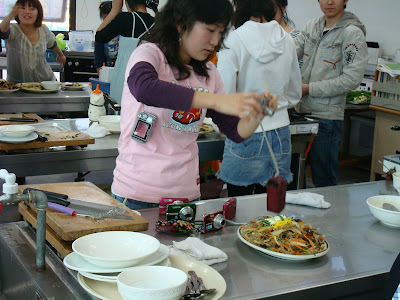 It seems that digital cameras became a standard inventory item for everyone sometime ago. This girl was cycling through six cameras to take photos while her friends were cooking. I remember the days when I used to wind on my disposable cameras and get photos back from the developer that were a little less pleasing than I expected. 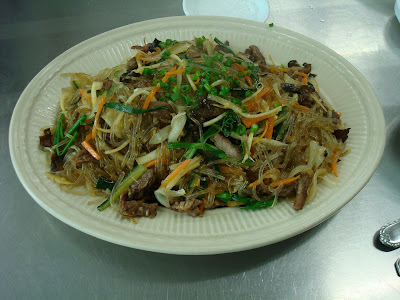 This was the end product of our toils, chapchae, which is a noodle dish made with beef, vegetables and clear mung bean noodles. Koreans will often eat this dish during festive times. It tasted pretty good for a group effort. We also made seafood pancakes. 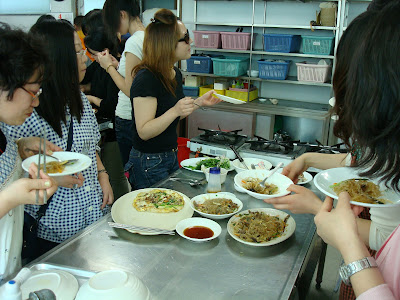 Here we are enjoying our concoctions. It was actually a lot more fun than I expected.


This is a video I made of my classmates reading the dialogue that they wrote for class. Our teacher is recording them with an MP3 player. The entire class is taught in Korean but I can manage fairly well these days. Learning Korean remains one of the most difficult things I've ever encountered. It will be an ongoing process. 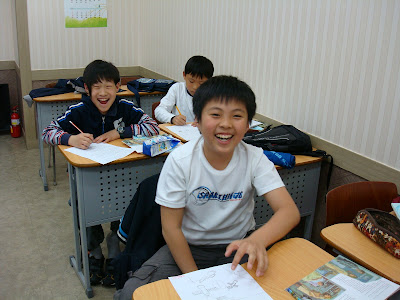 And here are some of my students. These boys are naughty at times but generally in good spirits. The one closest to the photo recently requested that his English name be changed to 'Farrand'. I granted his request, but it was interesting, because it coincidentally happens to be my surname. When I asked him how he thought up that name he told me that it's a secret.

Anyway, I'll be posting up the trip from Jeju when I have time.

That last boy... I bet there's about a 1:3 chance his surname happens to be Lee.