I've been in Seoul for a week now and things have fallen into place fairly well. Time always moves slower when lots of changes happen, and it actually feels like I left Busan ages ago. 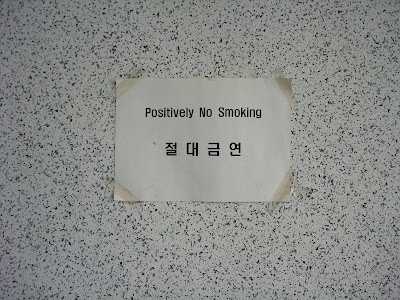 This is the sign that greets me when the elevator door opens in my new accommodation. I assume that the reverse of 'positively non-smoking would be 'negative smoking', a concept of which I wholeheartedly agree with. 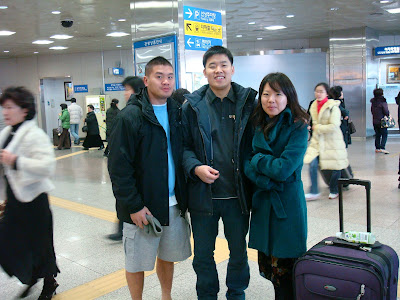 But anyway, this is how it all happened. On Friday of the week before last, at about 1pm, I went down to Busan Station with Heather and Anthony. There was a considerable amount of work to be done, packing things up and getting things organised for my move to Seoul, and they both helped out a lot.
The author of Lee's Korea Blog would like to thank them both tremendously for their efforts. 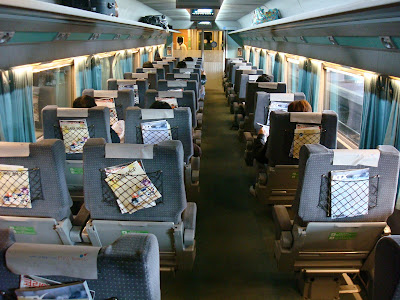 Because all of the economy class tickets were booked out, I got a ticket in business class. There are three seats across the same area, as opposed to four, and a lot more leg space. Very comfortable. Heather and I bought KTX membership for about $80, which will give you 40 discounted rides. It's something to think about if you intend to travel a lot between Seoul and Busan. 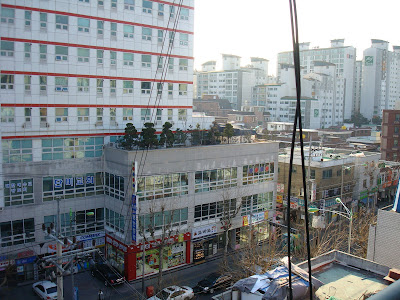 I met up with Hong-sup, another PhD student at the university, and he took me to my temporary accommodation nearby. I'm on the waiting list for the university dormitories, so he was kind enough to find a room for me to sub-let for a couple of months. This is the view from my window. Suburban Korea looks pretty much the same wherever you are.

Sometimes I like to pretend that I'm still in Busan. 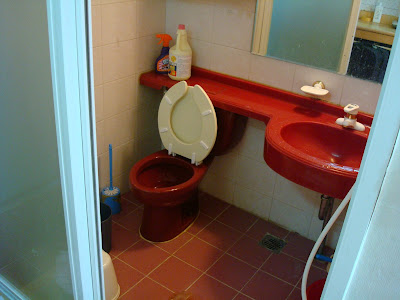 Here are my toilet facilities, which I like to refer to as my en-suite. It's technically an en-suite, because it's connected to the master bedroom. 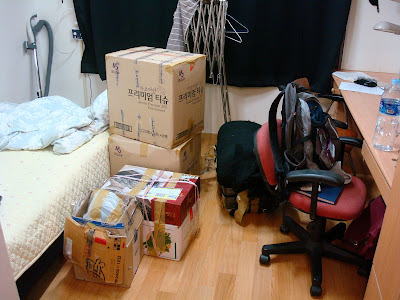 And here's the master bedroom, which is the only other room that there is. It was actually nicer than I expected.
It's a good thing to have low expectations, in general, because then you're pleasantly surprised more often. We had posted the boxes with all my belongings in them from Busan and they take up a fair amount of floor space. I've unpacked them a bit more now though.
Hong-sup asked me if I liked the accommodation. I said it was fine. There are only 4 criteria that I need for accommodation to be acceptable: The roof has to be intact, it should not be so dirty that it causes disease, the door should lock and there should be hot water. All four criteria were passed with flying colours. 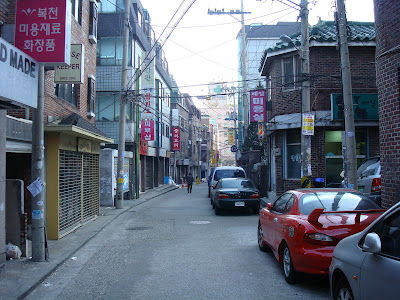 My neighbourhood is very close to the subway station in the Silim-dong area. These days it's prohibitively cold to go for a walk outside (sub zero), but I've seen most of the surrounding area. 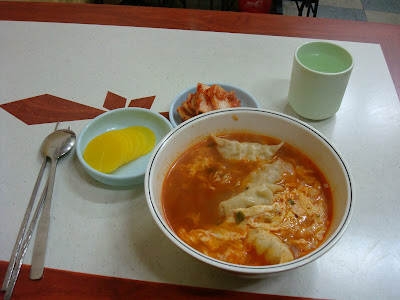 Because I'm a student again now, I've tried to get myself into money-saving mode. Here was my first meal in Seoul, mandu ramyeon. Quite nice, and only W3,000. 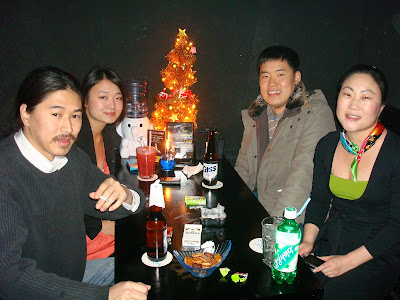 The following day I met up with Eric, Maria and Sara, who are all adoptees that I stayed with back in Koroot in 2006. Eric is French, Maria is Danish and Sara is Swedish. If you flick back in the blog far enough, you can see pictures of them. Eric and Maria have been staying in Korea, but Sara was just back for a visit. It was nice to see them all again. 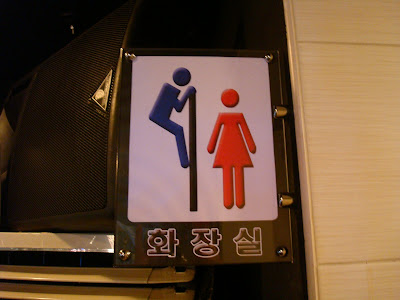 Here's an interesting mens/ladies sign for the toilet in the bar that we went to. 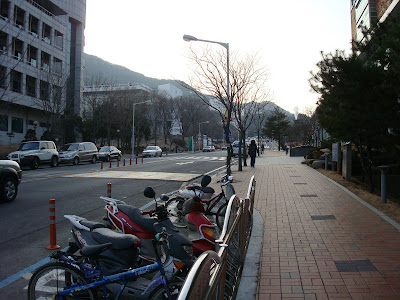 I started my PhD at Seoul National University last Monday at 9am. The campus itself is very large and surprisingly spacious. It's situated in a mountainous region within central Seoul, which is a common feature of university locations within Korea. Because the land is cheaper in the mountains, universities choose these sites to have the most space at an affordable price. 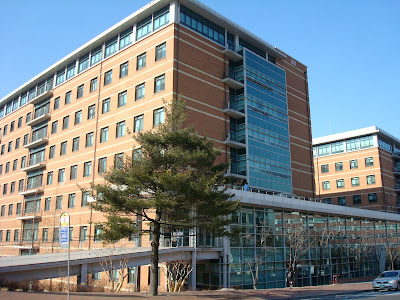 Here's my building which is called the College of Agriculture and Life Sciences building. Most of the laboratories inside focus on biotechnology, plant-microbe interactions and biomaterials. 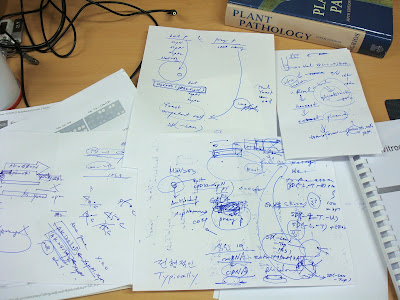 The broadest definition of my current project is that it's focused on a bacteria that attacks rice crops. There's a fair bit of technical jargon that I'll skip around for the time being, but basically we're investigating a toxin that the bacteria produces. To do this in depth requires a lot of somewhat complicated experiments to be done, that should all hopefully have results that agree with each other. My partner is a funny guy called Hoon Cheong, who I'm sure you'll be hearing about a lot more in the future. In this photo are his explanations of the concept behind a protein interaction experiment that we need to do. I currently understand about 70% of the theory. 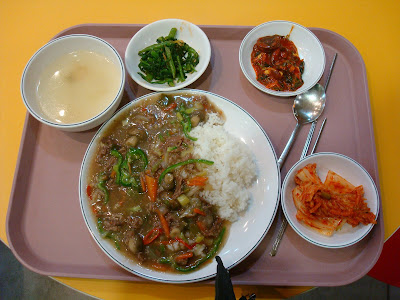 The food at the university is pretty good for what it is. The cafeterias deal with large volumes of students and will only make two dishes to choose from. You line up, pay around $2.50 and get your meals from a production line of ajummas who will hand you all the dishes. The food is pretty good and there's a nice variety. In this photo is songi dopbab (stir fried mushroom with rice). I give it a 6/10 for flavour and a 9/10 for value. 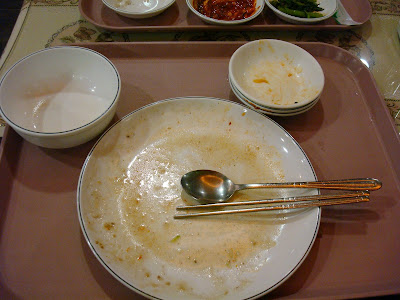 When I was younger, we were always taught to finish our plates. The serving sizes at the university are quite generous but I still manage well enough.

In case you didn't notice, I arranged the plates in this photo to look like Mickey Mouse. 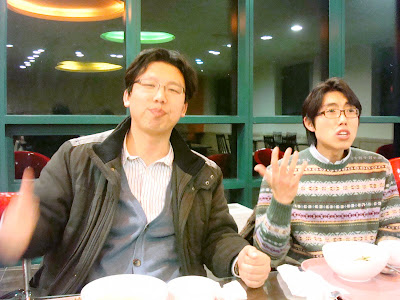 On the left is Hoon Cheong, a PhD student who I'm working with in the lab. On the right is Hong-sup, who organised my accommodation for me. They're showing me all the things I need to know. 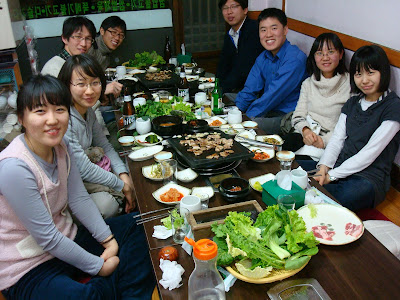 We went out to dinner with the other lab members last Friday. Everyone is quite friendly and they're all remarkably hard workers. The predominant language in the laboratory is Korean, which makes things a little difficult for me, but I can't complain. Hopefully at least it'll help me to become fluent in the language. 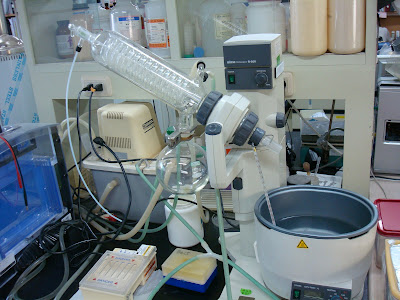 Most of the laboratory equipment is familiar to me, except for this device. Hong-sup told me that it's some kind of evaporating machine, but I like to call it the 'super-duperiser'. 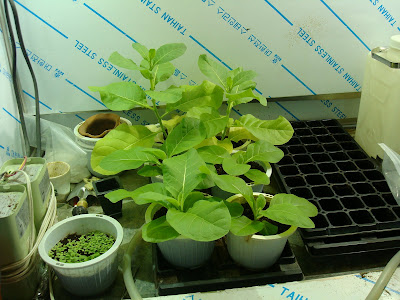 Some of the laboratory techniques and general practices in Korea are different to Australia. In Korea there's a lot more improvisation and a focus on cost-efficiency.
In this photo are some tobacco plants growing for a hypersensitivity response experiment. In Australia, these types of things are always done in regulated growth chambers, but these plants are growing in the fume cabinet in the lab. I thought it was pretty funny when I first saw it, but I've gotten used to them now. They've hooked up lights to turn on and off during the day. 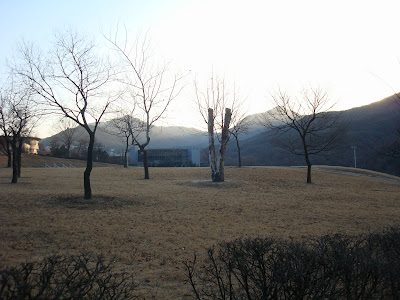 One other thing I can say though, is that Korean graduate students work much harder than most Australian ones I have met. On a typical day, I will get up at 7:30am, be in the lab by 8:40am and there will already be other members there. Our schedules officially run from 9am - 9pm daily, but the true working hours are longer than that. On Saturdays everyone comes in at 9am and leaves in the afternoon, depending on how much work they have to do. They also usually come in on Sundays.
I'm actually blogging from the lab here on a Sunday night at 8pm. Two lab members just went home and there's another one working, who incidentally just told me that there will probably be someone else coming in later tonight. But I had heard a lot about working hours before I came, so it wasn't a big surprise. 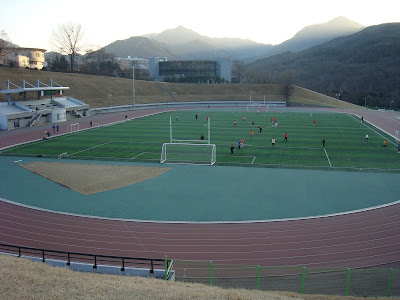 I went for a short walk around the campus today. There are plenty of facilities here, like computer labs, sporting facilities, gyms and restaurants. 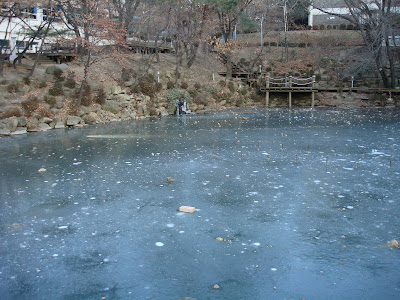 In the centre of the university is this pond, near the humanities building. It has frozen over during the winter, which is something I've never seen before. Hoon told me that there are fish living underneath the ice. There's also some bricks and stones on top of the ice. How do bricks and stones get on top of a frozen lake?

That's all for me this week! I'll keep you updated with how work in the laboratory is progressing, and with life here in general. I'm looking forward to getting into the swing of things.

See you next time!
Posted by Lee Farrand at 6:51 pm

Are you a chemist? Im a lab rat, and that fine piece of equipment is a vacuum evaporator! One of my favorites and one of the most useful pieces of equipment particularly for organic chemistry!

It "pulls" a slight vacuum to hold your vessel with the sample in it and also to improve evaporation. The device spins the sample container in a warm water bath. The coils inside the long tube is for cold water to condense the vapors back down to ensure only the material you want to evaporate off comes off!

The reason why this is such an awesome piece of equipment is because this will evaporate off liquid at a much faster rate (literally like a 100x faster or more) than if you were only relying on temperature.

Of course, by now you probably already know this. But if your research is going to be using that a lot, by the end of your research it will be your best friend. For an experiment sometime you should try evaporating ether by hand using an evaporation dish and "racing" the vacuum evaporator. The vacuum evaporator will evaporate the ether within seconds of warming up...lol


I'm starting to get real jealous of your experience in Korea. It continues to sound fascinating. I like how you seem to always have a positive outlook on things, such as your room. Most people probably would not have had as positive of an outlook as you did about your room. I've seen those rooms and I know what you are talking about! lol.

Continue blogging and good luck on your studies!

Thanks for the comments. Most of the work is biochemical in nature, but I also get to go out to the fields and grow some rice for experiments!

As for being positive, well I'm not always like that in real life, but hey, who wants to hear a whole bunch of whinging on a blog? Not me sir.

It's like you're a proton and the world is your cathode ray tube! Haha.. My jokes are awful.

Seems like you're doing some cool stuff but sounds like moet nights will be few and far between. Good luck though. You should come to vietnam to do some field work.. (pun intended). I might have to relocate here.