Year of the Ox

The Year of the Ox quietly arrived this past weekend without much ado. I wonder what ox-like things lie in store for us this year?
So far I haven't noticed anything particularly oxy about things in general, but perhaps it takes a while for the oxiness of it all to settle in. I'll keep a lookout and report to you as soon as I see something. 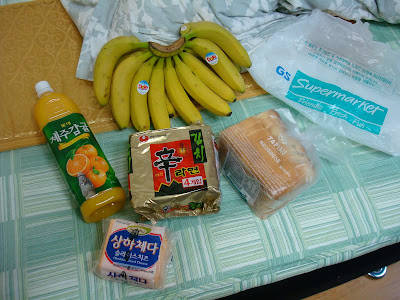 Here's a typical shopping list of mine for the week: bananas, juice, ramyeon, bread and cheese. I eat lunch and dinner almost everyday in the university cafeteria, so these things I only need for breakfast.
I was a little worried about getting a balanced diet on a strict budget up here, but the university cafeteria are doing a good job. University veterans know that there are only four basic food groups for grad-students. They are: sugar foods, fat foods, caffeinated and free. 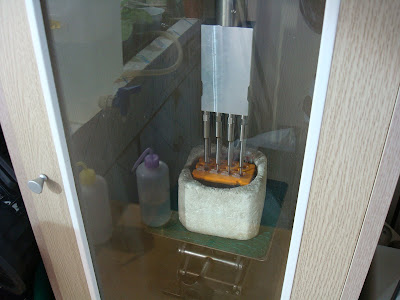 This device is called a homogeniser. I think it blows lots of tiny bubbles and mixes liquids, like a cappuccino machine, but for science. It makes a high pitched squeal when it's on, but I haven't had the dubious pleasure of switching it on all by myself yet. 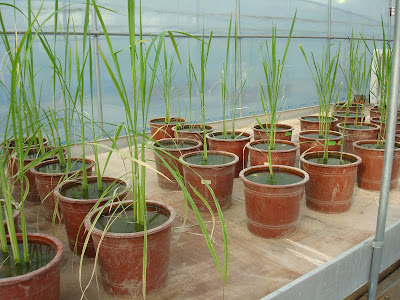 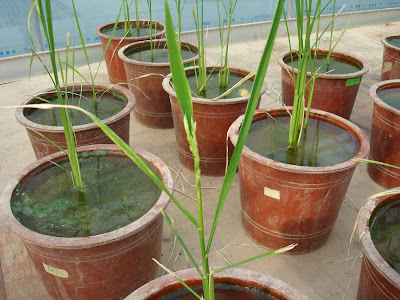 We visit the Suwon campus a couple of times per week to check up on our plants. They're nice and cosy in the greenhouse, where the temperature is usually around 27 degrees celsius. I like how rice is grown underwater like in the pots in this photo, and also out in the paddy fields.
Did you know that rice doesn't have to grow underwater at all? It can be grown like any other crop, but the fields are often deliberately flooded with water because it keeps weeds and pests at bay. Because rice is a type of reed, it's perfectly happy in or out of the water. 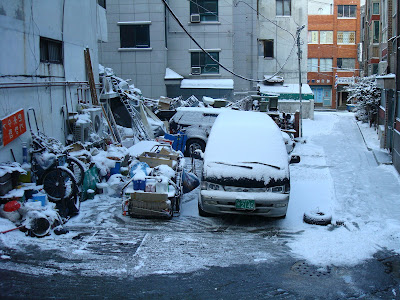 I'm slowly getting used to the sight of snow everywhere, but I still like walking on it. Last week it snowed a lot, covering everything like icing on a cake. 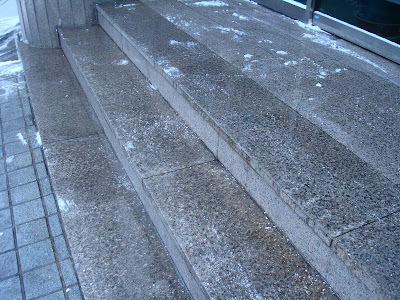 The steps in front of my apartment are usually free of snow, as are many of the entrances to the university. The reason is because the ajossis sprinkle calcium chloride dust over these areas, which melts the snow by dissolving in it. So why don't they use good ol' table salt then?
Well, because table salt is bad for the environment, especially if you have a garden nearby. 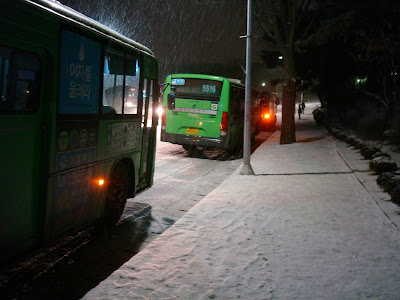 A few nights ago when I left the lab, it was snowing quite heavily. I'm not sure if it was enough to warrant being called a blizzard, but I like to entertain the idea that it was. We shall just call it a blizzard for the purposes of this photo explanation. Anyway, during this 'blizzard' the other night, I was trudging along the crunchy snow toward the bus stop and I noticed that all of the traffic was crawling alongside me at walking pace. When I got to the bus stop, there was a line up of all the different numbered buses just waiting there, with their engines running.
I guess that when it snows heavily, the bus drivers don't drive for safety reasons. The area around the campus is quite hilly and I know that the roads are slippery even to walk across. 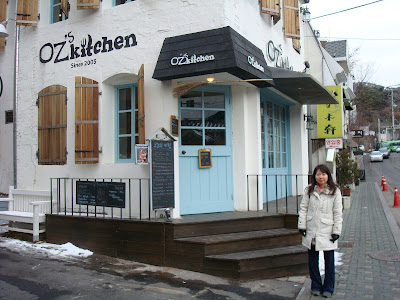 My favourite person, Heather, came up to see me last weekend for the Lunar New Year holiday. She's the first visitor I've ever had in Seoul, so it was pretty exciting. We didn't do anything special, just watched a DVD, walked around a bit and ate in restaurants. That's why I like Heather, because we can just hang out and not do anything particularly special and still have a good time. We sat in a coffee shop for a couple of hours talking about schools and teachers. 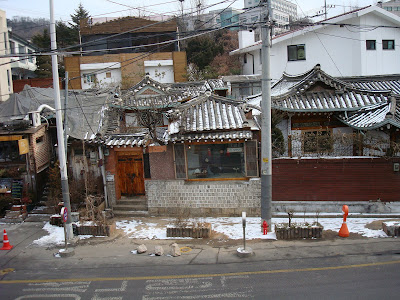 We went to a quaint little area up in Jongno-gu, because Heather had heard about a special brunch restaurant there. There are a lot of foreign embassies in Jongno and it's a nice and quiet suburb. I'm at the university most of the time, so it doesn't really feel like I'm in Seoul until I get out and about. 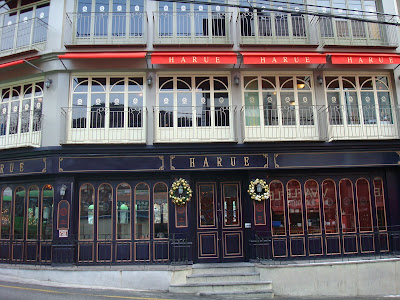 The area has a lot of foreign themed restaurants, like this one. Unfortunately our brunch place wasn't serving brunch, due to the long weekend holiday, so we walked around. This particular restaurant was selling $10 Australian wine for $80 per bottle. So we sat there for a while, pretending to admire the decor, before sneaking out quietly. 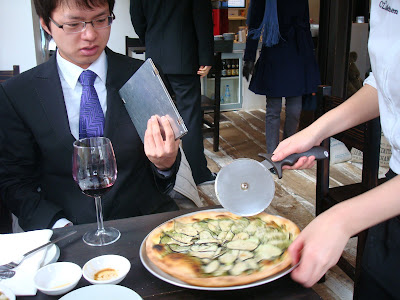 We went to a place down the road called Oz's kitchen. The food was all Italian and it was decorated with vintage-era pots and pans. In the photo above is Jang-Ho, Heather's brother who also lives in Seoul and came out to meet us. He's looking at an eggplant pizza that we ordered. It had a pesto base and the eggplant was thinly sliced and lightly grilled. Quite different from your regular Korean pizza, that will often come with toppings like sweet corn and sweet potato. 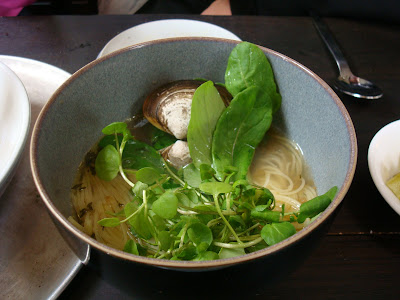 We also ordered a clam and angel hair soup, just to see how good the chef was. Angel hair is my favourite kind of pasta because it holds sauce well and isn't too filling. This dish was pretty good, and definitely a traditional style, but it had very subtle flavours. 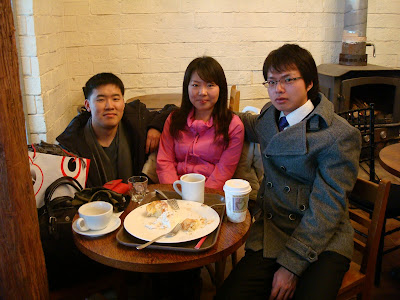 Then we wandered back to the original place that Heather had suggested and they were open for coffee and desserts. I don't drink much coffee usually, and the reason is because I like its effects and I don't want to become so used to them that I have to drink coffee everyday just to be normal. Perhaps I'm just being paranoid. Perhaps I worry too much. Perhaps I just need a cup of coffee... 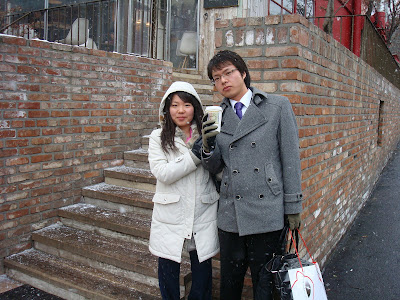 When we got outside, Heather said "hey let's take a photo of ourselves in the snow." It was actually snowing lightly, but it doesn't turn out too well on my camera. 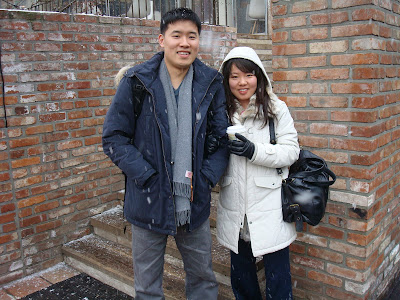 Heather and I are approaching our 1000 day anniversary later this year. I wonder what she'll buy me. Ho ho. 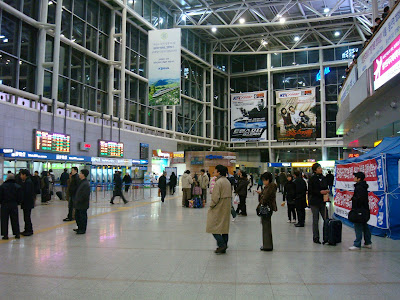 She had to leave for Busan soon afterwards because she had to go to her family's ceremony. Most Korean families will have traditional ceremonies on the Lunar New Year and Chuseok holidays. I went to one once, and it was okay. 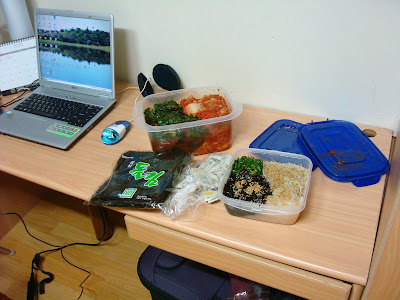 Heather delivered a gift from her mother, which was a whole lot of banchan (Korean side dishes). Heather's mother had heard that I like cucumber-kimchi, so she made it for me, even though she'd never made it before. I'm lucky to have nice in-laws. She also gave me some ddeok (rice dough) to make soup with. In Korea, they say that if you eat ddeok soup on the Lunar New Year, you turn an extra year older. They also say that when you are born, you are one year old. So sometimes, your Korean age will be two years older than your logical age. 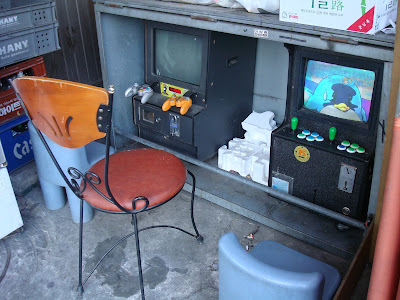 The following day, there was a new year celebration with GOA'L up at Koroot, which is where I lived for a couple of weeks when I first arrived in Korea. On the walk from the subway station, I passed these video games which I remembered taking a photo of and putting on the blog. Incidentally, the photo is still there, in the July 2006 archive. It seems like so long ago now. 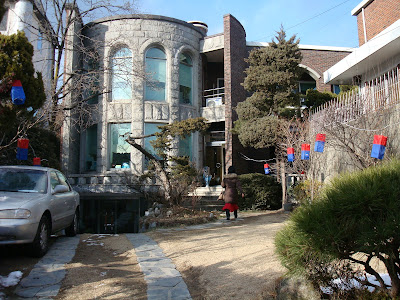 Here's the front of Koroot, which is a large house that was donated to the adoptee community by an anonymous benefactor. Adoptees who return to Korea are allowed to stay here very cheaply and it's a good way to meet people. I met some people here in 2006, who I'm still very good friends with today. 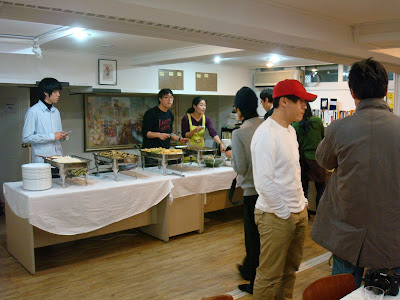 In the basement, GOA'L and Koroot had put together a nice Korean meal for us. In this photo wearing the red cap, is Cody Winter, who has been in Korea for over 10 years. He's since gotten married here and has a kid. We hung out in Busan together once and he knows me but always forgets my name. In Korea, I'm better known as 'that Australian guy'. 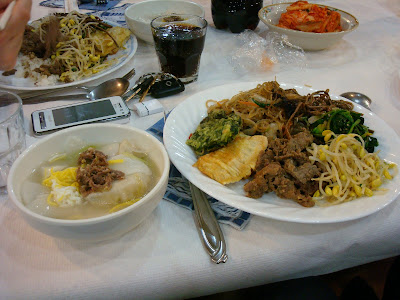 The food was good, and on the left there you can see some ddeok soup, which turned me a year older according to the Korean rule. I don't mind turning a year older now, but it'll be a different story when I'm around 35 years old. Then I'll never eat ddeok soup at new year's. 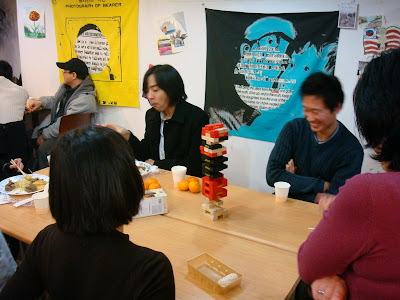 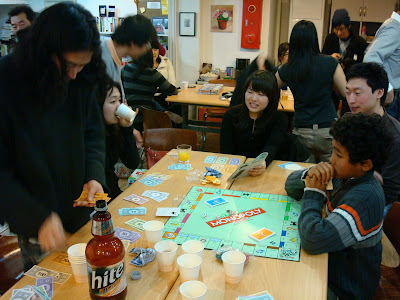 After dinner we played some games. There was Jenga, Monopoly, chess and Korean Go-Stop. We ended up playing Monopoly and although it went for around 2 hours, it was much more exciting than I expected. The game started with 7 players, but halfway through I realised that there was no way I could win, with my measly 4 properties (and no sets). So I merged with my two neighbours and we pooled all of our resources together. But just like bacteria in antibiotic media, our opponents quickly adapted and were soon thriving. They also formed merged teams and in the end it was three teams on the board. The properties and cards were all written in Korean, which made things interesting.
With some good decision making and a couple of lucky rolls, we won the game and the crowd went wild.

The crowd consisted of me and my two team mates. 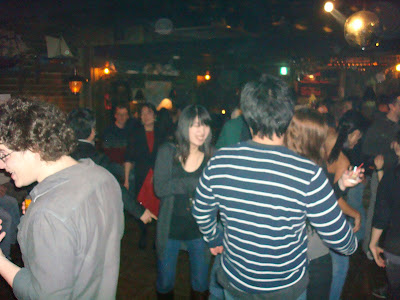 After that we went out to Mike's Cabin and had some drinks. Apparently after that I stopped taking photos for the rest of the night, but I remember going to karaoke. I also lost my scarf somehow that night. Anyway it was a good time. I'm fairly busy in the lab these days, but I'll try to get out and about on the weekends and see some more of Seoul.

That's all for me this time. See you soon!

The machine looks like a "ultra sonicator". Basically a metal rod with a tip that vibrates at super sonic speed to shred cell membranes.

Aha... yes that's what I thought when I first saw it. The sonicator is in a similar box next to it, but this one is definitely a homogeniser.

Who ever knew that cells needed homogenising?

better mixing..gets the cells the food they need (since they are not self-propelled?)....bio-kinetics :)

Anyways I totally agree with you on the coffee. I love coffee, but I refuse to drink it often because I don't want to build a tolerance. My parents are addicted to coffee and can't be "normal" until they have had at least 2 cups of coffee...so I don't think your paranoid!

Anonymous said...
This comment has been removed by a blog administrator.
7:05 pm

Your blogs are so much cooler then mine LOL

Genial brief and this enter helped me alot in my college assignement. Thank you for your information.