The reason I'm pretty enthusiastic about Toastmasters in general is because they're a non-profit organisation aimed at improving your leadership, social networking, public speaking and communication skills.

And they are fond of alcohol. 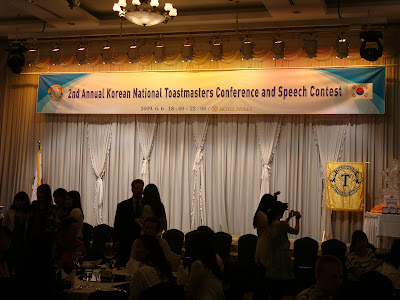 Although the first Toastmasters club opened in Korea in 1992, it was only last year that they held the first conference and speech contest. I attended this year out of sheer curiousity. 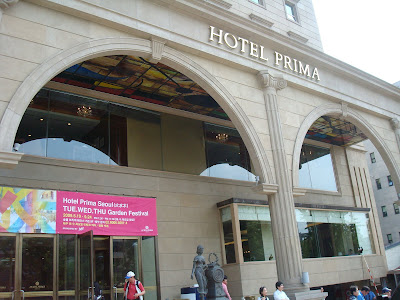 The venue was the Prima hotel in Gangnam. Quite a nice place with large seminar rooms and outdoor bar space on the top floor. And those columns are Corinthian, I believe. 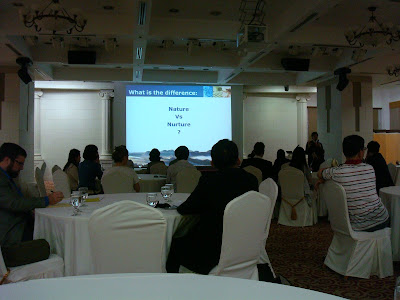 The day began at 3pm with a few seminars run by current Toastmasters. The first one was on personality, with the aim being to identify your particular character type. 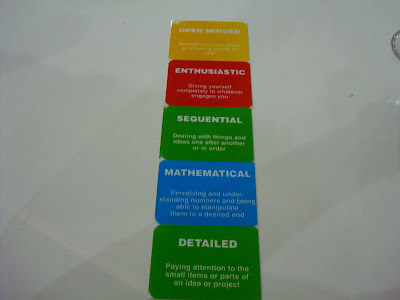 We picked some random cards at each table and had to prioritise them from top to bottom, on how we would describe ourselves. It turns out that each different colour belongs to the same character type. 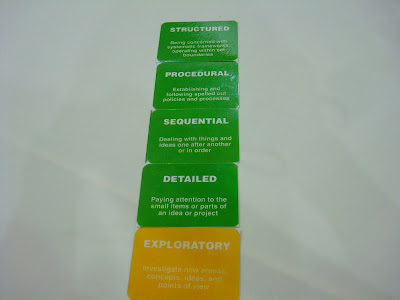 Then we were allowed to swap and trade our cards with others and try to settle down with cards that we were most happy with. It turns out that I'm pretty green, which means that I like to structure my life. Or something.
I often muse that personality tests are rather difficult things to carry out in a scientifically rigorous fashion. Or they may just be a way for people to feel good about themselves.

What's the difference between procedural and sequential? 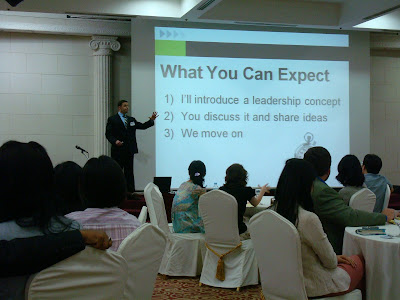 Then it was time for one of the dudes from our club to show everyone what a seminar is. Ron Cahoon is a management teacher at Dong-Guk University and his presentations are among the best I've seen. He has a very fast and engaging style with plenty of humour.

He ran a seminar on leadership, the basic premise being that leadership is a choice. I think the best leaders are the ones who feel burdened by the responsibility, but still do a good job anyway. 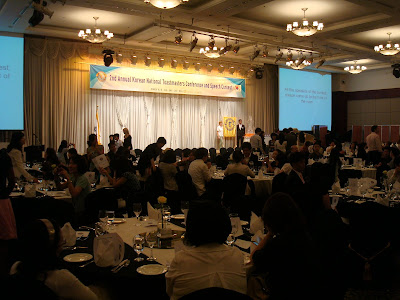 Then we gathered in the dining hall for dinner and the speech competition. There were around 200 attendees from 15 clubs around Korea. They're aiming for a goal of 60 Korean clubs, which means that we'll collectively have 'district' status. 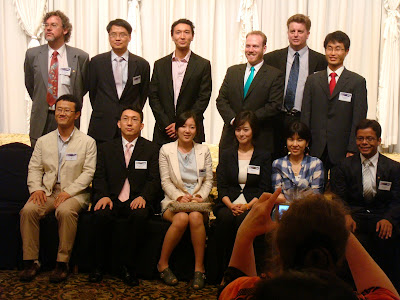 Here are some of the more notable guests of the evening. There was one guy who had been a Toastmaster for 30 years in a lot of different countries. He just passed his 350th club speech. 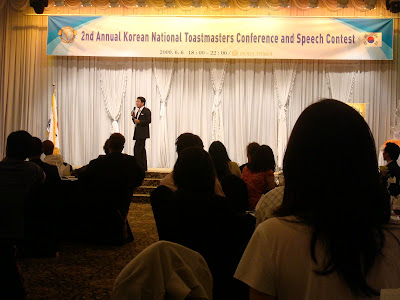 Up on stage here is Steven Kim, the founder of SYK Global. I'm not familiar with the company, but this guy is now a philanthropist, which means he probably has more money than he should have.
If I'm ever rich, I'll give away my money too. I heard that Jackie Chan is planning to give away all of his wealth before he dies.

Now that's going to look good on your epitaph. 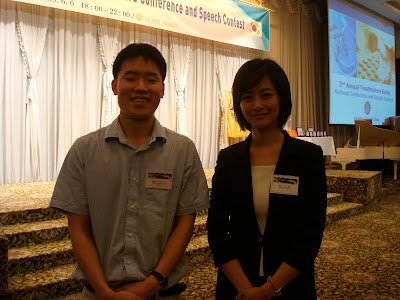 This photo is a little dark but on the right is Ju-Ha Kim, a popular news anchor here in Korea. She was quite friendly and spoke English fairly well. During the night, she gave a speech in English about how she thought Toastmasters was a good idea. 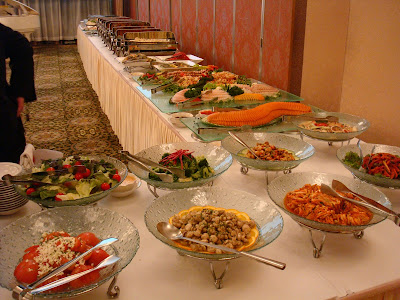 The dinner was a buffet menu. I think I've said it before, but almost every hotel's buffet menu is very similar in Korea. It's not a bad thing, because the food is good. But it always gets me wondering about the central buffet school that all of these chefs attended at some point. 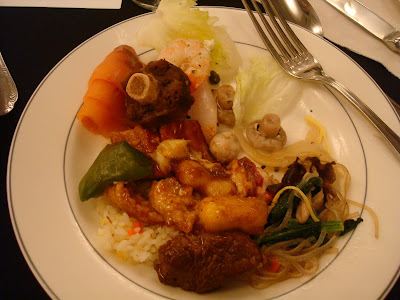 If I planned things more carefully, I would have arranged my plate in a more aesthetically pleasing fashion before taking a photo. Next time, I promise. 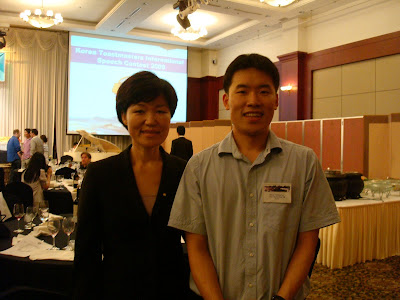 Here's me standing with Jin-Sook Lee, a journalist who attends the Pacific Sunset Toastmasters. Apparently she travels out to places like Afghanistan to report, but I don't have time for television these days so I haven't been able to see her work.

If I wasn't a scientist, I'd be a journalist. I like the whole idea of finding stuff out and then working it into a story for others. 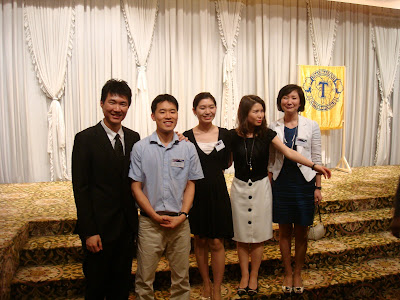 Here are some of the attendees from our club, the South River Toastmasters. On the left is Richard, who was the host of the speech competition. Then it's me, who is 'do study good'. To the right of me is Annette, who works for a headhunting agency, then Jewel, who is a professional trainer with Dale Carnegie Training and on the far right is Ji-Hyeon, who recently joined a company that sells turbines for wind energy. These are the kinds of people you can meet if you join a Toastmasters club. 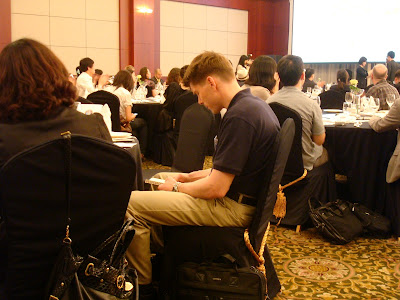 Here is Michael Jones, from Sincheon Toastmasters, practicing his speech in his head before going on stage. I had met him once during a club event and remember that he was a distinctively friendly person. Incidentally, he went on to beat the 15 other contestants and won the first prize.

His speech was on procrastination and going to the gym. Very well structured and quite funny. 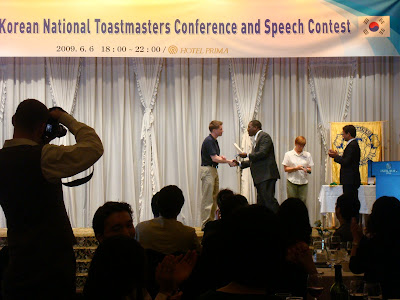 And here's Michael collecting his prize at the end of the night. One of the rules was for no photography during the talks, because it can distract the speakers. 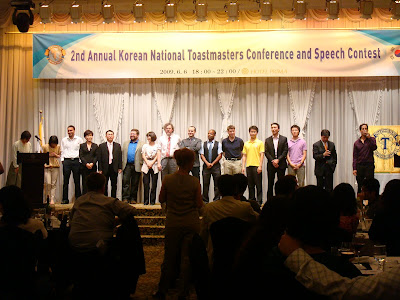 Here are all the speakers from the night. The speeches were of an impressive quality. All of the themes were inspiring.

If I had to summarise the wisdom gleaned from the night, then it would go something like:

All of these things we already know, but it's always nice to be reminded in an entertaining way. 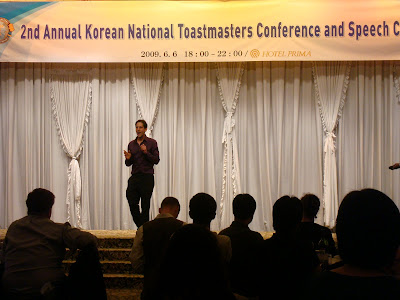 And to wrap up this blog post is Frank Lev from Sincheon Toastmasters. Frank was giving a speech about fashion and personality. He had multiple layers of clothing on and was taking them off as he was describing different aspects of himself. In the end, he was down to his boxer shorts and a singlet. The foregone conclusion was that underneath all the layers of personality we have, is our true selves. But he was told to leave the stage by one of the judges who thought it was a little too much.
He left politely, and I have to say that I disagree with the decision. Taking clothes off while onstage may be a little distasteful, but all you need to do is tell the contestant to put some back on before continuing the speech.
But he wasn't disqualified from the competition and was allowed to finish his speech after the conference ended. The photo above is of him at the end. Good strength of character.

That's all from me this time.

http://www.toastmasters.org/ <- Go to a Toastmasters near you!
Posted by Lee Farrand at 4:48 pm

Hi Lee...
I am scouring the internet from New Zealand at the moment. Looking for job opportunities and first-hand experiences from people currently in Busan.

I'd like to make my way over there in November with a friend and teach English. I know this is all very realistic, but if you had any first hand advice, or schools (private or public) that you personally would recommend getting in touch with I'd be appreciative for any advice you can offer.

Thanks for the interesting blog, i love turtles. Please feel free to check out my blog... not quite as professional though.

Sounds good. Try sending your resume to recruitingcdi@gmail.com I think the guy there is called Tim. Also check out www.teachinkorea.com

Good brief and this post helped me alot in my college assignement. Thank you on your information.