Much of Korea looks the same. If you blindfolded me, spun me around enough times, hit me over the head with an iron bar and dropped me off at a random location, it would take me a long time to work out where I was. And not just because of the head trauma. The main reason is that much of Korea consists of what I like to call 'repeating units of suburbia'. To produce one of these repeating units, one needs a good amount of identical apartment blocks, three hagwons, a dash of Family Marts, a sprinkling of noraebangs and a garnish of kimbap cheonguks. 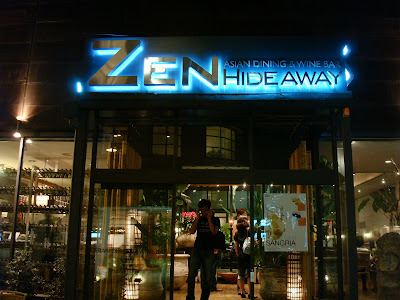 However, contrary to my sweeping generalisations, there do exist a number of rule-breakers. One of these is Gangnam, which looks like what I imagine New York looks like. Another is the more affluent district of Apgujeong, in central Seoul. Apgujeong is full of upmarket shopping and al fresco dining. Last week we popped over there with Kish, who was here for a visit from Dubai.
We ate at the Zen Hideaway, which is a Thai restaurant about 2 kilometres from the subway station. 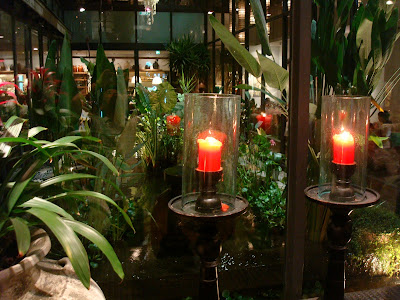 Why did we walk so far in order to dine on Thai food, when one can so easily buy cheap and unsatisfying Thai food from our local Pattaya? Well, because this Thai food was rumoured to be somewhat extraordinary. And it was.
The restaurant is built around a centrepiece of a large indoor garden exhibit, complete with running water and wandering koi. 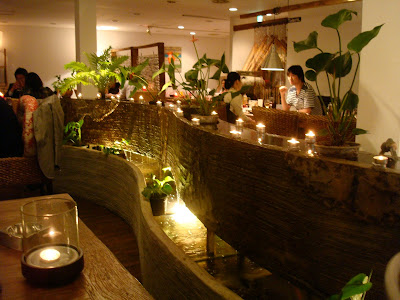 My own feeble attempts at interior design in my dormitory have involved putting the wardrobe where my bed was and putting my bed where my wardrobe was. For anyone interested in a more refined approach to interior design, Zen Hideaway is a worthy example. There is a lot of exotic furniture, candles and running water, which adds to an already classy atmosphere. 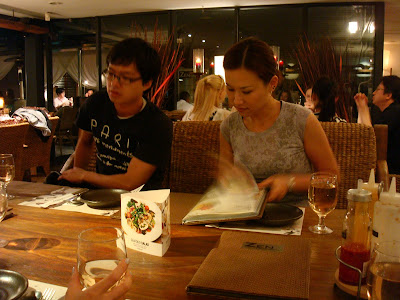 On the left is Jang-Ho, unfortunately bewildered by our overusage of English as the preferred language and on the right is Yulim, our guide who took us on the more scenic route to Zen. 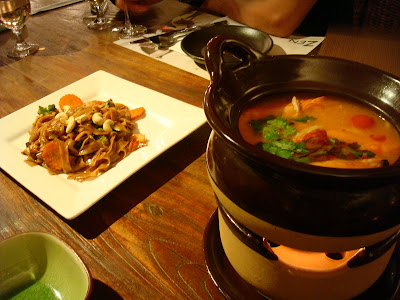 The Zen Hideaway sells a lot of traditional Thai food with Italian influenced main courses. Italian food in general shares a lot of common methods with Asian cooking, so it's never surprising when a good wok-fryer can also churn out a decent spaghetti. In the photo above was a noodle dish, which I chose because it looked like char kway teow, but was unfortunately not as good. But on the right was Tom Yum Goong, which went above and beyond redemption. Sour, but not too sour, spicey yet not too spicey. Very well balanced and one of the first places in Korea I've found that doesn't overcook the prawns. If you ever come here, don't miss this one. 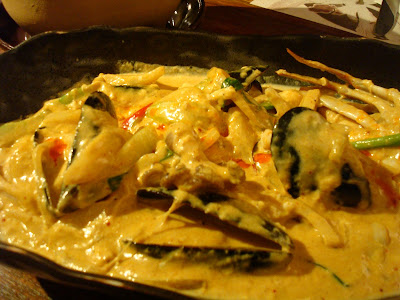 And this was a crab-coconut curry. The sauce was thick and surprisingly subtle in flavour, with hints of peanut. Overwhelmingly good and something I'd order again, even at the expense of not being able to try something new on the menu. 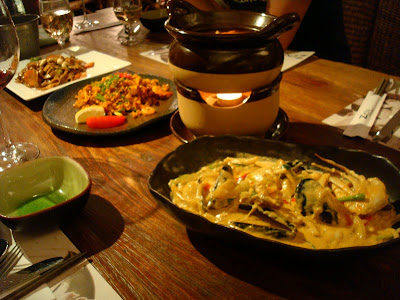 Overall we had 5 dishes which ranged from fairly good to superb examples of true foodism. While a better food blog like Zen Kimchi would no doubt paint a more fitting portrayal of the food here, I nonetheless recommend anyone with enough money and a decent map to seek this place out and try it. The prices were reasonable for a once-in-a-while outing and cost us around W200,000 for 5 people with a good bottle of pinot noir.

Hey Lee, this is Yulim :)
As recommended, your blog is very interesting. Keep up with good work!!

Mmmmm -- that looks amazing! So, more specific directions please. Which exit? Do we need to turn anywhere?!?!

We had difficulty finding it even with the map: http://www.zenhideaway.com/apgujeong/main/main.html
You'll find it eventually (approximately 2 kms from the subway station I think, but we went the long way)

Or you could wait until Zen Kimchi reviews it, and will probably give better directions ^^

Hi Lee ! I'm just wondering whether do you know of any noraebangs with good variety of english songs that you can recommend ?