When I first came to Korea, I was eating Korean barbecue at least three times a week. Contrary to my initial hasty assumptions, one cannot predominantly subsist on meat and leafy vegetables without some degree of inevitable toilet trouble. Since then I've dropped my barbecue intake to about once a month, which has worked a lot better. 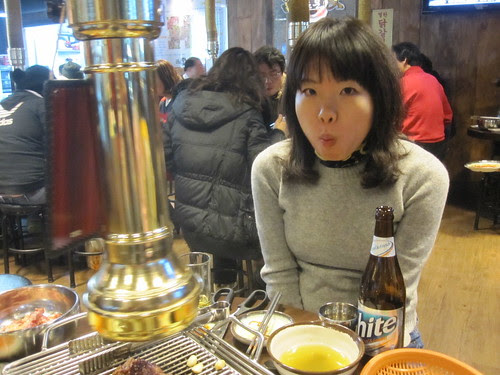 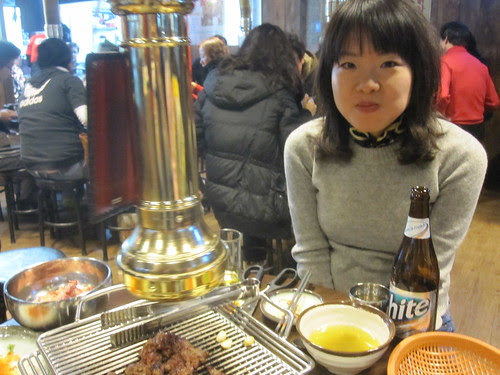 Heather used to complain whenever I posted up a funny looking photo of herself here, but I think she's gradually gotten used to it. One thing we did for the first time on this occasion was to take the excess uncooked meat that we ordered back home with us. The waiter wrapped it up in a bag for us without any fuss. 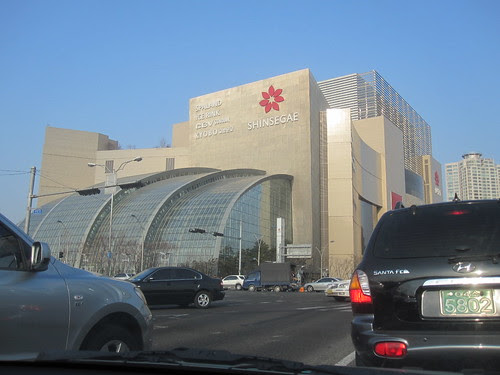 Although we originally planned to visit Busan every month or so, we're only managing to make it a few times per year. Since I was there last, Shinsegae have built the world's largest department store at Centum City, so we went along to have a look.
The claim reminded me of the World's Largest Things that South Australia has. Back home we have the World's Largest Orange, the World's Largest Rocking Horse and the World's Largest Lobster, all of which I have been to and are either inedible or non-functional.

Maybe in the lab one day I can make the World's Largest Plasmid Extraction. But that would only be exciting to a very small number of people. 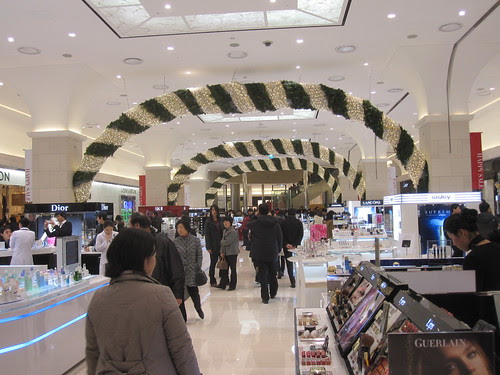 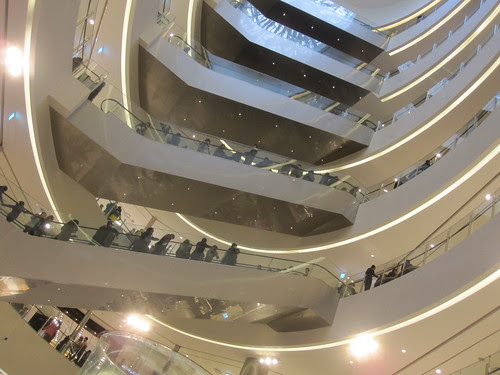 Well, the place is nice, and big. There isn't really a central area that showcases its scale, but you get an idea after you walk around in the different sections. In terms of shopping, I think it's only arbitrarily more convenient than your average department store because there's so much walking to do.
You could buy just about anything here, but how often are you going to need to buy a laptop and a kitchen sink on the same day anyway? 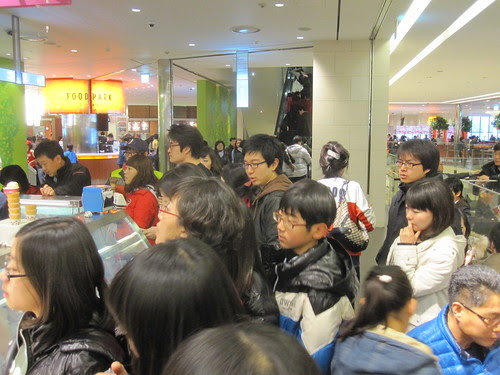 It was fairly crowded that day and even though it was in the middle of winter, the ice cream outlets were packed. You can see Heather and her brother on the right of this photo, waiting patiently. But we eventually gave up and took our ice-cream patronage elsewhere. 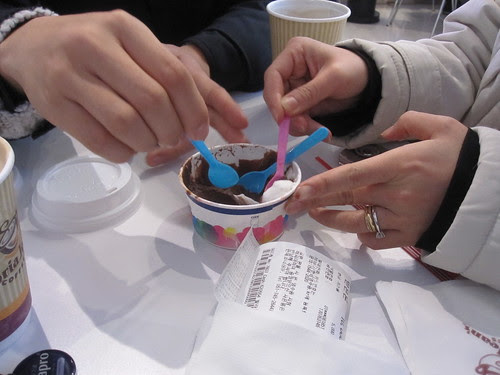 So we found an ice-cream place that didn't have much of a lineup and ordered the 'Grande' size cup to share. With a name like Grande, I was expecting something a little more awe-inspiring than the little scoop we ended up getting. But in the end, we comforted ourselves just knowing that Grande or not, we were still sitting in the World's Largest Department Store. 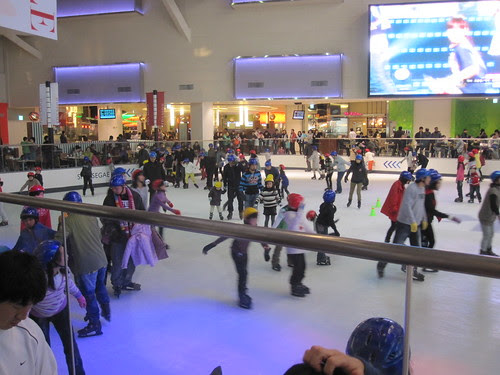 And what better place to enjoy an ice-cream in the middle of winter in the World's Largest Department store, but next to an ice rink? Korean kiddies have to wear swimming caps at every swimming pool and safety helmets at every ice rink.

At least they're not Stackhats. 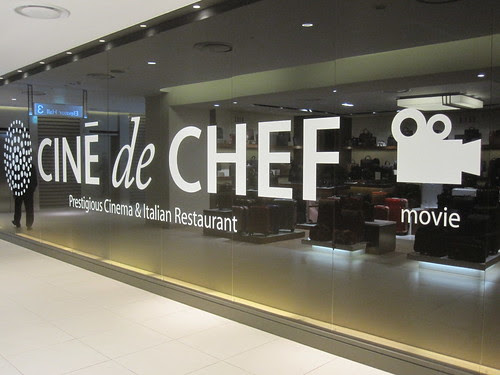 One business concept they're promoting at Shinsegae is called Cine' de Chef. The idea is that you sit in your own private booth and order food like in a restaurant, but there's also a flatscreen TV. If you pay a combined price, you can watch the latest cinema-release movies while you eat.

To me, it seems like they're making the dinner-and-movies idea a little too easy. 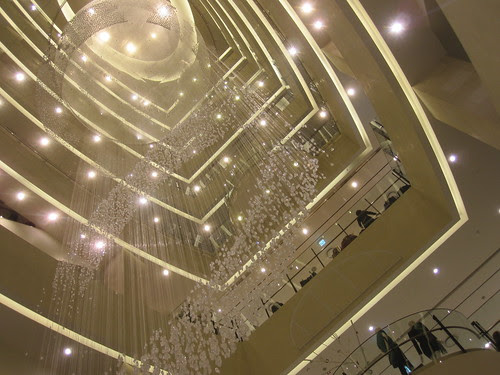 There wasn't anything particularly unique about the whole complex, but the interior design was nice. For people who are sightseeing around Busan, I think you can give it a miss unless you really like shopping. We spent about four hours there and then went back to Heather's place to wind down from all the eye-shopping*.

*Eye-shopping is Konglish for 'window shopping'. 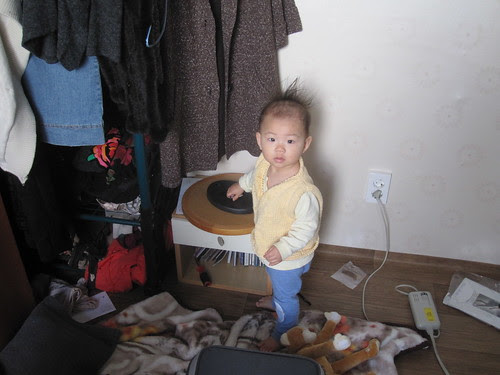 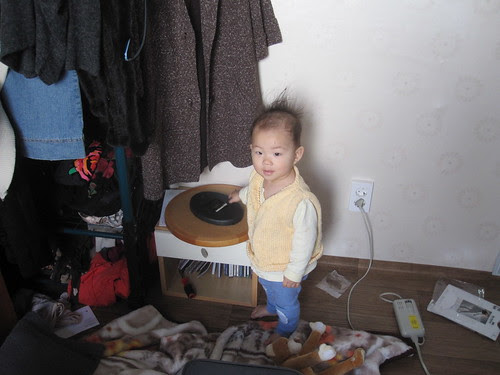 And here's Heather's little niece, Ji-Woo, who somehow learned to walk since I saw her last. Babies grow so quickly, and I still remember her facial expression on the day she was born. It was all wrinkled up and then she gave her first-ever yawn to the world.
Probably a lot more of them to come when she gets older and starts reading Lee's Korea Blog.

I went to the Shinsegae in Gwangju, and one in Yeongdeongpu..

I went to centum city last year, and it was pretty amazing, I believe it's the biggest department store of the world. I love Korea so much and I always had a great time there!