One of the more quaint aspects of life in Korea resides in an elusive variable that I call the 'ajosshi factor'. This intangible resource is difficult to characterise in any scientific sense, but basically exists through the many thousands of Korean ajosshi who call this peninsula Our Country. 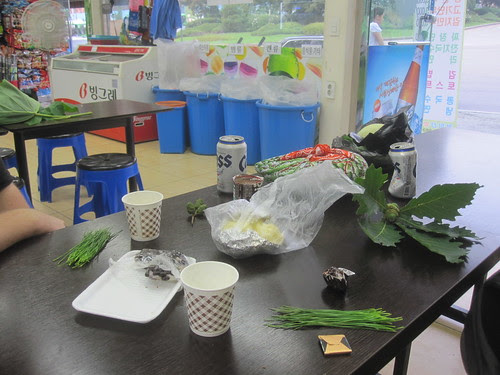 The word ajosshi refers to any middle-aged man. Korean ajosshi have a reputation for occasional usefulness, public drunkenness, homogenous fashion sense and self-serving aloofness. Say you have a small wardrobe to move from the ground floor to your third floor apartment via the elevator. This seemingly straight-forward task becomes exponentially more complex if you request help from a local ajosshi (typically found standing on the side of the road, smoking cheap cigarettes). By requesting his intervention, you have just signed an unwritten contract committing yourself to the full effect of the ajosshi factor.
While helping to move your wardrobe in between frequent stops, head scratching and personal anecdotes, you can expect to be questioned extensively with queries such as:
Why are you moving this wardrobe?
To where are you moving this wardrobe?
To whom does this wardrobe belong?
Where did you say you were moving this wardrobe again?
Why did you purchase such a big wardrobe?
This wardrobe is heavy. Why did you not purchase a lighter wardrobe?
Two hours, three passively inhaled cigarettes and one cup of instant coffee later, and you'll most likely have your wardrobe somewhere in your apartment. 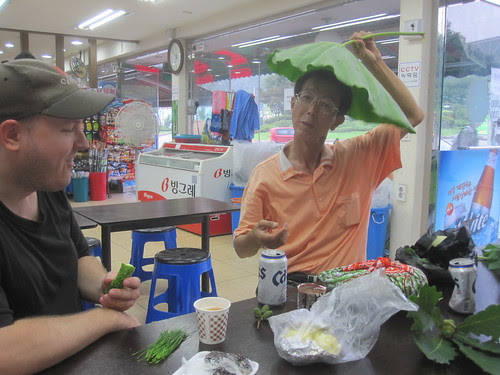 The other day, Patrik and I were sent on a mission by Dr Zhang, of protein chemistry fame, to meet a friend of his arriving from the airport. While Patrik and I were waiting at the bus stop for the friend who never came, we decided to eat ice-cream. Before long, down next to us besat a local ajosshi who asked with a fragrance of makkeoli "Where you are... from? Where... you are from?"
Patrik took an instant liking to him, but me, the more street-wisened among us (or so I thought), decided the most appropriate strategy would be to not feed this monkey too many bananas and hope he hops off to another tree. So I attempted to continue the recently interrupted small-talk with Patrik and politely ignore our newly acquired inquisitive macaque.

But the ajosshi was determinedly fascinated by the both of us, and on his recent drunken hiking expedition had collected botanical specimens that he insisted on showing us. 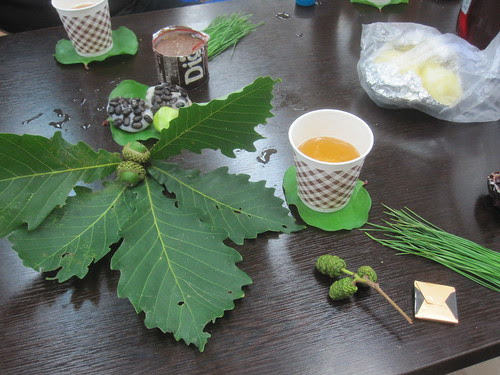 This rather humble spread is a portion of his findings, which he ended up leaving on the table upon our eventual departure. Note the drink coasters of leaf origin that he hospitably set up for us, and the inedible acorns that he surmised, 'may be edible, who knows?'
He turned out to be quite pleasant company in the end, and bought us beer and snacks while we waited. 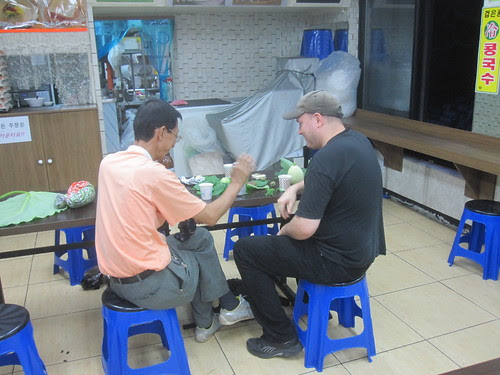 If you look out the window, you'll notice that night had fallen by this time. We ended up spending a good four hours with our new ajosshi friend, getting a little tipsy and discussing heavy topics with a mix of hopelessly broken English and only slightly better Korean. Our combined intellect concluded that Sweden, Australia and Korea all have many similarities, and that the demise of calligraphy as an art form is a tragedy.
Late in the night, we said our farewells and said we'd meet up again, a promise we both knew we'd probably never keep.
After this chance meeting, I would have to say that the ajosshi factor is a fascinating phenomena, and should be further investigated with reckless abandon. 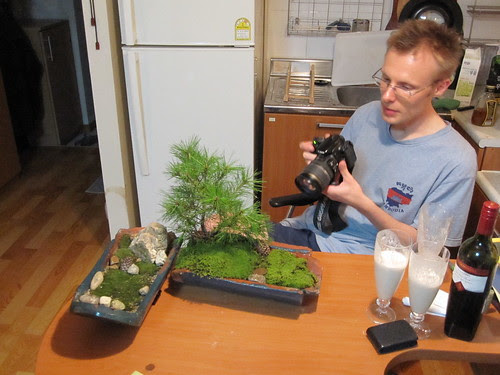 Here's our new campus ajosshi friend, Art Michalak, a Polish American with an interest in physics and dSLR photography. Art called us down to his flat one night and made whiskey-banana-yoghurt smoothies. 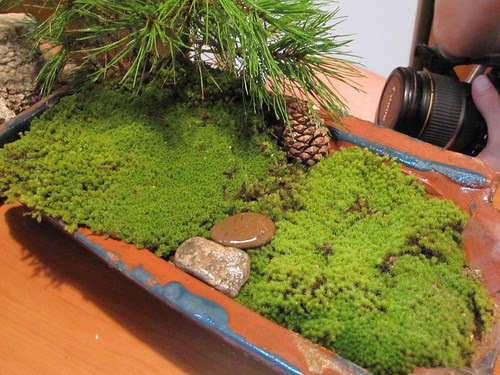 Art is a fellow bryology enthusiast, and has been collecting moss from around Korea to arrange in compact and aesthetically pleasing displays. This was his first attempt at a mossarium, which I pointed out was technically more of a 'moss pot' than a true mossarium. But full points for the river stones and pinecone.
I'm becoming of the opinion that everyone should have a pinecone within arm's reach at all times. 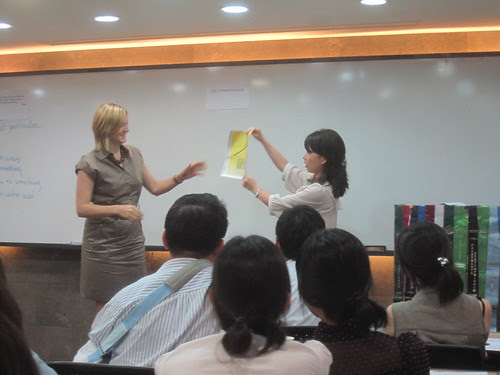 And here's Heather, presenting Table Topics at the South River Toastmasters. She brought along some movie posters and invited audience members to give mock promotions for them. Agnes did a good job of selling Kill Bill. 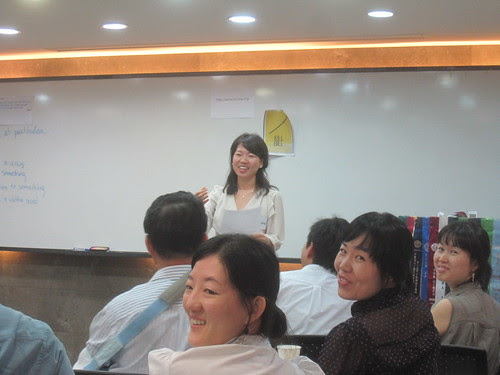 It went pretty well. Heather is going fine in general, but gets tired more quickly these days. She's sleeping a lot, and enjoys eating myolchi fish, honey-on-toast and ice-cream.
The three agasshis turning their heads in the photo above are Sunny, Alice and Christine. They're very lovely ladies, and enthusiastic members of the SRTM community. You should come along for one of our meetings someday.
There'll be a new post coming soon. Have a good week everyone.
Posted by Lee Farrand at 9:49 pm

i was a toastmaster's member back in the US. it seems there are a lot of koreans at this toastmasters. is it still beneficial for native speakers?

Anyone who wears leaves on their head is a winner in my book...

I once flashed a pair of jumper cables at an ajosshi parked in front of my battery-dead car in the middle of a frigid Seoul winter, indicating with my clacking and helpless look the universal sign for needing a jump.

When he ignored me by sliding further behind his sports newspaper, I knocked on his car door, showing him the jumper cables again, to which he begrudgingly cracked his window open and responded annoyingly:
"필요 없어!" (I don't need it!)

This is the typical kind of ajosshi behavior I ran into when I was in Korea, which fits in perfectly with the "self-serving aloofness" you described. However, the ajosshi you ran into seems to be more of the sloshed variety -- as well as a local parasite and resident expert at the fine art of complete time suckage.

Hi Ron, sure... Toastmasters here is fine for native speakers.

I forgot the translations on my blog again, but it's more or less fixed by yours truly now ^^;

``The word ajosshi refers to any middle-aged man. Korean ajosshi have a reputation for occasional usefulness, public drunkenness.''
Master Farrand, I had a good laugh reading all of it! It is funny what find thoughts and beautiful language a clever man like yourself could weave round an ordinary subject!

Lee and Heather, Great news about baby on the way. It is the best thing you will ever do!! I am also a fan of bridge pylons; have you seen the ones under the 'subway'/expressway along Dorim Stream, down at Sinlim station? There is a precarious walkway slung underneath, so you can get up close and friendly with all that concrete.
Damien

The description of an "ajosshi" made me of some reason think of my brother... (Sorry, Patrik.) ;)