When I was a boy, our old man used to take us out jogging. Along with other compulsory components of being a Farrand, which included weeding the garden, learning German and picking up the dog poop, jogging was invariably un-looked-forward to in our younger years.
Kids being kids, we had overflowing energy for everything, except anything that was good for us. 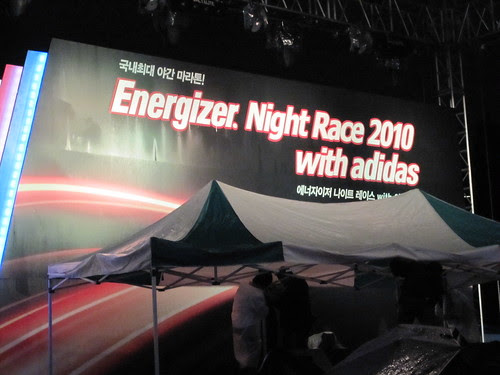 In a classic parental see-I-told-you-so revelation I've had in my later years, I've become pretty sure that long distance running in my youth had lasting benefits. Such benefits include an affinity towards exercise in general, a true appreciation for the simple ecstasy of rest and the realization that in life, you shouldn't give up just because it's convenient to do so. 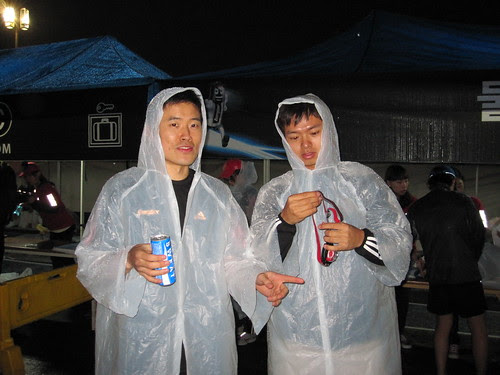 These days I find myself lacking free time for anything that hasn't been signed up and paid for, so luckily Heather did just that for the Energizer Night Race at Seoul Children's Park. In the photo above is Jang-Ho and me, suited up in our complimentary disposable raincoats before the 10km run. 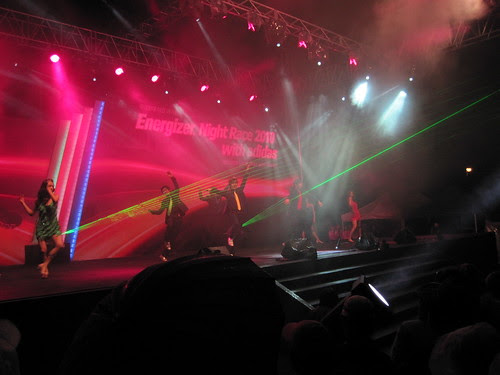 Some bright spark on the Board of Ideas in the Night Race Organising Taskforce evidently thought it appropriate to energise the audience with a dance team. 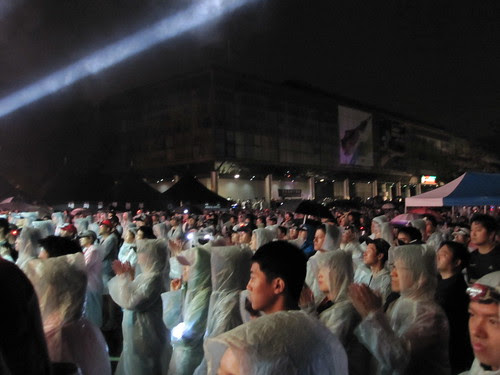 Despite the 5mW green lasers, artificial smoke, searchlights and loud thumping music, Korea collectively responded by staring quietly at the concert in disposable raincoats, before hesitantly clapping at the end of the ordeal.
Having just watched Fear and Loathing in Last Vegas for the first time last night, I think that Korea would evolve considerably from a substance-inspired passive social rebellion against the forces of old. But what I think is good for Korea and what the Koreans think is good, are two quite different matters. 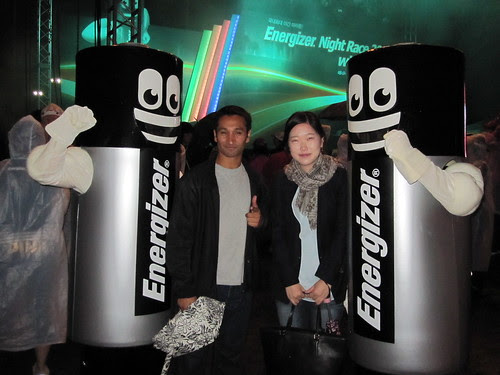 We met up with Kish, who is currently traveling the world via legs and backpack. He in turn brought along his friend Ji-Eun, who he met in Seville a couple of months ago. Kish is a fascinating guy, and one of the only people I've known who is genuinely forlorn about not being able to visit Burma. 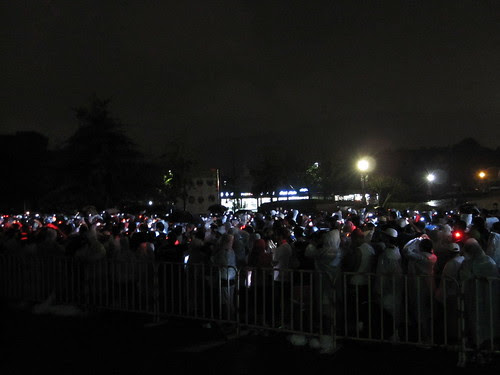 The race started without much ado, and off we galloped into the drizzling darkness of the park. Ten minutes into the race, with rain intensifying and thighs burning, something deep inside me wondered why I had agreed to partake in such madness. And then my other self-conversational half replied that it was to remind myself the life lesson that we shouldn't give up on something just because it's convenient to do so.
In the end, I finished the race with a time of 52:57, which wasn't bad by my standards. But Jang-Ho beat me to the finish line by 12 seconds. I came home exhausted, and defeated in the way that only comes with being defeated by a younger family member.

But ego restoration is due this coming weekend, at the Nike 'We Run Seoul' event. 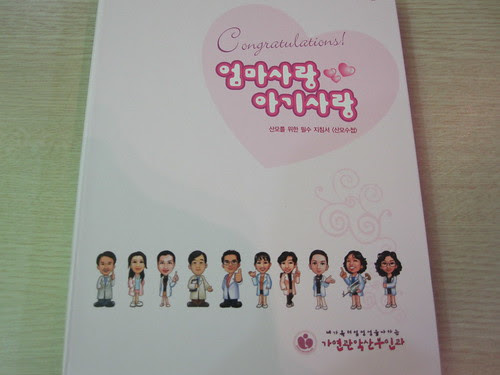 This is a progress diary that our maternity clinic gave us. Contained within are our ultrasound photos and various other morsels of information. 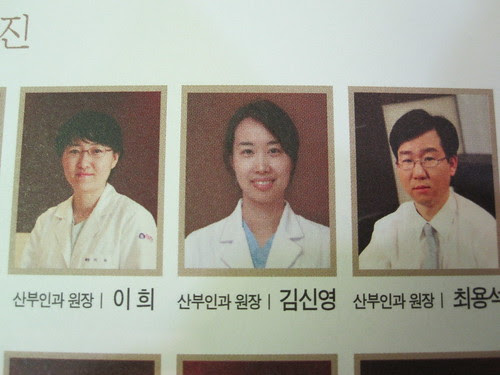 In the middle photo is our gynaecologist, Dr Kim. She's quite friendly to us and Heather likes her. In the photo on the right is a male gynaecologist. Heather tells me that males in this particular profession are generally avoided by Korean clients due to the sensitivity of the issues at hand. My personal suggestion is that if he had a nice big smile like our doctor, clients may be more forthcoming.
But I guess a male gynaecologist needs to be careful about not overdoing any kind of facial expression in their profile pic. 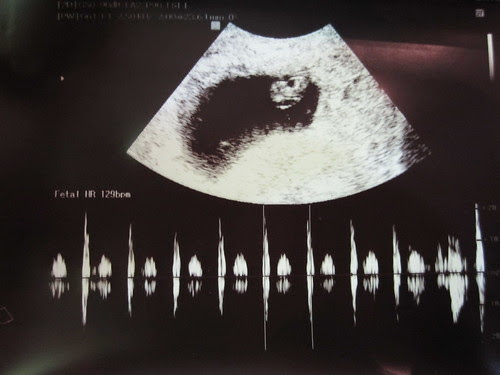 The small mass in Heather's kidney-shaped womb is our little bundle of wonder. Dr Kim advised us to think of a name to refer to it by. The name had to be whimsical, and neither male nor female. After a lot of suggestions of mine that Heather didn't like, we settled on the name '빅뱅이' (big baengy). It comes from the TV show that we both enjoy, and from my perspective, represents such a tiny singularity having enormous future repercussions. 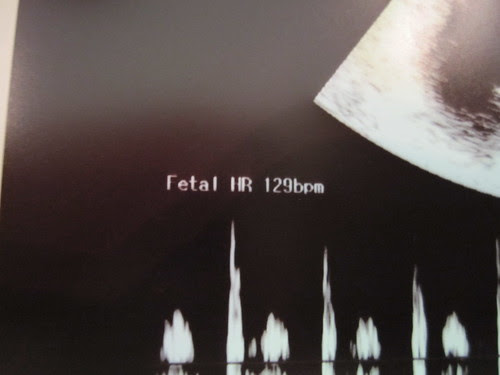 One thing I didn't know was that fetal heart rate is much faster than you'd expect. Ian's sister, Una Kim, told me last night that your heartbeat in life starts very fast, and then slows down over the rest of your life. I found that to be a very interesting thing. 빅뱅이's heart is currently belting away at 129bpm.
I think 빅뱅이 is going to turn out to be a hardcore techno fan. That's great news for me. 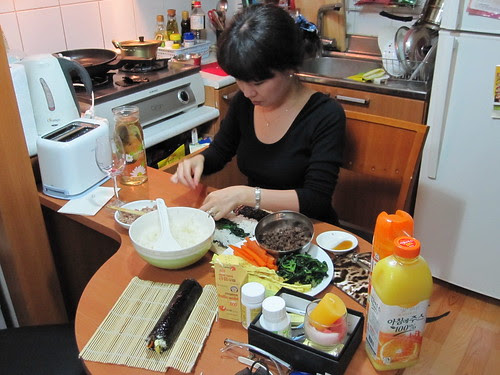 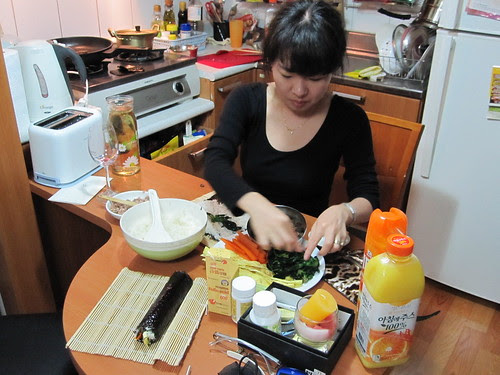 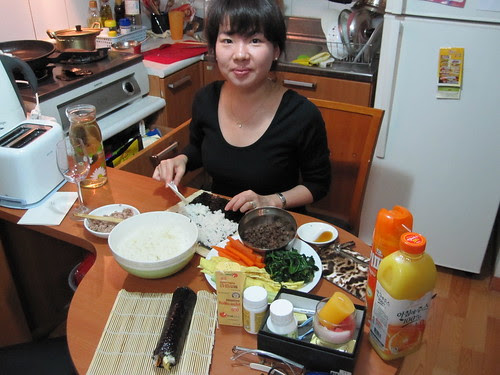 And here's the Lee's Korea Blog 'mother-to-be' of-the-year award winner, Heather, making 소고기 kimbap for us.
Kimbap is the quintessential Korean pseudomeal, aesthetically pleasing and nutritionally adequate. 99% of our yearly kimbap intake is via kimbap cheonguk, with the remainder manufactured by Mrs Farrand in the comfort and relative inconvenience of our own kitchen. 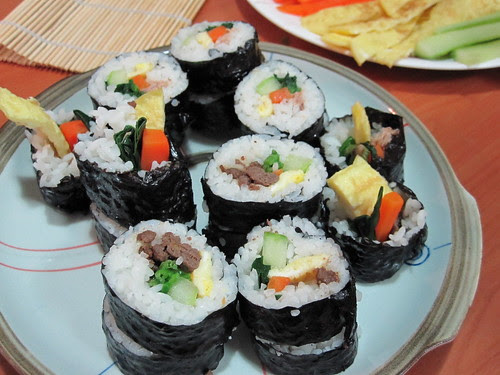 This is the finished product, which we consumed with egg-drop soup. The shared preparation of food and it's consumption, I think, deserves more focus in the lives of today's busy cosmopolites. I for one, certainly enjoy sharing our food happenings with you all. If you're really into K-dining though, be sure to check out what's happening at Joe's site over at ZenKimchi.
Today we're off to the Hangang Park, for the We Run Seoul event.
Will report back, post-recovery. See you soon.
Posted by Lee Farrand at 12:50 pm

Hi Lee.. Are you a Korean ? I am Indonesian but don't know why I am completely in love with South Korea ;)

By the way.. your posting is interesting, keep up the good work :)

nice to know you and you blog

Hello Funny, I'm a Korean adoptee. Thanks for the comments.

oh i see :) so.. how long have you been in Korea? :) your english is fluent hihi.. how about your Korean ? :) I wish i could visit Korea someday

4 years now, my Korean isn't very good, but I go to night classes :)

yeah.. i wish to visit korea also someday.. hi.. I'm from Malaysia. I start to know about Korea and their culture after watching a lot.. i mean A LOT of korean drama with my wife. hehe.. She's addicted to Korean drama. The latest is Sungkyunkwan Scandal. And also.. nice articel in your blog.. Let's us me friend.. FUNNY, kita kawan juga ya..

Hi Dino, nice to meet you

so Lee, u said u're Korean adoptee.. is that means you are from another country? anyway, how its feel to be one of the korean family.. great isn't it..