Munich in a Nutshell

A habit this young blogger has cultivated over the years is to work odd jobs, in addition to a primary occupation. It's nice to have extra cash flow, and staying busy can be a good thing.

When I first arrived in Busan in 2006, nearly all of the casual work I did was tutoring English to students. After 6 years here, things have changed a bit. Anthony and I have been working as part-timers for the Dong-A University Hospital Clinical Trial Center since April 2011. The center is in Busan and I live in Seoul, with our work revolving around a mix of consulting, document preparation and business development. Most of the work gets done by email.

Not long ago, we were sent on a business trip to Munich, Germany. 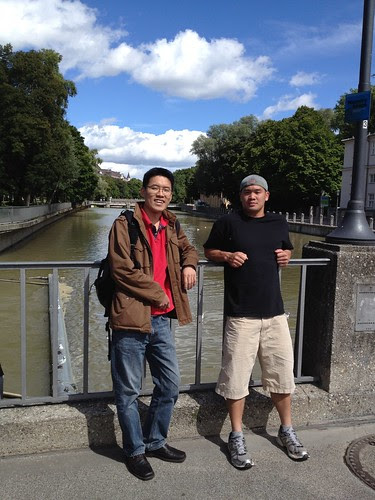 We've learned a lot on the job, and traveling is one of the perks. I can only travel when my lab work is going well, but Anthony has been going overseas every few months. Our main task is to build relationships with organisations related to clinical science, and learn how things happen in different parts of the world.

Before new medicines can be used in hospitals or pharmacies, they first need to be tested on human subjects. These tests occur in clinical trials, which are complicated events that have spawned a large industry to support them. Hospitals and private companies will set up clinical trial centers to win contracts that are often sponsored by pharmaceutical companies. These centers are a blend of research and business, and our role is to focus more on the business aspects. 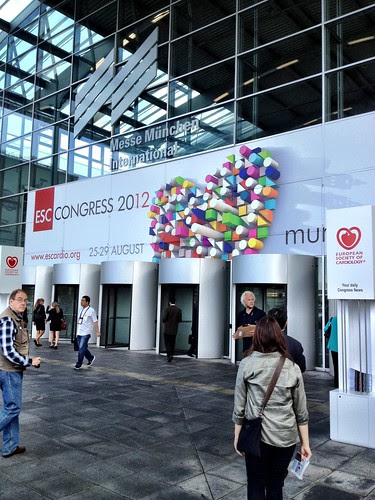 Our trip to Munich coincided with the European Society of Cardiology conference, one of the biggest such events in the world. There were 30,000 heart doctors from all over the world, clamoring around in a refurbished aircraft hangar. 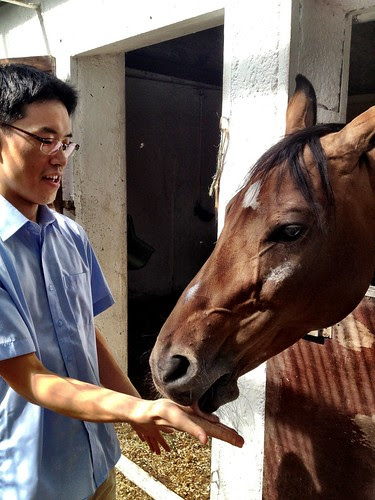 We attended a lot of meetings and completed our work objectives, but I only took photos during our downtime. We spent ten days in Munich, and were given generous free time to roam the city. Dr Kim's daughter, Sue, accompanied us. She's fond of horses, so we tracked down a horseriding club while we were there. 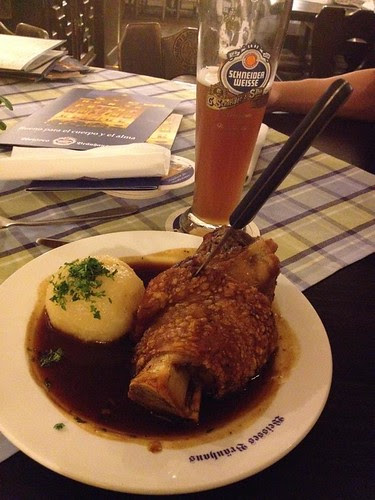 The food in Munich was a welcome change from the usual cafeteria lunches in Seoul. Quite a few times we ate at a Brauhaus, the collective name for local pubs that sell delicious beer and huge chunks of meat. In the photo above is a great local specialty dish called axen, which I imagine was often devoured by hordes of ravenous Visigoths in the past. It's baked pork with crackling and gravy; a little salty and very good with the white beers they sell.

It was strange, but nice to eat three meals a day without rice again. 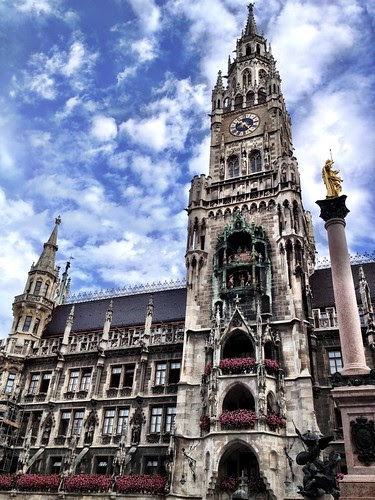 As well as the food and beer, we were similarly stunned by the richness of the city architecture. I'd never been to Europe before, and this gothic building that watches over Marienplatz seemed to speak volumes about the old world. How humans could design and build such a thing amazes me. 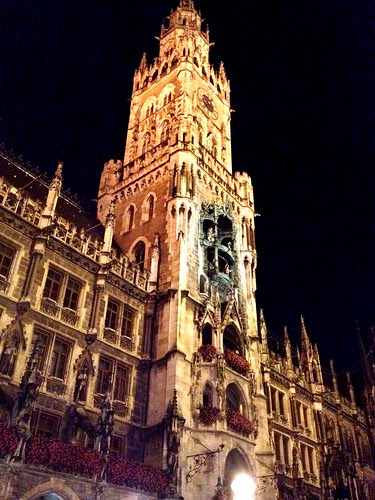 It looks even more daunting at night. I would expect organ music to go quite well with it. 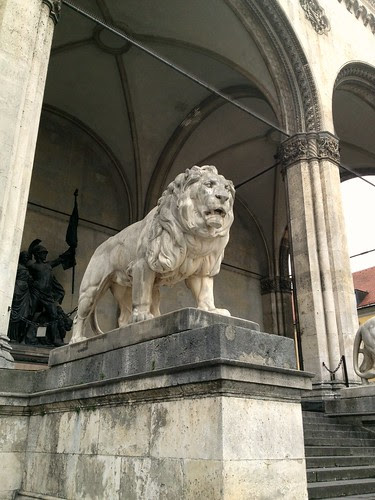 I can't say I know a lot about carving things out of stone. But there were many fine-looking lions in Munich. 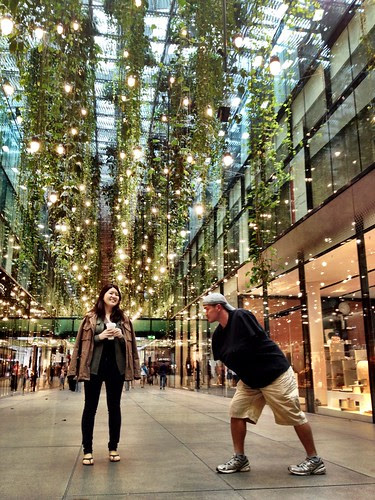 Here's Sue and Anthony, hanging out in one of the modern shopping districts in central Munich. Prices for clothes and food in Munich are slightly higher than in Korea. 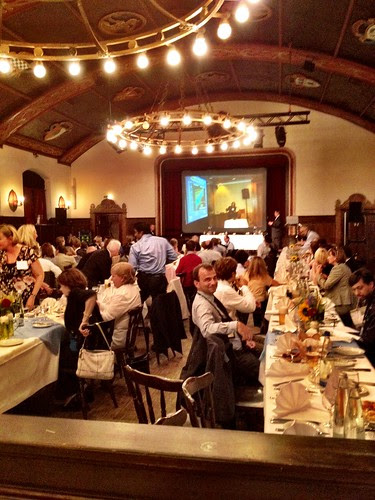 We received an invitation to a celebratory dinner for the completion of a large clinical trial called Trilogy-ACS, headed by Duke University.

The trial itself involved thousands of volunteers and was focused on comparing two drugs that inhibit blood clotting, for application in heart surgery. 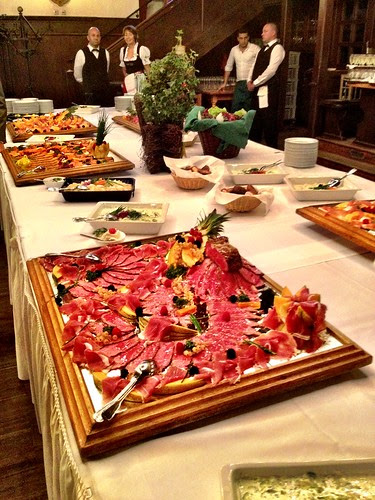 It was a lavish affair with food, beer and wine flowing freely. In Germany, I ate so much meat that I eventually had a continuous aura of meatiness emanating from my body.

Meatify (verb): To make a dish even meatier than normal.
Ex: Refrain from adding more cured meats to that plate, lest you meatify it beyond recognition. 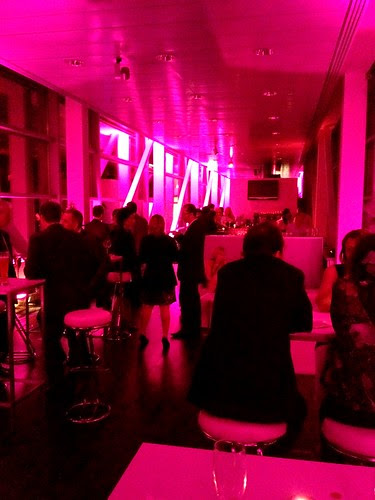 Later that same night we were invited to the launch of a new company. It was a cocktail party held at the Munich Skybar.

Quite nice, although overwhelmingly pink. 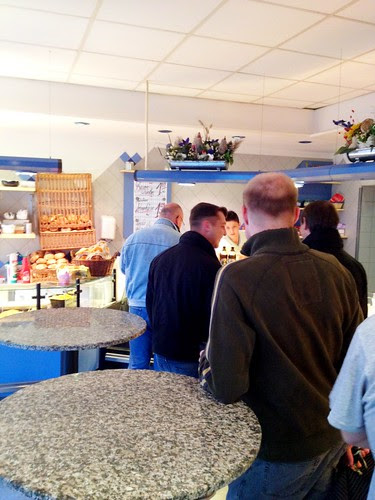 It's hard to find good breakfast restaurants in Korea. The traditional Korean breakfast is largely indistinguishable from other meals of the day; there's soup, and there's rice.

In Germany, patrons line up at their local delicatessen to get their breakfast. I like that. 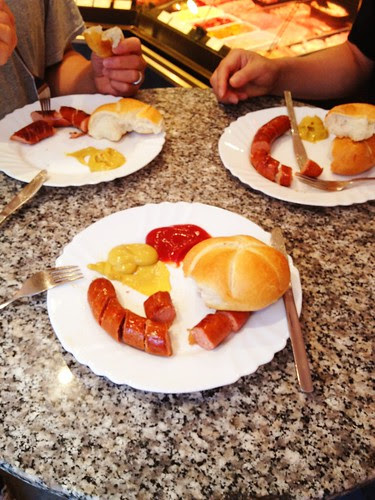 Bread and sausage make a good breakfast only when both bread and sausage are delicious. And indeed they always were. Even the mustard and tomato sauce were good.
German bread is more than just bread. I don't know how that's possible, but it's incredibly bready bread. In a good way.

If there was a bread heaven, it would be full of German bakers. 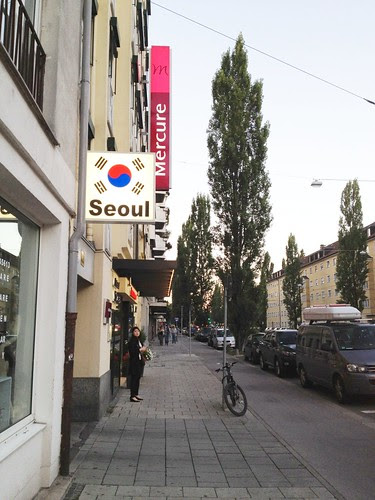 One peculiarity often reported about some Korean people when traveling is a lingering addiction to Korean food. This has caused all sorts of odd situations, like stories of crowds of ajumma eating Shin ramyeon in front of the Eiffel Tower. 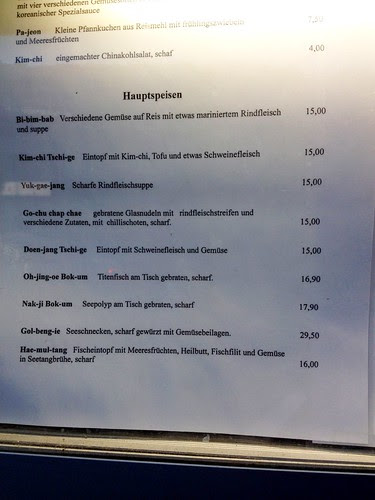 Korean food in Germany is very similar to that found in Korea, but it's described in much more colourful language. For example, kimchi jiggae is "Eintopf mit Kim-chi, Tofu und etwas Schweinefleisch." 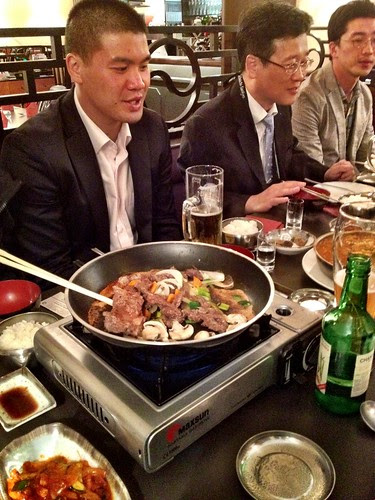 For our little band of Koreans, the Korean food addiction manifested itself in the desire to seek out the only Korean restaurant in Munich, to eat dinner at one night.

We even drank soju. 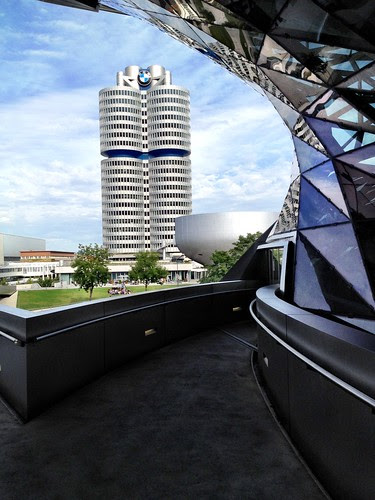 In Germany, nearly everyone drives a BMW, a Volkswagen, a Mercedes or an Audi. I know they're all German, but I imagined they would be too expensive for the layperson. I guess there's some kind of secret German discount.

The BMW museum building is designed to resemble the pistons of a car engine. 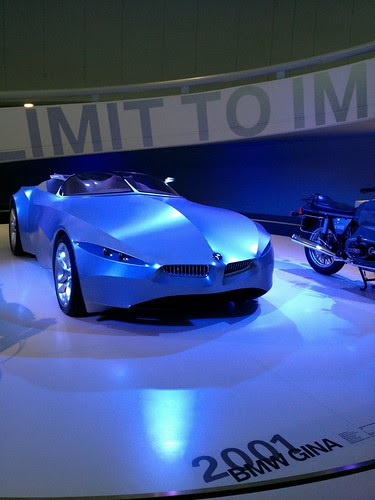 This is a concept car made from material. The material moves around and can hide and reveal things like the headlights. 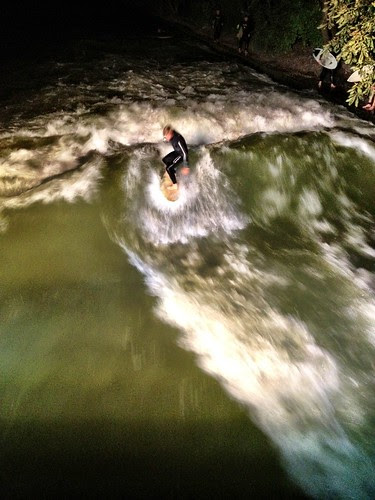 One of the cool things we saw was river surfing. In Munich, they have bridges that funnel water quite swiftly.


Locals bring surfboards and surf on them, similar to a flowrider. 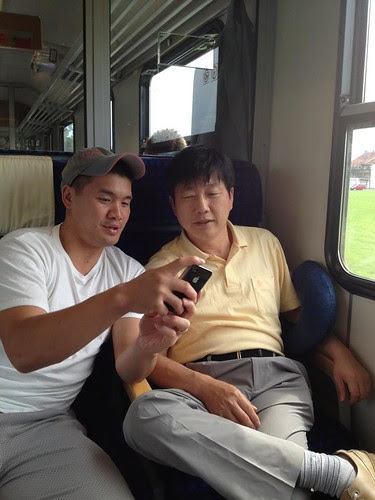 Here's Anthony teaching Dr Kim how to play Angry Birds. Overseas, Anthony is a Wi-fi addict and can often be seen holding his phone up in the air, attempting to catch passing morsels of free connectivity. He can detect a Wi-fi hotspot from a distance of ten metres, using his enhanced sense of smell. 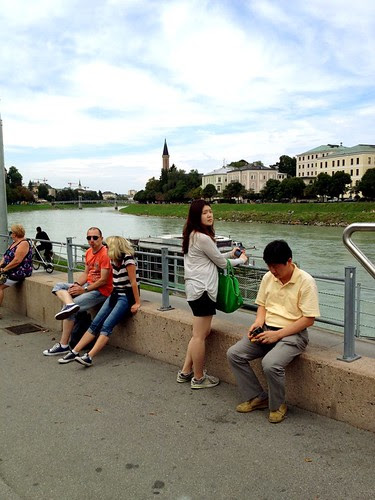 Dr Kim thought it would be pleasant for us to visit Salzburg in Austria. So we took the ICE train from Munich Haupfbahnhof. 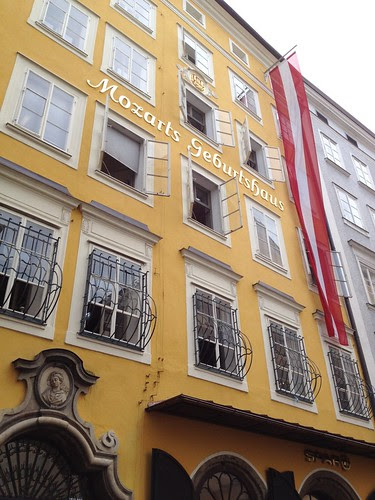 Salzburg is the birthplace of Mozart. It is not possible to visit Salzburg and not be made aware of this. The tour buses play Mozart, all the maps point to places where Mozart frequented, and Mozart merchandising is in full swing.

When we left, I felt I had been forever and irreversibly tethered to the ethereal omnipresence of Mozart. 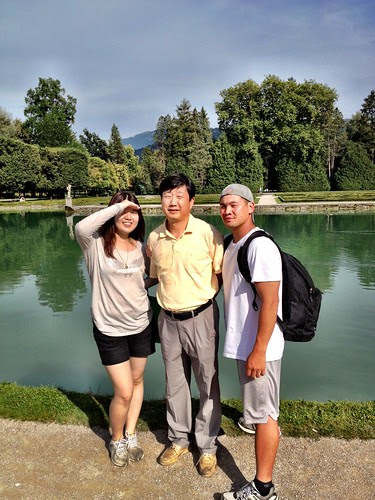 Here are some happy campers in the gardens of an old king from a bygone era. 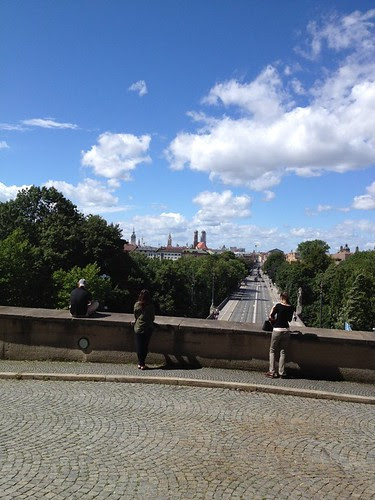 Overall we had a great time in Munich. It was nice to have the excitement of being in a new corner of the world.
We have some more plans in the works for 2013, as well as my thesis defense and a second baby on the way. Looks like it will be another busy year.

Here's hoping that it will be a prosperous one for all of us.

Wow! Looks like you all had a great time. Oh, what I would give to visit Germany again. I lived there for 8 years of my life, and I loved it!

The bread is definitely something else. It's like Korea's equivalent to rice. It's prepared fresh daily, and you're guaranteed to see it placed somewhere on the table at all times. The salami and cheese sold in the local bakeries are my favorite! (Can't forget that good beer as well.)

Great pictures! Thank you for sharing your trip with us. :)

I'd tell you to "Stay busy," but it seems you've got that covered.

Thanks for the comments!

Yes, we grew quite fond of our local Tengelmann's, our trusty dispenser of cold meats and cheeses.

Loved Munich and was lucky enough to live there for a while. Several of my colleagues are Münchner, and I was really envious when they all flew home for Christmas.
If you're missing that good German bread, you might be happy to know that there are a couple of German bakeries in Itaewon that have German/Austrian bakers and as such are approved by my very discriminating colleagues at the German School in Seoul..; )

Wow, that looks like a fun trip, especially considering that it was a business trip. I'm jealous of your bready bread experience. And as usual, I'm impressed with your workiness. This just goes to show that taking on extra work can pay off in fun ways.