What We're Eating in Seoul

Unless I'm vastly mistaken, our small family of three remain the only representation of the Farrand tribe residing on the Korean peninsula. However, a non-zero possibility also exists that we are the initial flashpoint of a future mighty Farrand empire that will eventually spread from Busan to Northern Manchuria, enslaving all members of the Lee, Kim and Park families. As such, I thought it timely to create this recording of our daily degustations.

Just in case our descendants of the future find pertinent to ask: "Which nutritional substances fuelled our imperialistic origins?" 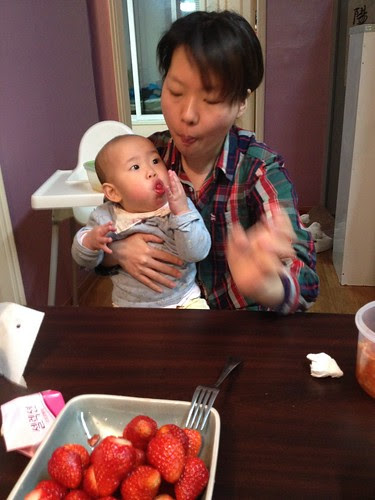 To which I answer: Strawberries.

If indeed a substance in strawberries is later identified that leads to imperialistic behaviour, let the record state that I'm not to blame. Both Baengy and Mother Farrand eat them quite often. Their modus operandi is to rinse a bowl of strawberries, sit on a chair together, and consume them slowly and savouringly.

I'm more of a banana man myself. 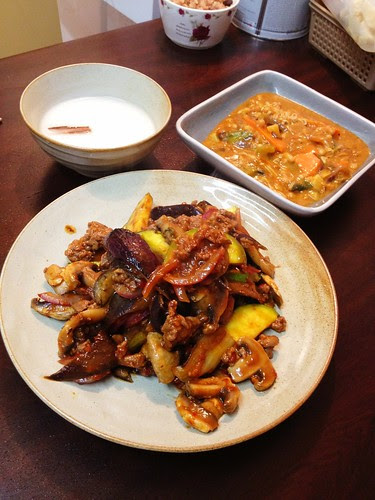 This old cook once new a trick or two, but now he only remembers one. That's to find out what's in the fridge, chop it into sections and fry it with whatever condiments can be redeemed from our aging collection beneath the stove. Luckily the Farrand ladies are not fussy eaters.

In the photo above is an impromptu eggplant stirfry, an old lentil curry, and a bowl of makkeolli with a cinnamon stick in it. Not too bad for a household that spends the majority of its budget on babywear. 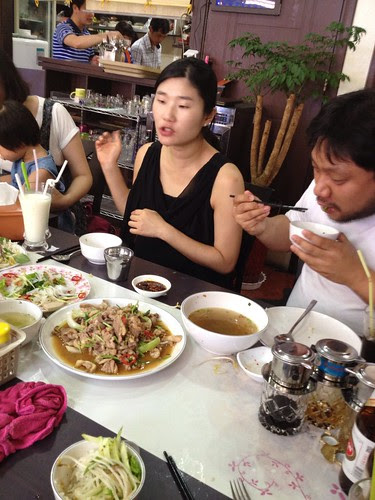 Our allies of the Lim tribe joined us for an expedition to Ansan quite some time ago. James is a self-described fan of food and his heartbeat quickens with any mention of deliciousness. For James, trains of deep thought can be quickly corrupted with a simple mention of the words "large juicy burger."

Hypothetical conversation
James: "So that's why I was having a dilemma about whether to invest my savings in a balanced portfolio or put them towards a comprehensive life insurance plan."
Lee: "That's fascinating. Nearly as fascinating as large juicy burgers."
James: "But you know, insurance can be.... mmm... burrrrgers." 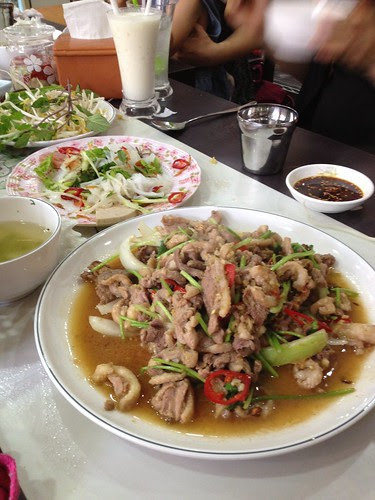 We stopped by at the trusty Dieu Hien Quan, one of few locations in the Republic that serve Vietnamese food without pickled onions. In the photo above is the lemongrass duck, which we ingested along with cold rolls and the mandatory phở. 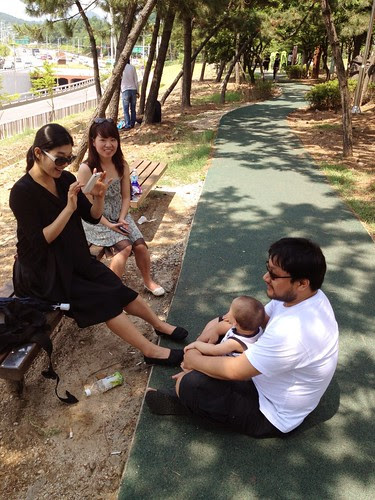 After that it was time for a walk in the park. Which, as the idiom quite rightly suggests, was a very easy thing to do. 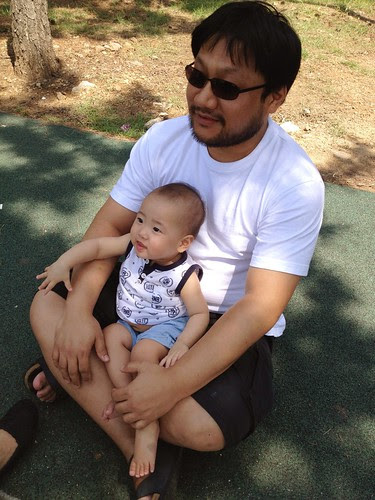 Baengy had a nice time sitting on James's lap. Brings a whole new perspective to the word 'chairman'.

After milling around lazily in our fine food-induced digestive delirium, I went shopping for the Ansan Essentials: tumeric, and those shrimp-flavoured instant noodles from Thailand. 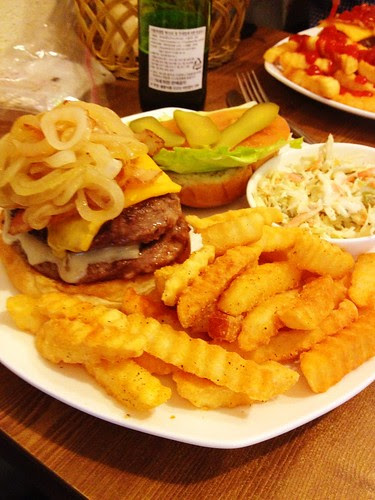 Back in Seoul we've been keeping to our bi-annual scheduled visits to Chili King. The burgers here fulfill the two requirements of every respectable burger:
1) Big, and
2) Good

To avoid burger dismay, I now lurk within the shadows of burger veterans on Facebook's Burger Lovers Seoul group. I gorge myself on the endlessly fascinating conjecture about what makes a burger deserving of praise.

Little did I know that some burgers are worthy of knighthood. 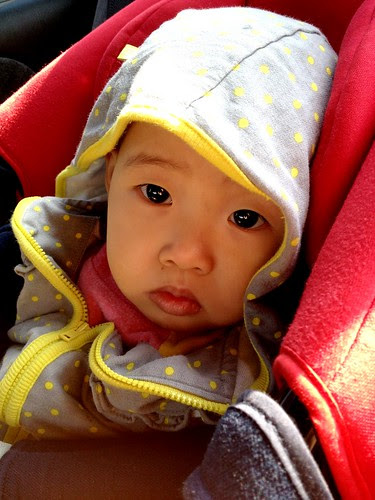 We also tried something new at Steve's house, a cookoff with couples and children. On the way there, Baengy was staring at me like this while sitting in her babyseat. Sometimes she does that. 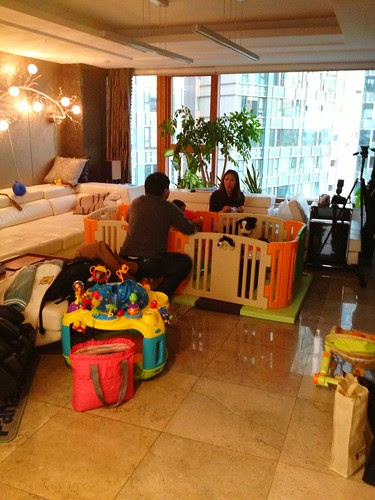 Most people would be wary of hosting any kind of event that simultaneously involves couples and babies, and exceeds 6 pax. However, such people are not likely to be in possession of the largest house in the Korean hemisphere. Which Steve is.

The luxuriousness of Steve's aircraft hangar can be summarised by mentioning a single feature in the bathroom: Magnetic Soap.

It hangs from a rod above the sink and can be pulled down, as opposed to the pesky soaps that we barbarian folk use, which requires us to pick up the soap. 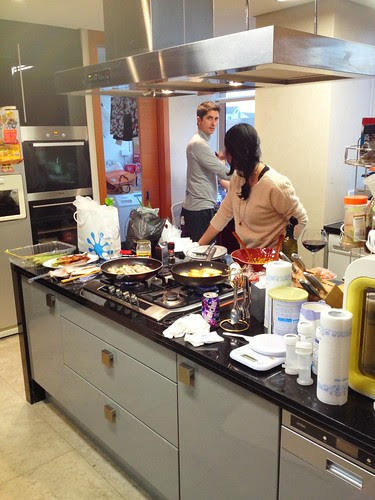 Within the masterchef kitchen, amenities previously unheard of quickly highlighted the unsophisticated among us. For instance, many seconds I spent trying to operate the faucet, only to be kindly told that the faucet is operated by the hidden foot pedal. But of course.

I didn't dare mention that I had never seen a household yoghurt maker. 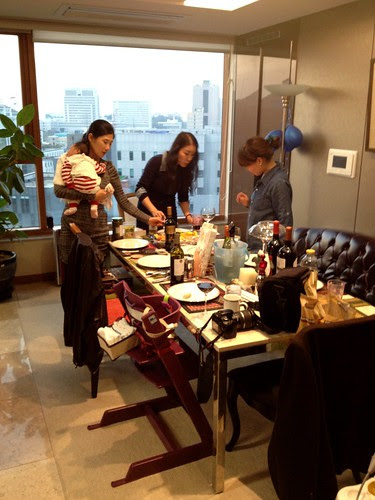 These sorts of gatherings are a good opportunity for our wives to catch up and pour forth their deluges of chatting, carefully stored since last meeting. 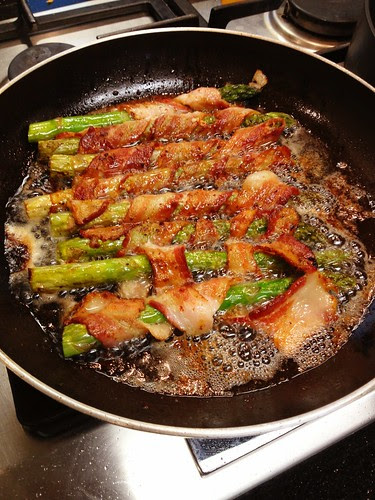 Steve has single-handedly created a dish I call the Cardiologist's Nightmare, consisting solely of fried asparagus and bacon. Luckily we had enough red wine to hopefully invoke the French Paradox. 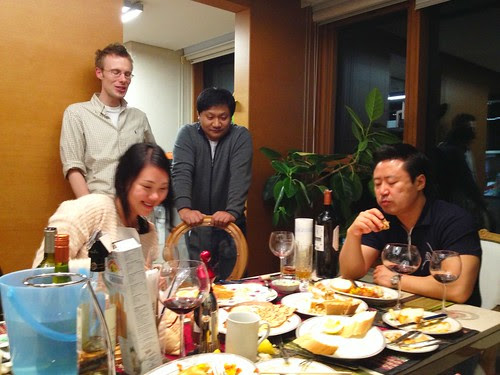 That's Steve sitting on the right. The man of the house, deliberating on the day's earnings.

After slowly sampling each dish and chewing carefully, he emitted a number of happy grunts, and we all breathed a sigh of relief as the night turned out to be a modest success. 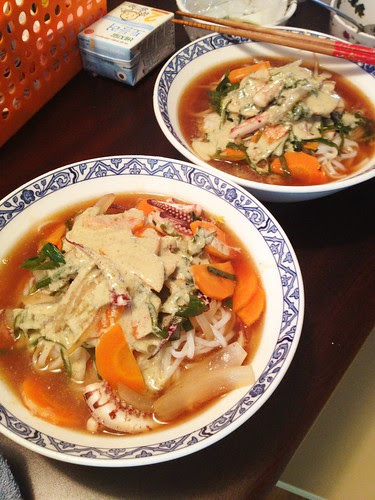 Many years ago, the first dish I ever cooked for Heather was a noodle soup. It must have been fairly good, because we eventually got married. Back in those days, I was fresh out of the kitchens of the Casuarina Malaysian Restaurant, and could whip one up in ten seconds flat. These days my hands are a little slower off the mark, and I sometimes forget to add important things. Like water.

But the ones in the photo above turned out pretty good. Here's a laksa I made on the following weekend. Laksa is quite possibly my favourite dish. 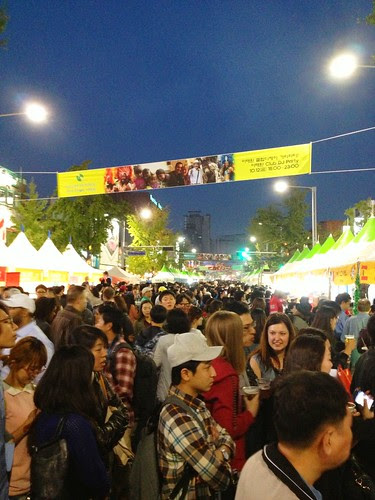 Itaewon holds an annual international food festival, and this year we chose to brave the masses. Into the thick of it we went, with me pushing Baengy out in front with the stroller, and Heather following immediately behind.

We, the Farrand Tribe of Korea, like to travel in single file - so as to hide our numbers when walking in the sand. 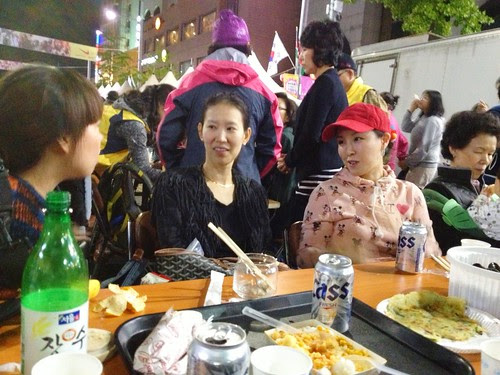 Even though we fathers are pretty sure they're chatting about us when we're not looking. At the end of a long day out, we ended up at Vatos, a nearby Mexican place. Vatos is fairly good, a little oversalted and overpriced perhaps. What I like is how they dunk their Corona bottles in the cocktails like that. A couple of them are sure to put you in a jolly mood. In which I was.

As for the future of Farrand dining, I can't see too many drastic changes on the horizon. We'll continue to eat what the seasons bring, while the Farrand ladies are sure to dine on strawberries whenever they drop below W5,000 per kilo.

See you next time!

Email ThisBlogThis!Share to TwitterShare to FacebookShare to Pinterest
Labels: Food in Seoul

Awwww! Baengy is a cutie pie! <3
And there's something about Korean food which makes me hungry... SO no thanks to you for making me feel hungry again! :P Oh that delicious food!!! Mmmmmm!

We were in Seoul earlier in the year and absolutely loved it. Can't wait to visit again :)!

Your blog peaks my interest, I'll come back soon!