On June 24th, 2013, five signatures from the weathered hands of five stoic Gatekeepers of the Tunnel Exit signed a document confirming acceptance of my doctoral thesis for graduation.
The document concerned is the middle page in the photo below. Looking at it now, it makes me wonder about the intangible connection between the climbing of Mt Everest and the value of a certificate, however humble, saying that one had done so. 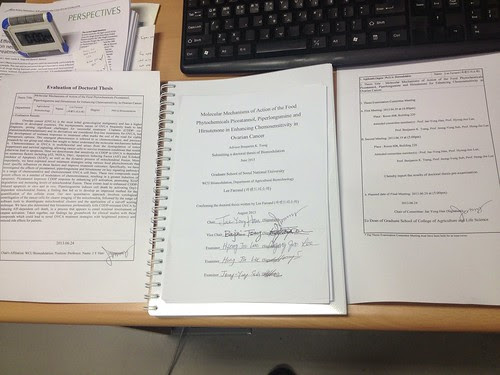 The moment itself was a favourable one. Immediately after my final defense session, I was courteously banished from the Room In Which The Decision Is Made for an indeterminable period of time. Sitting by myself outside, in the cumbersome unfamiliarity of a button-up shirt and tie I sat, involuntarily reliving the experience. The time was passed with minute self-critiques on how every rebuttal and explanation I provided could have been delicately improved. Feelings of quiet confidence began to seep into my conscious periphery with strangely unwelcome conspicuousness. When the stakes are so high, one does not dare to tempt the inestimable forces of irony with hubris.

When the door opened, I was welcomed in to the sight of all five professors on my assessment panel standing. I then received a handshake, and the words "Congratulations, Dr Farrand."

And that was how, after years of toil, it came to pass. Euphoric, no; but satisfying, yes. Whether it was worthwhile will be judged in the years to come.

I intend to post a more detailed summary of the secrets, scandals, rewards and woes encountered during my PhD at Seoul National University, at a later date. In the unlikely event that I do not do so, I would like to preemptively convey my conviction to our valued readers (some of whom may be graduate students), that no single attribute or philosophy is the key to succeeding. But patience and hard work are strong contenders.

I do not wish to belittle in any form the efforts of any of my colleagues who have yet to complete, or who have previously chosen to give up on their PhDs, of which more of my closest friends at SNU have than haven't. The undertaking of such a decision is considerable in itself, and it's simply unfair to claim that success is entirely dependent on personal determination. A myriad of adverse outside forces are incessantly at work, and they are unbalanced in their selection of whom they wish to provide a greater number of stumbling blocks for.

For those seeking some form of inspiration or guiding advice for graduation, I would say the following. In order to graduate from any doctoral course of considerable difficulty, one must jump through a dizzyingly vast number of hoops, each of which, although small, collectively represent the difference between Making It and Not Making It. These hoops are tasks to be completed, deadlines to be met, people to be placated and any number of other tediously repetitive daily minutiae. Some people quit after jumping through only a few hoops, others quit after jumping through nearly all of them. If you are destined to quit, then it will most likely be a single hoop or a very small number of them that represent your final judgement.

The ability to succeed is helped not by an accurate assessment of the number of hoops or the amount of stamina required, but by a transformation of perspective. There are too many hoops to realistically comprehend without experiencing a potentially fatal dosage of inadequacy. One must therefore think of oneself as an amateur hoop-jumper from the beginning, practicing to become a professional. The focus lies not in jumping through all of the hoops, but to become so accustomed to jumping that no matter how many of them there are, the task will always be achievable given adequate time. Just keep jumping. There will be more hoops after you graduate.

While I'm relieved and happy to have completed this chapter, I'm acutely aware of the contributions made by my kids and especially my wife, who has endured my late nights in the lab, absent mindedness and workload complaints over the years with patience and dignity.

And I also hope to get back to more frequent blogging. Even the cobwebs here that used to provide some macabre decoration for my blog have long been abandoned by the Google spider. During some of my late nights in the lab, especially over the past few months, I would open my blog, scroll through the photos and read friendly comments left by readers from bygone eras. It certainly helped to lift spirits.

But anyway, for now, these hoops are done. They're dusted.
And there will be more to come.

"Patience is bitter, but its fruit is sweet."
-Jean-Jacques Rousseau

Email ThisBlogThis!Share to TwitterShare to FacebookShare to Pinterest
Labels: PhD in Korea

Congratulations on making it!!! I can only hope that I'll have the same perseverance as you.

Congratulations! Looking forward to hearing what the next chapter will be!

It's quite an achievement. Hard to imagine all the work you must have put in as I currently sit in front of a computer trying to find the drive to write a two page reflection paper. Congratulations! Hope to see more blogging now that it's over!

Congratulations to you sir.

Thanks for the comments ^^

Congratulations! And I do agree with you, having jumped through those hoops myself. I've always felt that a Ph.D. was more a testament to one's perseverance than intelligence. It is not the smart that graduate, but the stubborn that do.

You're writing is, as always, perfectly worded. I'm so happy for you Lee! What a declaration of character you have just completed! Congrats and thanks for sharing!

Hello Lee and Heather, Congratulations Lee, my very best wishes to you for the future. As you said, patience and hard work are strong contenders. Not to mention the obstacle course that is SNU. We are so pleased for you and Heather, and your beautiful children-- in the big picture, they are the future. Hope to see you in Adelaide some time sooner or later.
Susan and Damien