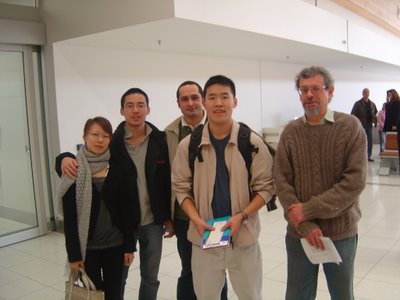 Today is Thursday and I left Adelaide on Tuesday. Here is the goodbye party that sent me on my merry way. On the left is Vivien, then Daniel, Raf, Me and Dad at Adelaide airport. Seeya fellas. 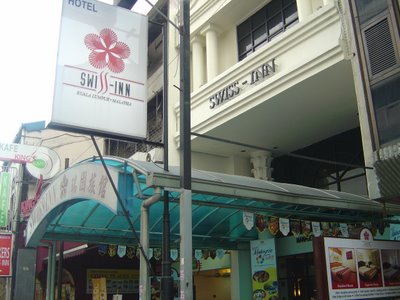 Back when I was planning my trip I decided that I should stay in Kuala Lumpur for a couple of nights seeing as I was stopping over there anyway and it wouldn't cost too much more. That was a good decision. KL is a really amazing fusion of Indian, Chinese and native Malaysian culture as well as being a crossroad of SE asia. There are plenty of people from all over the world here. This is my hotel, the Swiss Inn on Julan Sultan in Chinatown. It's a little expensive but decent and in a great location. One night is RM135 (1 Aussie dollar = 2.5 RM). Not too bad. 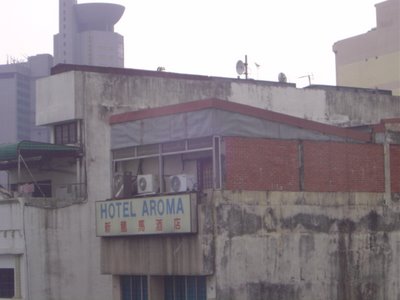 This the view from my hotel room. I was curious to see what was so aromatic about the hotel over the road, so I went over to check it out. The verdict? It smells like fish and carpet. 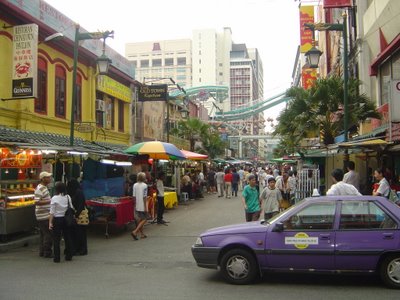 This is what much of Chinatown looks like. The air is humid and warm but bearable. The streets are lined with shops selling all kinds of cheap imitation stuff, interesting foods and souvenirs. They open in the afternoon, with mobile shops all setting up in a different location each day. Late at night they pack up and disappear, with an army of street sweepers cleaning up all the mess. In the mornings the streets are spotless and empty, before the process repeats itself. 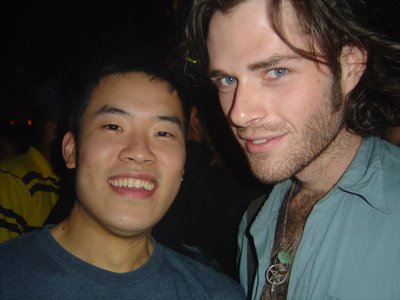 On my first night I wandered around the streets by myself looking for a bar. I found the Reggae Club on Petaling Street and saw this fellow sitting by himself. So I walked up and started talking to him. He's from Melbourne and his name is Alex. Alex is most definately a cool guy and is just coming home from his second 3 month tour of India, backpacking. If you're looking for decent conversation, talk to someone who has backpacked around India. Now me and Alex are good friends. 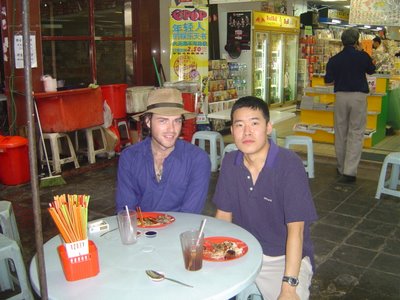 That night we went to a place called the Beach Club and I ended up getting superbly drunk and buying everyone drinks. It was a good place and I'm sure it was a lot of fun, but most of what happened that night I found out from what Alex told me the next day. I wandered out on the streets in the afternoon looking for food and there he was sitting at a food stall. If you look carefully, you can see that one of us is much more hungover than the other. 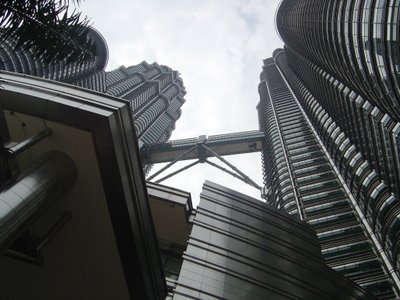 That day (yesterday) I decided to go out on a little daytrip into central KL. These are the KLCC towers, huge buildings that sit in the middle of KL and just sit there being huge. They don't do much apart from that. I went inside and saw a shopping mall too. That was similarly enormous. But in the end it was nothing more than a giant shopping mall so I didn't take any photos. 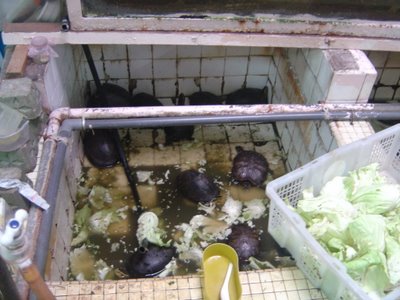 So I went back to Chinatown and had a poke around. This is a pet store near my hotel and in the water there you can see turtles eating cabbage. The water was a bit dirty but I guessed the turtles were happy because they were smiling. There were also hamsters and scorpions for sale. 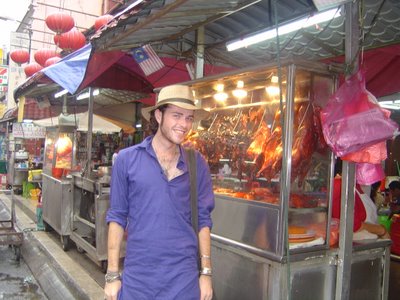 Food in KL is incredibly varied and ranges from being somewhat questionable to very delicious. More often than not, it's really good. Alex and I ended up eating every few hours at somewhere different. Here he is standing in front of a duck stall. Alex eats a roast duck by itself with no rice, because apparently in India he ate so much nutritionless food that he now has an insatiable craving for meat. He's happy now because he just ate. 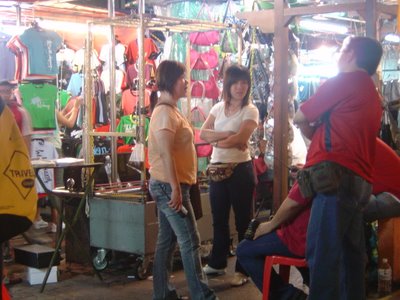 These are the Chinatown market stalls at night. Bargaining with stall owners is an essential part of the shopping culture. If your English is good, expect the price to be inflated by about triple. I usually manage to get the price to about half of that, but judging by the smiles on the shopkeepers faces after every purchase, I think it's an artform I have yet to master.

You can see the lady in the photo holding a walkie-talkie. A lot of the owners have these. Alex told me that there's a kind of syndicate of boys that patrol the market streets and they lookout for cops. When the cops come out for a patrol, the shopkeepers who subscribe to this network are warned through their walkie-talkies and they scramble to hide their imitation merchandise. The stuff they hide depends on what's happening with the unseen forces of market politics. Say if Nike wanted to crackdown on imitations, the company would pressure the associated politicians, and for a time thereafter it would be imitation Nike merchandise that the police would be searching for. Then after a month or so, it would turn into something like Gucci and everyone would start hiding their Gucci, and Nike stuff would be fine again. It's a bizarre and curious situation, but sure enough I later witnessed a mad walkie-talkie scramble and shortly after, a patrol of six well dressed policemen came wandering through, scanning the wares of the shops. No one got into trouble. What were they looking for that night? Pirated DVDs apparently. A whole bunch of storekeepers stuffed all their DVDs into boxes and other guys ferretted them off into buildings at lightning speed. I couldn't help laughing at the innocent smiles on the shopkeepers faces as the police passed by, but I'm sure the cops are well aware of what's going on. 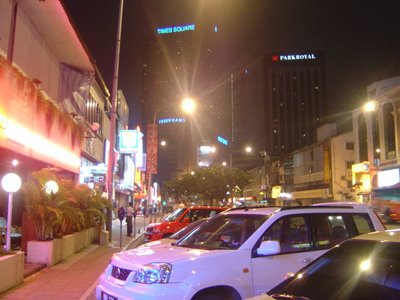 This is another part of KL near Times Square that I was at last night. It's much cleaner here but there are less people. I still managed to see two rats run from a gutter and into an open restaurant though. No one in the restaurant even flinched. 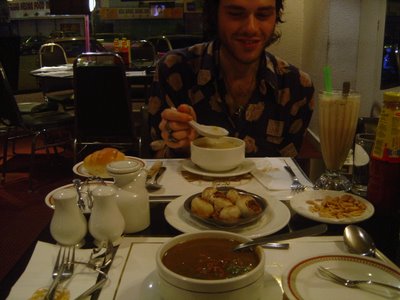 This is the restaurant we ate at last night. Alex is leaving to Pangkor today and I'm off to Seoul, so we decided to eat somewhere fancy because it was our last night in KL. We had a huge dinner in the end and it only cost us about AUD$50. On the table I'm having oxtail soup, while Alex is having crabmeat soup. In the middle is a dish of Escargots (snails) cooked with garlic. I hadn't tried them before but they were interesting. Kind of like oysters but with less flavour. One was enough for me. I won't be ordering them again in a hurry.

Well that's it for my KL entry! Malaysia is a truly fascinating place and I will most definately be coming back someday. Next entry I'll be blogging from Seoul and I'm really pumped, even though I've had only a few hours sleep. It must be something in the water.
Posted by Lee Farrand at 1:57 pm