One week in Seoul

Well I've spent one week in Korea now. Here is a snapshot of what I've accomplished thus far:

Days in Korea: 7
Nights spent drinking: 5
Average hours of sleep per night: 5
Number of Korean BBQs eaten: 5
Number of days it took me to learn how to use the subway: 1
Number of times I've been lost for more than 2 hours: 2
Number of pirates met: 1 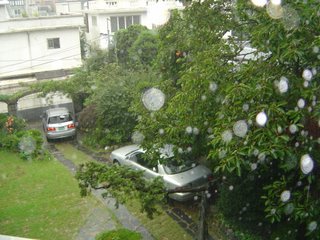 It's been raining a fair bit in Seoul lately, as you can see from this shot I took from upstairs in Koroot. The rain here is different from Adelaide's, it pours heavily for hours on end instead of clearing up frequently. The droplets are large and heavy as well. I didn't buy an umbrella for a while and just tolerated being a bit wet when leaving the house. But then someone told me that the rain here is acidic and can make your hair fall out. Now I have two umbrellas. 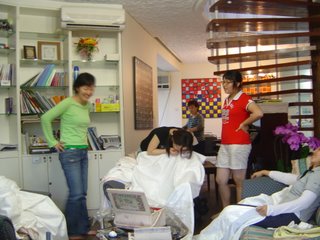 I generally shy away from racial stereotyping, but during my time here I've found Koreans in general to be hilarious people. Here are the Koroot volunteers making curtains for the guesthouse. After a couple of hours work, these four nice ladies realised that they had sewed the curtains the wrong way. That lady in the middle is undoing the stitching with her teeth. 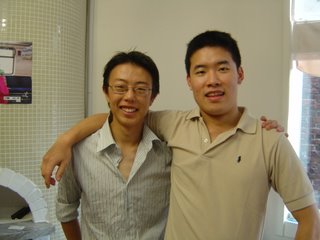 Look who recently moved in. Adam is from the Netherlands and he's met Guus Hiddink in person. He was in an advertisement with him for a pizza chain and got to hug him. That is why I'm hugging Adam. So now in a way, I feel like I've also hugged Guus Hiddink. 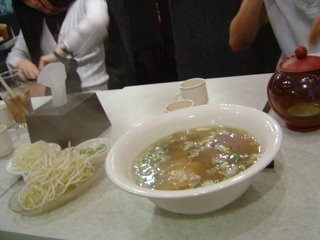 We found a Vietnamese beef noodle place last week. I've heard that some of the other places are decent but this place was a bit shoddy. The waitresses were wearing Konglish (Korean-English) superman uniforms and one of them looked like she wanted to kill herself and was fairly rude. She even made Eric swear in French. The noodles were even worse. They weren't fresh, the chilli sauce was watery, the soup tasted like it was made from instant noodle base and the couple of pieces of beef in it were small and chewy. But the tea was nice. 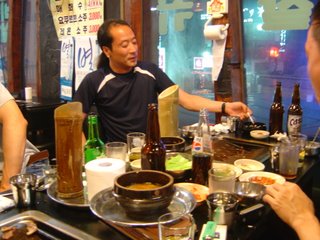 A typical view of a BBQ session. Two points of interest: (1) The bamboo containers you can see are filled with a kind of sweet soju (2) There's toilet paper on the table and on the wall. They use it for paper towel here, but the funny thing is that it's not usually found in public toilets. You need to carry your own. 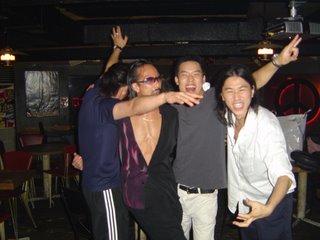 BBQ sessions always evolve into something more exciting. Here we are in a rock bar called The Door, singing to none other than Money Talks by AC/DC. If you look closely it seems like we've been drinking. 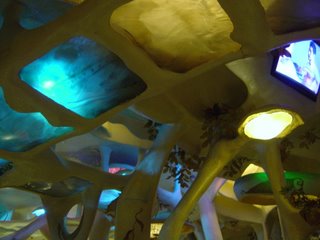 This is the ceiling in a different bar in Sinchon, called Mu bar. Those coloured panels are actually the transparent bottom of a stream that constantly runs overhead. The whole place has a kind of foresty feel to it and when you're in the toilets you get a good view of the place. 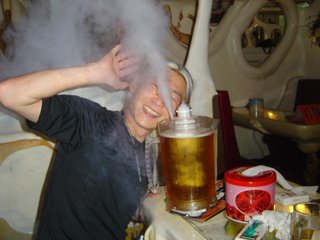 This is Thomas posing with a pitcher of beer that you can buy in Mu bar. The middle section has water and dry ice in it and keeps the beer cold while pouring out mist. See that pink tin on the table? It's got toilet paper in it. 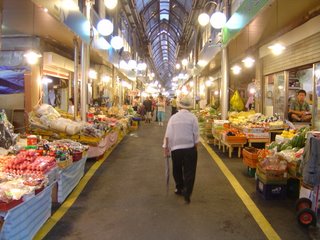 And here is a market street near Koroot. The atmosphere is a little more pleasant and less busy than the markets I saw in KL. You can buy everything here, from live eels to already-boiled eggs in egg cartons that are indistinguishable from non-boiled eggs.